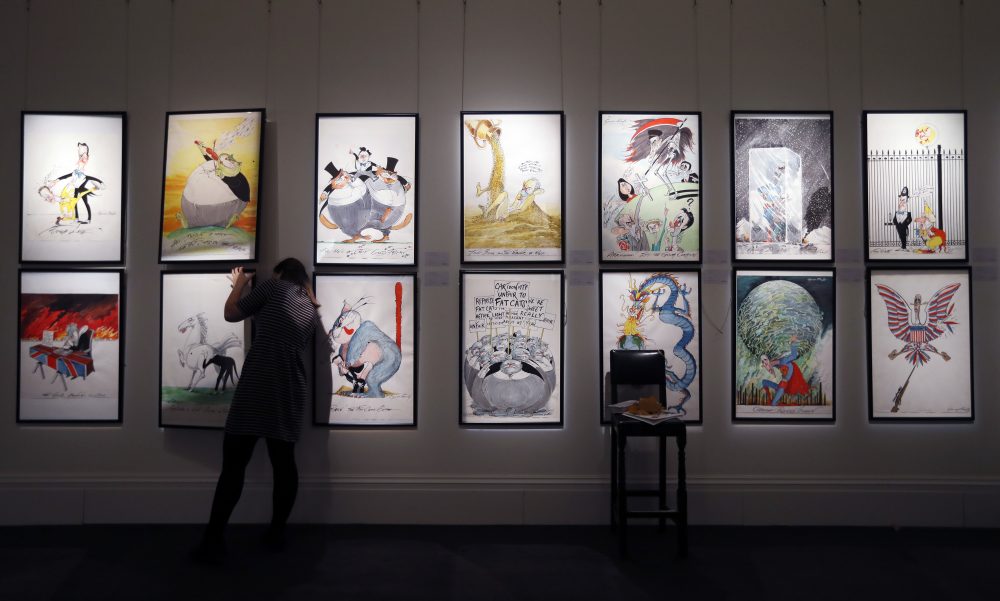 An art auction at Sotheby’s in London. ArtOpen aims to make the process of evaluating and buying art more accessible. Photo by Kirsty Wigglesworth/Associated Press.

The art trade broadly, and art criticism more specifically, badly need a Reformation. The institutions of art are too much like the medieval Catholic Church.

Just as the Church has always been run by a tiny group of white men who have the power to determine what is worthwhile and what is not, the art trade’s tiny group of “influencers”—gallerists, managers, a few artists, high-end high-visibility collectors, publicists, and critics—largely determine which artists are in, which receive accolades, which make millions. Charles Saatchi, when he was a high-profile, admired influencer, almost single-handedly “made” the Young British Artists when they were unknowns. His purchases encouraged other collectors to follow, thereby inflating the value of what Saatchi had already bought before it was hot. Now the Armory, Frieze, and Art Basel art fairs are so influential as to leave others in the dust. Galleries do the heavy lifting in terms of publicizing, and get 50 percent of sale prices, while largely determining which artists make it. Note that this is less about the objective qualities of the art, if examined in a vacuum, than about influence, PR, hype, and muscle.

Art criticism is the same, just without the money. Old-school art critics, those with a prominent voice through columns in the right newspapers and magazines, get to choose what is good and what is not (though this most often manifests in shining a light on select artists and ignoring the others, which in PR terms is worse than giving them negative reviews). Criticism is least interesting when the critic decides what is good and bad, while it is at its best when it explores a work and then allows you to decide.

The former type of criticism results in petty territorialism all too often, with ideas and arguments bouncing around the squash courts of peer-reviewed journals, without reaching the public at large. It amounts to preaching to the converted or to those in “rival” pulpits.

The Reformation that opens up art and criticism to the masses, to the audiences for art, is not yet upon us, but its harbingers can be heard.

Take, as one wonderful example, a project funded initially by the Slovenian Ministry of Culture. It is a beta version of a website, by the name of ArtOpen, and it has been a modest success. Founded by a few Slovenian artists, the concept caught on and spread, with international users from the United States to India signing up within the first few months. It is run on a volunteer basis for the time being by its founders, with hope that the Ministry will continue to fund its expansion.

The principle of ArtOpen is this: It opens up art criticism and trade to anyone around the world, of any background. All you have to have is an interest in art and a willingness to engage and share your opinion.

Here’s how it works: Artists create social media-style profiles and upload their art to the site. Other users can create profiles without uploading art. Then all of the users can vote, each month, on their favorite art that was uploaded, in various categories (works on paper, paintings, graphics, etc.). The process includes a jury of some arts professional and experts (I’m one), but every user, regardless of expertise, has the same vote. Evaluations of the art are made based only on digital images, which is of course not ideal—truly great art should be seen in person. But since this is logistically prohibitive, digital is an adequate solution.

In the past, I’ve described ArtOpen as a Tinder for art lovers, which proved to be apt. In the future, ArtOpen plans to be available in a Tinder-style app.

Whichever art has the most “likes” wins that month and is a candidate for Artwork of the Year. ArtOpen has recently begun to allow users to sell their art directly through the site, receiving 100 percent of their asking price. ArtOpen adds a 20 percent reservation fee to the author’s price, paid for by the buyer, auction house-style.

You can argue about ArtOpen just like you can argue about art. But the site undoubtedly cuts out the middle men, the critics who like to shape opinion and the gallerists who do likewise for their 50 percent fee.

The naysayers will argue that allowing the masses to decide is, in theory, good, but doesn’t always result in the cream floating to the surface. That is a sound argument, but one that suggests that the masses need to be better informed, rather than that decisions should be kept away from them. And a tool like ArtOpen can be one method of better informing the masses.

Reformations are good things—the religious one decentralized and democratized Christianity—and the empowerment of the 99 percent can only be progressive. Art should be opened up.