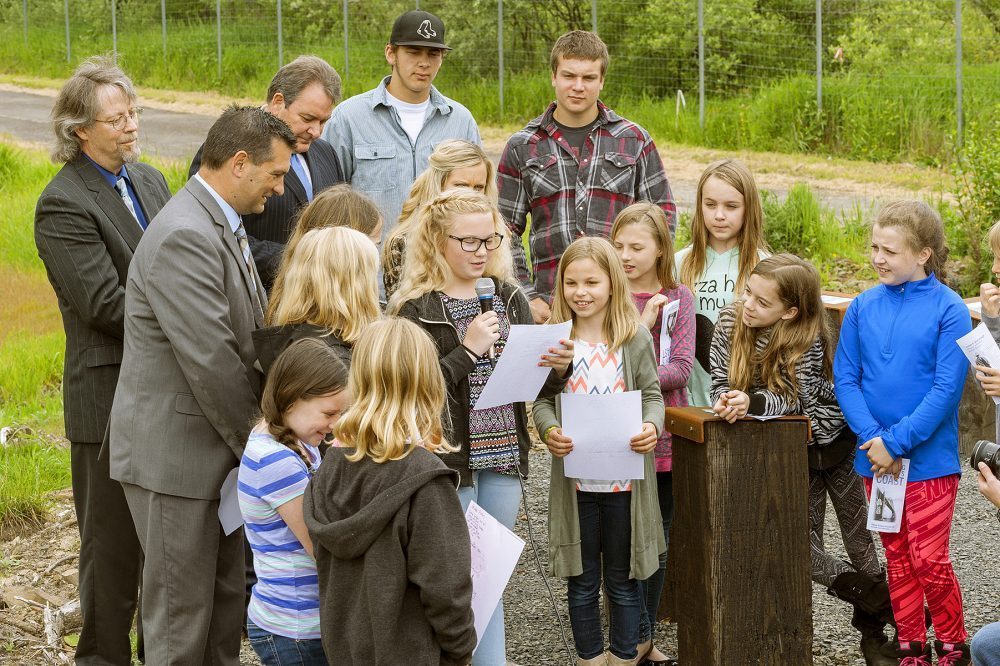 Students participate in Poetry Out Loud, a national contest that last year drew 365,000 high school students from all 50 states as well as the District of Columbia, Puerto Rico, and the U.S. Virgin Islands. The contest is a partnership among the National Endowment for the Arts, the Poetry Foundation, and State Arts Agencies. Photo courtesy of Flickr.

Last year, approximately 365,000 high school students participated in Poetry Out Loud—memorizing and reciting poems in organized competitions held across all 50 states as well as the District of Columbia, Puerto Rico, and the U.S. Virgin Islands. By almost any standard, Poetry Out Loud constitutes a huge success in a period when cultural success stories seem rare.

In retrospect, successful ventures often seem inevitable. But it has been my experience that excellent notions often fail to take hold and prosper, especially in the arts. For that reason, it may be helpful to provide a short history of the program, explore its rationale, and discuss some decisions that led to its ongoing success.

Originally called The National Poetry Recitation Contest, the now more evocatively named Poetry Out Loud is a partnership between three very different sets of organizations—the National Endowment for the Arts (a federal agency), the Poetry Foundation (a private non-profit), and State Arts Agencies (state government bureaus). The NEA created the program’s curriculum and materials in collaboration with the Poetry Foundation, and it distributes them free to all participating schools.

Students choose the poems they wish to memorize either from the free classroom anthology or the Poetry Foundation’s special website, which offers 700 diverse selections. Beginning with classroom competitions, winners advance to individual school contests, then to city, regional, and eventually state finals. The state winners come to Washington, D.C. for the national finals.

There are prizes and certificates awarded to winners at each level, with the largest prizes distributed at the final competition. The national champion receives a $20,000 scholarship, with second prize earning $10,000 and third place $5000. The national champion and several finalists usually return to Washington to perform in the NEA’s literature pavilion at the National Book Festival.

Poetry Out Loud began at the NEA as a personal project. As the first poet ever to chair the agency, I was concerned about the declining audience for serious literature, especially poetry. Having grown up in a working-class home where poetry was enjoyed and recited, I had never accepted the notion that poetry was an elitist art whose pleasures were available only to intellectuals. I had long felt that poetry’s diminished popularity was at least partially due to the way it was taught. One can learn many important things about a poem through critical analysis and term papers, but simple enjoyment is usually not one of them.

When I look back on what created my own appetite and appreciation of poetry, two early experiences stand out. The first was my mother’s habit of reciting or reading poems. She was a Mexican-American raised in brutal poverty who had never gone beyond high school—exactly the sort of person the literary establishment usually assumes has no interest in the art. She knew dozens of poems by heart—Poe, Byron, Whittier, Tennyson, Kipling, and Shakespeare as well as mostly forgotten popular writers such as James Whitcomb Riley, Ella Wheeler Wilcox, Robert Service, and Eugene Field. It took me years to understand how deeply her favorite works connected to the private joys and sorrows of her life.

The second experience occurred a few years later in eighth grade under the tutelage of Sister Mary Damien, a small but formidable nun. One day early in the school year, she complained that she could hardly understand a word I said and told me to stay after school. There I discovered that I was not the only notorious mutterer. I found myself with three other boys—all of us Mexican-Americans raised mostly among non-native speakers.

We expected to be yelled at. Instead, the assiduous sister announced that we needed basic elocution lessons. Three days a week after school, she worked with us to improve our speech. The lessons soon took the form of listening to recordings of actors reciting poems and then memorizing and performing the poems ourselves. She pushed us to achieve the same clarity of speech and emotional expressivity as the actors. In that pursuit we failed notably, but we did improve greatly from our mumbly beginning. More importantly, we loved hamming it up and belting out Tennyson and Shakespeare. Without knowing it, she also nudged me toward a life of poetry.

What strikes me about both these life-changing encounters with poetry is that neither came from a book. They were primarily oral, auditory, and performative. Poetry was a social rather than solitary activity—something to be shared with family and friends.

For most students, the impact of participating in Poetry Out Loud is not solely or even primarily literary. The program resembles music or sports more than English class. Poetry Out Loud revives the ancient art of memorization, which was a central element of education until very recently. By studying and reciting poetry, students learn to master language as well as develop skills in public speaking. This practice also helps builds their self-confidence and expands their knowledge of literature.

The very process of reading through many poems to find the right ones to memorize can prove a catalytic experience for many students. Choosing the right poem may even help some students address inner needs of which they are not yet entirely conscious.

Culture is not a marble museum; it is human energy. The true value of Poetry Out Loud is the sound of a young man or woman speaking the words of a poem he or she has chosen to learn by heart. Standing in a classroom or auditorium, … the student momentarily becomes the embodiment of culture.

Poetry Out Loud began as an idea for a national recitation contest, but ideas are fragile things. To grow into something large and effective they must be developed carefully and subjected to ongoing critical evaluation. Any national program needs to be tested locally before it is expanded. The National Poetry Recitation Contest, as the program was initially called, first reached the public in early 2004 as two pilot programs in Washington, D.C. and Chicago. Only one of the tests succeeded.

In Chicago, the competition was established as an after-school program. Without the regular structure of English class and the oversight of teachers trained in literature, the program lost focus. The participation and public response were so poor that the Poetry Foundation felt that the program probably did not merit further investment.

Meanwhile in Washington, Daniel Stone and Cliff Becker of the NEA conducted a pilot program in ten local high schools. Teachers took ownership of the program, and it proved an immediate hit with students. Participation exceeded our highest expectations with over 4,000 students entering the competition and teachers enthusiastically embracing the idea.

As the Washington finals approached, we learned of the poor results of the Chicago test. I phoned John Barr, the President of the Poetry Foundation, and asked him to fly out and see the Washington finals, which were to be held in the Folger Library’s elegant Shakespeare Theatre. We wanted him to see another city before making his final decision. Barr graciously agreed to come.

That evening in the Folger, the 10 finalists took their turns on stage reciting Yeats, Donne, Dickinson, Pound, and Brooks and the audience was reminded of the primal magic of poetry. There was nothing dutiful in the recitations. Some students performed better than others, but they all displayed a significant quality in common. The students quite literally embodied the poems, and the authenticity of their connection to the words was often startling.

The Folger audience was visibly engaged from start to finish, something I have noticed consistently at all Poetry Out Loud competitions. There is a special attention people—both competitors and spectators—bring to competitive activities. That evening I noticed something else that has struck me at every subsequent competition I have attended—namely how diverse the finalists were. They came from every cultural and ethnic background with a disproportionate number of first-generation Americans. They also comprised every type of high school kid—jocks, scholars, actors, debaters, slackers, class clowns, hipsters, and loners.

Having escaped one cancellation notice, the program soon faced another. The Arts Endowment felt that the best partners for the competition would be the State Arts Agencies, the official public institution in each state dedicated to arts and arts education. The state agency executive directors listened to the idea positively—not with great enthusiasm but with interest. But the state arts education specialists insisted that students would not willingly memorize poems, that teachers would reject memorization as an antiquated, even repressive technique, and that competition was anathema to arts education. They suggested that the NEA should create a program in which students would gather to read their own original poems without judgment—“no winners or losers,” one specialist said, “just sharing.” We worked very hard to build a consensus to go forward.

Once the national program got underway, the negativity almost immediately vanished. Initial participation was excellent with 100,000 students competing in the first year. Reacting to the competitive nature of the program, the media gave Poetry Out Loud the level of attention it usually bestowed on school sports. Many State Arts officials, whose good works had mostly gone little noticed for years, excitedly reported that mayors, state representatives, and even governors had become enthusiastically involved in the competition.

Poetry Out Loud demonstrates that large and ambitious literary programs of the highest quality are still possible. Properly planned and executed, they can succeed with both artistic integrity and broad democratic reach. There is now so much fatalism among American intellectuals and academics about the decline of serious literary culture. Poetry Out Loud demonstrates that a hugely popular program can be launched and sustained nationally—even on a relatively small budget.

Poetry Out Loud has also expanded the conventional strategies of literary funding. Before Poetry Out Loud, virtually all of the Art Endowment’s support for poetry focused on assisting its creation—fellowships for poets and translators, subsidies for presses and magazines, artists’ colonies, poetry organizations, etc. However, the audience for poetry has declined substantially. Between 1995 and 2002, for example, the percentage of the U.S. adult population who read any poetry fell by an alarming 30 percent, from 20.5 percent to 14.3 percent—almost one third of the audience vanishing in less than a decade! The 325,000 students who participated in Poetry Out Loud probably constitute a group almost as large as the core adult readership of American poetry. As the program continues across the next decade, its alumni will number in the millions.

Culture is not a marble museum; it is human energy. The true value of Poetry Out Loud is the sound of a young man or woman speaking the words of a poem he or she has chosen to learn by heart. Standing in a classroom or auditorium, among friends and family or strangers and competitors, the student momentarily becomes the embodiment of culture. Poetry has no better bridge between past and present, poet and audience.