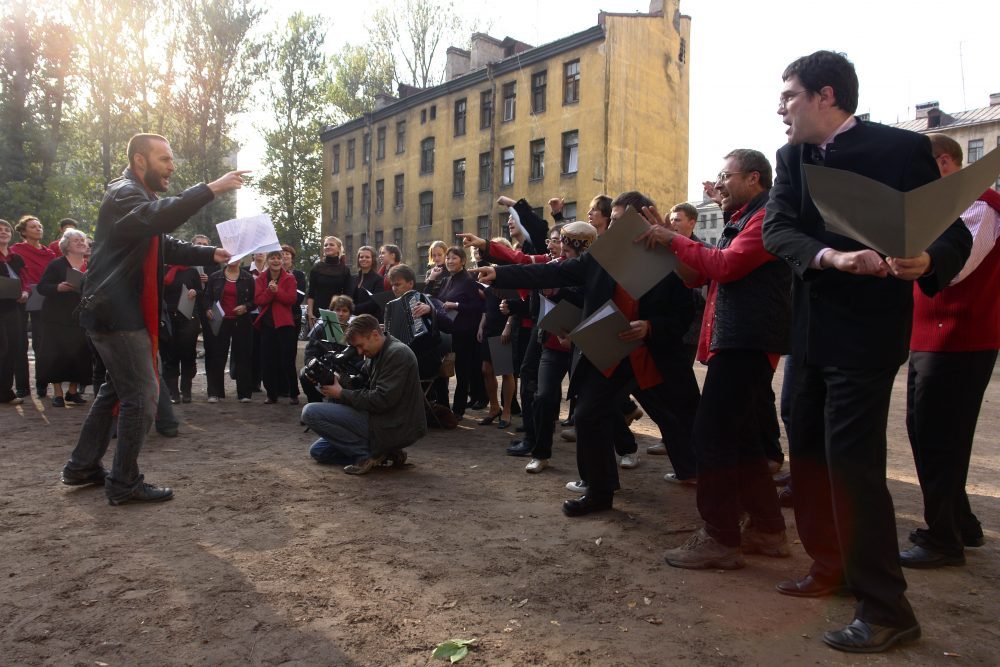 Lift every voice and kvetch! The Complaints Choir of St. Petersburg, 2006. Photo courtesy of Yuriy Rumiantsev.

A little more than 10 years ago, someone emailed me a video of the Helsinki Complaints Choir, a group of people very seriously singing about complaints that were both mundane and funny and large and significant. I watched it over and over. A few years later I saw a film about the artists behind the group, Tellervo Kalleinen and Oliver Kochta-Kalleinen, who were organizing Complaints Choirs in other countries, including Singapore. Their work took on a profound and even political air. Zócalo Public Square talked recently to Kalleinen about the “serious play” of making art from conflict, grievance, and rhetoric. A condensed and edited transcript follows.

Q: What project are you working on right now?

I’m here in Amsterdam working with my partner, Oliver Kochta-Kalleinen. We’ve done our major projects, which are all participatory, together. Recently, the Dutch art organization TAAK wanted to put on an outdoor exhibition that looks deeply at questions of well-being and how artists see that.

We decided to build a Temporary Pavilion for Permanent Negotiations, a participatory project that focuses on conflict. We went out interviewing people to get their true stories of conflict: life, work, neighborhood, or town. I’m interested in the moment when negotiation turns to conflict. And how some people really actively deal with conflicts so that there was some kind of transformation in the end that felt meaningful to both parties.

We build a sandbox. The audience sits around the sandbox and the facilitator tells the story of a conflict—but the situation makes it sound like a fairy tale. The adults are sitting like children in the sandbox listening to the stories. As you hear the story you don’t know what you think, or whose side to take in the conflict. It’s actually really interesting to hear what happens when people really commit to solving a conflict and from somewhere they find the energy to really deal with it instead of ignoring it, going to court, or moving on, or whatever. There is something in this question of the potential of a conflict that feels very urgent at the moment. We wanted to do a work that actually gives hope, and like always in our work, there is also humor.

Q: In this work I can see your interest in groups, and in how people get along, and in experiences that bind people together. Do you have a manifesto?

We don’t have a manifesto. Often when we work it starts with an inner dialogue that feels urgent. It’s always a learning project for us, which keeps the dialogue with participants healthy because we are not teaching. We invite the others on a journey with us, so that it’s a true process for everyone. I often don’t know what it’s about exactly until the end of the process.

The Complaints Choir started when Oliver and I were on a walk talking about how much people complain. Oliver grew up in East Germany and moved to West Germany and has lived all over. He said, “It seems like people are always complaining no matter what the society is like.” So this interest in the phenomenon of complaining started us down the path to making work that somehow deals with this question.

Now I could give a lecture on what I’ve learned about complaints—it’s taught me so much.

Q: Do you always work with groups?

It’s extremely seldom that we work with existing communities or groups. If we label people as a community that can be problematic, because who are we to say they are a community? Usually in our works people form a temporary community—like in the Complaints Choirs—and they actually become a true community from their commitment to the project.

With the complaints choirs, we start as individuals with our complaints and then go through a process where we democratically choose which complaints make it to the song, and then there is really hard work, the challenge of creating and practicing the song. Not everyone has experience singing. The process is designed so that it supports community building–for example we eat together after every rehearsal.

The moment that we actually become a group is when we have the first performance and the audience sees us as a group. It’s really a magical journey from individuals into the group.

Q: Are you intentionally engaging with ideas about democracy?

We are very engaged with the deeper questions of what it means to participate in society. One reason we make art is to invite people to experiment with collective processes. It’s not just about art or processes—it’s about, how does designing a process make a big impact on whether people feel seen and heard in decision making?

The question of democracy is something we should all keep asking—how can we make it work better, so that it’s not just a majority vote? How can this process be defined better?

I feel that art is a playground of ideas which can feed the deeper processes in society. As artists we are seriously playing—having a session in a sandbox—but using it to talk about something deeper.

Q: Is all your work open source?

Oliver is very deeply involved in the open-knowledge movement and I myself also find a lot of value in the general sharing of knowledge. I appreciate a generous attitude toward the world—share ideas, and don’t feel guilty about being inspired by others.

There are different levels of open source, with different amounts of rights. Complaints choir is open sourced also as a concept: We give instructions for making your own. Sometimes people don’t even tell us. We’re always discovering new complaints choirs … and that’s all fine and beautiful. There are more than 150 now.

Some projects, like movies which we made with participatory methods, are not labeled open source because we don’t want people in the movies to find themselves in weird places. We license every project differently depending on what feels ethical with that particular project.

Speech Karaoke is an event in a club where people get on stage and give one of 300 speeches from a prompter—as though they are singing a karaoke song. It was invented with a group of artists eight years ago.

When you go in front of people and speak a speech (from another time or person’s perspective) it’s actually very powerful. We have collected 300 speeches now: We thought it was really important to have iconic speeches from history, but also less known speeches from local places. Like with Complaints Choir, this combines very different levels of human problematics into one piece with different existential questions in dialogue with each other. In Speech Karaoke you might go from a wedding speech by a Swedish prince to a speech by Jesus or Hitler. It creates a global consciousness and a feeling of empathy or at least curiosity when you’re connected to different people and cultures through time. It’s also very much about the power of words—the ability to manipulate and influence, which is very important to be aware of when there’s an information war going on.

You asked about a manifesto. In our works there is a repeating dialogue between our basic needs as a human being on a personal level and how we relate to the global crisis. How are these things in dialogue with each other? What space do we have to negotiate?

When we started the Complaints Choir I had a negative attitude about complaining about small things. Through this process I learned to understand how necessary it is to not only talk about big existential world problems but also to be merciful towards oneself. In this world where you feel like you should be helping the crises of others, how do we celebrate the gift we are given?

Q: The Complaints Choir starts with people complaining about the toilet paper roll not being replaced, but then the complaints become something very profound and political. When I saw the film about the choir in Singapore, where people were not able to complain, I understood what it was to be Singaporean in a very different way.