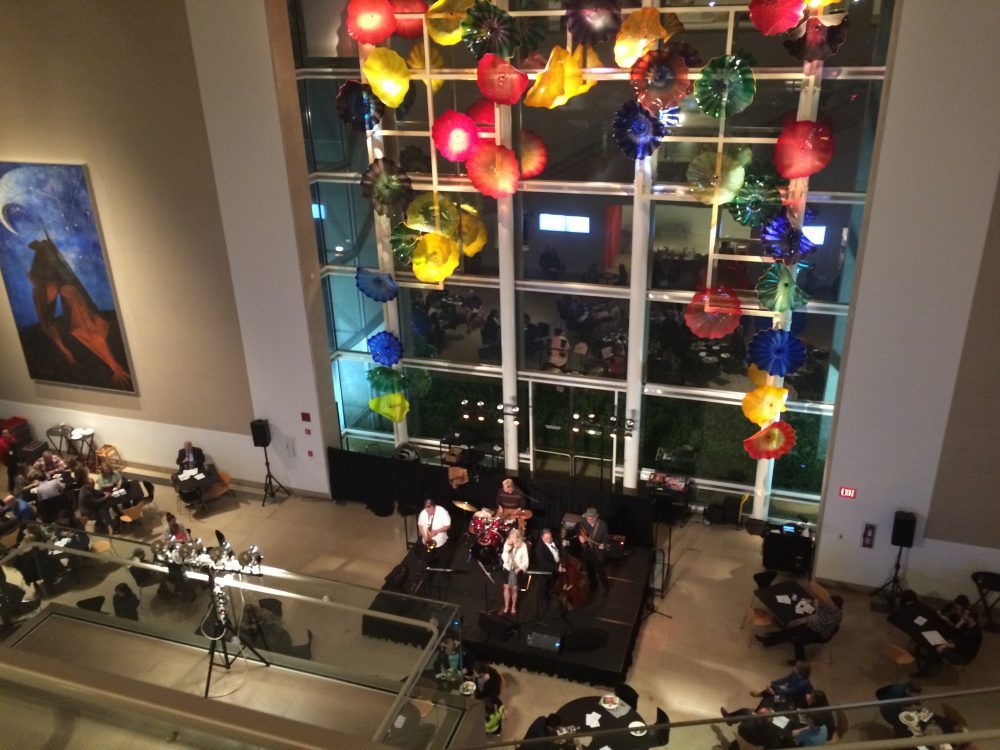 A 2014 program at the Dallas Museum of Art. Photo courtesy of Justin Grimes/Flickr.

Experiment—constantly and fearlessly, every single day.

That’s the best advice I can offer from my own career working in museums to connect the arts to different people, communities, disciplines, and places. The art of arts engagement flows from this recognition: Because the arts connect to so many things, artists and arts organizations need to always be trying new things.

I’ve tried everything from giving museum tours in the middle of the night to using artworks to help medical students develop their powers of observation. Experimentation naturally produces failures. But experiments are also fun, and allow you to experience, over and over, the three stages of learning once outlined by the English mathematician and philosopher Alfred North Whitehead: romance (as you pursue a new idea), precision (as you learn how your experiment works in practice), and generalization (as you extrapolate from the results of your experiment to broader lessons).

My interest in experimentation may be the result of a peripatetic life that allowed me to see all kinds of arts in all kinds of places. I grew up in Provincetown, Massachusetts, an artists’ community back in the mid-20th century. We lived across the street from the Walker family, who established the Walker Art Center in Minneapolis, and my parents took me to art museums on the East Coast. Because I am dyslexic, reading is not my preferred method for learning, and that made museums even more special—because they excel at educating through observation, listening, and imagination.

I joined the museum profession in the early ’70s, when there was a mandate to increase the educational role of institutions. I worked in Winnipeg, New Orleans, New York, Seattle, and San Francisco, and got to see even more museums during the 12 years that I spent on the accreditation commission for the American Alliance of Museums. I also spent time at the National Endowment for the Arts and the National Endowment for the Humanities.

By the early 1990s, I had drawn some conclusions: Museums had become isolated from their communities as the country had become more diverse and sprawling, and museums didn’t know what to do about the lost connections. In 1992 I prepared a report called Excellence and Equity: Education and the Public Dimension of Museums. It argued that museums needed to start trying new strategies to build new communities of support. To do that, they would have to restructure themselves, breaking down internal divides (among curators, educators, fundraising and marketing professionals, etc.) so that everyone was collaborating with a shared mission to serve the public. This wasn’t a popular idea then—I got chewed up by critics all over the country for a couple of years. 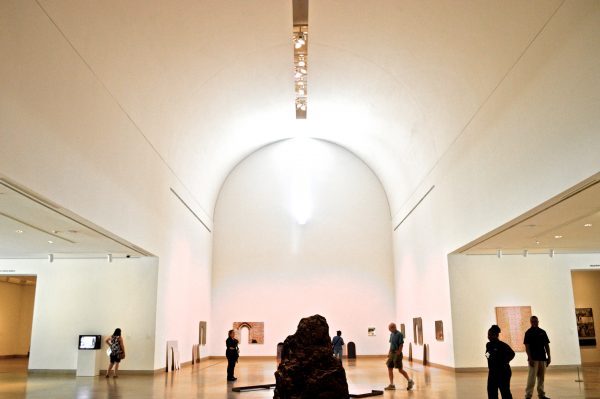 The entrance of the Dallas Museum of Art. Photo courtesy of Edward Larrabee Barnes/Flickr.

Then in 2000, Jack Lane, the director of the Dallas Museum of Art, and his board gave me the opportunity to create change in their museum and community.

It took a while to understand why more people weren’t coming to the museum. I conducted 42 town meetings—informal gatherings really—around greater Dallas to understand what the museum was doing or not doing. We also received funds from a foundation for a comprehensive study, lasting seven years, of how people interact with the arts and the museum. How, we needed to know, do we take a community that barely knows we are here and have them fall in love with the possibilities of the museum?

We needed the entire museum on board. We brought together everyone—curators, educators, marketing, researchers, development, even the security guards—to meet and come up with experiments. Whenever we got a new report on the survey, every single person on the staff received the results. We needed to make many small changes, starting with putting up more signs outside and around the museum, since we learned that many people couldn’t find it when they came to downtown Dallas. But we also tried new approaches to exhibitions, education, programming, and marketing. The idea was to try things that would be comprehensive across the museum.

At the beginning of the study, we had a standard museum audience—older, white, and interested in art. Years later, after changing the way we presented and engaged our audiences, we carefully studied people who came to our popular J.M.W. Turner exhibition and learned that it drew a younger and more diverse audience than the normal museum show. Demographics were not the defining issue for engaging our audiences. Instead we learned that our audience consisted of four different clusters or groups, distinguished by different ways they came to engage with the art in the museum. Those four groups were the Tentative Observers, the Curious Participants, the Discerning Independents, and the Committed Enthusiasts. We sought to reach and engage them all.

There were too many experiments to mention them all here. (The DMA documented its research and experiments in a publication, Ignite the Power of Art: Advancing Visitor Engagement in Museums, in 2010.) We brought chamber musicians and poets into the galleries. We presented joint programs with the symphony and theater companies. Members of our local Indian community, with the help of Hindu priests, assisted us in dressing statues of Shiva and performing and teaching dances. We invited in people who collect gold to share their samples and knowledge about this metal in front of art from ancient America.

And we experimented with museum hours. One of our most successful efforts involved opening the museum until midnight monthly. We would stay open for 48 hours to celebrate the closing of a major exhibition. I enjoyed this personally—I’m a late-night person, kind of an insomniac. I gave tours on many nights between midnight and 2 a.m., and had 75 or more people in the group. We would roam all over the museum and visit my favorite things in it. You’d get these incredible collections of people at that hour—parents with colicky babies, bus drivers and taxi drivers, physicians, and more than a few people with cancer or health problems that made it hard to sleep.

Yes, I went too far, more than once. I’ll never forget the time we booked an African drumming group. … The sound disturbed some visitors—and it threatened the art, since I had failed to brief the drummers on the fact that they needed to stay at least 3 feet away from the paintings.

When we celebrated our 100th anniversary in 2003, we were open for 100 hours without closing the doors. Indeed, our trustees manned the doors, working as greeters and guides for the occasion. During that stretch, we hosted 150 programs, of all types, in which local people shared expertise that related to the museum and its art in some way. Some 45,000 people attended during those four straight days of open doors. After that response, we did even more with artists and the community. Once we had an opening with 600 artists involved. Many gave presentations. Family and friends came. These were joyous occasions and they created what engagement is about—a visceral connection between art and people.

Yes, I went too far, more than once. I’ll never forget the time we booked an African drumming group. The drummers wandered through the whole museum; their thunderous sound filled the entire place. The sound disturbed some visitors—and it threatened the art, since I had failed to brief the drummers on the fact that they needed to stay at least 3 feet away from the paintings.

There was so much more to do with the amazing and creative staff of the museum, but I developed chronic illnesses and had to leave the museum in 2012. Today, though, I still experiment with new ways to connect art to the world around us. For the past eight years, I’ve made a practice of doing something new every day and writing about it. Museums are great places to do something new—which often involves the celebration of little things, making new connections, and finding creativity. (You can follow this practice on my Instagram.)

I’ve also tried to take advantage of my deep familiarity with the health care system by looking for ways to combine art and health. After leaving the museum, I joined the University of Texas at Dallas as a Distinguished Scholar in Residence, where my work is focused on art and medicine. I’m researching and developing new programs for patients and caregivers at the Dallas Museum of Art, Baylor Health Care systems, and the University of Texas Southwestern Medical Center. Some of this involves bringing artists into hospitals and other health centers so patients can enjoy art and even make their own. There is evidence that art helps patients feel less pain and stress and thus need less pain medication.

I also teach a course on the “Art of Observation” to UT Southwestern medical students, using art to enhance their ability to observe, make visual inspections, and describe what they see—to help improve their diagnostic skills. I take students into my old museum and have them look at an 18th-century painting, The Abduction of Europa, by the French artist Jean Baptiste Marie Pierre. We study the painting for 45 minutes, and then I have them turn their backs and write down, without looking, answers to various questions about the painting. They learn that observation isn’t easy, and that different people see the same work of art—or the same patient of course—very differently. These students have work to do. In a class of 30 to 35 med students, typically only two or three notice which figures in the painting are looking directly at them.

The real beauty of art involves not just a connection between an arts institution and a person, but real moments of convergence within a community. For all the progress that’s been made, people who work in the arts are still figuring out how to make such moments happen. We need to know more—especially about the social interactions among people when they come together to experience art.

Which is why we need to keep experimenting, now more than ever.