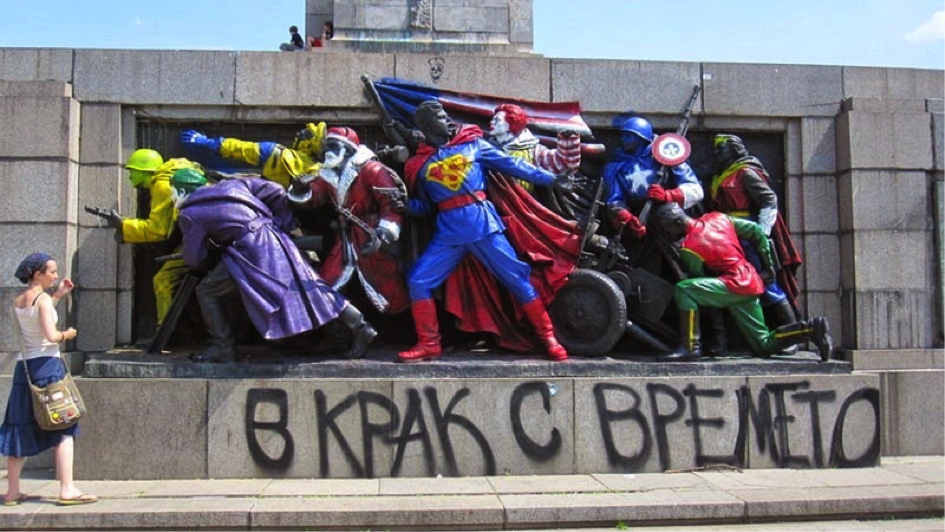 The Monument to the Soviet Army in Sofia, Bulgaria, as transformed by Destructive Creation in 2011. Photo courtesy of Animal New York.

The sun rises above Sofia’s skies. It seems like an ordinary day in 2011. But as people pass near the centrally-situated Sofia University, they forget their hurry and come to a halt.

They can’t help staring at a weird explosion of colors, vaguely reminiscent of a bronze sculpture they have seen before. The Monument to the Soviet Army, erected in 1954 in gratitude for the Red Army’s role in World War II, has been rendered unrecognizable. A sprayed inscription reads “abreast of the times”—below an army of superheroes and cartoon characters including Superman, Captain America, Wonder Woman, The Joker, Ronald McDonald, and Santa Claus. The American flag is painted behind the composition.

The municipality calls for sponsors to pay for cleaning up the monument. The “Russia-Bulgaria Forum” is the first to react to this call, and the monument is cleaned within a couple of days. Prosecutors start pre-trial proceedings against unknown perpetrators. 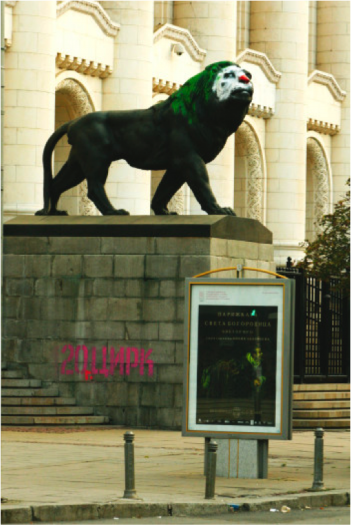 But meanwhile, the superhero makeover sparks national and international interest. Bulgarians have been debating the monument’s meaning and future since the beginning of the transition to democracy in 1989. Is it a piece of history that must be preserved or does it reconfirm the ugly lie that the Soviet Union was our savior? But nobody had previously seemed to care that much about the monument’s appearance and condition. Now they do.

A photo of the transformed statue is featured on BBC and CNN. Bulgarians take selfies and make appointments in front of the monument. The place becomes a cultural phenomenon everyone seems interested in. Discussions and arguments erupt. Some hold that the socialist monument should be demolished. Russophiles are utterly disgusted by the monstrous vandalism; the Russian Minister of Exterior Ministry of Foreign Affairs says the vandals should be punished. Bulgaria’s Minister of Culture himself condemns the statue’s new look and calls it an act of vandalism.

Whether it was that, or art, the act has provoked serious pro and anti-Russian discussion in the Bulgarian society.

The repainting explicitly expressed the split between Bulgaria’s traditional relationship to the Soviet Union and the modern influence of American pop culture and western Capitalism. The monument’s transformation raised questions about history and the way we interpret it, national identity and cultural belonging, globalization and consumerism.

Several months later, an urban art collective called Destructive Creation takes responsibility for the repainting. Its members want to remain anonymous. Fame has no appeal for them, they say; their goal is to make their actions speak for themselves. The only thing they want visible is their art. In fact, they don’t even call it art—they see it as pretentious to consider themselves “artists.”

In an interview for the Bulgarian national television (he was standing with his back towards the camera to keep his anonymity), a member of the collective described the scene-setting of the Monument to the Soviet Army as a “terrifying” experience—the risk of getting caught on the spot and charged with a criminal offense was extremely high. But the artists-who-don’t-think-they-are-artists were not done making political statements. 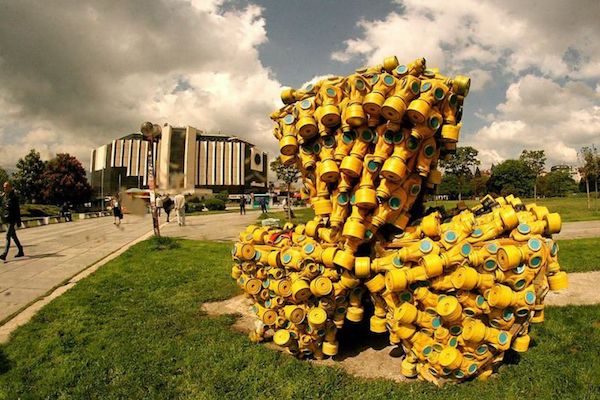 Two years later, in 2013, a suspiciously similar makeover affects another national symbol. One of two giant bronze guardians of the Palace of Justice is transformed overnight into something like Batman’s antagonist the Joker. The spray-painted inscription says “20 years of total circus.” Destructive Creation explain in a statement: “The state government is a circus and the political leaders are clowns.”

The tainted sculpture is, again, immediately cleaned, but in the meantime, the image once more hits the media. The lion-turned-clown grows in popularity and raises eyebrows. It addresses an important issue—omnipresent corruption and a promised change that never happens. Again, people have mixed feelings about Destructive Creation’s intervention; some say it’s а vicious mockery of national symbols, while others applaud it. They insist that the real outrage is how long the corrupt political elite has been laundering money at the expense of citizens’ prosperity.

Destructive Creation doesn’t just send strong messages about Bulgarian politics, it also sheds light on global issues. In 2014 the collective commemorated the 28-year anniversary of one of the greatest nuclear disasters of all time—Chernobyl. The artists came up with an installation made up of 400 gas masks sprayed bright yellow. “30 years ago this happened … nothing,” says the caption. The painful reminder refers to the Soviet Union’s decision to keep the communist eastern-bloc countries in the dark about the tragic event and its malignant impact on people’s health and lives.

Apart from making statements through sporadic acts of “art profanity,” Destructive Creation seem to really care about urban areas. In recent years, its members have undertaken intriguing and thought-provoking art installations and urban area “improvements.” These have included wooden rocking horses, with signs saying “wait a little,” positioned at bus stops so that bored commuters can have some fun; bus stops repainted in bright colors (yes, they do make the everyday routine more tolerable); repainted carts for homeless people; a stage for street musicians; an open-air library (with a beautifully painted bookstand for free book exchanges) in a park; and a bike-repair gazebo.

Though almost everything they do is illegal, the artists of Destructive Creation are to be “blamed” for a lot of urban improvements—at the cost of just a handful of coins, more or less. Minor urban changes really make a difference, fostering the spirit many of us would love to see more of in our city. 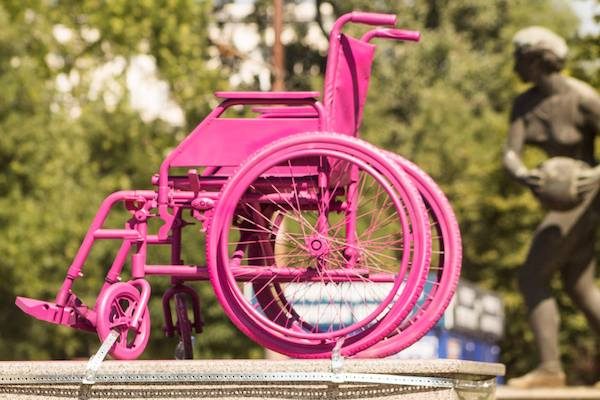 Indeed, by combining attention-seeking political messages and urban improvement, Destructive Creation is sending a larger social message—of the need for citizens to participate in moving beyond the past and shaping their own future.

Sometimes the collective makes this specific. Not long ago, a bright pink wheelchair was placed in a highly visible spot in front of the national stadium. The caption under the wheelchair read: “For the National Paralympic Team and for all the people for whom the Olympics are everyday.” The message was clear: Disabled people are fighting a battle every day of their lives.

They followed up with a campaign installing a “forbidden for disabled persons” sign above a Sofia sign. On its website, Destructive Creation celebrated the sign ironically: “We are an ancient people and we have ancient traditions that command that only the stronger survive. In spite of changes and time and different epochs, Sofia has remained accessible only to those of us who are healthy and there is no space for the imperfect ones.”

A follow-up message bitterly clarified the intent: Elections were soon taking place and candidates had given no priority to the issue of “making society more inclusive.”