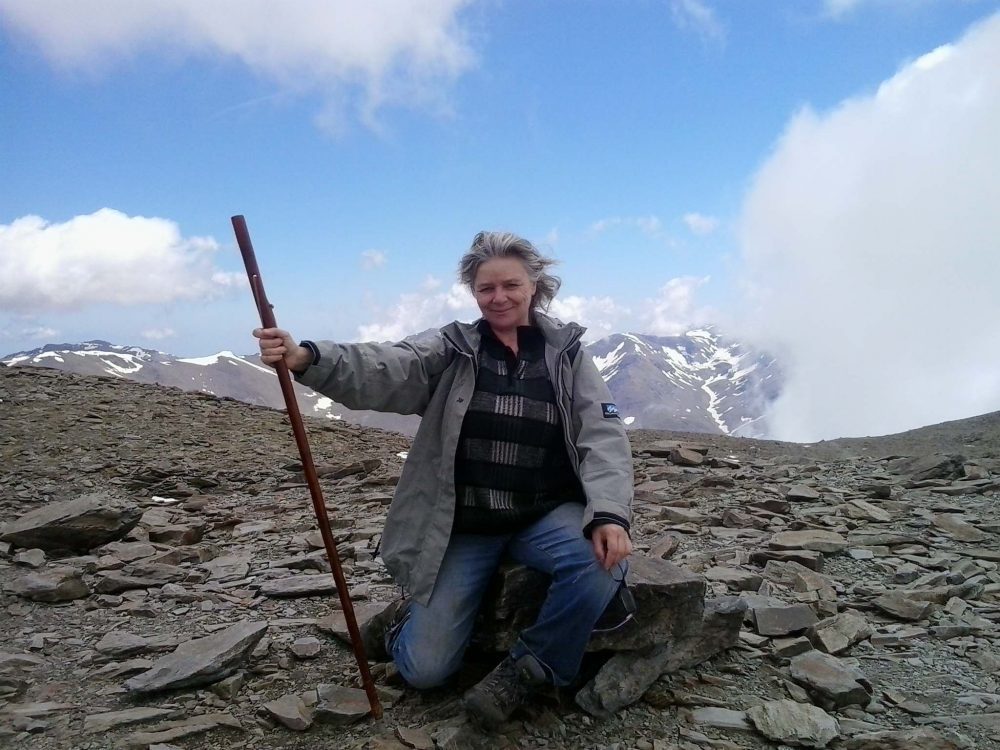 Clara Gari, who has made numerous trips on foot through the Pyrenees mountains, walking the border between Spain and France. She conceived the idea of the Grand Tour project. Photo courtesy of Clara Gari.

It must not be imagined that a walking tour, as some would have us fancy, is merely a better or worse way of seeing the country. There are many ways of seeing landscape quite as good; and none more vivid, in spite of canting dilettantes, than from a railway train. But landscape on a walking tour is quite accessory. He who is indeed of the brotherhood does not voyage in quest of the picturesque, but of certain jolly humours–of the hope and spirit with which the march begins at morning, and the peace and spiritual repletion of the evening’s rest.
-Robert Louis Stevenson, Walking Tours, 1876

Can you get closer to art by walking?

Grand Tour is an art project of the Contemporary Art Center Nau Côclea in Camallera, Catalunya, Spain, where I work. The tour consists of a 250-kilometer, three-week walk shared by people and artists of all kinds.

Every day people walk about 15 to 25 kilometers along with an artist or a group of artists who have prepared something for them. The path follows a topographical spiral down and around the region, crossing urban and rural areas, natural landscapes, and seaside or mountain trails. Both during the walk and at stops, the artists perform and make their artistic interventions—poetry, dance, installations, music. Day and night.

The trip is open to the public and offered in all possible formats: People can walk every day, or they can just do two or three days, or they can simply show up at a meeting point and enjoy the performance. Walkers can start or stop their journey at any time and adapt their trip to their personal plans. Grand Tour is a project for all types of audiences—families with children and solo travelers, old and young, experienced walkers and beginners.

Grand Tour was the name of the trip made in previous centuries by young artists and wealthy non-artists to discover Europe’s heritage. Every traveler had their own “Grand Tour,” an itinerary that combined visits to inescapable sites—the ruins of Rome, the streets of Paris, the paintings of the Flemish Primitives in Amsterdam and Bruges, the palaces of Florence and Venice—with stops that were more personal and idiosyncratic. The Grand Tour had a sense of initiation and ritual; young men and women were leaving home for the first time.

Map detail showing the walking route taken by participants of the Grand Tour, in northeastern Spain, near the border with France. Image courtesy of Grand Tour.

Today, tourism can be disappointing and leave you feeling impoverished. Why does it seem that the farther we go, the more we encounter the same globalized culture and environment? But there are still a thousand places and a thousand corners to discover in an intense and deeply experiential way. We each can make a real personal trip of artistic discovery. And that’s why the Grand Tour is still alive.

Today we make the Grand Tour on foot because we think that traveling is much more than just getting yourself to a particular place. Travel and touring bring us closer to everything external to us and thus make us see the world from the outside. Inevitably, we contrast the places and arts we encounter with our daily realities, and observe ourselves anew.

Discovery has an important role in this process. It is one thing to go to a place where you expect to see something. But it is something else entirely, something more transporting, to interrogate space and time because you guess that at any moment some wonder might happen.

The most characteristic feature of the Grand Tour is the creation of a process in which time does not count. There are so many places and people—artists, artisans, craftsmen, and other walkers—who may be very close in proximity to us, but we do not know them because we cannot give them the necessary time. The road offers time to the walker. This is often the greatest gift.

There is more: When artists and the public walk together, eat together, get tired, and rest together, creation becomes part of daily life, and the boundaries that separate artists from their audiences are completely blurred. A community that shares a path for a few days is neither a group of artists nor an audience but something halfway in between. It is a nomadic caravan that modifies, at least temporarily, the behavior of all participants. When all the members of a group commit to the same experience, the group changes. It becomes a provisional but solid society able to create and to produce art. Each work of art needs its audiences, its community.

The openness to receiving creation and art was what I sought in creating the Grand Tour. After many years of curatorial work in sound art and visual arts, I was feeling worried about the low level of reception at the Contemporary Art Center Nau Côclea. People walked through the exhibitions looking here and there and seeming a little distracted; their experiences lacked moments of intensity and intimacy. We detected a very great distance between the passion in the work of the artists and the relatively weak emotional capacity of the public. “To consume art” is not the same thing as being close to it. And “to consume quickly” does not allow for capturing the tempo or the soul of the art. Something had to be done.

Today we make the Grand Tour on foot because we think that traveling is much more than just getting yourself to a particular place. Travel and tour bring us closer to everything external to us and thus make us see the world from the outside.

We began to imagine site-specific presentations of art, bringing art to different locations, outside the museum. This would require a kind of pilgrimage by the visitor, a form of displacement. That was what we sought. We suspected that the act of going to the art had the power to transform the people’s approach to art. We had some clues in the work of artists such as Alícia Casadesús or Perejaume, who work in nature and who lead the public to the places where they want the work to be discovered. Some walking practices like those of Deriva Mussol (by Eva Marichalar-Freixa and Jordi Lafon in Catalunya) or Francis Alÿs or the more communitarian approach of Walking Women point in the same direction.

I myself have made many trips on foot—in the Pyrenees mountains, walking the border between Spain and France, in the Andalusian Sierra de Aracena, following the paths of the shepherds and the muleteers of the old times, or just walking from the home of one artist to the home of another and allowing them to lead me through their favorite paths and places. From walking I know how wonderful are the transformations the journey produces in the mind and the traveler’s gaze. The Grand Tour idea was exciting from the outset.

The project started in 2015. The first voyage began from the Contemporary Art Center Nau Côclea and toured various regions of Catalunya. In 2016 a tour along the coast in a northerly direction led us to France where we walked west. We crossed the border again and finished our trip in Ripoll. So far, 200 artists and 400 walkers have accompanied us, and some 2,000 people from across Europe and all over the world have come to share some of our activities at some point of the journey.

Walkers have to register at the Grand Tour website to join the trip. They pay for their own accommodations at the camping sites and mountain huts where we stop every day. From stop to stop, walkers carry some food and water for the day; the rest they get at destinations. They also pay 10 euros per day to cover a van carrying heavy bags and tents and accident insurance. Artists’ fees are paid partly with this money and partly with sponsored funding.

Each year, the Grand Tour program offers a residency grant to an artist for a project related to walking as an artistic practice. So we have been accompanied in Grand Tour by the Romanian Paula Onet, who in 2016 made walkers into actors in the filming of her documentary about Peter, the man with restless legs syndrome, who could not stop walking and had to travel on foot to survive. In 2017 we expect a lot from the project of the Dutch artist Monique Besten. She is now doing a virtual walk on the internet and this summer will overlap that with a real physical walk. In this, she is following the practice of the explorers who prepared with books, maps, and other traveler’s chronicles before they left on their remote travels.

For this summer, a small group has already formed from the two former trips that will act as the core of the event and inspire new walkers. They have a Facebook group called “Gran Tour, participants caminants.” On August 26, we will leave the sanctuary of Núria in the Pyrenees and walk for three weeks to the mountain of Montserrat, a very important, symbolic, and polysemic site for the Catalans. We will travel 290 kilometers by mountains, industrial zones, rivers, cities, and farmlands together with musicians, poets, live artists, performers, and visual artists. We will be a nomadic art brotherhood and sisterhood in search of our own Grand Tour.