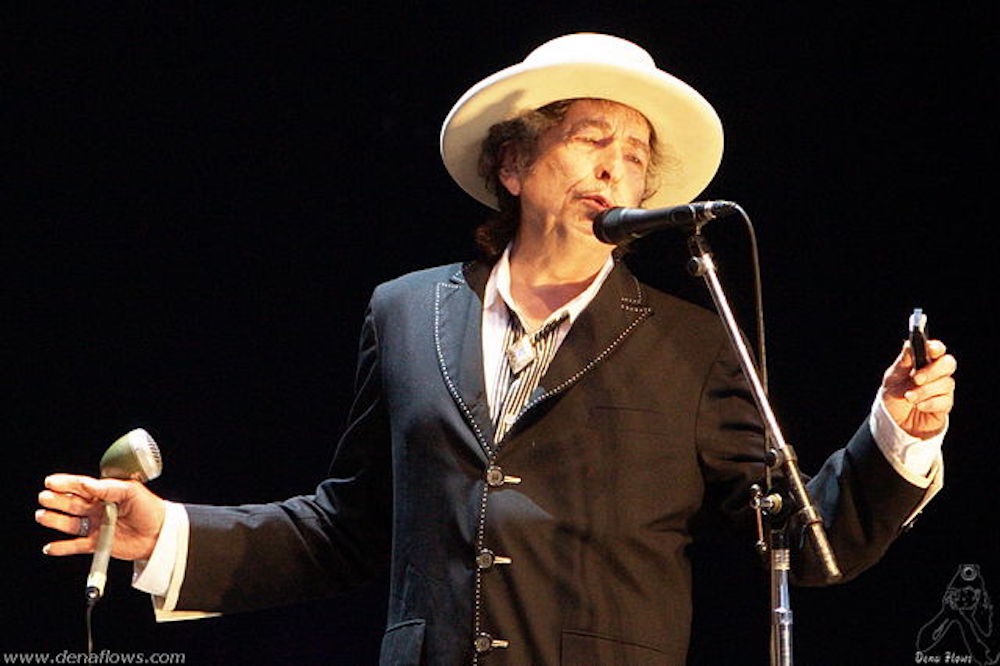 “Sing in me, oh Muse, and through me tell the story.” Homer’s opening to the Odyssey is one of the most well-known lines of what we call literature—but the Greeks called song. This particular translation—by Robert Fitzgerald with an added “oh”—puts Homer somewhere between singing and storytelling. And now, taking his seat next to Homer, at least according to the 2016 Nobel prize committee for literature, is Bob Dylan.

Dylan closes his Nobel lecture with this timeless invocation—alongside his interpretation of Odysseus’ encounter in the underworld with the greatest of Greek warriors, Achilles. In Hades, Achilles laments that it’s better to be a live slave than a dead king. “That’s what songs are too,” Dylan suggests. They are “alive in the land of the living” and are “meant to be sung, not read.” Shakespeare on the page is like Achilles in the underworld: regal but dead. Meanwhile, even the slightest folk tune cheers the tongue, taps your toe, and dances in your ear. Music keeps words lively.

A stretch? Maybe. But it adds an intriguing twist to the central argument raised when Dylan became the first songwriter to receive the literature Nobel: Is music literature? As far as Sara Daniu, the permanent secretary of the Swedish Academy, is concerned, in the case of Bob Dylan the answer is yes. “We’re really giving it to Bob Dylan as a great poet,” she declared. Since the announcement of the award, The Guardian, The Atlantic, The New York Times, and all of Twitter have also weighed in on the question of music as literature.

On June 4, Dylan added his own voice to the debate by giving his Nobel lecture, a prerequisite for picking up the award’s prize money. But Dylan did not just deliver a piece of writing to the prize committee. He made a recording of himself performing his piece, which at times sounds like word jazz set to lounge music. A boozy piano track by former band member Alan Pasqua accompanies Dylan’s voice—that reedy, wheezy, nasal twang that sounds like he’s swallowed one of his own iconic harmonicas. And in the background you can sometimes hear—by accident? by design?—shuffling paper that reminds us of literature’s primary status as a written form.

But the lecture does more than blur music/literature boundaries. It also raises the stakes. At one point during the lecture, Dylan mentions how Melville’s Moby Dick mixes “all the myths.” Dylan is using one myth in particular, which he does not mention by name but that nonetheless lurks behind all that he says about music and literature. It’s the myth of Orpheus “psychopomp,” Orpheus “leader of souls”—the story of how Orpheus tried to use music and his ears to guide his dead wife back to the land of the living. And failed. Spectacularly. 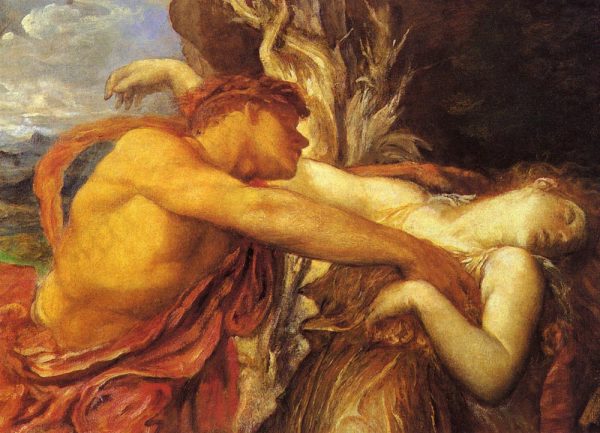 Overcome with grief at his wife Eurydice’s untimely death, Orpheus descends to the underworld. Through music alone, he charms the three-headed dog Cerberus, gives Sisyphus surcease, and convinces the death god himself to give his wife a second chance at life. His wish is granted on one fateful condition: During his return journey to the land of the living, Orpheus must not look back to see if Eurydice is following him. He must lead her out of Hades using only his ears to tell if she, whose very name means “beautiful voice,” is still following him. If he should turn back to verify her presence with his eyes, he will lose her forever. Tragically, inevitably, mere steps away from daylight, Orpheus turns. This “Orphic turn” shows that even the Greeks’ greatest musician cannot believe his ears. He must see to believe.

It’s a common urge. Like all performance, music is ephemeral. But unlike drama and dance, which tend toward the visual as well as the ephemeral, music is invisible. Faced with its evanescent and ineffable form, we often feel the need to turn music into an object, something we can hold on to, something we can see. Orpheus desires to visualize sound for the same reason he descends to the underworld in the first place: He wants to make the impermanent permanent. Music is like mortal life itself, fleeting. Because Orpheus does not accept his wife’s death, he tries to bring her back to life. Because he does not trust the testimony of ephemeral sound, he turns around.

This Orphic turn has been repeated endlessly throughout history and across an infinite variety of techniques, stories, and cultures. Even—though subtly enough that we might miss it—in Dylan’s lecture.

There, he describes a transformative moment, his first and only attendance at a Buddy Holly concert. Dylan focuses on Buddy’s “face, his hands, the way he tapped his foot, his big black glasses, the eyes behind the glasses, the way he held his guitar, the way he stood, his neat suit.” To Dylan’s eyes Buddy seems “permanent.” The description crescendos to epiphany when Buddy seems to transfer to Dylan all his musical power. This transformation does not come in a communication from vocal cord to eardrum or strummed guitar string to dancing hamstring. Instead, the magic zings from eye to eye: “He looked me right straight dead in the eye, and he transmitted something. Something I didn’t know what. And it gave me the chills.”

As with Orpheus and Eurydice, this gaze heralds death. A day or two later, Dylan tells us, Holly died. While it seems coincidence, the storyteller in Dylan sees a connection between the visual and the lethal. When we try to preserve music as a visual object—as a work of literature, as something that has permanence—we sometimes end by killing it.

… unlike drama and dance, which tend toward the visual as well as the ephemeral, music is invisible. Faced with its evanescent and ineffable form, we often feel the need to turn music into an object, something we can hold on to, something we can see.

Among the ancient Greeks, music and literature went hand-in-hand. And yet time and circumstance long ago stripped ancient Greek lyric, tragedy, and epic of their musical accompaniment and sent them out into the cold historical night naked and shorn of song. Today we have only the epithets to Homeric epic, the lyrics to Sapphic love songs, the scripts to Aeschylean tragedies. Beautiful, yes, but these works have forever lost something integral to their existence. Same with Dylan’s lyrics: If you’ve only read them, then you literally don’t know what you’re missing.

Of course, without the literary traces of certain works we would have nothing left at all. This is the case not only with Greek masterpieces but also with other, later, works—many 18th- and 19th-century folk songs, for example, which were preserved in collections known as “garlands” or “minstrels.” These volumes did not always print the melody along with the text—because of printing costs, the technological abilities of a given press, and the fact that some tunes were so well-known at the time of publication that printing them was superfluous. And yet these lyrics have lost something essential to their life as well. Songs are like magic spells: The charm is in the chanting.

That’s why, toward the end of his lecture, Dylan encourages fans to continue to experience his “lyrics the way they were intended to be heard: in concert or on record or however people are listening to songs these days.” One might read such a caveat as Dylan thumbing his nose at the Nobel Prize in “literature.” This would not be out of character.

But this emphasis can also be read as Dylan’s attempt to solve the paradox of how to preserve something without killing it. Audio recordings have a way of making a piece of music permanent without destroying its charm. It is for this reason that Dylan does not simply give a paper copy of his lecture to the Nobel committee but performs it, records it, and bequeaths it to posterity the way he wants it to be heard. (Dylan also continues to perform his work live—through the Never-Ending Tour, a non-stop concert juggernaut that he has been on since 1988.)

This keeps music and literature, hearing and seeing, together—and gives us a chance for permanence without death. If Hades punishes Orpheus for turning around, that’s just because the gods always get nervous when they see us mortals believing ourselves worthy of immortality. Despite what the gods may do and despite our own urges to separate this or that work of art into literature or music, the Orphic turn is there to remind us that we also want to unite the arts.