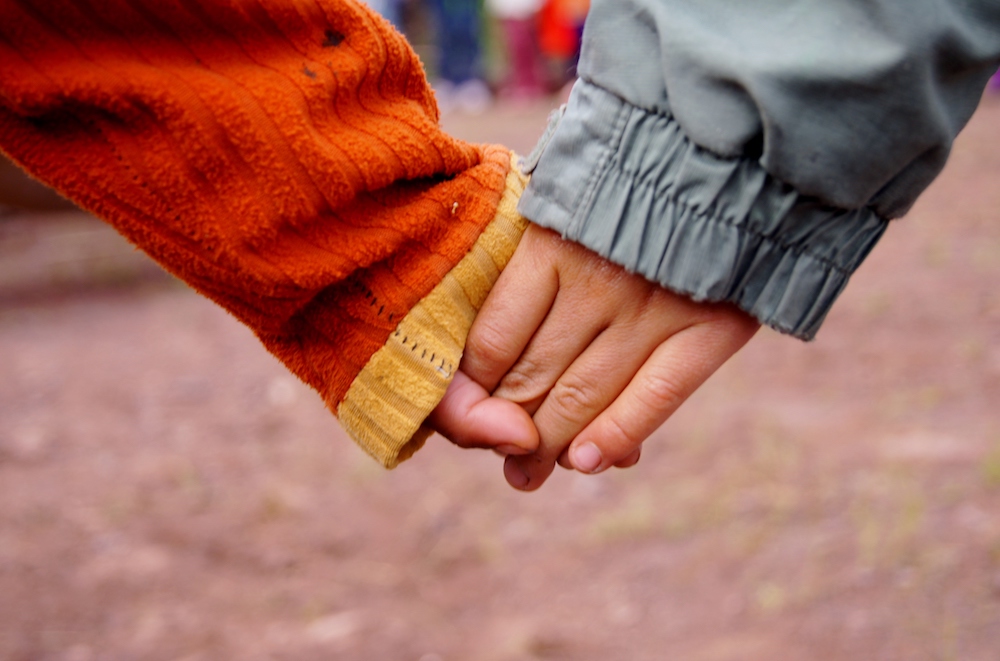 A sign of friendship in Peru, one of the ten most empathic countries in the world, according to research. Photo courtesy of Maria Grazia Montagnari/Flickr.

Empathy varies a lot among people, psychological research has found. But it also varies widely among countries and cultures. When my colleagues and I set out to analyze the largest study on empathy ever done—104,365 people from 63 countries—we expected to learn whether the extent to which we tune into others’ emotional cues clearly differs by culture. Instead, we were left with a number of new questions about what we mean—here and in other countries—when we talk about empathy.

I orginally got involved in studying empathy because I was raised by a single mother, with seven siblings, and felt grateful to the many people who offered their heartfelt assistance. One of these people, Ruth, a volunteer with a local nonprofit organization, became part of our lives—offering practical support like rides and babysitting, and also emotional support. She did so without judgment or expectation of anything in return. As I progressed in my education, I couldn’t help but wonder about what motivated people like Ruth.

However, I actually started my graduate student career by studying the opposite end of the spectrum—narcissism. We found that narcissism has been rising in American college students since the late 1970s. So I wondered whether empathy could also be declining across that same time period. Though I wasn’t really old enough to notice generational changes, more seasoned professors gave countless examples of the changes that they had seen in college students over the previous decades. I was skeptical: Didn’t the older generation always say this about the younger? But data suggested that this time there was evidence to back up their claims.

That data came from the Interpersonal Reactivity Index, the most commonly used tool that psychologists use to measure empathy. It asks people to what extent certain statements describe them. The statements include: “I often have tender, concerned feelings for people less fortunate than me,” and “When I’m upset at someone, I usually try to ‘put myself in his shoes’ for a while.” Participants’ responses are calculated on a 1 to 5 scale. 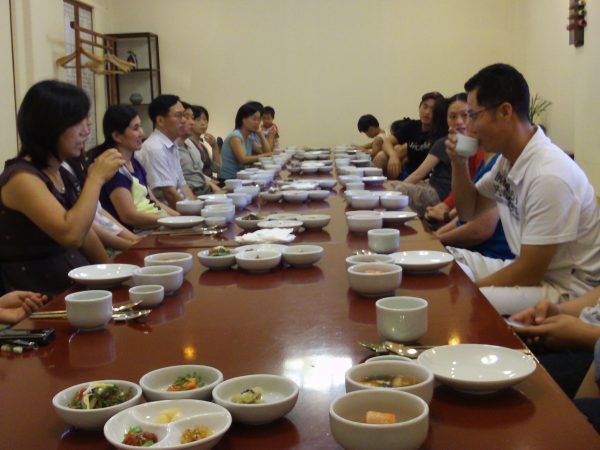 A family in Korea, one of the ten most empathetic countries in the world, according to reseach. Photo courtesy of raYmon/Flickr.

In 2010 we published a research paper finding declines in empathy among American college students over time. It got a lot of press—perhaps because of those stereotypes about younger generations. A clever marketing person at my university suggested that we post the empathy survey along with the press release so that people could find out their own scores. Over 100,000 people took the quiz!

That’s when I and my colleagues Bill Chopik and Ed O’Brien thought about using the data to better understand how empathy varies across cultures.

There were limitations to our data. As you can imagine, our surveys were only posted in English, since we never expected people from all over the world to be interested in the topic. So, only English speakers would have taken the survey, and among those, we can’t be sure whether these people were orginally from that country or just temporarily living there.

Yet we had reason to believe that the data was roughly accurate. For example, lots of research demonstrates that across a wide variety of ages, higher empathy scores are associated with more giving, helping, and sharing behaviors. Using data from high quality surveys (like the Gallup World Poll), we found that higher empathy countries had higher rates of volunteering and helping. So it seemed that our data captured empathy reasonably well.

Here are the ten countries with the highest empathy scores. 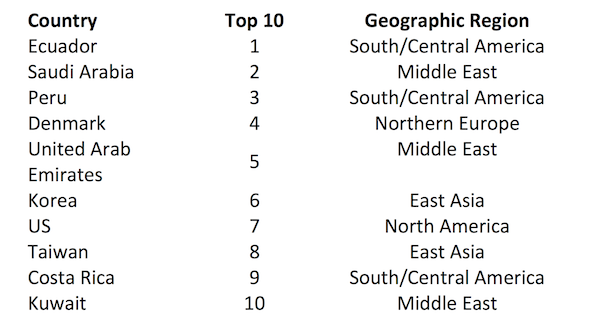 When showing these results to American friends, no one seemed to be surprised to see Denmark, a Northern European country, at No. 4. Nor was anyone surprised to see the United States at No. 7. I was a bit disappointed to see that my home country, Canada, trailed behind at No. 12.

However, there are other possible implications beyond stereotypes. Our study suggests that certain types of social structures can make people super-empathizers. In our study, we found that cultures that tend to be more collectivistic also tend to have higher empathy scores. Collectivism involves seeing oneself as being part of a larger, interconnected group of familial and other close relationships, with a priority on fitting in with others and maintaining harmony. So it’s not surprising that empathy would be higher in such cultures.

On the flip side, our study found that on average, more individualistic cultures scored lower on empathy. Individualism involves seeing oneself as distinct and separate from others, with a priority on showcasing one’s uniqueness and valuing self-expression. It is possible that when people are focused on being separate and unique, this can sometimes obscure the commonalities that we share, which could impair our willingness or ability to feel compassion for others and to imagine what it is like to be them.

The countries with low empathy scores were also a surprise. Finland, a Northern European country like Denmark, is No. 58. This doesn’t quite fit with the stereotype of Northern Europeans as places with a strong sense of social welfare. A similar result was found with Venezuela (No. 62), which doesn’t fit in with other South/Central American countries in the top 10. 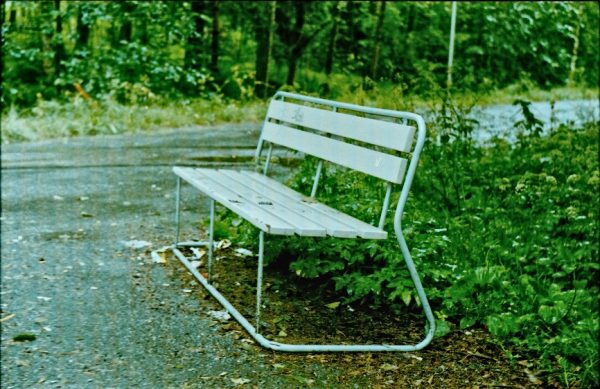 A lonely bench in Finland, one of the least empathetic countries in the world, according to research. Photo courtesy of Alexander Kosolov/Flickr.

We don’t have enough information to explain these variations. Perhaps there’s something in the history of Finland and Venezuela that make them different from their neighbors, or perhaps people in the cultures that appeared less empathetic feel uncomfortable overtly saying that they are kind and caring people, which would affect responses to our measure of empathy.

Which brings us to the bigger question of what respondents to our survey, around the world, thought they were doing. Empathy is a morally laden topic. In some cultures it might be important to demonstrate that one is morally good. In others it might be more important to measure one’s “real” nature—regardless of how “good” that nature is. So, when they answered questions about their own empathy, some respondents may have been demonstrating, while others were measuring. This could lead to biased responses.

There’s also the question of the recipient of empathy. Unfortunately the measure of empathy that we used doesn’t separately ask questions about empathy directed toward family and close friends, versus empathy directed toward strangers or people from different backgrounds. We don’t know whether people from the most empathetic regions of the world are mainly thinking about their loved ones when answering the questions, or if their empathy is more universally applied.

Perhaps the biggest take-home point from our data is this: Deep cultural knowledge of specific countries is likely to be more important, in further research, than applying a broad brush across many cultures. Most of the quantitative social science research on empathy so far has been conducted in what psychologists call “W.E.I.R.D.” cultures: Western, Educated, Individualistic, Rich, and Democratic. This is a problem because we don’t know how empathy operates within cultures that have different assumptions about the world, views of the self, and values. And cross-cultural psychology research mainly focuses on differences between Western countries and East Asian countries, with very limited research on Eastern Europe, South America, or the Middle East. Overall, we have a fragmented picture of the complex contextual factors at play.

We need to do a lot more research. In particular, we need culturally sensitive measures that are designed by people from other geographic regions to better capture what empathy means to them. We need to distinguish different recipients of empathy, such as close others versus strangers. For now, our study remains the largest study on empathy that exists, but hopefully future researchers will help us to paint a more careful picture of the world’s mosaic of empathy.