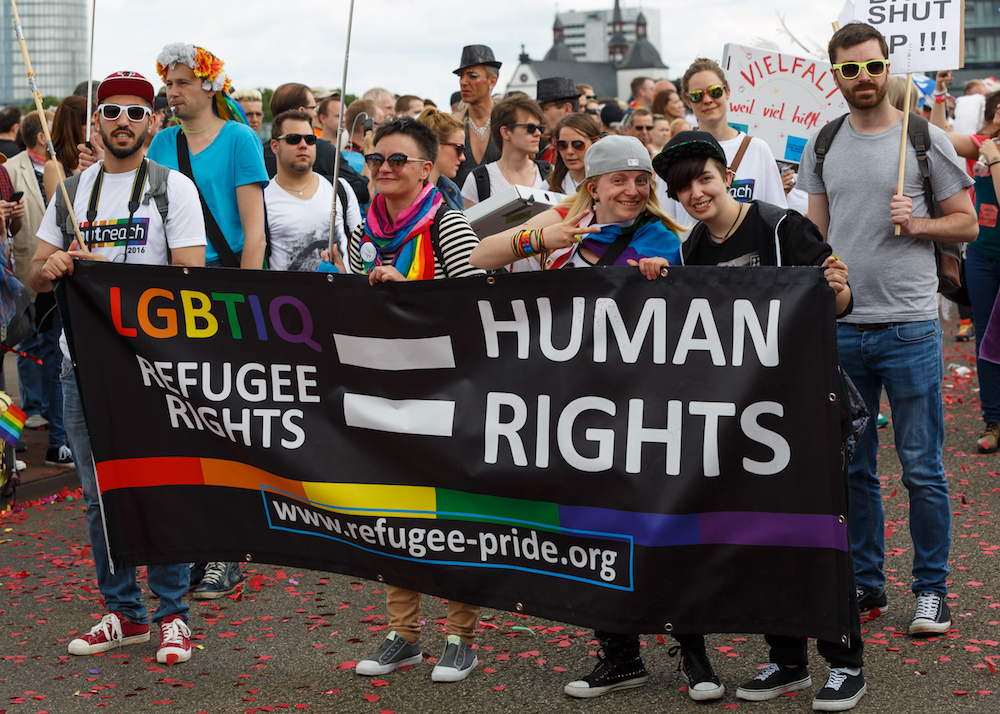 A Pride parade in Germany. Image courtesy of Wikimedia Commons.

In Inventing Human Rights: A History, UCLA historian Lynn Hunt traces the modern concept of Human Rights to a series of mid-18th century epistolary novels with a strong first person perspective, including Julie by Jean-Jacques Rousseau and Samuel Richardson’s Pamela and Clarissa. Male and female readers got passionately engrossed in the experience of being “in” the body and position of the heroines of these novels. Empathizing with people outside their class and experience, Hunt argues, was part of a transformation of the idea of a “self” that occurred in Europe at that time, paving the way for the idea of human rights to become “self-evident,” decades later and eventually leading to much broader definitions of human rights. Zócalo asked Hunt how empathy continues to transform our lives and politics today.

Q: As an historian, what do you think about the dueling arguments that, on the one hand, there is an empathy deficit going on, and on the other, social media is constantly bombarding us with things to be empathetic with?

A: I would say that the duel is not just about empathy deficits. There are also dueling positions about whether empathy is a bad basis for human rights or international politics, generally, because it acts as if [these things are] an affective question when [they’re] really a political question. But there is considerable interest in the question of empathy. So, on the one hand people say that it’s not a good thing to be thinking about, and on the other hand lots more people are thinking about it.

Part of it is a general shift in the humanities and social sciences, especially in the humanities, toward being more interested in the affective, emotional side of everything. There was a turn within neuroscience to be more interested in how emotions are crucial to reasoning and that kind of set [off] a lot of different kinds of arguments: philosophical, literary, you name it.

Q: One of the things that really struck me in reading your book—about how epistolary novels connected to human rights and revulsion around torture—was this real, incredible, excitement that people had reading these novels like Clarissa, Pamela, and Julie. The heroines of these novels, the people that men and women were empathizing with, were women. I wondered if empathy is still seen as female, and does that give it its weird moral authority? Because it definitely continues to have a very strong moral authority.

But a female character was the best representation of these agonies over personal autonomy. Women felt constrained, so they could be the subject of tragedy in a way that men couldn’t, because men were assumed to be autonomous and could just leave. We have many more novels about men leaving [for] picaresque adventures in search of autonomy.

This is inconceivable for women. So women become ideal for the representation of conflicts over autonomy. They can’t leave. They have to fight it out—either in their current situation or in a very constrained orbit. In Clarissa there is actually quite a bit of movement but it’s within England, if not within London. Whereas men can join the army, they can go overseas, they can join the navy. 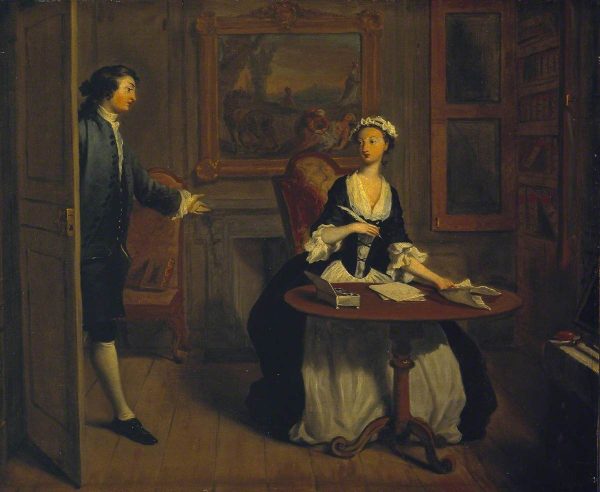 A: It’s an interesting question, when it’s not an incredibly tragic one. This is exactly what everyone is dealing with on immigration. Some part of the population is urging that we empathize with people fleeing who want to come to our country, that we see their common humanity. And some part of the population is saying this has gone too far, there need to be borders, we can only protect the community by keeping other people from getting into it. So, the issue of who you are supposed to have feelings for, and what the consequences of those feelings should be, is right now very much front and center. It would be a mistake to say it’s an easy question.

The chances for mobility are now so great in the world, even if they’re dangerous and horrible chances for mobility, that it’s a real issue. Is it really imaginable that a nation would say, “We’ll take anyone who wants to come”? Probably not. On the other hand, I don’t think it’s realistic to say, “Let’s have closed borders.” Which is why it’s such a complicated question.

Q: People are moving more. There’s also the growth of faster and faster communication. I wonder if you see the potential for even great empathetic leaps as the communication changes, along with other sorts of artistic experiences creating empathy.

A: I don’t think this works in lockstep: You get a new media technology and you get a new boundary of empathy. I don’t think it works quite that way. It’s so hard to predict how this line is going to move. Gay rights is obviously a stunning example of this. I saw a program on TV recently about AIDS back in the 1970s and 1980s. I lived through that, these were my friends, and I can’t even believe it … The kinds of things that people said about gay people in the 1980s—I almost can’t even believe it because we live in such a different world now. That’s the kind of thing I’m interested in.

At some point slavery became so intolerable to some portion of the population, not everybody, but to some portion. And it goes really quickly from being tolerable to being absolutely intolerable. That’s what I’m interested in. Slavery for centuries and no one did anything about it to speak of, and then at the end of the 18th century all of a sudden there is this revulsion.

Obviously it’s an emotional feeling—but it’s not like people automatically start to feel it when X happens. Gay Rights, for example. You go from some huge portion of the population being disgusted by the idea to some rather large portion of the population saying “Well, okay.” I mean it’s the same people. We’re not talking about some new generation. How that interior feeling of right and wrong gets activated—that’s the thing that interests me. Now we’re seeing that with trans people. 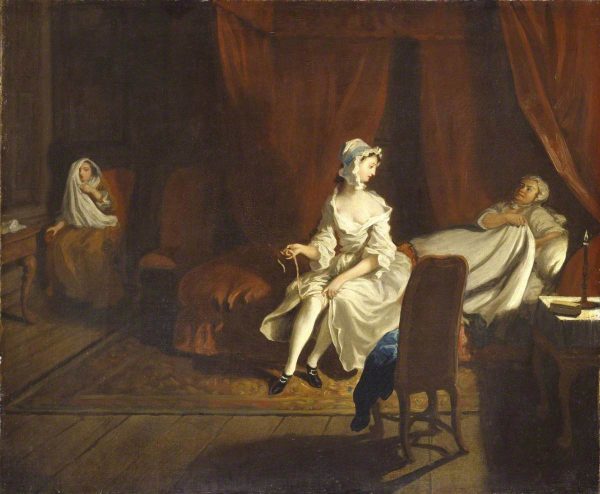 Pamela in the Bedroom with Mrs. Jewkes and Mr. B. Painting by Joseph Highmore. Image courtesy of Tate.

Q: Beyond trans rights, do you see another frontier that’s coming up?

A: Animals. I’m a meat eater but I say to all my friends: X number of years from now, I don’t know how many it’s going to be, we’re going to stop eating meat. I just think it’s going to happen. Again, it’ll probably happen for some people rather suddenly. People just can’t do it anymore.

Q: Obviously terrible backlashes have been part of the process of the establishment of human rights. Going forward do you think empathy is up to the task for what we have to do or are we asking too much of empathy?

A: I think it actually has to be up to the task. It has proved to be a very powerful force and it is much more powerful than rationally arguing cases. (Though the courts in this country have an absolutely fundamental role in all of this, don’t get me wrong.) The backlash part isn’t really so much that people don’t believe in human rights. It’s more a question of who they apply to.

The reason that’s the case is because it’s not obvious what the alternative would be. If you want to say that human rights are nonsense, which is a position that people have taken, you can make a strong philosophical argument. The issue that you have to resolve then is: “What is it that you think is the appropriate replacement?” And the only thing that people have been able to come up with is the rights of citizens within a nation or the rights of the nation as a superior community. But that led to such problematic things in the 1930s that I think that people aren’t super into that argument anymore. The backlash opinion now is that rights should be limited to the citizens of the nation as it is currently constituted. Of course, in the United States there are staggering numbers of people from other places. Who are, however, all too willing to shut the door now that they’re here.