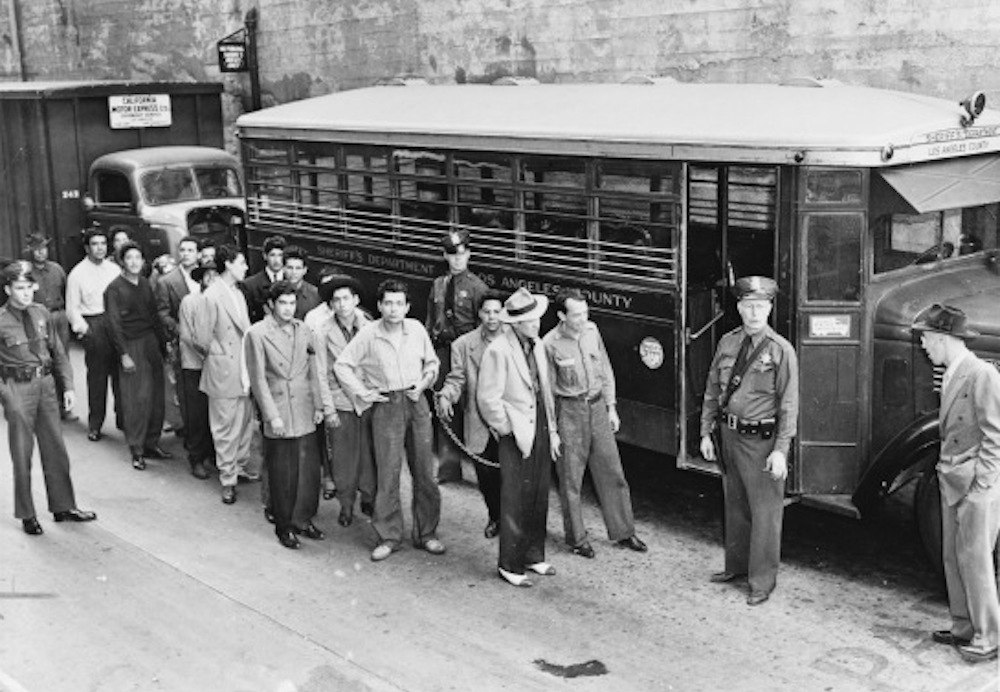 We here in Los Angeles are familiar with the use of fear as an instrument of public policy. Whether it was the LAPD’s occupation of South Central, the Hollywood black lists, the Japanese internment or the zoot suit riots, we’ve been perpetrators and victims, and we bear the scars.

Now it is happening again. Trump’s immigration policies are intended to frighten the vulnerable among us and also make us afraid of them. As before, we have choices. The default has been to go along with state-sponsored fear as long as the target was someone else. We don’t have to do that anymore. This time, a policy of fear is being implemented at a moment when Los Angeles is re-re-reinventing itself. Yet again we are celebrating new buildings and new people and, this time, new openness.

But have we really learned from the past? How we respond to the fear will determine whether this chapter is different.

In demagogic rants, President Trump demonizes immigrants as sub-humans, unshackles his enforcers, and praises the “rough guys” among the immigration agents. We are asked by the President to condone brutality because we are being protected from “animals” who are transforming “beautiful, quiet neighborhoods into bloodstained killing fields.” The reality of the enforcement surge is that it has doubled the arrests of immigrants with no criminal records. As a veteran agent at Immigration and Customs Enforcement (ICE) confessed to the New Yorker, “We seem to be targeting the most vulnerable people, not the worst,” and that includes the mothers and children who have fled Central America in recent years.

The strategy is an old one: “attrition through enforcement.” Scare people into leaving and save on the costs of detention and deportation. California invented a version back in our backlash days, with Proposition 187 which hoped to make life so threatening for the undocumented that they would run back across the border. That fear campaign died in the federal courts, but it inspired federal legislation in 1996 that restricts the rights of migrants and undergirds today’s attrition efforts.

The Trump edition of this strategy is nefarious. It rejects Obama policies—“felons not families” —that prioritized serious criminals for removal over ordinary folk whose only offense involves their immigration status. Instead, “all people are on the table” now, and every undocumented immigrant “should be afraid,” according to ICE chief Thomas Homan. So, we get daily reports of law-abiding parents snatched as they drop kids at school, go to court in domestic violence cases, or otherwise find themselves at the wrong place at the wrong time.

That amounts to indiscriminately vindictive punishment by a government agency. ICE goes for the easiest catch and applies the maximum penalty regardless of the circumstances. Cops can’t get away with that for good reason—not any more, at least not here. We’ve learned through the War on Drugs and other catastrophes that such tactics are costly and ineffective and that they damage whole communities and invariably lead to abuse and corruption in the agencies involved. Not long ago we countenanced, even cheered, mass incarceration as public policy. But, we tell ourselves we are different now. Today’s struggle over immigration is a test.

… this is about the kind of place we are making here, the kind of government we want, the kinds of rights we ourselves expect to exercise. Tolerance and diversity are supposed to be the cornerstones of the new Los Angeles.

So, resistance is not just about Trump, although the goal is to defeat his politics and policies. And, resistance is not just about the immigrants, although their rights and their wellbeing are important to us. Instead, this is about the kind of place we are making here, the kind of government we want, the kinds of rights we ourselves expect to exercise. Tolerance and diversity are supposed to be the cornerstones of the new Los Angeles. We’re going to find out.

We have gotten a good start. Recently, some city governments, police departments, and county jails in our region have taken important steps to prioritize smart criminal justice policies over unfair immigration controls. Sacramento is considering legislation, Senate Bill 54, that would codify and expand those practices. That work must continue and spread. No non-citizen should fear that reporting a crime could result in deportation, and no ICE agent should be able to detain someone in jail beyond a court-ordered release.

But, the Trump fear campaign demands a broader response that needs to begin with an expansive effort to ensure that all non-citizens secure their due process rights. Given the number of people under threat—1 million unauthorized immigrants in Los Angeles and Orange Counties—it will require a huge undertaking. Public and philanthropic dollars are being collected for legal defense funds, but a much broader commitment is necessary. Law schools and big law firms will have to mobilize along with faith groups and neighborhood organizations. Businesses too have a role. Effective coordination is always a challenge in this sprawling place, but the real trial will be the breadth of the response. How much do individuals and institutions not otherwise concerned with immigration get involved in combatting fear imposed on people they don’t know?

Effective legal defense leads to the next step: policy change through litigation. Lawsuits, often with states as plaintiffs, have frozen the administration’s travel bans and are challenging other policies. Much more is possible within a constitutional system that allows for considerable tussling over the limits of federal powers. To counter Democratic policies, Republican states have used the courts to push back on abortion, affirmative action and much else. Led by Texas, 26 states sued successfully to block President Obama’s 2014 executive orders on immigration. These same tactics can now combat Trump policies. California should be in the forefront.

The final step is to make this a fully welcoming state to the foreign born. We’ve already taken important measures with drivers’ licenses, health care and education to mitigate the effects of being out of status. Difficult challenges remain—starting with language access. Nearly 7 million people in this state have limited proficiency in English, and under the 1964 Civil rights Act they are supposed to have meaningful access to any government programs or services for which they are eligible. That’s nearly one-fifth of the state’s population that should never be at a loss in an emergency room or a school principal’s office. We have the greatest number of newcomers of any state by far, and self-interest dictates that we ensure they have opportunities to prosper.

Indeed, out of self-interest, California needs to develop its own policies regarding the vital supply of immigrants who make up more than one-third of the state’s prime working-age labor force. Can we, for example, ensure the necessary supply of highly skilled foreign workers while also assuring full access to technology jobs for our own kids? Can we develop policies for our agricultural workforce that meet current needs while encouraging future mechanization? Achieving these goals might require state labor permits and other measures that challenge federal control over the flow of immigrants. Washington’s monopoly is not in the constitution. It dates from the 1870s. Now is the time to test the limits.

When Gov. Jerry Brown signed legislation last month that greatly extended the state’s role in combatting climate change, he said, “We are a nation-state in a globalizing world.” California has been applying that same logic to immigration for some years. Trump provokes us to go further and decide for ourselves what kinds of people should live here and how they should be welcomed. This isn’t just about him. It isn’t just about them. It is about us and the kind of place we are making here.