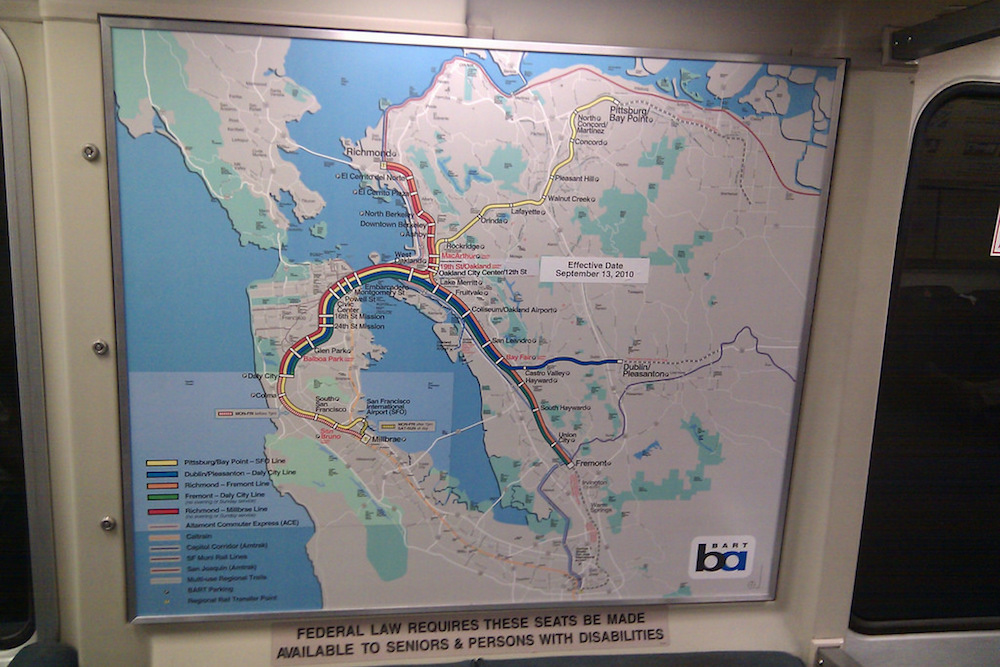 The northern terminus of SMART, the new light rail system officially opening this weekend in the North Bay, is the Sonoma County Airport Station in Santa Rosa. But after my 8-year-old son and I disembarked from an Alaska Airlines flight, we learned that the airport is more than a mile away from the train.

We didn’t know how to bridge this transportation gap. My son wasn’t up for a long walk. There is as yet no shuttle from plane to train. The public bus that would take us in the train’s direction didn’t show up on time. Uber wasn’t picking up at the airport. My Lyft app kept crashing. And the four cabbies parked outside the airport all refused to take us, saying they didn’t want to give up their place in line for such a short, cheap trip.

The Bay Area is the richest large metropolitan region on the planet because of the ability of its people and institutions to connect with each other and the larger world. But if you need to make transit connections in the Bay Area, good luck.

Inspired by the soft launch of SMART—the 43-mile Sonoma and Marin County light rail has offered preview rides for months—I recently spent three days navigating the Bay Area without a car. And so I experienced beautiful rides on trains, ferries, subways, and buses. But I was also bewildered by the utter failure of a place that’s famous for integrating culture and technology to integrate its own infrastructure and transportation.

For all its global clout, the Bay Area remains, at the local level, a fragmented mess of nine counties, 101 municipalities, and hundreds of government districts.

“The counties grew up separately, and so we’re stuck with a mishmash of agencies and of transportation,” says Jim Wunderman, president and CEO of the Bay Area Council. “I don’t think this is sustainable anymore.”

After waiting 40 minutes at Sonoma County Airport, we called a new cab, which took us the 1.2 miles to the train station for $10. The new SMART trains might have been comfortable if they weren’t so jammed. My skinny son squeezed into a tiny spot between a seat and a bike rack. I stood in a mass of people near the front of the car. The first 43-mile segment of what promises to be a 70-mile train runs from the not-quite-airport station to downtown San Rafael. Given the distance and the length of the rides—more than an hour—the trains offer bathrooms and a café that sells wine. This is Sonoma after all.

The ride south took 90 minutes and offered a grittier view of Sonoma and Marin Counties—mobile home parks, big empty parking lots, old industrial properties (all of which could be used to build housing, but that’s another story)—as well as views of the Petaluma River, Mt. Tamalpais, and even Mt. Diablo.

The SMART train is eventually supposed to reach the Larkspur Ferry Terminal, from where it’s a 35-minute boat ride to San Francisco. But the first segment ends two miles short of the ferry. There’s a bike path to the terminal that’s walkable, and a bus station in San Rafael that can get you to the ferry, but that bus ride takes between 14 and 26 minutes. We wanted to get there faster and opted for an Uber.

The ferry, which left 10 minutes late, entered the bay next to San Quentin Prison; inmates waved at the boat. It was a clear day and so we enjoyed views of the Golden Gate and Bay bridges. Once at the Ferry Building, I kept my son happy with soft serve ice cream from Gott’s.

… the first six trains were too full to board. … When the seventh train arrived, we couldn’t wait any longer, and pushed our way in. “That’s rude,” said one rider. “We’re from L.A.,” I replied.

After two hours of interviews for other stories, we found ourselves at the BART Embarcadero Station in San Francisco, eager to get to the Oakland Airport and fly home. But the first six trains were too full to board. This wasn’t a surprise. BART is a system built for 60,000 riders that moves more than 400,000 daily. The system badly needs more and newer cars, better maintenance, governance that isn’t dominated by unions, and a second tunnel under the bay.

When the seventh train arrived, we couldn’t wait any longer, and pushed our way in. “That’s rude,” said one rider.

In Los Angeles, I pay just $1.75 to board a Metro train, and all transfers are free for two hours. In the Bay Area, even public transit is pricey.

A couple of days later, I flew back to Oakland for another expensive and overcrowded BART ride, this one into San Francisco. After switching to the local Muni system, I arrived late to an appointment because of a train breakdown.

Later, I found myself at BART’s Powell Street station, needing to get to San Jose, a city that BART doesn’t quite reach (though an extension should be complete next year). I needed to take the Caltrain, but how to get there? BART and Caltrain share a station in Millbrae, but the schedules aren’t synchronized, meaning I could wait for 45 minutes. So, carrying luggage, I did a 25-minute walk to the Caltrain station at 4th and King, where I purchased a one-way $9.75 ticket to San Jose.

In San Jose, I disembarked at Diridon Station, which may have a bright future as northern terminus of high-speed rail. But for now, it is just another setting for connection frustration, as I waited a half-hour for a light rail train on Santa Clara County’s VTA system. I contemplated getting on ACE, a railway connecting San Jose with Stockton, but the limited schedule meant there was no return train until morning.

The next day, I needed to get to San Jose Airport, and so I took Caltrain to the Santa Clara Station, which is close to the airport and offers a VTA bus shuttle. But the bus driver refused to open the bus door for passengers for 15 minutes, even during a brief squall of rain. The station is only five minutes from the airport, but the shuttle took us on a meandering route that included a stop at San Jose’s pro soccer stadium.

Here’s what gets forgotten in this crazy quilt of disconnected systems: the people riding them. No wonder that for all the different transit offered in the Bay Area, a relatively small share of residents (less than one-third) actually use it.

If the Bay Area is ever going to resemble the design-savvy ecotopia it purports to be, it will need to get majorities of its people on its trains and buses. And that will require combining operations and linking schedules of these different systems. As any good Silicon Valley company knows, any service—from public transit to email—requires that the user have faith that the system will work, that it will be affordable, and that it won’t drop you off a mile from the next station, or be a half-hour late, or offer trains so full you can’t get on them.

Right now, using Bay Area transit makes you feel powerless. And that should be unacceptable in California’s most powerful region.