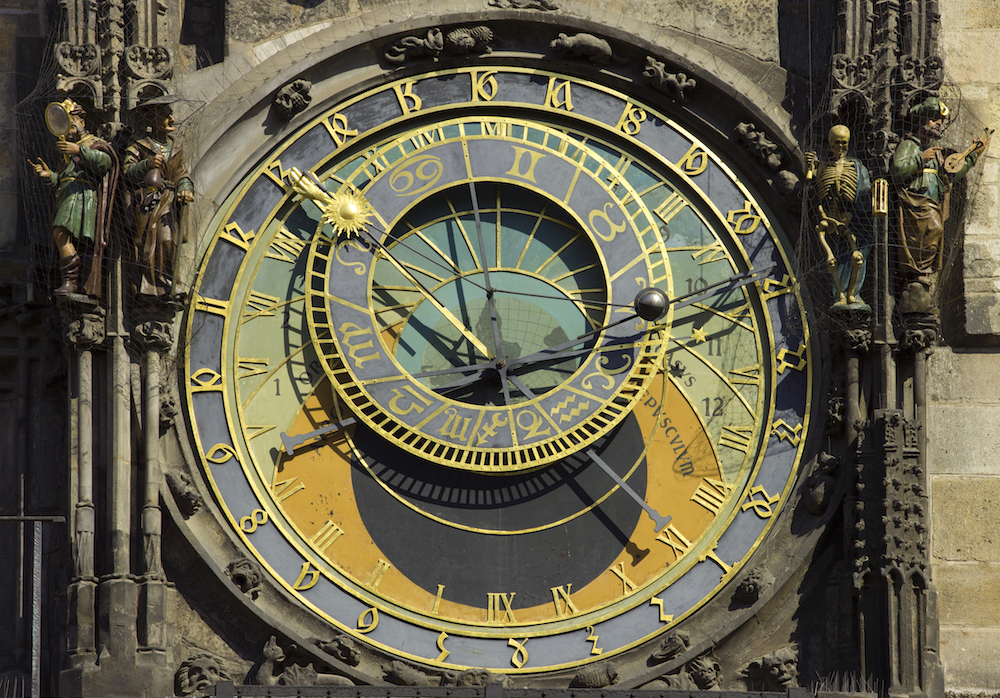 An astronomical clock sits in the Old Town Square of Prague. Photo courtesy of Wikimedia Commons.

Why does an hour last 60 minutes? Why does a minute last 60 seconds? What are “minutes” and “seconds,” really? A minute is just the duration you arrive at if you divide an hour into 60 equal segments. Seconds are merely what you get if you divide hours by 60 a second time.

We use these units because some of the first people to make precise astronomical calculations, the Babylonians, utilized a base-60 (sexagesimal) number system that they inherited from a more ancient population in Mesopotamia, the Sumerians. The Sumerian base-60 system proved influential on Babylonian and Greek astronomers and, because of this influence, it was later used by Europeans to divide hours into 60 equal units. Contemporary U.S. culture has inherited, in a quasi-accidental series of events played out over millennia, this esoteric linguistic vestige of ancient Mesopotamia.

But surely, some might say, “hours” themselves are real, given to us by nature somehow. Yet these time units, too, are a linguistic remnant. When sundials were first developed in ancient Egypt, their creators relied on a base-10 (decimal) system like that of English wherein 10 serves as a recurring element within larger verbal numbers. (For instance “thirty-one”, “forty-one”, “fifty-one”, etc.) As a result, their sundials broke up the day’s shadows into 10 units. Egyptians added two units to represent the times around sunrise and sunset. The resultant 12-unit system was acquired by various cultures and eventually applied to both days and nights to yield a diurnal cycle with 24 major segments.

If all of this seems a bit arbitrary, that is because it is. There is an astronomical basis for dividing time into years and days. But most temporal units came into existence only because of the features of particular linguistic and mathematical systems. Time seems objective, as if it transcends our socio-cultural environment. But the ways we think of time depend profoundly on the place—and time—in which we live.

Temporal conventions are given to us so early in our development that a person may not remember his or her life before it was dissected into weeks, hours, and minutes. From infancy, linguistically contingent cognitive implements sculpt the way we experience the passing of time. The study of the world’s diverse cultures is demonstrating, more and more, just how much linguistic disparities impact human temporal experience.

The effect of linguistic conventions on the discrimination of time extend far beyond differences in time-related words—for instance, the words “minute” in English and “分钟” in Mandarin that differ in script and sound but refer to the same time span. More profoundly, the numbers that we use to keep track of time differ dramatically across languages and cultures. For example, number systems vary with respect to their bases. While ancient Mesopotamians relied on a sexagesimal system, most cultures have come to rely on decimal systems like the Egyptians’ or ours or, less frequently, base-20 (vigesimal) systems like that employed by the Maya.

The Mayan calendar had 20 names for days, in contrast to our seven, because of the vigesimal nature of Mayan numbers. The popularity of decimal and vigesimal systems owes itself to a non-temporal feature in nature, the quantity of our fingers and toes, but many other kinds of numbers exist, including the base-6 (senary) systems found in some languages of New Guinea. Had ancient Egyptians used a senary system, our days might have 16 hours instead of 24, since daylight could have first been divided into eight (6+2) units instead of 12. 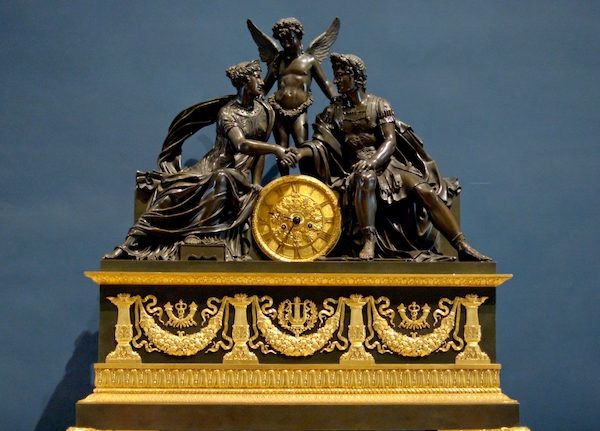 The clock represents Mars and Venus, an allegory of the wedding of Napoleon I and Archduchess Marie Louise of Austria. Photo courtesy of Marie Lan-Nguyen/Wikimedia Commons.

Even the use of the same number base across cultures does not guarantee the same kind of time measurement. Decimal numbers, for example, don’t always yield decimal-oriented time. Napoleon famously abolished a decimal calendar used in post-revolution France, in which months were divided into segments of 10, rather than seven, days. (The expunged calendar had several flaws, a notable one being that laborers were only guaranteed one full day of rest every 10 days.)

Today we continue to rely on an ancient sexagesimal system to tell time, and it would take much effort to overturn this usage. Yet our decimal system also influences our time-telling. When great precision is required, we measure time in tenths and hundredths of seconds, or even in thousandths (milliseconds) and billionths (nanoseconds). At the other end of the scale, we measure years in decades, centuries, and millennia.

Some languages rely on restricted number systems without any bases at all. These include the “one-two-many” systems of some populations in Amazonia and Australia. Some hunter-gatherers do not use any precise numbers. Research by a number of cognitive scientists has shown that such numberless adults do not exactly differentiate quantities greater than three. Instead, they rely on the approximation of most quantities in their day-to-day lives. Such approximation methods are quite useful for most tasks, but do not enable cultures to tell time in precise ways. To do so, they need to innovate or adopt numbers. The development and refinement of linguistic numbers allowed humans to reach into the amorphous, abstract temporal dimension and begin to shape it into things like hours and minutes.

“One-two-many” cultures are not atavistic holdouts from the Paleolithic, but the ways they experience the passing of time do seem to reflect more clearly the ways that most people experienced time for the majority of our species’ existence. Minutes and seconds did not really influence European life until the usage of accurate clocks in church towers became widespread in the 15th and 16th centuries. Pendulum-based clocks and spring-loaded watches were invented and refined in the 17th and 18th centuries, bringing both minutes and seconds to the masses.

These inventions facilitated the coordination of labor that proved critical to the Industrial Revolution and enabled better navigation. Arguably, though, they also made our perception of time less natural. Our construal of time came to revolve around quantitatively based cultural conventions like minutes and seconds, becoming less centered around natural rhythms like the diurnal cycle. Regardless, this new focus on temporal units facilitated the Industrial Revolution that, in turn, led to developments like the creation of time zones in the 19th century. Time zones were initially used to streamline rail travel in North America, though they now influence air travel and many other aspects of our lives. Precise measurement of time also advanced science, eventually expanding our understanding of time itself: Einstein’s proof of the relative nature of elapsed time was based on the constancy of the speed of light, which he knew to be about 300,000 kilometers per second.

Perhaps the most interesting cultural differences surrounding time-sense are not related to numbers, but to how we turn time into space. I have alluded to the “passing” of time, but this passing is also a culturally conditioned idea. English speakers often speak of past events as though they are “behind” the speaker while future events are “ahead” of them. In contrast, speakers of Aymara in the Andes refer to the future as being behind them, while the past is in front. (This makes sense, in a way, since we can more clearly “see” what happened in the past.)

Being human certainly does not require the usage of precise temporal measurements, nor does it require that we even think of time in the same ways when we are not measuring it. Time is fundamental to our lives but discriminated in culturally dependent ways.

The Yupno of New Guinea refer to the past as being downhill, the future as uphill. Such diverse perspectives surface in gestures, too: When English speakers talk about past events they often point backwards, while Aymara speakers point forwards. The Yupno point downhill when discussing past events, regardless of the direction they are facing while speaking. The Kuuk Thaayorre, indigenous to the Cape York Peninsula in Australia, may point east when speaking of earlier events. Some people do not seem to use space at all when speaking or gesturing about time, for instance speakers of the Amazonian language Tupi-Kawahib. These people do not refer to the future or past as being anywhere in space, unlike speakers of English, Aymara, or just about any other language. Unsurprisingly, perhaps, the Tupi-Kawahib language also does not offer precise ways of measuring time.

Being human certainly does not require the usage of precise temporal measurements, nor does it require that we even think of time in the same ways when we are not measuring it. Time is fundamental to our lives but discriminated in culturally dependent ways.

The radical variability in how humans construe time illustrates well the extent to which communicative conventions can profoundly impact our lives. More and more, cross-cultural research on time and other basic facets of life is demonstrating that the human experience is more varied than is often assumed. The exploration of cultural and linguistic variation is critical to advancing our understanding both of others and of ourselves. The continuation and expansion of this exploration is, therefore, well worth our time.