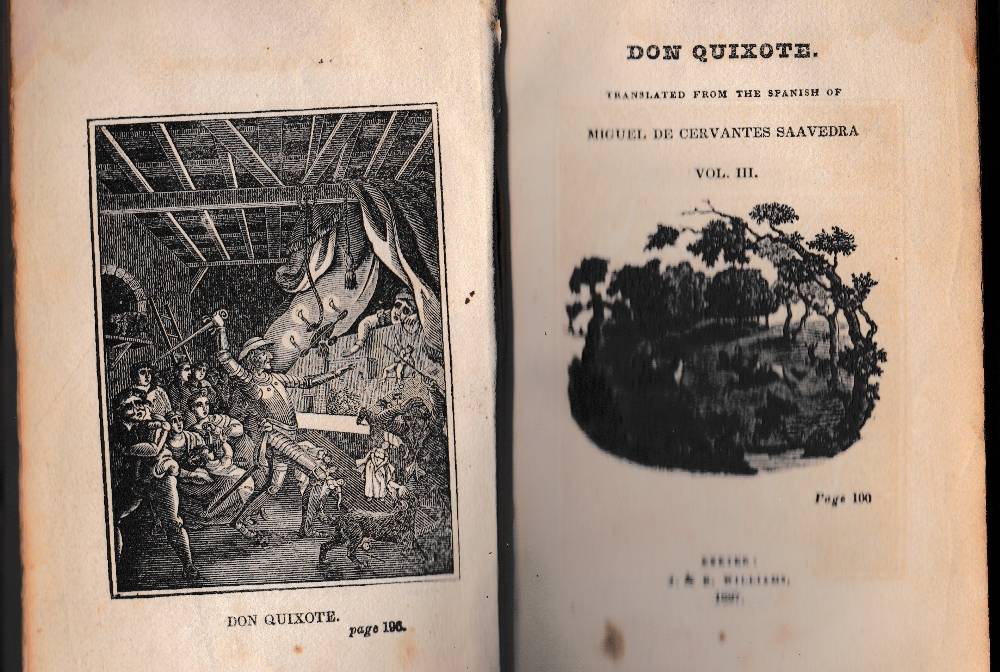 These two inventions, brought together again in Northern Europe, encountered a rising merchant class and the alphabet, which made print with movable type much more effective than in China. Cheaper literature led to rising literacy rates, which in turn increased the demand for printed matter, beginning a virtuous cycle that has lasted until today.

Don Quixote was an early beneficiary. This irreverent story of an aristocrat who reads too many chivalric romances was perfect for a broader readership. After a first printing in 1605, new editions were produced across Castile and Aragon, resulting in 13,500 available copies in its first 10 years. Don Quixote became popular abroad as well, with editions in far-away Brussels, Milan, and Hamburg. Most significant was an English translation, which Shakespeare liked so much that he wrote a play, Cardenio (apparently co-authored by John Fletcher, and since lost), based on one of the novel’s interpolated tales. People started to dress as Don Quixote and his wily servant, Sancho Panza, fiction spilling over into the real world.

The new technologies came with significant side effects. So popular was the novel that an anonymous writer decided to write a sequel. Cervantes, who felt that he owned the famous character he had created, was dismayed. He depended on the novel to solve his perpetual financial troubles (he had been accused of defrauding the state while working as a tax collector raising funds for the Spanish Armada, and put in prison). With few legal means at his disposal, Cervantes realized that he had to fight fire with fire and write his own sequel. In it, he made Don Quixote defeat an imposter drawn from the unauthorized rival version—Quixote’s false double—showing who was really in charge of the story. 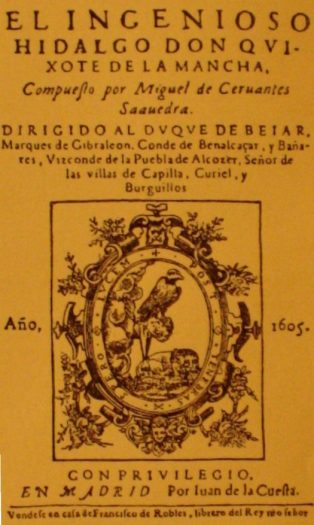 The title page of the first edition of Don Quixote. Image courtesy of Wikimedia Commons.

The experience taught Cervantes a lesson: Paper and print could help him find new readers both at home and abroad, but these same technologies made it easier for others to sell pirated editions. (Cervantes might not have called them pirates, because he knew about real ones: He had been captured by North African pirates after participating in the historic battle of Lepanto and spent four years in captivity in Algiers, waiting for his family to come up with the ransom.)

Eventually, Cervantes came to realize that the biggest villain in the story wasn’t copycats or pirates; it was printers, who didn’t care about originality, ownership, or artistic integrity—only sales. Once he had identified the enemy, Cervantes used his most potent weapon, his character Don Quixote, and, toward the end of the same sequel, sent him straight into a print shop.

There Don Quixote marvels at the sophisticated division of labor—one of the first industrial processes of mass production—but he also finds that printers systematically cheat authors and translators. When he comes across the unauthorized version of his own life, which is being printed before his very eyes, he leaves the print shop in a huff.

Cervantes’s broadside against printers didn’t bring them down, nor was it meant to, because Cervantes knew how much he depended on them. But he would not lionize them either. His compromise was to use his great novel to take the measure of the age of print.

That age is coming to an end now, as our own digital revolution is changing how literature is read, distributed, and written. Paper and print are being replaced with screens and servers. Electronic texts are not naturally divided into discrete pages, which is why we’re scrolling again, as our forbearers did before the invention of the book. We’ve also become attached to tablets, a format that takes us all the way back to the Mesopotamian clay tablets on which the first great masterpieces were written 4,000 years ago. What are the effects of these emerging technologies that combine old and new?

We could do worse than to ask Cervantes. He would not be surprised that the technologies replacing paper and print are making it infinitely easier to reach global audiences, nor that expanding readerships are changing the kinds of literature being written, from novels explicitly aimed at a global readership to ever more specialized subgenres of romance written and published on Amazon and similar platforms.

Nor would Cervantes be surprised by the price we have to pay for these services. Internet piracy is rampant because laws and enforcement mechanisms haven’t yet caught up with the new technologies; on the dark net, they probably never will. Unauthorized sequels are now so widespread that we have a new word for them: fan fiction. Most important, ownership of our new machines is even more concentrated today than it was in Cervantes’ time.

Were Cervantes to write a modern version of Don Quixote, he wouldn’t even need to change the famous scene in which his knight battles windmills (which, it should be noted, were sometimes used to power paper mills). A new Don Quixote could be fighting wind-powered server farms hosting websites instead. Knocked down by the blades, he would get up and look for the true culprit. Instead of entering a print shop, he would visit corporate headquarters in Mountain View or Cupertino, channeling the frustration we feel about depending on the technologies that undergird our writing and communication methods.

This was why Don Quixote, the deluded knight, became a modern hero in the first place: He acted out our helplessness in the face of new machines, heroically battling windmills, printers, and the new media landscape that was also the reason for his success. What could be more quixotic than that?