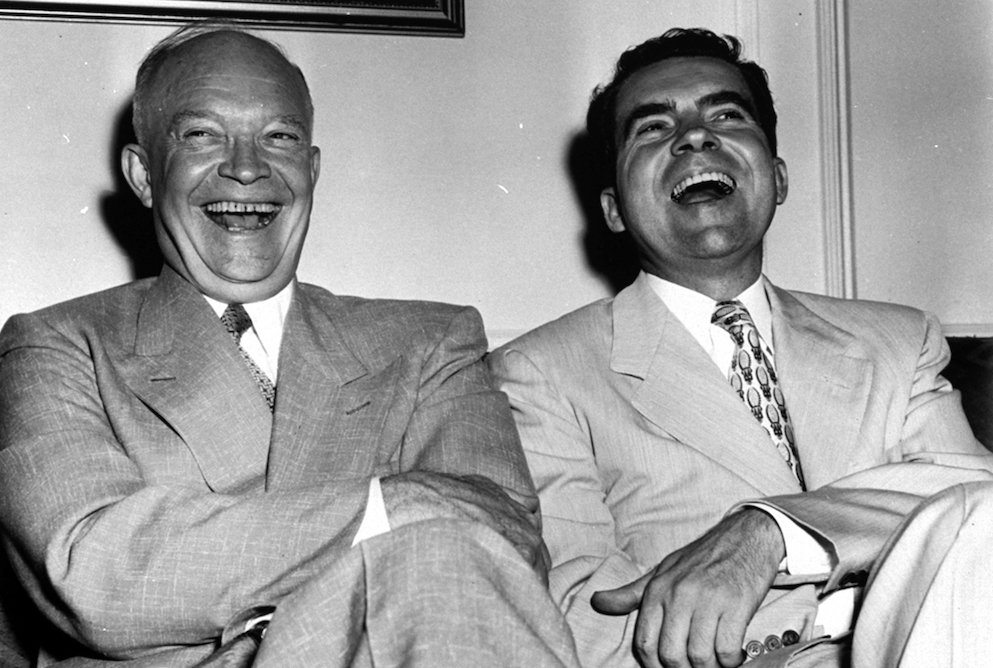 None of that’s true, but it does beg the question: What would a tax policy need to look like to accomplish all this? Going back to an earlier Republican administration provides a striking example.

During the administration of President Dwight D. Eisenhower, from 1953 to 1961, the top income bracket in the United States climbed to a marginal tax rate of 91 percent. Taxes on corporate profits were two times as great as they are in 2017, and that’s before the current proposal to cut that rate to 21 percent. The tax on large estates rose to more than 70 percent. Businesses operated under a relatively high tax burden, and they employed a labor force in which one-third of the workers were unionized and bargained with executives as equals. Corporations served a diversity of stakeholders as opposed to stockholders. The result was a booming economy that benefited most Americans.

In 1955, Fortune magazine noted approvingly that the incomes of the top 0.01 percent of Americans were less than half what they had been in the late 1920s, and their share of total income was down by 75 percent. In the 1950s, the average corporate CEO received 20 times more compensation than the firm’s typical employee; by 2016, CEOs’ salaries averaged more than 200 times those of the average worker.

Americans in the 1950s enjoyed what economists called “the virtuous circle of growth”: Well-paid workers fueled consumer demand, which, in turn, generated business expansion and hiring, raising corporate profits, which produced higher wages and more hiring. A consumer culture flourished and, therefore, so did the economy. Fortune noted that, by the mid-1950s, the number of middle-class families was increasing by 1.1 million a year.

A key part of the prosperity equation of the 1950s was public policy—what the federal government accomplished with its tax revenues. The Eisenhower administration invested in human capital, not in corporate welfare. It expanded Social Security. It raised the minimum wage by $1 an hour, or $8.85 per hour in 2017 dollars. (The federal minimum wage is currently $7.25 an hour.) And Eisenhower initiated the greatest public works project in American history, the interstate highway system, a program funded by a gas tax.

Eisenhower’s 1958 budget nearly doubled the federal budget from that of the Truman era, and raised the national debt by billions of dollars. But it also provided jobs and education for millions of Americans who, in turn, would repay the nation many times over.

It would have been politically expedient in the Cold War era for Eisenhower to have spent more of the government’s largesse on military hardware and less on human capital. But he didn’t. His response to the Soviet Union’s launch of the Sputnik satellite in October 1957 is instructive. Eisenhower sponsored the National Defense Education Act to promote the study of science, foreign languages, and area studies in universities. He established the President’s Science Advisory Committee to fund both research and infrastructure. Federal funding for research and development increased from less than 0.7 percent of the GDP in 1953 to 1.8 percent of the GDP by 1959.

That earlier era of tax policy is long gone and is about to recede even further into the past. Instead of the virtuous circle of growth, we have devolved into a vicious cycle of decline as tax and spending cuts, along with deregulation, have skewed federal policy toward the benefit of the few. More than 90 percent of Americans born in 1940 at the start of the baby boom earned more than their parents; only 50 percent of those born in 1980 will do so. By 2011, 51 percent of the population was middle-class, compared to 61 percent in 1971.

The decline in federal support for higher education has corresponded with tuition hikes at public colleges and universities; those hikes make it harder for low-income students to complete their studies and enjoy the “college premium,” the increase in pay that accrues to university graduates. In the 1970s, Pell grants for low-income students covered nearly 80 percent of the costs at a public university; by 2013-14, they covered just 31 percent. Federal research spending is once again roughly at pre-Eisenhower levels.

Lower taxes on the wealthy are irrelevant to solving these problems, and may worsen them. The decline in the marginal tax rate and in the top capital gains tax rate over the past six decades has not, according to the nonpartisan Congressional Research Service, correlated with economic growth. Instead, it is “associated with the increasing concentration of income at the top of the income distribution.” Most economists discredit the notion that lower taxes will lead to greater growth and employment. Sweden, with a top marginal tax rate of 56.4 percent, experienced a GDP growth rate of 3.2 percent in 2016, more than double the U.S. rate of 1.5 percent.

Corporations today are sitting on record levels of capital, deploying it often only to buy back their own shares rather than investing to grow the economy. Investment in the national interest is clearly and historically the role for government. Eisenhower was fond of quoting another Republican, Abraham Lincoln, on the proper role of government: “The legitimate object of government is to do for a community of people whatever they need to have done, but cannot do at all, or cannot so well do, for themselves, in their separate and individual capacities.”

Taxes are the means to this end. That burden, shared widely, will indeed make America great again. It is our best investment in the future.