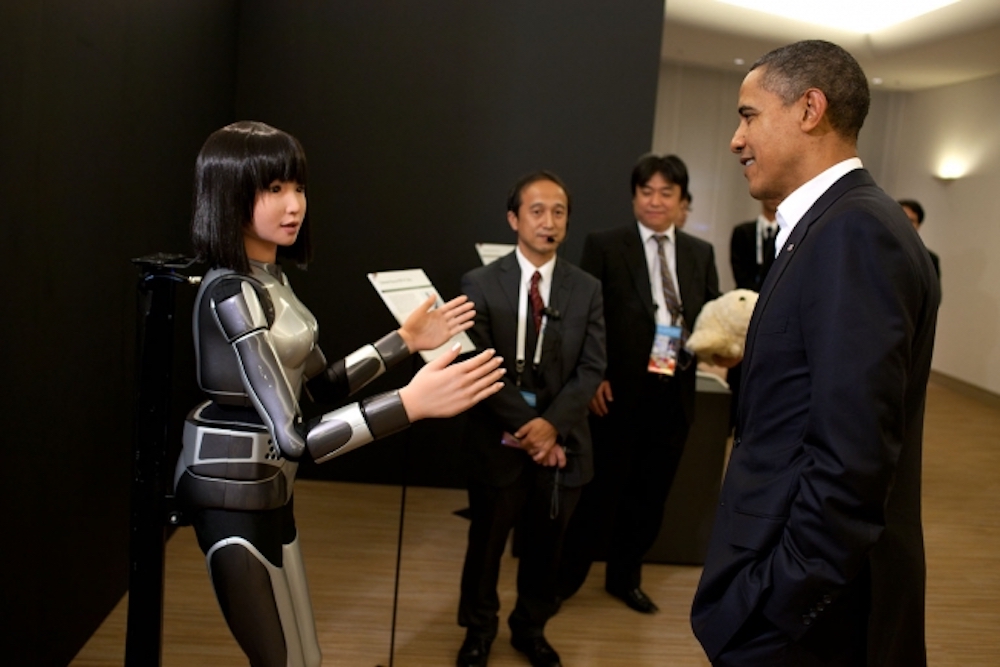 Ask experts about the future of Italy and Japan, and you won’t hear many hopeful opinions. One is destined to fall out of the Euro. The other is condemned to secular stagnation and more economic “lost decades.”

But the worst, we are told, is yet to come, because both countries have extremely low birth rates. Harvard sociologist Mary Brinton calls this “a demographic time bomb.” Italian Health Minister Beatrice Lorenzin says simply, “We are a dying country.”

Could all the experts be wrong?

Yes, and the reason is robots.

Conventional wisdom has long held that countries need enough young people to fill all the jobs left behind by retirees, and to create macroeconomic growth to finance all those retirements. A shrinking nation will have a very difficult time achieving any of those aims.

What does it mean to be shrinking? To sustain a developed country’s population, the birth rate needs to be 2.1 children per woman. In Japan, the rate is 1.4. In Italy, it’s 1.39, the lowest in Europe. In the United States, the rate is 1.86, but that’s supplemented by significant immigration. So while much of the developing world is experiencing an unsustainable population explosion, the conventional wisdom is that many Western industrialized countries face a sustainability problem from too few births.

That’s certainly the perception in Japan. This summer, the Japanese government made headlines by reporting that its population fell a record amount in 2016, by a total of 308,084 people, to 125.6 million. But the truly eye-catching number was this: Annual births dropped below one million for the first time since the government began its survey in 1979. By 2045, Japan is projected to lose 900,000 people a year, which is more than the total population of Indianapolis. Compounding the labor shortage, Japan has very strict immigration controls.

The Italian picture also is bleak, but in different ways. In Italy, fewer Italian babies were born in 2014 than in any year since the country was unified in 1861. This has been offset, recently and partially, only by an inflow of migrants, mainly fleeing Africa and the Middle East. For the last three years, the number of arrivals has been 580,000, but that’s still less than one percent of Italy’s 60 million population. Then there’s the unanswered question of where the new arrivals will work. Italy’s stagnant economy has produced high rates of unemployment, particularly among the young.

And that’s before another future trend takes hold: a devastating loss of employment due to exponential technological advances. In a groundbreaking paper published in 2013, Oxford’s Michael Osborne and Carl Frey concluded that 47 percent of all U.S. jobs are at risk of being taken over by “computerization” in the next decade or two. The futurist Martin Ford framed the problem in more frightening terms, proclaiming, in a popular book, “The Rise of the Robots.”

But while these two trends—declining births and new robot “births”—might be regarded as individually ominous, the fact that they are happening at the same time offers reason for hope. Could robots replace the workers who aren’t being born in Italy, in Japan, and across the developed world?

It will be crucial for countries to strike a balance—to make sure that the robots come on line at roughly the same rate that populations decline.

Such a replacement is not a radical idea—or a new one. As early as 1933, legendary economist John Maynard Keynes predicted the replacement of workers by machines, with massive unemployment “due to our discovery of means of economising the use of labour outrunning the pace at which we can find new uses for labour.”

The 2013 Oxford study was motivated by this prediction. It assessed the probability of job loss over the next decade or two in 702 detailed occupations in the United States. The least vulnerable jobs (less than 1 percent at risk) include athletic trainers, oral surgeons, and anthropologists. The most vulnerable jobs (at 99 percent risk) include telemarketers and data entry keyers.

The CEO of Daimler-Benz has been more explicit, predicting: “In 2030, computers will become more intelligent than humans” and “70-80 percent of jobs will disappear in the next 20 years.” There also will be some new jobs created by new technologies—but it’s unclear how long it will take them to materialize.

If this vision of the future proves true, there will be casualties, as no revolution is bloodless. The Industrial Revolution terrorized textile and agricultural workers, and the computer revolution hollowed out the middle class of most Western industrialized nations.

But the best kind of country to be during the rise of the robots is a country with a declining population. In Italy and Japan, rather than having massive numbers of human workers displaced, robots may do the work that otherwise would have gone undone.

Of course, it will be crucial for countries to strike a balance—to make sure the robots come on line at roughly the same rate that populations decline. This could mean imposing heavier taxes on families that have too many children, or excise taxes on firms that automate too quickly. The revenues would go to retrain workers for jobs that can’t easily be automated. In some cases, nations could mandate human labor for some jobs, or guarantee a universal basic income, as some countries are now debating.

The 2013 Oxford study says that workers also will have to acquire creative and social skills, areas in which computers lag behind. The bad news is that few countries are adjusting their schools and training centers in order to meet the needs of today’s technology, much less the technology of the future. Across the Western world, companies report having millions of jobs for which they cannot find qualified candidates.

If societies don’t educate people to take those new jobs, they will be filled by robots. Or by nothing at all.