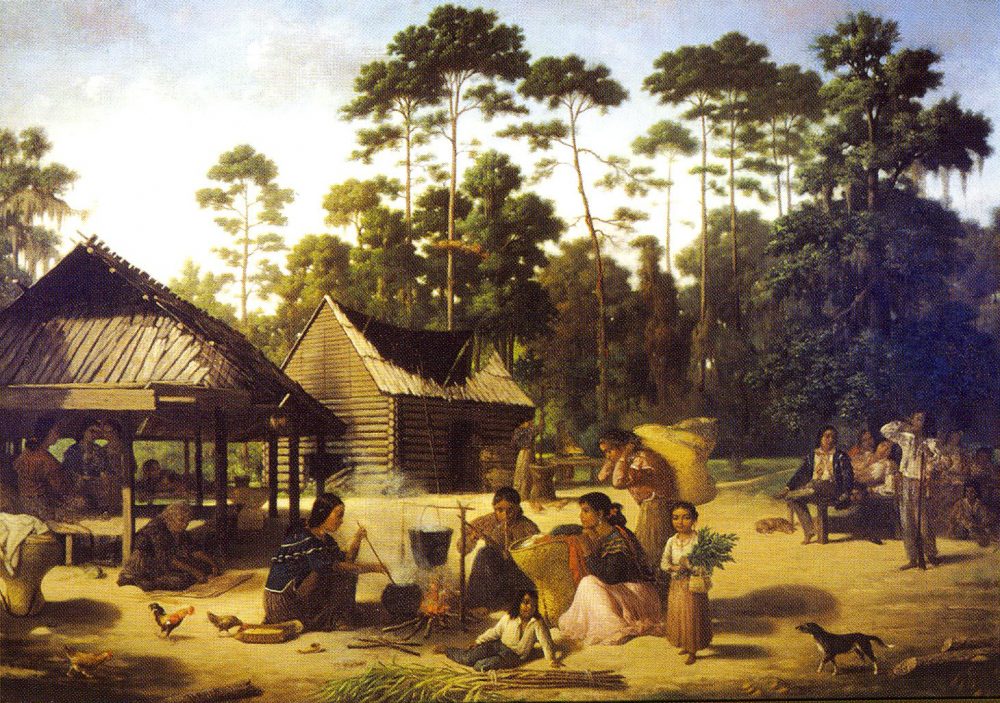 Painting of a Choctaw village, by François Bernard (1869). Image courtesy of Wikimedia Commons.

The Old South wasn’t really that old. Plantations appeared in many areas of the Deep South only a few decades before the Civil War.

Before that, the South was Indian country.

The South’s long and rich Indigenous history is unknown to many Americans. But once you look, the signs are everywhere: in Native place names (Alabama, Arkansas, Chattahoochee, Tallahassee, Tennessee); in hundreds of earthen mounds—some half-destroyed, others still towering; and in the Native communities that remain in or near their homelands.

Native people and their pasts have been marginalized in Southern history because Indian Removal, the cornerstone of Andrew Jackson’s presidency, sought to erase Southern Indians—from the land and from historical memory.

Uncovering the history of Southern Indians reveals that the Old South was more than the Confederacy and Lost Cause mythology. Before the European invasion and even into the colonial period, the South had the highest Native population density north of Mexico. And long before secessionists tried to distinguish themselves from other Americans, Native peoples of the South recognized cultural commonalities, and distinguished themselves from their Iroquoian rivals to the north by calling themselves “Southern nations.”

Southern Native women, who managed agriculture, developed specialized regional varieties of corn. Thanks to the region’s subtropical climate, they produced two crops per year. Women’s leading role in farming is probably related to the region’s matrilineal kinship system, wherein families reckoned descent through the mother and passed property and titles through the maternal line.

In time, the region’s large population, agricultural productivity, and booming trade networks gave rise to chiefdoms, nations, and even cities. The largest city was Cahokia, just east of modern-day St. Louis, which was bigger than London when it boomed around 1050 A.D. Cahokia boasted almost 20,000 residents in town and another 20,000 in the surrounding areas. It took centuries of North American colonialism for European settlers to surpass it, when Philadelphia did so in the 1760s.

Although most Americans associate the Trail of Tears exclusively with the Cherokee Nation, Indian Removal was a blanket policy aimed at “removing” all Eastern Indians west of the Mississippi River. In total, 100,000 Indians were forced to leave. Most came from the South, where settlers coveted the rich lands—potential cotton fields—still controlled by large Indian nations.

There had been removals before. Beginning in the 17th century, colonists forced some Indian nations onto small reservations after devastating wars. After the Revolution, the United States aggressively sought Indian land through warfare and treaties.

The Indian Removal Act, passed in 1830, was different. For the first time, Congress and the president used the power of the federal government to undertake removal on a massive scale. Despite objections from many corners—the U.S. Supreme Court, Indian leaders, and activists—Jackson pushed ahead, exceeding the letter of the law to achieve removal by any means.

In addition to stoking racism, Jackson persuaded U.S. citizens that removal would cost them little.

Many U.S. citizens championed Jackson’s resolve, especially the newly empowered middle-income and poor white men eager to claim the spoils of Indian country. In addition to economic demand, Jackson and his allies seized on a new racial ideology.

Formerly, most U.S. policymakers, influenced by the Enlightenment, argued that environment—culture, language, food, and education—accounted for human differences. Beginning in the 1820s, however, the new pseudoscience of phrenology declared that human differences were biological and immutable. Conveniently, white supremacists cited this theory to support Indian Removal and the growth of slavery. Contested at the time, and then firmly discredited, “scientific racism” unleashed monstrous legacies that persist to plague our present.

In addition to stoking racism, Jackson persuaded U.S. citizens that removal would cost them little. He proposed to hire private contractors, awarding each contract to the lowest bidder, with very little oversight. The resulting corruption and negligence, combined with the sheer scale of the endeavor, was what gave the “Trail of Tears” its name. One contractor who received almost $20,000 bragged to a colleague that “he had never issued a single ration.” A Seminole reported that this was typical, explaining that “rations [were] issued irregularly; when due, not delivered; and when delivered but half issued.”

Some women were forced to trade sex for food. Among the starving and poorly clad emigrants, disease ran rampant. Indian Removal coincided with America’s first cholera epidemic—sometimes 40 percent of a camp died overnight. Smallpox, influenza, and yellow fever struck, too. One U.S. official argued that medicine should be issued as a standard provision, but his superiors disagreed.

The tears did not stop once emigrants reached Indian Territory (roughly present-day Oklahoma), where famine, disease, and extreme weather heightened mortality. The suffering was so great that the federal government replaced many private contractors with U.S. Army officers, reasoning that the latter had greater experience with the logistics of mass movement. Still, about 20 percent of those forced to remove died, either on the trail or shortly after arrival in Indian Territory.

Peter Pitchlynn, whose Choctaw people were the first to suffer removal, returned to his homeland—now called Mississippi—15 years later and reflected on the transformation: “This once was a healthy country, but it is now a very sickly one & so changed that I scarcely know any of the places which were once familiar to me.” Gone were the wide-canopied forests teeming with deer, the wild canebreaks where his people had gathered reeds for baskets, and his boyhood camping ground. The only thing that had not changed much was his family home, though it was now occupied by a white family.

The disease that, in Pitchlynn’s view, had sickened and warped the country was the plantation economy. Maddened by what was then called “Alabama Fever,” whites swarmed into newly ceded Indian land—many even jumped the gun—and planted cotton. Initially, most settlers lived in modest cabins or confiscated Indian homes, but in time some grew rich. They built big houses, acquired more land, and pushed small landholders to the economic margins.

And their voracious demand for slave labor led to another massive population shift: African Americans were forced from the Eastern Seaboard and Upper South into the notoriously harsh slavery of the expanding cotton frontier. The plantation economy of the South grew so vast and powerful that it obscured most everything that came before it. Likewise, the memory of that particular South attacks most everything that has tried to replace it.

We should not underestimate the pernicious influence that the cotton curtain still exerts on race, class, and gender relations in the South and beyond. At the same time, we should also remember that the Old South was not really that old. Forged in blood and fire, the plantation economy existed across much of the Deep South for only a generation or two before the Civil War.

The South was and is a diverse place, a meeting ground of cultures, a destination for immigrants, a staging ground for different dreams. And the South is still Indian country. About 10 percent of Native people managed to avoid removal, and their descendants remain in the region.

Each year, some of their exiled kinfolk travel the Trail of Tears in reverse. They remember, and so should we all. The cotton curtain was woven to conceal other pasts and narrow possible futures, but we can push beyond it and gain a broader view.