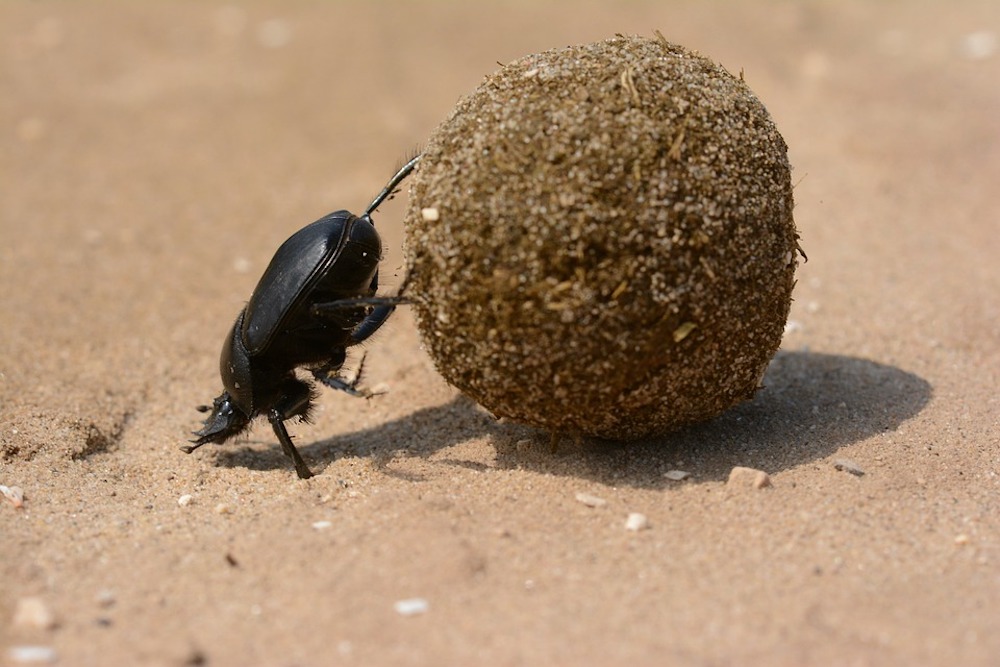 Excrement is not a dirty word. It is a fascinating process, and the start of a complex interaction of recycling and reusing. Surprisingly, in an age obsessed with recycling, we are remarkably cavalier about sloshing our bodily waste away down sewage pipes, which means that most people have, perhaps, lost touch with the environmental marvels and ecological lessons that dung has to offer.

Out in the natural world, though, no such thoughtless waste occurs, for which we can thank the 6,000 species of dung beetles that attend to excrement around the planet. These handsome, broad, powerful, chunky, glossy beetles assiduously burrow in the stuff, bury it, lay their eggs in it, eat it, and generally get rid of it before it creates a problem.

Dung beetles don’t just bring ecological balance and economic advantage; they demonstrate some of the most remarkable behaviors in the insect kingdom, including mating and nesting instincts usually only seen in birds and mammals. Consider the dung-roller scarabs, revered by the Ancient Egyptians and the subjects of many a film documentary. Their claim to fame is their mad scramble to get enough of a dropping after it has dropped. There are verified accounts of 4,000 dung beetles arriving at a pint-sized sample of elephant dung within 15 minutes, and 16,000 beetles spiriting away three pounds of the dung in under two hours.

Having sculpted out a tennis ball-sized morsel of dung, a pair of rollers—male and female—work together to get it away from the competition as quickly as possible. They set off in a dead straight line, using the sun’s light to navigate. If they meet an obstacle or barrier they may deviate briefly, but once the way ahead is clear, they resume their original heading. Some species have super-sensitive eyes adapted to using the moon’s light, which means they can work the night shift. Others can detect the direction of the sunlight’s rays even though it has sunk below the horizon. Experiments in an arena in the Johannesburg Planetarium show that some can also navigate using the faint glow of the Milky Way.

Once they are safe from ball thieves, cuckoo parasites (smaller dung beetles laying their eggs in other beetles’ balls of dung), and the general hustle and bustle of the dung site, the rollers bury their dung ball. Then they reveal why they went through all the trouble: The female lays a single egg in it. These large, careful beetles may only lay five eggs in their short lives, and they need to make sure their hatchling grubs have enough food and are safe from predators.

But the dung rollers are not the only beetles working in the dung. Some beetles, which may also work in mated pairs, dig a deep burrow, often three feet or more down, and remove morsels of the dropping into one or more small, subterranean cavities in their tunnel network. Again, when their work is done, they lay individual eggs on each dung food store. One or both beetles may stay in the tunnel, mounting guard against brood parasites wanting to lay their own eggs on someone else’s hard work.

Dung beetles are just the beginning of a whole universe of living beings that process dung and make its recycling and reuse possible.

The tunnel, the female, and the dung stores are worth fighting over, so male tunnellers often sport a variety of tusks, horns, prongs, skewers, and antlers. It’s very difficult to see such jousting matches because males do not fight above ground. In the confines of the narrow earthen corridor, however, they meet head-to-head, shimmy round 180 degrees relative to each other, and lock horns much the way the spike-and-bar projections of a hand-held bottle opener pry the cap off a bottle. These pushing and shoving battles may go on for over an hour, but eventually one beetle realizes that his opponent has the strength advantage and quietly withdraws.

To really understand how important the right dung beetle on the right dung is to the smooth running of the world, consider what happens when dung beetles are not up to the job, as happened in Australia. When Charles Darwin landed in Tasmania in 1836, he collected several dung beetles and made an astute observation: He was surprised that native beetles were in the moist pats dropped by non-native cows (introduced from Europe only 33 years earlier). The beetles had made a significant ecological leap from the hard, dry nuggets of marsupial dung to which they were adapted.

But by the 1960s, native Australian dung beetles were struggling in the mire of sticky, non-native cow pats. Pats stayed where they were laid—drying and hardening in the sun—for years, choking the grass. Choose your off-the-cuff statistic here: Each year, the dung of five cows would smother an acre of meadowland or half a million acres of grazing were lost. What’s more, parasitic worm loads in livestock were increasing as a result of all that excrement lying around. The dung contains the worms’ eggs, and these re-infect the cows if they eat contaminated grass—causing considerable morbidity, and extra veterinary bills for the farmers. On the other hand, the bush flies loved the runny dung and plagued landowners in thick dark clouds like smoke. These were grim times.

Hungarian entomologist Dr. Gyorgy (‘George’) Bornemissza noticed that the Australian meadows were disfigured with undecaying cow pats in contrast to the well-maintained fields he had grown up with back in Europe. He suggested importing Eurasian and African dung beetles more adapted to the higher water content of cow and horse dung. Between 1968 and 1984, 1.73 million dung beetles of 43 different species were reared and tested in breeding facilities and released into thousands of Australian meadowlands.

Of these, 23 species survived and bred and started to spread. Now the grasslands are gradually being brought back into useful grazing production. Droppings are being removed, bush flies are declining, cow intestinal worm rates are being reduced, and milk and beef quantity and quality are measurably improved. Similar introductions to clear up the wet droppings of non-native farm animals have also been carried out in Hawaii, Madagascar, Easter Island, Vanuatu, and New Zealand.

Dung beetles are just the beginning of a whole universe of living beings that process dung and make its recycling and reuse possible. In addition to the beetles themselves (subfamily Scarabaeinae), feeding on and in the dung as larvae and adults, there are also dung flies consuming and breaking down the dung. There are predators, parasites, and other scavengers aplenty. Later come fungi, with a new host of invertebrate species feeding on or alongside the fungus’s long branching filaments, called hyphae. The boundary between dung and soil soon blurs, and a fauna of leaf-litter woodlice, millipedes, and other tiny invertebrates continue to subsume the broken pat. Eventually earthworms take the final remains.

Each deposit, from rabbit crottel to elephant dropping, has its own rich ecological web of species and interactions. Just think, when you next pull the flush lever, what you’re missing out on.