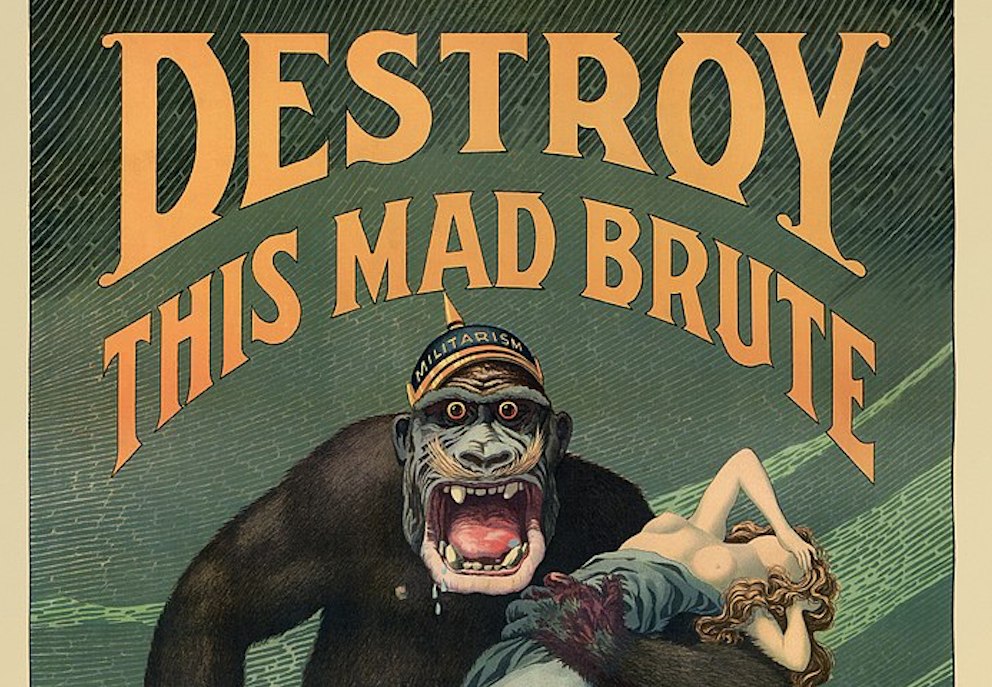 [wimbta]Woodrow Wilson did not want to go to war. On two different occasions during the weeks leading to the 1917 declaration of war that brought the United States into World War I, the president expressed reservations regarding the course he was contemplating.

Because war is autocratic, he feared that free speech and other rights would be endangered. The President told Frank Cobb of the New York World: “Once lead this people into war, and they’ll forget there ever was such a thing as tolerance. To fight you must be brutal and ruthless, and the spirit of ruthless brutality will enter the very fiber of our national life, infecting congress, the courts, the policeman on the beat, the man in the street. . . . If there is any alternative, for God’s sake let’s take it!”

Wilson’s predictions became self-fulfilling prophecies. Once the United States joined the fight against the Kaiser, Congress and Wilson’s own administration implemented legislation and surveillance programs designed to keep America safe by ferreting out subversive activity and crushing dissent—especially in states like Wisconsin, which I have studied for many years. These steps curtailed meaningful debate about how best to fight the war at home and abroad. Tolerance did indeed go out the window.

Public discourse very quickly defined a new, clear dichotomy between the righteous people of the United States and the bestial German Hun, between us and “them.” As Congress assembled for Wilson’s war message, Texas Representative Joe Eagle told the Wisconsin State Journal: “The Kaiser is a cave man with murder in his heart . . . . He is bent on the unwavering course of brute force and pillage.” The language of peace, neutrality, and forbearance had almost immediately given way to the language of war: bellicose, dehumanizing, and designed to create a noble enterprise worthy of the sacrifice of thousands of lives. Through posters, pamphlets, and movies, the nation’s propaganda office, the Committee on Public Information, spread the message of the righteous war against the evil Hun.

Official and vigilante actions, as well as social pressure, made debate and dissent difficult—particularly in Wisconsin, where during World War I at least 38 percent of the state’s population had Germanic heritage (and thus was immediately suspect.) In Ashland, Wisconsin, the Loyal Knights of Liberty tarred and feathered at least four men they deemed disloyal. Letters sent to other individuals in the community made clear the importance of behaving as loyal Americans. In northeastern Wisconsin a bartender was heralded as a patriot for assaulting a patron who spoke ill of the army. The victim of this assault was referred to federal authorities.

Throughout the state, individuals who criticized the government or refused to buy war bonds could wake up to find their home painted yellow, or a sign posted labeling them as “slackers.” Hundreds of these and similar actions, which were reported faithfully in the local newspapers and to the federal Bureau of Investigation (precursor to the FBI,) made clear that comments critical of the war should be kept to oneself. To help find traitors, the Bureau of Investigation started the American Protective League, an organization of volunteers who spied and informed on their neighbors.

The Espionage Act of 1917 provided an ideal tool with which to attack disloyal speech. During the war, 90 people in Wisconsin were indicted for 183 violations of the Espionage Act. The most common infractions were praising Germany; criticizing the United States; calling the conflict a “rich man’s war”; criticizing Liberty Bonds, the Allies, charities, or food laws; obstructing military recruiting; insulting the flag or uniform; or praising a ship’s sinking.

Wisconsin U.S. Senator Robert M. LaFollette became a special target. He fought for rational wartime policies in keeping with his progressive vision for America. Throughout the war, he regularly voted for measures necessary to support the troops, but opposed conscription and financing the war on the backs of average Americans. Instead of deficit spending supported by selling war bonds, he favored taxing the corporations and the individuals who were getting rich on war production. The war made him an outcast among his Senate colleagues and the symbol of traitorous behavior on the home front.

In September 1917, the Associated Press misquoted LaFollette as saying that the United States “had no grievances” against Germany. Despite clear proof that he was misquoted, his Senate colleagues dragged LaFollette through 15 months of hearings under threat of expulsion. Only after the war ended did the Senators finally acknowledge that they were chasing a red herring. The war left Robert M. LaFollette exhausted, his reputation in tatters. His pursuit of positive reform during wartime made him anathema to “patriots.” But for those individuals in Wisconsin and nationally who found it difficult to speak out, LaFollette became a hero.

LaFollette escaped legal sanction, but Victor Berger, a founder of the Socialist Party of the United States, editor of the Milwaukee Leader newspaper and former congressman, became a prime government target, caught in the net of the Espionage Act. Immediately following the declaration of war by the United States, the Socialist Party called upon “workers of all countries to refuse support to their governments in their wars.” In Wisconsin, as in other states, socialists found their meetings disrupted, their speakers jailed, and supporters intimidated by local law enforcement and vigilante super patriots. One socialist leader was arrested for “seditious talking.” The Wisconsin State Senate expelled the German-born socialist Frank Raguse, who represented Milwaukee, for a negative remark about patriotism.

The chairman of the party in Kenosha was jailed shortly before he was scheduled to speak at a rally and was released after the rally was canceled. In the community of Theresa, 600 members of the Wisconsin Loyalty Legion prevented socialist Emil Seidel, former mayor of Milwaukee, from speaking at what they considered a pro-German meeting. In Sauk County, socialist journalist Oscar Ameringer was protected from loyalist “visitors” by farmers armed with pitchforks. Whether by indictment or intimidation, the result was the same: abrogation of free speech and stifling of policy debate.

The Espionage Act of 1917 provided an ideal tool with which to attack disloyal speech. During the war, 90 people in Wisconsin were indicted for 183 violations of the Espionage Act.

As editor of the Milwaukee Leader, Berger tried to accomplish the near-impossible: remain true to socialism but avoid running afoul of the Espionage Act. Berger’s newspaper maintained its steady attack on capitalist war profiteering. He emphasized his opposition to the war, but he made a point never to advocate resistance or interference with the war effort. The strategy failed. In an attempt to destroy the newspaper, the Post Office Department restricted distribution of the Leader. In the spring of 1918, Berger was indicted under the Espionage Act based on five editorials he wrote for the Leader. In 1919 he was found guilty and sentenced to 20 years in prison. Two years later, an appellate court threw out his conviction due to biases exhibited by the judge during his trial.

Just as Woodrow Wilson feared, the war brought repression to those who voiced opposition to government policies—at just the time debate over those policies was needed most. Although real spies and saboteurs threatened the United States during the war, they were seldom homegrown and seldom members of Wisconsin’s large German-American community.

Governor Emanuel Philipp, a Republican, was an important voice against this repression. He believed in the loyalty and patriotism of the entire state regardless of ethnicity, and routinely told audiences: “There is nothing wrong with Wisconsin.” In his most strident denunciation of super patriots, Governor Philipp declared that the willingness to charge others with disloyalty “is a type of impudence that is indulged in by a class of self-asserted patriots who are the greatest menace to the country today, because they discourage what the country needs above all things during a crisis, and that is the hearty cooperation of all the people in support of the war.”

It is all too easy to limit free speech in wartime. Such limits threaten American democracy far more than the speech they target.