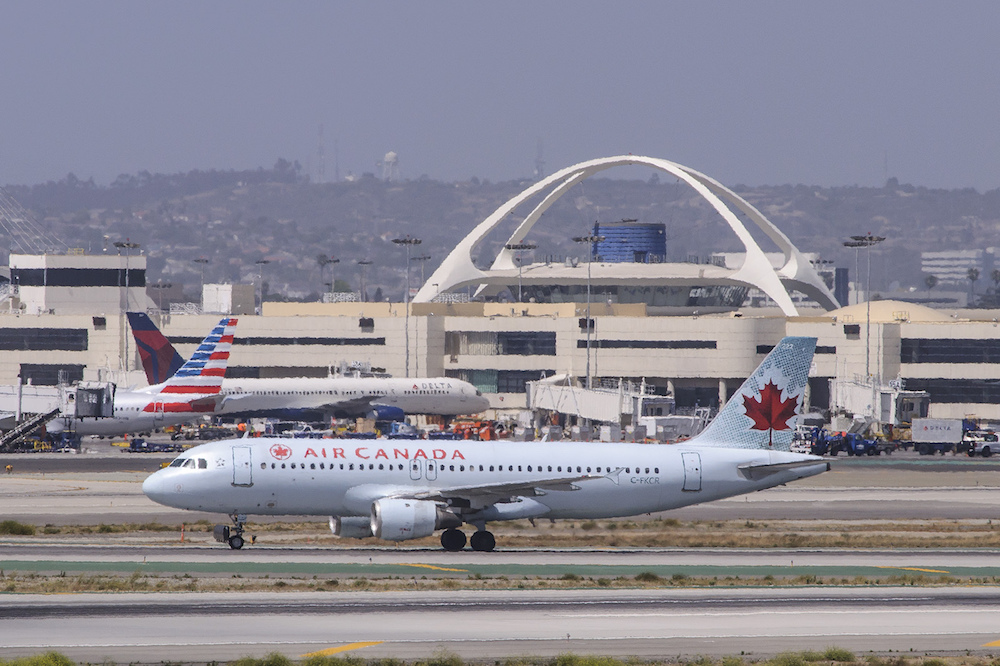 An Air Canada jet arriving from Toronto at LAX, May 25, 2013. Photo courtesy of Wikimedia Commons.

Let’s give the Coachella Valley to Canada.

After all, Canadians already run the place in winter.

Over the past 40 years, snowbirds from the True North have grown into a winter fixture in greater Palm Springs. They get a lot more than an escape from cold winter weather. The California desert is a much shorter flight than Maui, and it offers an array of arts and culture—from the Palm Springs International Film Festival, to the design-focused Modernism Week, to the famous Coachella music festivals in Indio—that Phoenix can’t hope to match.

Over time, the desert has developed a Canadian-friendly infrastructure of restaurants, country clubs, and social organizations. The Desert Sun carries stories about Justin Trudeau and Vancouver Canucks hockey. La Spiga, once a top restaurant in Edmonton, is now open here. In some years, there’s even been a Canada Fest.

Coachella has also developed a Canadian civic life, with leading politicians from western Canada, particularly Alberta, spending stretches of the winter here. The Canadian Club of the Desert, founded in 1982 at the Gene Autry Hotel in Palm Springs, holds monthly breakfast forums “sharing experiences and ideas concerning issues of importance to Canadians.” (Curious Americans are also invited to attend.) The club organizes field trips to Southern California museums, holds tailgate parties before matches at local polo grounds, and hosts both a “Welcome Back Cocktail Party” in early December and “A Wind-Up Dinner and Dance” in late March, at the Canada-friendly Lakes Country Club.

It was the Great Recession that accelerated this Canadianization of the California Desert. In 2008, western Canada’s economy was booming, Canada’s baby-boomers were beginning to retire, and the Canadian dollar was at all-time highs, achieving parity with the U.S. dollar. At the same time, the inland California real estate market was in freefall—allowing Canadians to snap up properties cheaply in a place where your toes don’t freeze in February.

So many thousands did, that, in the first four years of this decade, Canadian buyers accounted for one-quarter of home purchases in the desert. And home sales are just one piece of the crucial stimulus that Canadians provided for a struggling region.

Canada is responsible for an estimated 450,000 visitors to the valley each year; the Canadian government has taken credit for tripling the population of Palm Springs during the heart of winter. The Canadian hordes have provided crucial ballast for faltering businesses; the Palm Desert Country Club and the Tilted-Kilt franchise in Palm Desert were rescued from bankruptcy by Canadian business people. Canadians have also fueled the expansion of Palm Springs International Airport, which boasts direct service to Toronto, Vancouver, Calgary, Edmonton and Winnipeg.

The Canadian Invasion has stirred only minor resentments. Restaurant servers say they could tip better. Canadians are blamed for—or credited with, if you take a public health perspective—making traffic slower, given their strange national proclivity for obeying posted speed limits.

But the biggest problem with Coachella’s Canadianization is that it isn’t as big and strong as it should be.

The Coachella Valley could get even more of an economic and cultural boost if more Canadians could visit more, buy more homes, and stay longer. But Canadians are welcome here only part-time. That’s because our bullying federal government imposes its complicated tax and immigration systems on you if you spend too much time here.

While the details are complicated, many Canadians in Coachella limit themselves to just 182 days a year, to avoid U.S. taxes and immigration restrictions. Spend 183 days here—more than half the year—and you can be considered a U.S. “resident alien” and be forced to pay U.S. taxes on all your global income.

This hurts California, since our Canadian visitors and part-time residents pay state and local taxes, while using relatively little in services.

Canadians are blamed for—or credited with, if you take a public health perspective—making traffic slower, given their strange national proclivity for obeying posted speed limits.

A Canadian couple who split their time between Indio and British Columbia (I am not naming them to spare them any federal government hassles) contacted me recently to point out that they have come to the Coachella Valley every year since 1984, and have owned homes here since 2003.

Their California property taxes, they note, are 180 percent higher than those in their home Canadian province. As six-month residents, they spend more time here than they do in Canada, but make no social service demands. They even buy extra travel and health insurance, they said, “to ensure that we can protect ourselves against the bankrupting cost of medical services here.”

So why shouldn’t they be able to stay longer?

“We are welcome here for 182 days, then we become ‘alien,’ and must depart,” they said. “We can own property but not weapons. We can pay every tax but not vote. We can patronize retail merchants but cannot win a prize for responding to surveys …. We commit no crimes. We buy media but seldom appear in it. We are a potential resource, never a threat.”

Recent declines in the Canadian dollar have made them less of a resource; Canadian spending, hotel stays, and vacation home rental all have slipped slightly from their highs earlier in the decade. The California housing shortage, and the soaring home costs that come with it, have made buying here harder for everyone, including our neighbors to the north. (Still, median home prices in the desert are less than half of what it costs to buy in Vancouver or Toronto.)

But this doesn’t mean we should give up on Canadians. To the contrary, California should be making it easier for more of them to come to the Coachella Valley, and to stay longer. Imagine if federal law were changed to make it possible for Canadians to spend nine months a year in California, rather than six months, without triggering U.S. residency rules and taxes. That would be 50 percent more time, and much more spending and sales taxes from Canadians. Building more homes—something California desperately needs to do—would open the door to more Canadian stimulus as well.

Could this happen? Maybe not. The federal government is hostile to policies that benefit California, and the NAFTA agreement that binds together our economy with Canada’s is in jeopardy. But Congressional Republicans are open to tax reform, and President Trump, despite his hostility to immigrants, has indicated he’s more favorably disposed to newcomers from wealthier and whiter countries like Canada.

Perhaps, if the feds won’t make things easier for Canadians in California, the state could step in.

Maybe the desert heat is getting to me, but I can’t help wondering if California might just deed the Coachella Valley to Canada. Not only would we get more Canadians but we’d get a better system of government that has produced an expanding middle class in that country. We’d also get a bit of insurance: If the federal government escalates its ongoing war against California, Californians would only have to drive to Palm Springs to ask for asylum.

A Canadian colony in California might not be paradise. But it sounds pretty good, eh?