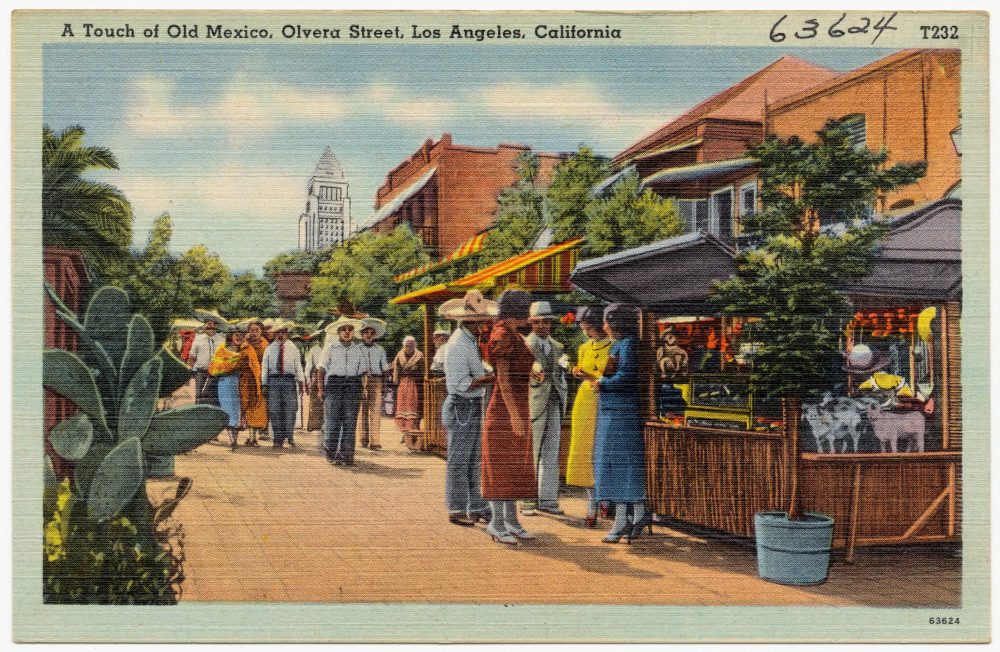 Los Angeles is a great many things, but it is not Latin America.

Such a statement should be as uncontroversial as a map of the Western hemisphere. But today, elite conventional wisdom runs the other way.

Lewis D’Vorkin, the editor of the Los Angeles Times, recently promoted L.A. as “the northern capital of Latin America” in a memo to staff. He may have been repeating a formulation that was employed by organizers of L.A.’s recent bid for the Summer Olympics.

And in its latest Pacific Standard Time series, the Getty Foundation has supported more than 70 exhibitions—at arts institutions from Santa Barbara to San Diego—under the title: “LA/LA”—for Latin America and Los Angeles. In its publicity material, the Getty calls Los Angeles “a Latin American city of long duration.”

I’ve seen more than two dozen of the “Pacific Standard Time: LA/LA” exhibitions in person, and have marveled at the wondrous examples of art from both Latin America and Southern California. But the exhibits demonstrate precious little overlap, and few deep connections, between Latin America and L.A.

Most of the exhibitions don’t even attempt to make the link—they simply pick a side and offer a rich experience in the process. Some choose to display a Latin American story (Afro-Brazilian art from Salvador, Bahia; an overlooked Argentine artist; a Huntington Library survey of Latin American landscapes), while others choose Los Angeles art (many of the strongest are about murals, design, or architecture in Southern California).

This shouldn’t be seen as a failure, of course. It’s just reality: Los Angeles isn’t actually a part of Latin America—or of anyplace else.

Yes, L.A. has a Spanish colonial and Mexican past. And yes, it has long been an artistic and film center that draws Latin American artists. And nearly half of Angelenos either are immigrants from Latin America or their descendants.

But Los Angeles, for almost its entire history, has been a walled-off and peculiar place. It isn’t even the capital of California, despite being the state’s largest city. And when famously fluid Los Angeles has bothered to define itself, it has done so in opposition to the world—and to Latin America in particular.

L.A.’s isolation—geographically, culturally, economically—is its most distinguishing characteristic. Helen Hunt Jackson, author of the 19th-century novel Ramona, famously termed it “an island on the land.” The 20th-century California chronicler Carey McWilliams borrowed Jackson’s line for the title of his 1950 classic book on L.A., in which he wrote that Southern California “is as distinct, as unlike any other part of the state, as though it were another country.”

That distinctiveness is rooted in a very dark story: When whites built Los Angeles as a “city of the future” they nearly obliterated its Mexican history and Mexican-American people. As the historian William Deverell wrote, “Understanding Los Angeles requires grappling with the complex and disturbing relationship between whites, especially those able to command various forms of power, and Mexican people, a Mexican past, and a Mexican landscape.”

Unfortunately, that whitewashing left a permanent separation. In his 1950 book The Labyrinth of Solitude, the Mexican author Octavio Paz described the city as having a “vaguely Mexican atmosphere” that was present but distant, like it was “floating” in the air.

“I say ‘floats’ because it never mixes or unites with the other world, the North American world based on precision and efficiency,” Paz wrote. “It floats, without offering any opposition; it hovers, blown here and there by the wind, sometimes breaking up like a cloud, sometimes standing erect like a rising skyrocket. It creeps, it wrinkles, expands and contracts; it sleeps or dreams; it is ragged or beautiful. It floats, never quite existing, never quite vanishing.”

Today this city still floats in that nebulous way, without quite landing. L.A. may pride itself on its diversity, but the town’s culture is still ruled by a Hollywood that remains predominantly white. Indeed, the center city and Westside—the parts of Los Angeles most familiar to people around the world—are far whiter than the United States as a whole.

Los Angeles, for almost its entire history, has been a walled-off and peculiar place. It isn’t even the capital of California, despite being the state’s largest city.

Cheech Marin, the actor-musician-director and leading collector of Chicano art, recently said that while L.A is not a Latin American city, it is a profoundly Latino one. But as immigration diminishes, its Latinos are becoming less Latin American. Today, more than 60 percent of L.A. County’s Latinos are native-born, and Spanish is losing its hold.

If you want to see a truly Latin American U.S. city, you should visit Miami.

L.A.’s population trends work against Latinization. One of the two biggest demographic stories in Los Angeles in this century has been the rapid decline in the number of children, including Latino children (L.A. is the only major American city to see such a decline). The other big story is the increase in the city’s number of whites—up nearly 40,000 between 2010 and 2014—outpacing the rise in the number of Latinos.

Since the 1990s recession, when Southern California suffered devastating losses in the economic sectors that employed immigrants, Latin American immigration has dramatically declined, while the regional economy has tilted away from Latin America.

Certainly, L.A. is a center of international trade, but that trade is dominated by East Asia. Mexico is the third-largest trading partner of the United States, and the top destination for California exports, but ranks 10th as an L.A. trading partner, behind Germany and, in some years, Australia.

The weakness of ties between L.A. and Latin America now seems like a vulnerability, as the California-hating Trump administration deports immigrants and seeks to separate the United States from the rest of the world. León Krauze, a Mexican journalist who is an anchor at Univision in Los Angeles, says the threat of Trump will force closer ties, as Angelenos and Latin Americans realize they must be allies in protecting immigrants from the U.S. government.

At the same time, there is something cynical about the “L.A. is Latin America” messages of L.A.’s elites. Many Southern California institutions have celebrated prominent Latin Americans while being slow to include L.A.’s own Latinos. Take the motion picture academy, which has been giving Oscars to film directors from Mexico—Alfonso Cuarón, Alejandro González Iñárritu, and, perhaps soon, Guillermo del Toro—while doing little for Latino filmmakers. The city’s arts institutions have celebrated the L.A. Philharmonic’s Venezuelan conductor Gustavo Dudamel with a passion they rarely show Latinos here. This can feel like 21st-century whitewashing.

Still, it would be wiser—and more productive—to embrace the “Latin American–Los Angeles” narrative as aspirational, and work toward that goal. After all, Los Angeles would have much to gain from deeper ties to a region on the rise.

Latin America in recent decades has become a more democratic place (despite some backsliding). Mexico has grown its middle class and its numbers of college-educated people, even as L.A.’s middle class shrinks and its education levels stagnate.

But building those ties would take difficult and sustained work. In L.A., that should include creating more places where people can preserve and learn the Spanish language. And more broadly, making L.A. a Latin American city would mean defying the federal government to make it easier for Latin Americans to visit, study, and live here—and for Angelenos and other Americans to live in Latin America.

Our goal should be the establishment of a Western Hemispheric Community, allowing free trade and free movement of people, of the type we’ve seen only in Europe.

But, before doing that, Los Angeles would have to obliterate the walls that surround it, and not just those put up by the man in the White House.