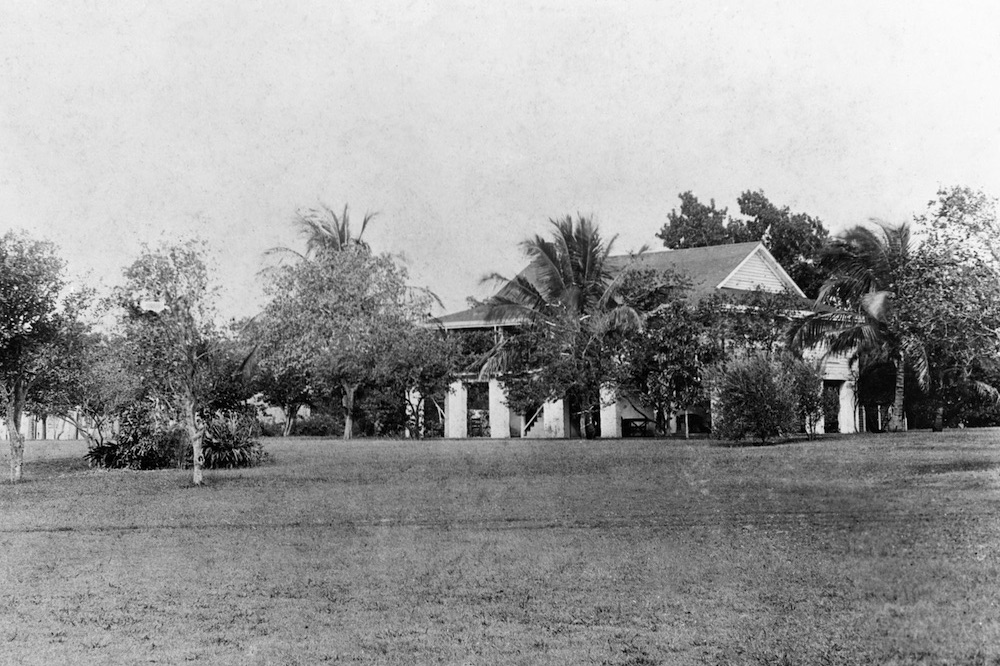 Julia Tuttle’s home, constructed by enslaved Africans in the 1830s and used as a military fort during the Seminole Wars. Photo courtesy of State Archives of Florida, Florida Memory.

Miami is widely known as the “Magic City.” It earned its nickname in the late 19th and early 20th centuries, shortly after the arrival of Henry Flagler’s East Coast Railroad and the opening of his opulent Royal Palm Hotel in 1897. Visitors from across the country were lured to this extravagant five-story hotel, at the edge of the nation’s southernmost frontier. From their vantage point, South Florida was the Wild West—and Miami could only exist if incoming settlers were able to tame it. And tame it they did. Miami’s population boomed, from roughly 300 in 1896 to nearly 30,000 in 1920. Onlookers marveled as the “metropolis” seemed to emerge overnight from the “wilderness.”

This legend, repeated for more than a century, blends truth with fiction, and reminds us that history is as much about forgetting as it is about remembering. Flagler and a woman named Julia Tuttle stand at the center of the story: The importance of Flagler’s East Coast Railroad and Royal Palm Hotel led some residents to propose naming the city after him, and he is often depicted as the city’s “father.” Tuttle, a businesswoman who lured Flagler to Miami and otherwise promoted the region during the 1890s, earned the title of “Mother of Miami.” But Tuttle and Flagler did not create something out of nothing. On the contrary, Tuttle’s home and Flagler’s hotel stood precisely where earlier settlers had already left indelible marks over 2,000 years of continuous occupation.

These Miamians included Tequesta Indians who lived in the area for more than 1,500 years, and Spanish missionaries who tried to convert them; African enslaved persons tasked with turning the land into sugar fields, who instead created orchards of fruit trees; Seminole Indians who came to trade and harvest the local bounty, and U.S. soldiers who waged a war to exterminate them; and a continuous stream of Bahamian mariners, fugitive soldiers from various armies, and shipwrecked sailors. These earlier generations have been forgotten largely because Tuttle and Flagler were master illusionists who engaged in a combination of physical sleight of hand and intellectual misdirection. Rather than create something out of nothing, they built upon the storied history that preceded them—and then helped others forget it. 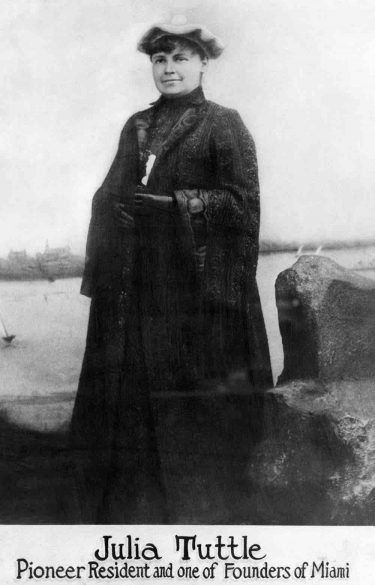 Tuttle clearly knew that she was not the first occupant of her waterfront property. Recently widowed, she relocated in 1891 from Cleveland to the mouth of the Miami River on Biscayne Bay, where she worked tenaciously to promote the region as a commercial and agricultural opportunity. Tuttle moved into a 19th-century plantation house that had been built by enslaved Africans in the early 1830s, and constantly referred to it as “Fort Dallas,” which had been the name given to it when it was turned into a military outpost during the Second Seminole War (1835-1842). Tuttle’s property contained a man-made well, a stone wall, and several gravestones. There was a decades-old road that connected her home to the community on the New River—today’s Fort Lauderdale—and elsewhere up the Atlantic coast.

Still, despite all this evidence of earlier occupation, Tuttle declared to all who would listen that she was a founder of a new community. In words that would be widely repeated, she explained her ambitions. “It may seem strange to you but it is the dream of my life to see this wilderness turned into a prosperous country,” she wrote. One day, she hoped, “where this tangled mass of vine brush, trees and rocks now are to see homes with modern improvements surrounded by beautiful grassy lawns, flowers, shrubs and shade trees.” Tuttle wanted to “settle” a place that had been settled for centuries and turn it into an agricultural or commercial entrepôt.

James Henry Ingraham, president of the South Florida Railroad Company of the Plant System, was but one of the newcomers she impressed. Ingraham proclaimed that Tuttle had “shown a great deal of energy and enterprise in this frontier country where it is almost a matter of creation to accomplish so much in so short a time.” But his description of Tuttle’s efforts, too, revealed the preexisting history that made her successful. Tuttle, he wrote, “converted [Fort Dallas] into a dwelling house after being renovated and repaired with the addition of a kitchen, etc. The barracks … is used as office and sleeping rooms.” Despite her “improvement … on hammock land which fringes the river and bay,” Ingraham explained, the natural world remained largely untamed. “Lemon and lime trees,” which were planted by the earlier waves of Spanish, Bahamian, and American occupants, “are growing wild all through the uncleared hammock.” Ingraham, Tuttle, and others knew that citrus was not native to South Florida. Their claims about untamed wilderness were disingenuous.

Tuttle ignored evidence of the ancient Indian world that surrounded her. Like others of her generation, she recorded the presence of several large man-made mounds and shell middens in the area. Some were ancient burial sites or ceremonial centers, and others were basically landfills, built from generations of discarded shellfish and tools. They were all constructed by the Tequesta Indians, who had first settled the waterfront site 2,000 years earlier and lived there into the 17th century, when they attracted the unwanted attention of slave raiders, Spanish missionaries, and others moving in. Tuttle, like others who declared themselves to be on the frontier, deemed the Indian past to be inconsequential to the development that would follow.

With Tuttle engaged in acts of intellectual misdirection, Flagler and his construction crews took care of the physical destruction. Flagler, like most Gilded Age industrialists, is more typically associated with building than with razing. He earned his fame for helping found Standard Oil with John D. Rockefeller in 1870 and then creating Florida’s modern tourist industry with his railroad and luxury hotels in St. Augustine, Palm Beach, and elsewhere along Florida’s Atlantic Coast. Tuttle lured Flagler to Miami with gifts of orange blossoms after a brutal frost had destroyed the citrus crop in central Florida, and clinched the deal by dividing her property on the Miami River with him.

Tuttle and Flagler were master illusionists who engaged in a combination of physical sleight of hand and intellectual misdirection.

In 1896, Flagler’s laborers at the mouth of the river leveled the ancient Tequesta mounds that stood in the way of progress. They were unabashedly brutal about it. One of the workers noted that a burial mound “stood out like a small mountain, twenty to twenty-five feet above water” and “about one hundred feet long and seventy feet wide.” Flagler’s African American workers struggled to remove “a poison tree” that grew on the top of the mound, as it “would knock them cold.” Those workers “who were not allergic to it” leveled the mound, uncovering and hastily removing “between fifty and sixty skulls.” One of the workers took home the bones, “stored them away in barrels and gave away a great many … to anyone that wanted them.” When construction ended, he dumped the remaining skeletons “nearby where there was a big hole in the ground.” Another bayside mound was hidden behind a “great tangle of briars and wild lime trees.” The midden materials from these and other mounds were strewn across the property, becoming the foundation for Henry Flagler’s opulent Royal Palm Hotel.

The city of Miami incorporated in July 1896, a bit more than a year after the railroad reached the site of the Royal Palm Hotel. Thanks to the vision of Tuttle and marketing genius of Flagler and others, Miami quickly became a tourist destination. City boosters built roads and canals, plotted new communities, constructed man-made beaches, and established new civic organizations. The real estate boom that followed incorporation pushed the residential community out from the mouth of the river and in only a couple of decades turned the small town into a bustling city. Tuttle died in 1898 and Flagler in 1916, but their collective imprint on Miami survived the hurricane of 1926, even as it destroyed the Royal Palm Hotel and temporarily slowed the city’s growth during the Depression. Miami remained a city committed to reimagining the future rather than one interested in celebrating the past.

Tuttle and Flagler shared an illusion that they were settling untouched wilderness—even as they were surrounded by evidence of earlier occupation. In this way, their story is no different than those of settlers across the continent whose shared myth of the frontier allowed them to ignore the history that preceded them. In the 1880s, the frontier was a fairly simple but magical idea: It allowed white Americans to ignore the ancient history of Native America. The myth of the frontier—that pervasive and most-American idea—allowed Tuttle and others in Miami to see “unclaimed lands” in the United States as an untapped and disappearing resource, and to imagine that white American ingenuity transformed wilderness into civilization.