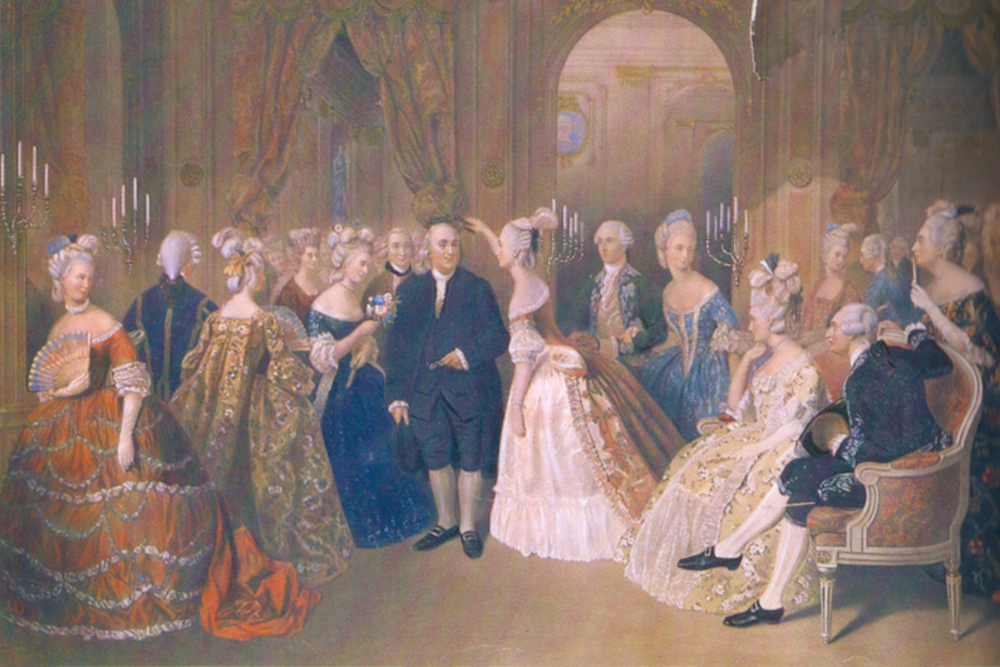 Benjamin Franklin surrounded by the ladies of the French court. Image courtesy of Wikimedia Commons.

In the midst of the American Revolution, Benjamin Franklin envisioned the turkey as an exemplar of the ideal American citizen. In a 1783 letter home to his daughter Sally, written while Franklin was serving as chief diplomat to France, he wrote about the “ribbons and medals” presented to the French by grateful Americans in thanks for significant military and financial support. The tokens bore an image of an eagle—but, Franklin explained, some recipients complained that the workmanship was not up to sophisticated French standards. They thought that the eagle looked more like a turkey.

Franklin asserted that this plucky fowl would have been a better choice in the first place. Eagles were found in many countries, but the turkey was an American native and “a bird of courage,” a fitting symbol of America’s valor and virtues. It “would not hesitate to attack a grenadier of the British Guard who should presume to invade his farm yard with a red coat on,” he wrote to Sally. Turkeys were tasty, too, Franklin further explained to her, first brought to France by the Jesuits and served to citizens of note including “at the Wedding Table of Charles the ninth,” in 1570. Some 200 years later, Franklin had served turkey to guests of his own in Philadelphia, and now the sumptuous fowl were often on his diplomatic table in Passy, France. Ever practical, Benjamin “Waste not, want not” Franklin clearly appreciated that a bird of taste and courage could nourish both the body and spirit of the nation.

I write about food, using it as an interpretive tool to understand history and historical figures, so I was delighted to see that Benjamin Franklin liked writing about the topic as well, in his letters and political articles. Franklin realized the impact that foods—particularly, native foods—had in building the identity of a new nation. By the time he wrote that letter to his daughter praising the courage of turkeys, Franklin had pondered and promoted the idea of an American identity for more than 40 years, first as a loyal colonist, later as an emerging patriot, and then as one of the nation’s founders. He championed the things that set his homeland apart from its English and European heritage. Out of his ponderings he would come to define the essential American persona and the ingredients of American success. American geography and its bounty, including its food, were central to the recipe.

Franklin recognized American potential early. In his 1751 essay Observations Concerning the Increase of Mankind, written 25 years before the Declaration of Independence, he explained, “so vast is the territory of North America, that it will require many ages to settle it fully; and, till it is fully settled, labor will never be cheap here, where no man continues long a laborer for others, but gets a plantation [farm] of his own, no man continues long a journeyman to a trade, but goes among those new settlers, and sets up for himself, &c.” Franklin contrasted this vista of opportunity with life across the Atlantic, where “Europe is generally full settled with husbandmen, manufacturers, &c. and therefore cannot now much increase in people ….”

Throughout his political and diplomatic career—including 26 years spent in England and France, before and during the American Revolution—Franklin worked hard to convey the strengths of the American setting and the American character. He became a celebrity when he lived near Paris from 1776 to 1785, his image adorning all manner of objects. People felt as though they knew him personally, and he would happily answer their questions about America.

Often, his message was that success in America required persistent hard work, and that no one should travel to the New World unprepared for the challenge. “Many I believe go to America with very little; and with such romantic schemes and expectations as must end in disappointment and poverty,” Franklin wrote in another 1783 letter to Sally and her husband Richard Bache. “I dissuade, all I can, those who have not some useful trade or art by which they may get a living; but there are many who hope for offices and public employments, who value themselves and expect to be valued by us for their birth or quality, though I tell them those things bear no price in our markets. But fools will ruin themselves their own way.”

Products of the land fit easily into Franklin’s vision of American industriousness and greatness. When he lived in London and worked as an agent for the Pennsylvania Colony, in two postings between 1757 and 1775, his wife Deborah sent him a wide variety of his favorite American foods: smoked wild venison, home-cured hams, and dried peaches—he preferred those dried without the peel. She sent kegs of cranberries, which caused great wonder among Franklin’s landlady’s kitchen staff. Deborah shipped barrels of her husband’s favorite Newtown Pippin apples, an American native variety famed for its superior keeping qualities. She sent grafted trees for planting on Franklin’s friends’ estates, symbols of the productive exchange of ideas and commerce he sought to encourage between the Colonies and the Crown.

Out of his ponderings [Franklin] would come to define the essential American persona and the ingredients of American success. American geography and its bounty, including its food, were central to the recipe.

But it was maize, the primary American grain, that was Franklin’s most ideologically impactful import. Shared by Native Americans with the pilgrims and, now, after more than 100 years of European settlement, widely cultivated on farms across the colonies, this “Indian corn,” as it had been commonly known, was often praised by Franklin for its taste and variety of uses. Deborah’s packages included dried or parched corn kernels, cornmeal, and nocake—a flour made from parched corn that Franklin’s London cook probably used to make pancakes. In letters home to Philadelphia, Franklin thanked Deborah for the corn meals and flours she sent: “For since I cannot be in America, every thing that come from thence comforts me a little, as being something like home,” he wrote, noting specifically that, “The nocake proves very good.”

Benjamin Franklin often considered the essence of his homeland from afar, especially as the 1760s brought the disintegration of the mutually supportive and respectful relationship between England and its American Colonies, which he and other patriots had sought to cultivate. In 1764, during the height of the Stamp Act controversy, Franklin, then living in London, wrote several letters to the editor using pen names such as “Homespun” to make the case for the Colonies. Again, his thoughts turned to corn. He employed it as a metaphor to dramatize the differences between the dynamic, diverse American settlements and the staid English homeland.

In one essay published in several London newspapers in early January 1764, Franklin contrasted the essential American grain’s virtuosity and variety with the limitations of lowly English wheat. “[Maize] is one of the most agreeable and wholesome grains in the world; that its green ears roasted are a delicacy beyond expression; that samp, hominy, succatash, and nocake, made of it, are so many pleasing varieties; and that a johny or hoecake, hot from the fire, is better than a Yorkshire muffin.” Franklin continued saying that British essay writers who preferred “the roast beef of Old England” and condemned corn as “disagreeable” and “indigestible” without even tasting it, suffered from a misguided sense of superiority. He saw their snobbery as a metaphorical parallel to the Crown’s (faulty) assumption that it understood American people and possibilities, and thus knew best how to rule the colonies.

The first shots of the Revolution were at the battle of Lexington and Concord in April 1775, and in June and July of 1776 members of the Continental Congress wrote and signed the Declaration of Independence, with its aspirations to “life, liberty, and the pursuit of happiness”—truths that were, in the word Benjamin Franklin himself wrote into that founding document, “self-evident.” Franklin would spend the next 10 years in France promoting American freedom and possibilities.

After the war, when an old English friend, the Earl of Buchan, sought resettlement advice, Franklin told him that, “The only encouragements we hold out to strangers, are a good climate, fertile soil, wholesome air, and water, plenty of provisions and fuel, good pay for labor, kind neighbors, good laws, liberty, and a hearty welcome. The rest depends on a man’s own industry and virtue.”

Franklin cautioned that America’s streets were not paved with gold. But, he might also have added, the new nation’s fields and orchards were indeed filled with delicious turkeys, exceptional apples, and golden grains of opportunity.