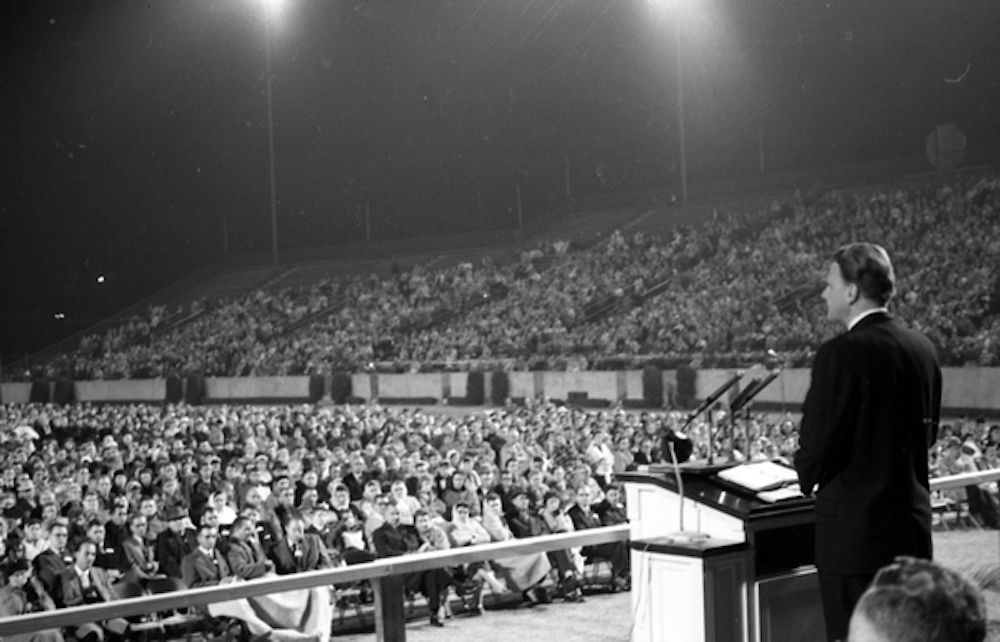 I can remember that thundering voice coming out of our radio in the 1950s as the preacher wove points from Scripture into his sermon, urging listeners to come to Jesus. It was Billy Graham, the man dubbed “America’s Pastor” and “God’s Super-salesman.” He knew how to connect with an audience and would always end his “Hour of Decision” broadcasts with a folksy “God bless you real good.”

There had been other American evangelists with similar rhetorical skills before him, notably Billy Sunday, Dwight Moody, and Charles G. Finney. But it was Graham who harnessed the electronic mass media of the 20th century to take the message out of the revival tent and spread it around the world.

He also took advantage of jet travel, drawing huge crowds in 185 countries and territories. His evangelistic organization estimated that by 2007, in 60 years of preaching, he had preached before more than 215 million people and a broadcast audience of 2.2 billion.

The Gallup polling organization noted that Graham had appeared on its list of “most admired men and women” 61 times, far more than anybody else. It was no surprise that American presidents, beginning with Harry Truman, liked to associate with Graham and turned to him for spiritual advice. The evangelist would become a frequent visitor to the White House.

As a reporter who covered Graham from time to time, I noticed that he was scrupulous about avoiding political controversy. When we tried to ask him about some contentious issue of the day, he usually refused to get drawn in. He neither endorsed nor opposed political candidates, writing in his 1997 autobiography Just as I Am: “Becoming involved in strictly political issues or partisan politics dilutes the evangelist’s impact and compromises his message.”

But some compromising audio surfaced in 2002 when the National Archives released tapes secretly recorded by Richard Nixon 30 years earlier. On one of them, Graham and Nixon can be heard blaming liberal Jews for controlling the media and spreading pornography.

“They’re the ones putting out the pornographic stuff,” Graham told Nixon. And on Jewish media control, he said, “This stranglehold has got to be broken or the country’s going down the drain.” Later, Graham would issue a written apology for those words and meet with Jewish leaders to ask for forgiveness.

“My remarks did not reflect my love for the Jewish people,” Graham said. “I humbly ask the Jewish community to reflect on my actions on behalf of Jews over the years that contradict my words in the Oval Office that day.” Graham was big on telling people to atone for their sins and this time he practiced what he preached.

The Gallup polling organization noted that Graham had appeared on its list of “most admired men and women” 61 times, far more than anybody else.

I was present at the Richard Nixon Presidential Library and Museum in Yorba Linda, California on April 27, 1994 when Nixon was laid to rest and Graham told the mourners that, “A great man has fallen.” But Graham’s role in President Lyndon Johnson’s funeral 21 years earlier brings back my most vivid memory of “America’s pastor.”

LBJ died on January 22, 1973 at his ranch in Texas. After the state funeral in Washington D.C., his body was flown back to Texas for burial on the grounds of the LBJ ranch. Many years earlier, Johnson had asked Graham to preside over a graveside service for him at his family burial plot.

At the time, NBC News was opening a bureau in Texas and I was assigned there, quickly finding that the Lone Star State was fertile ground for great stories. But part of the Texas experience is the often wild weather.

The funeral began on a miserable morning with rain pelting down and heavy wind gusts blowing across the Texas Hill Country. The mourners attending the ceremony and those of us covering it braved the elements as we awaited the arrival of LBJ’s coffin. Suddenly, one of those wind gusts toppled the 30-foot scaffold bearing the microwave dishes that were going to relay the service to ABC, CBS, and NBC.

Much shouting ensued on the telephone lines connecting the LBJ ranch to New York. The coffin arrived, no video. The mourners sat, no video. The services began, no video. Just as the networks were giving up all hope of carrying the event live, Billy Graham got up to speak.

And as he did, the wind died down, the clouds parted, and the sun came out. Moments later, as Graham bowed his head in prayer and spoke the words, “Our heavenly Father, have mercy upon us,” the microwave signal was resurrected and Billy Graham was on live TV, coast to coast.

One of my colleagues leaned over to me and whispered in my ear, “Billy’s got some powerful connections.”

Amen to that one.