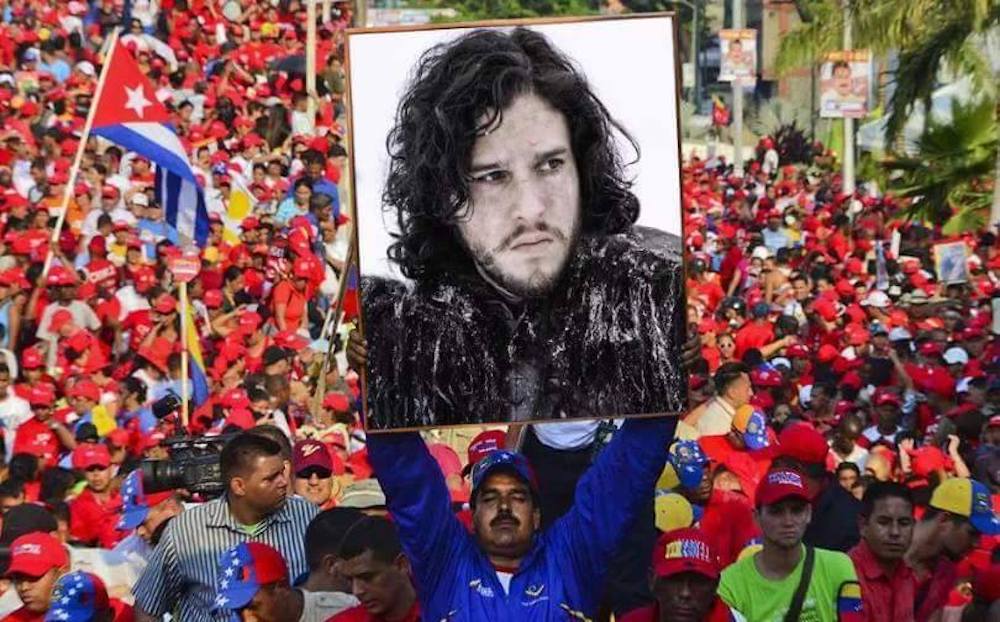 Browsing Facebook and Twitter, it's easy to find memes comparing the opacity and abuses of the Maduro government to the court intrigue in Game of Thrones. Image courtesy of José González Vargas.

Last March, I was teaching twice a week at the Universidad Bicentenaria de Aragua, 75 miles west of Caracas, Venezuela. While protests were breaking out in the streets around the country, I would go to the campus not knowing whether I would be teaching a group of five to 45 students or—as was the case for most of the term—I’d have to postpone class without knowing whether the country would fall into frenzied anarchy.

My subjects were “Introduction to Cinema” and “Basics of Scriptwriting.” They may seem shallow, a poor attempt to retain normalcy in a country falling apart, but I found the experience to be a distraction from my other job, which was reporting on current events in Venezuela. Talking with my students, I realized that I wasn’t alone in seeking to forget, if only for a while, our daily tragedy.

The first thing I asked my students was about what kind of movies they watched. Less than a decade separated us, and it was easy to see generational trends that were no different from those of our demographic counterparts in other countries. You had your fans of Marvel and Harry Potter, users of Reddit and Tumblr, viewers of 13 Reasons Why or Game of Thrones, and even readers of literature ranging from Jane Austen to 50 Shades of Grey.

At first, it’s all too easy to declare all of this pure escapism: a release from inflation, food shortages, and one of the highest crime rates in the world. And while normal life is a struggle, finding foreign movies and TV shows is relatively easy and nearly free, as long as your internet connection allows it. Piracy is commonplace in Latin America, but what makes Venezuela stand out is the gradual inaccessibility of legal media. Even before the country was caught in quadruple-digit inflation, getting new books or going to the cinema regularly was seen as something of a luxury. Most of my students read their books not from paperbacks or on Kindle, but on Wattpad or as PDFs in their phones or laptops.

Looking deeper, though, you can see there’s also another kind of release involved, the one you get when you can put into words and images what you don’t have any other way to express.

Browsing Facebook and Twitter, it’s easy to find memes comparing the opacity and abuses of the Maduro government to the court intrigue in Game of Thrones’ Westeros, or memes juxtaposing the violent survivalism of The Walking Dead with daily life here—food shortages, failing infrastructure, and a very limited supply of medicine.

Earlier this year, social media followed closely the death of renegade security official Óscar Pérez—including videos he uploaded himself on Instagram. It was a scene that wouldn’t have been out of place in The Hunger Games or V for Vendetta, both of which younger Venezuelans reference to their own situation—sometimes as a joke, other times more seriously.

It’s ironic, really, that we end up defining our struggles through foreign media. When Hugo Chávez became president in 1999, he was seen as a nationalist, a military commander, a common man. But above all, he was a llanero, a plainsman, a Venezuelan cowboy who would lead not only a social or economic revolution, but also a cultural one.

He was seen by many as a return to our roots, a U-turn to a “real Venezuela”—a country that, incidentally, had been defined by the rule of charismatic strongmen.

A couple of artists and intellectuals soon adapted to this new situation, some because of political affinity, others for funds. Román Chalbaud, arguably the Bolivarian Revolution’s most prominent artist, used to be a filmmaker well-known for his realistic—if lurid—social dramas. Today, he mostly directs historical epics where llaneros read Karl Marx in the 1850s.

For 15 years there was a boom in Venezuelan cinema, in no small part thanks to a heavy investment and promotion by the government. It managed to make terrific, thought-provoking, award-winning films, and every now and then it made the occasional piece of propaganda, mostly by the hand of Chalbaud and his kind.

Yet, my students still disparaged Venezuelan movies as “snoozefests about Simón Bolívar” or “filled with thugs and prostitutes.”

The success of Papita, Maní, Tostón a couple of years ago—a bland, cheap gag-filled romantic comedy set in the world of baseball fandom—makes the case that Venezuelans do see Venezuelan movies, but probably don’t enjoy those that think too deeply about the state of the country.

As Venezuelans scatter around the globe, a new question assumes relevancy: “What is Venezuela?” Is it a place? A memory? An ideal? Gone forever?

In any case, most Venezuelan movies are hard to find since there’s very little market for home media or streaming here. And, for this reason, bootlegs aren’t easy to get. To watch Venezuelan cinema, your best option is YouTube, where you can find La Balandra Isabel”—one of the two Venezuelan films to win at Cannes—and “Papita, Maní, Tostón. But once those pixilated videos are deleted due to copyright infringement, your chance to watch the movie is gone, probably for good.

In a top 10 list of highest-grossing Venezuelan movies you’ll find three comedies, two action movies, two period pieces, one horror film, and two LGBT dramas. With the exception of these last two, and the action movies, which invariably focus on crime and corruption but never explore the reasons behind them, none expresses any sort of insight about today’s Venezuela.

So it made sense that when I asked my students to develop a plotline for class, most of them set their story either in the United States or in Western Europe. These were places they didn’t know and filled with obvious flaws—they thought that Minnesota is a city; Manhattan is outside New York City; Rome is a country. The few set in Venezuela were revenge stories or overflowing with eye-rolling nationalism.

These kids, born around the time Hugo Chávez took power, couldn’t imagine stories of love, comedy, adventure, or people’s difficulties set in their own society. Despite the government’s communications machinery—made up of several television channels, dozens of radio stations, and a handful of newspapers—and Chavismo’s cultural revolution, newer generations don’t see any images of themselves beyond despair and disillusionment. But at the same time, the opposition never managed to conceive a credible alternative to this situation.

In many ways, Venezuela has been rediscovering itself. As the country deepens into a crisis never seen here within living memory, we question supposedly inalterable facts that once defined ourselves and our nation. For 40 years Venezuela was a bipartisan democracy, made prosperous by spectacular oil revenues. One of the goals of the architects of what was dubbed “Saudi Venezuela” was to modernize the country or, at very least, to appear modern. This meant building contemporary art museums, an international literary contest, and state-of-the-art performance centers: The face of democratic Venezuela was Niemeyer-inspired architecture and art installations by Carlos Cruz-Diez.

But for many people—especially those impoverished after the economic catastrophe of the 1980s—the leaders were disconnected, elitist, more attentive to Miami or Bern than to the rural states or the slums of Caracas. It’s no surprise that apátrida, literally meaning “stateless,” was one of Chávez’s most used insults for his enemies. In his eyes, those against him weren’t “real Venezuelans.”

In response, the artists and intellectuals were baffled at how a man who had staged a coup against a democratic government could be voted in as president. For them, a question emerged: “Where did we go wrong?”

For most of the Chávez years, when you walked into any bookstore it seemed that 90 percent of the books written and published in Venezuela tried to answer this question. From journalists to college professors to former ministers, every kind of armchair expert gave their own national diagnosis and prescribed some vague formula to steer the country back on course.

This is no longer the case, though. As Chavismo solidified to become the new establishment, those experts faded from the spotlight. Partly this is due to the government quietly taking over media but it also reflects a younger generation that is not interested in restoring a flawed country they never lived in.

Today, the bookstores that haven’t closed fill their spare bookshelves with remaindered books, some of which go as far as the ’70s. Did you know there were Happy Days novelizations in Spanish? Some have a few new-ish books that easily cost a month’s salary. But lately even the trade in used books—which used to be healthy because so many people were leaving the country and trying to make quick money—has fallen off as inflation has risen.

As Venezuelans scatter around the globe, a new question takes relevancy: “What is Venezuela?” Is it a place? A memory? An ideal? Gone forever?

This question dogs the visceral, heartfelt crónicas of Héctor Torres as well the reflective, melancholic songs of La Vida Bohème. To so many Venezuelans—including those who have left, never to look back, those who look back from all directions, and those of us still remaining in the country without knowing what the future will bring—this question hovers around, unable to be ignored.

At the moment, it doesn’t have an answer. But I can’t wait to see the books and movies that we will create to answer it.