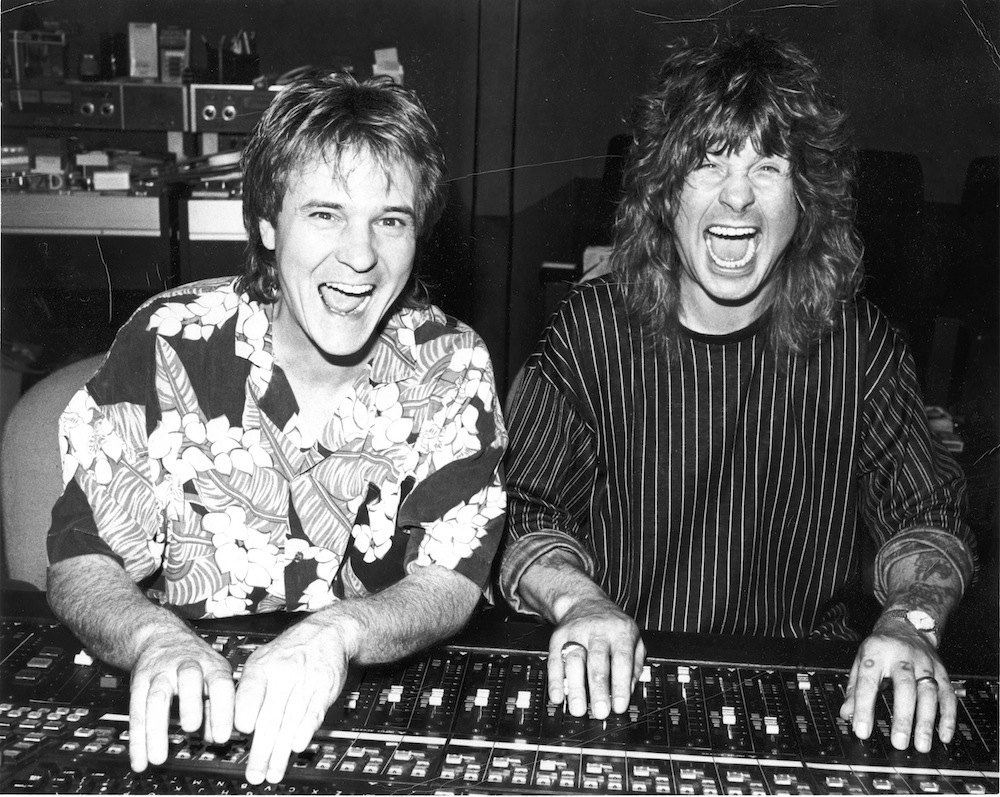 Grammy Award-winning producer Keith Olsen mugs for the camera behind the mixing console with client and pal Ozzy Osbourne in 1988 inside Olsen's Goodnight L.A. recording studio as the pair work on Osbourne's upcoming album, No Rest for the Wicked. Photo courtesy of Keith Olsen.

It was 1962, and the rock and roll record business was on the rise after the multiyear slump that had followed the debuts of artists like Elvis, Chuck Berry, and Little Richard. The industry’s savior, in large part, was a manic, diminutive, wig-wearing, Hollywood-based record producer (and future convicted murderer) named Phil Spector.

The mastermind behind such throbbing, multi-instrumental hits as “He’s a Rebel,” “Da Doo Ron Ron,” and “Be My Baby,” Spector was a gesticulating wunderkind on the other side of the control room glass. And the effects of his so-called “Wall of Sound” were immediate and profound; 14 Top 40 singles from 1962 through 1963 dwarfed that of Spector’s competition. Soon seemingly everyone wanted to work with the tiny titan, or copy him, or both. Rock and roll had found its bombastic rebirth—and L.A. had solidified its place at the center of the action.

The late ’50s and early ’60s represented a time and place like no other in American history, particularly in sun-drenched Southern California. Convertibles, palm trees, bikinis, surfboards, and ever-present transistor radios advertised a post-war optimism that reigned supreme among teens and twentysomethings. And the record business’s rebound into a new kind of hot-sounding (and selling) style of rock and roll, exemplified in the simultaneous rise of many of Los Angeles’ vaunted recording studios, was a critical part of the story.

Starting during Spector’s heyday, one iconic studio after another came to prominence in the city: Gold Star, at the corner of Santa Monica and Vine; Crystal Sound, just two blocks south; TTG, about a mile away from them both, near Hollywood High; and a few dozen more. The windowless, nondescript buildings, jammed with expensive recording gear, would become the epicenter of America’s musical universe, humming with activity 24/7, for the better part of almost four decades. They generated an unprecedented string of million-seller singles and albums, and attracted all the hottest musicians: Neil Young. Steppenwolf. Joni Mitchell. Three Dog Night. Paul Revere and the Raiders. Van Halen. Tina Turner. Fleetwood Mac. Sam Cooke. The Doors. Cheap Trick. REO Speedwagon. Madonna. Earth, Wind and Fire. Steely Dan. The Eagles. Guns N’ Roses. Sly and the Family Stone. Even Led Zeppelin and the Rolling Stones made frequent pilgrimages.

Producers like Spector fueled the studios’ rise. Picking the right studio for the right project was a crucial task, and—at least at first—was a producer’s domain. Many record labels, including A&M, Motown, Liberty, Paramount, MGM, Warner Bros., and CBS maintained their own L.A. recording studios, which their artists were expected to use. But stature had its privileges, and successful producers found ways to get back to their favorite haunts.

Spector, who mostly worked with artists on his own Philles Records label (until 1966 when he faded from the business after the stinging, much-publicized failure of “River Deep, Mountain High,” sung by a young Tina Turner), liked recording at Gold Star. Brian Wilson, the Beach Boys’ production mastermind, loved the cozy confines of Studio 3 at Western Recorders—even though the Beach Boys’ label, Capitol Records, had a world-class, in-house studio nearby that the band could have used for free.

Sometimes a producer’s preference came down to superstition, not wanting to mess with a good thing. If a producer had recorded a big hit or two at a certain studio, then the odds were good that he (in those days, producers were virtually all male) would be back for more. Paul Rothchild, the Doors’ producer, only wanted to record at Sunset Sound after the surprise chart-topping success of the band’s second single, “Light My Fire,” in 1967. Peter Asher stuck with the Sound Factory after he scored a No. 1 hit there with Linda Ronstadt’s “You’re No Good” in 1974.

By the ’70s and into the ’80s, when album rock became the dominant force in popular music, the power balance in picking where to record began to tilt even further from label executives—this time, in favor of musicians, who also had pet studios. Jackson Browne initially favored the Sound Factory, then later Record One, on the other side of the Hollywood Hills in Sherman Oaks. Though the ’80s version of the light-rock hit-makers Chicago were signed to Full Moon Records, distributed (and eventually owned) by Warner Bros., the band recorded at West Hollywood’s Record Plant, in part because of its “artist-friendly” policies concerning in-studio partying. 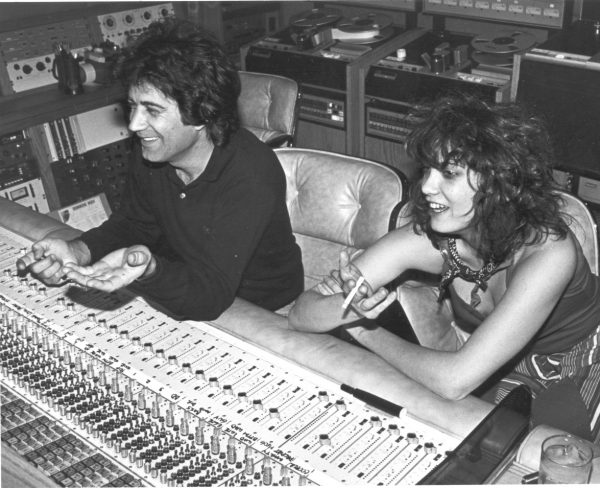 Multi-platinum producer Val Garay shares a laugh with Martha Davis of The Motels in the early ’80s during a recording session inside Garay’s recording studio, Record One, in Sherman Oaks. With Garay at the helm, the Motels made the Top Ten twice with “Only the Lonely” and “Suddenly Last Summer.” Photo courtesy of Val Garay.

Costs of making an album in Los Angeles could get hefty, but it really made little economic sense to set up shop anywhere else. It was still cheaper to record in a city where everybody knew everybody, nobody needed a plane ticket or a hotel room, and there were plenty of well-known local session musicians at the ready. Great recording gear also set the Los Angeles studios apart. The incessant push for better sound led, by the early ’60s, to the creation of some of the most revered equipment in the business.

David Gold, the co-owner and co-founder (with Stan Ross) of Gold Star, hand-built that popular studio’s coveted microphone preamps and world-famous echo chamber. Nearby, at Western Recorders, owner and technical wizard Bill Putnam built most of his own equipment, too—from mixing consoles to EQ units to limiters and compressors—and started a separate business to sell his gear to other studios around the world.

Also distinguishing L.A. studios was the “hang,” a shorthand word among musicians for the vibe, accommodations, and/or people in any given recording studio. Smart owners knew how to cater to the specific, if sometimes decadent, demands of their clientele. Niceties varied from studio to studio: sumptuous lounge areas, gourmet kitchens with chefs, private bedrooms, hot tubs, waterbeds, 24-hour personal assistants known as runners. Sunset Sound, the Village Recorder, and Cherokee were all known for the quality of their hang.

Coffee, tobacco, liquor, and depending on the artist, marijuana all were standard issue during recording sessions; sometimes harder drugs were, too (particularly cocaine, which some saw as a good tool to help stay awake). Liquor bottles might be everywhere. Ashtrays routinely overflowed with butts. About the only real no-no was spilling anything on the mixing console. That could actually get a person in trouble.

By the mid-’80s, the record industry was modernizing. Vinyl albums started falling out of favor, supplanted first by analog cassette tapes and then by digital CDs. At the same time, studios began moving away from analog recording equipment, which required engineers to use a razor blade to slice out a section of magnetic recording tape when they wanted to alter a portion of a song. Suddenly, a few clicks of a computer mouse could achieve the same result.

Despite the obvious benefits of digital technology, some classic L.A. studios, such as Sound City in the San Fernando Valley, didn’t want to make a hefty investment in new equipment and decided instead to ride out what they hoped would be a passing fad. It was a losing gamble; the demand to record on digital equipment only increased. Sound City managed to remain open for a time, bolstered by the success of Nirvana’s Nevermind in 1991. But the studio never regained its previous level of popularity and ultimately closed for good in 2011. (Note: an effort to revive Sound City, by the daughter of its late owner, occurred in 2017.)

The introduction of ProTools recording software in the ’90s further sped the old studios’ decline by lowering barriers to entry. Today, spare bedrooms and garages are routinely used to cut “professionally” recorded songs.

A full-throttle phase of record industry mergers and acquisitions during the 1980s, involving some very big companies, had an impact, too. The bottom line became far more important. Gone were the warm-and-fuzzy late ’60s and early ’70s, when labels—largely run by hustlers, dreamers, and music lovers—frequently covered the cost for fledgling acts to cut two or three albums before seeing a hit record out of the deal, if ever.

Inadvertently ushering in the new era of fiscal responsibility, in 1979 Fleetwood Mac—with the colossal success of 1977’s Rumours still reverberating—got their label, Warner Bros., to provide a custom, million-dollar rebuild of the Village Recorder’s Studio D in Westwood to record a follow-up album. When Tusk didn’t sell as well, Warner Bros. began taking a much harder look at album-related expenditures, no matter how big the musical act. As did most of the other labels in town. 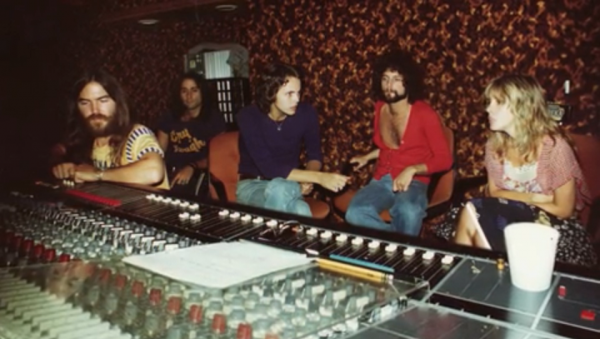 Singer/songwriter/guitarist Walter Egan (middle) joins Fleetwood Mac members Lindsey Buckingham (second from right) and Stevie Nicks (far right) in the studio at Sound City in the Van Nuys area of Los Angeles in late 1977. Both Nicks and Buckingham were on hand to help Egan cut his second LP, Not Shy, upon which they added backing vocals to his breakthrough hit single, 1978’s “Magnet and Steel.” Photo courtesy of Walter Egan.

Today, some landmark recording studio buildings in Los Angeles remain standing—a few with functioning studios still inside—but gentrification has rendered many nearly unrecognizable. At the corner of Sunset and Gower, in the heart of old Hollywood, sit the remains of the celebrated CBS Columbia Square facility, birthplace of hit singles such as Simon and Garfunkel’s “Bridge Over Troubled Water.” Now a mixed-use complex called Columbia Square, the site features an upscale sushi bar, a high-end jewelry store, and about 200 high-rise condos.

Radio Recorders on Santa Monica Boulevard, where Elvis cut many of his hits, is now an art exhibition space. Gold Star mysteriously burned to the ground in 1984, and is now a strip mall. Even A&M Records’ venerated in-house studios on La Brea Avenue in West Hollywood—the birthplace of Carole King’s Tapestry, Bruce Springsteen’s Tunnel of Love, Aerosmith’s Get a Grip, and “We Are the World,” the 1985 anthem that helped raise money for African famine relief—has morphed, becoming the headquarters of the Jim Henson Company, home of the Muppets.

Most of L.A.’s irreplaceable temples of sound have gone silent, leaving only a handful of still-intact studios— Capitol Records’ in-house facilities, Sunset Sound, the Village Recorder (now the Village Studios), the Record Plant, the Sound Factory and a few more. The glory days in the ’70s or ’80s of seeing Linda Ronstadt, Mick Jagger, and Tom Petty and the Heartbreakers laying down tracks at the same time, in the same building, are long gone.

Yet there may be hope. RCA’s historic Studio A in Nashville recently escaped the wrecking ball with the help of some well-heeled philanthropists. So did the revered Power Station in New York. A visionary local businessman saved Sun Studio in Memphis, where some very cool cats called Elvis, Johnny, Jerry Lee, and Carl all got their start. Perhaps the same kind of preservationist efforts could emerge in the City of Angels, to save the literal building blocks of its rich musical heritage.