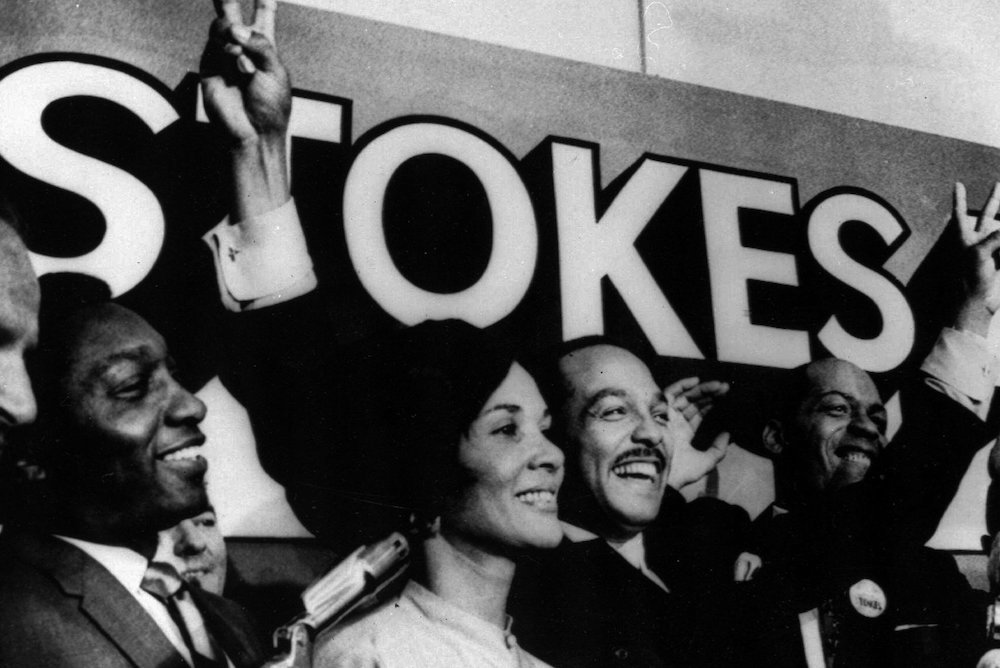 Cleveland Mayor Carl B. Stokes, flanked by his wife Shirley, gives the victory sign on Sept. 30, 1969, in Cleveland after winning Cleveland's Democratic mayoral primary as he sought his second term. Photo courtesy of Associated Press.

On June 24, 1969, the mayor of Cleveland, Ohio, Carl Stokes, held a press conference on a railroad trestle, one of two bridges damaged when an oil slick caught fire on the Cuyahoga River two days earlier. The coverage in local newspapers was minimal. The fire went out soon after it started. No one bothered to snap a picture. In fact, a Cleveland Press photo of the mayor standing on the tracks with reporters is as close as we can get to the blaze. It was almost a nonissue.

Almost. Two months later Time magazine published an article about the nation’s industrial pollution and its impact on waterways. It included a photo with a huge smoke cloud billowing from a ribbon of fire on the water. The picture was from another Cuyahoga River fire, 17 years earlier. In fact, the river had ignited many times over the years. Regardless, the story ensured that the 1969 fire, a blaze that few saw, would be seared into the memory and lore of this Great Lakes city, and would become a persistent theme in the city’s narrative. Even today, national media dutifully reference the burning river whenever Cleveland is the subject.

The fire serves as a convenient shorthand, but like its smoke, it obscures more than it reveals about Cleveland, its symbolic place in “Rust Belt” history, and a pioneering African-American mayor—the first elected to lead a major U.S. city—who understood his opportunity to do more than be a handmaiden for a city in decline.

As Mayor Stokes stood above the river on that summer day he carried a heavy burden that extended well beyond a flammable river. Even before 1969, Clevelanders were painfully aware that their city’s waterways were severely compromised. Those who were paying attention also knew that Cleveland was in the throes of what scholars have called “the urban crisis”—a mix of racial discrimination in housing and jobs, neighborhood decay, capital flight, and deindustrialization—long before the river burned. The previous summer, a protracted gun battle between police and black nationalists on the city’s East Side had shattered hopes for rolling back the urban crisis. The so-called Glenville Shootout, which unfolded just a mile from the epicenter of the destructive Hough rebellion of 1966, and practically within earshot of the venerable stone edifices of the acclaimed Cleveland Museum of Art and Severance Hall (home of the Cleveland Orchestra), cast a much darker cloud over the mayor’s office than anything the murky Cuyahoga River could churn up. In his memoir years later, Stokes recalled that Glenville spelled “the end of Carl Stokes as hero.”

Why was Stokes a hero in the first place? It had been no small feat becoming the first elected black mayor of a major U.S. city—and it was a particularly unlikely achievement for Stokes, considered in light of his early life. As detailed by Stokes biographer Leonard N. Moore, the mayor’s mother, born Louise Stone to a sharecropper-turned-preacher and a plantation cook in Wrens, Georgia in 1895, had fled the South in the Great Migration and found work cleaning in Cleveland’s staid Union Club. In Cleveland she met and married Charles Stokes, a laundryman from Cordele, Georgia.

In 1929, Charles Stokes died, leaving his young widow to raise two-year-old Carl and a four-year-old brother in a cold, drafty rental house in Cedar-Central, Cleveland’s version of the Chicago Black Belt or New York’s Harlem. Stokes later wrote that, as a child, he admired his uncle, who ran an after-hours joint next door: “He was a very rough man and I was proud of him. In a community where people live in despair and denial, the man who defies the rules and is able to make a living becomes a hero.” After 10 years, the Stokes family managed to secure a unit in the brand-new Outhwaite Homes, one of the nation’s first public housing projects. Freed for a time from the harshest of existences, the young Stokes flourished, developing a reputation as an exemplary student and a championship ping pong player, but he lost focus in his teenage years as gambling, playing pool, and fighting competed with his studies. Stokes dropped out of high school, worked in local factories, and served a stint in the U.S. Army before finally finishing his diploma. He enrolled in college on the G.I. Bill, went on to earn a law degree, and eventually won election to three terms in the Ohio House of Representatives in the 1960s.

Following an unsuccessful mayoral run in 1965, Carl Stokes, the great-grandson of slaves, narrowly edged out his Republican opponent Seth Taft, the grandson of U.S. President William Howard Taft. In doing so, Stokes shared one thing with his uncle in 1930s Cleveland—he was a man who defied the rules of the political game. Stokes’ victory owed to his charisma; his ability to convince one-fifth of white voters, including influential business elites, that he might bring stability to a city recently wracked by racial unrest and violence; and his work to mobilize a grassroots political movement that delivered nine-tenths of the city’s black vote. This combination of a nimble ground campaign and a willingness to forge strong ties to the business community offered, if not a blueprint, a guide for a generation of black politicians who sought the mayoralty of other cities in the 1970s and 1980s—among them Tom Bradley in Los Angeles, Coleman Young in Detroit, and Harold Washington in Chicago.

Stokes was a “messiah mayor” before the term was coined. From the moment he threw his hat in the ring in the mayoral race of 1967, he made clear that he could read the pulse of Clevelanders. With his campaign slogan, “I believe in Cleveland,” he prescribed a new mentality in a city that was deeply mired in urban crisis. He became an embodiment of civic hope. One of the mayor’s aides noted of his travels around the country, “People were saying nice things about Cleveland again.” At least for a few months of Stokes’ time in office, the national media narrative highlighted an urban renaissance led by an unlikely black celebrity. 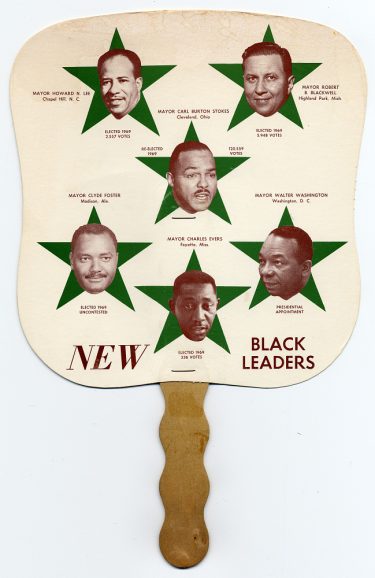 A hand fan depicts Cleveland’s Carl Stokes and other mayors who represented a generation of “New Black Leaders” in the late 1960s and early ’70s. Image courtesy of The National Museum of American History.

After Martin Luther King, Jr. was assassinated on April 4, 1968, Stokes, hoping to head off the reactive violence that had hit other cities, launched a massive campaign called Cleveland: NOW!. It was a $1.5 billion blueprint for change that would, if fully implemented, speak to dire needs in employment, housing, and health and human services. It promised to address many of the reasons that the Civil Rights movement had struggled to gain traction in northern cities with direct-action tactics designed to counter Jim Crow in the South.

But Stokes was both a realist and a showman, and he understood that he needed to generate a sense of progress and excitement on the ground to buy time for the hard work ahead. Dispensing hope became more critical after the Glenville Shootout destroyed the myth that a black mayor was an insurance policy against racial unrest. Stokes and his brain trust of youthful, energetic cabinet members undertook symbolic initiatives to mold perceptions of Cleveland, especially as some of the city’s most cherished places closed over the next year—the ornate theaters of Playhouse Square, the Euclid Beach amusement park, and Sterling-Lindner, a department store known for its towering Christmas tree.

With the city’s Lake Erie beaches too polluted for swimmers and environmental remediation still on the horizon, City Hall installed chlorinated “swimming pools in the lake” at two popular beachfront parks. Surrounded by gleeful children, Mayor Stokes rolled up his pants and waded into one of these enclosures at its dedication in the summer of 1968, a year before the river fire. With affordable housing in short supply following years of slum-clearance campaigns, the administration worked out a deal whereby dozens of houses that stood in the way of building a new municipal service center in Shaker Heights were moved from the model suburb into Cleveland neighborhoods in 1969. Stokes personally presented the keys to the first home, a Dutch colonial moved to East 114th Street, to Helen Willis and her three children, beneficiaries of a new federal mortgage assistance bill designed to mitigate displacement by urban renewal programs.

Taking cues from the “Fun City” programming launched by Mayor John Lindsay in New York City, Stokes also worked to re-enliven downtown. His administration sponsored an outdoor café, music and arts festivals, and lighting and signage to support the fledgling Flats entertainment district along the Cuyahoga. It also partnered with business leaders and the city’s General Electric (GE) Lighting Division to install streetlights touted as the brightest in the nation on the downtown stretch of Euclid Avenue. Stokes flipped the ceremonial switch at a festive event in a Playhouse Square district only recently darkened by shuttered theaters. All were calculated as highly visible and easily attainable facets of the Cleveland: NOW! campaign.

With his campaign slogan, “I believe in Cleveland,” [Stokes] prescribed a new mentality in a city that was deeply mired in urban crisis. He became an embodiment of civic hope.

Stokes won re-election in 1969, but political adversaries in the city council worked tirelessly to undermine the mayor’s vision for a more equitable city. Political constraints, not to mention a city budget gutted by mounting debt, significantly limited what Stokes could accomplish, leading him to bow out of the 1971 mayoral race. It would be a mistake to conclude that Stokes accomplished little, for he did more to address the plight of the city’s poor than any of his predecessors. Nevertheless, he was powerless to stop the broader social and economic forces that were siphoning away jobs from the Great Lakes region and emptying older cities like Cleveland.

The four-year tenure of Carl Stokes was one of several periods of intentional civic renaissance in Cleveland. It has again become fashionable to tell stories about the revival of Rust Belt cities. We latch on to narratives in which a hero—such as Dan Gilbert in Detroit, or LeBron James in Cleveland—comes to the rescue of a once-great city. If heroes don’t necessarily produce lasting transformations, they do help people cope with unsettling metropolitan change. Throughout the long downward tilt of older American cities, people with big dreams propelled wishful counter-narratives. 50 years ago, the nation’s first big-city black mayor had the audacity to hope that 1969 might be the year that future Americans would remember as the moment when Cleveland began to throw off the shackles of a longstanding urban crisis—rather than one when a burning river sounded the alarm that an American city was on its deathbed.