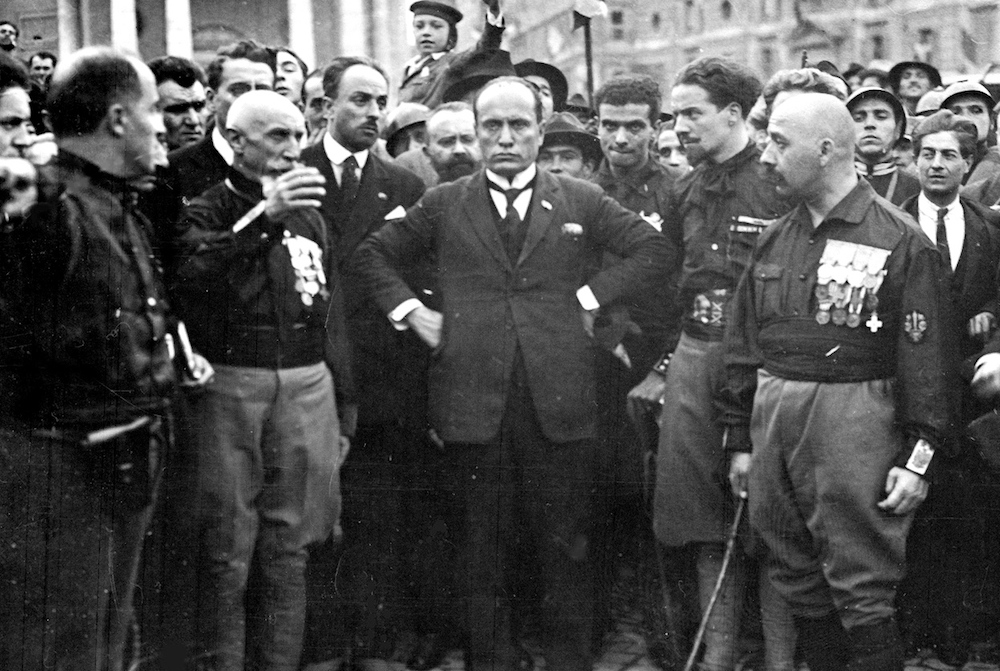 Benito Mussolini and friends during the march on Rome, 1922. Photo courtesy of Wikimedia Commons.

Authoritarianism isn’t just a word. When the landmark study The Authoritarian Personality first gave the concept psychological depth in 1950, the memory of authoritarian movements was fresh and indelible. The intent of the new definition was to capture the many-sided extremism of those movements. “Authoritarian aggression” was defined as the tendency to “condemn, reject, and punish” cultural or moral outsiders, while authoritarian submission was a “submissive” and “uncritical” attitude toward idealized leaders of their own in-group.

In other words, for the originators of the concept, in-group leaders who condemn and punish out-groups are the authoritarian’s highest ideal. Since 1950, however, social scientists have tended to doubt that aggressiveness really matters. Under the influence of that doubt, the nation’s principal attitude surveys—the General Social Survey and the American National Election Studies—have traditionally sought evidence of authoritarian submissiveness, but not aggressiveness.

In 2016, at our request, the American National Election Studies (ANES) included two statements expressing aggressively authoritarian attitudes that respondents were asked to either agree or disagree with. These strongly worded statements, which were pioneered a generation ago by psychologist Bob Altemeyer of the University of Manitoba, evoked equally strong responses.

The first statement was unambiguous: “Our country will be great if we honor the ways of our forefathers, do what the authorities tell us to do, and get rid of the ‘rotten apples’ who are ruining everything.” The second test statement was similar: “What our country really needs is a strong, determined leader who will crush evil and take us back to our true path.”

Our analysis of the ANES data shows that voters who pulled the lever for Donald Trump in 2016 loved these statements. Only a few other ANES items divided Trump voters from Clinton voters as significantly and reliably—mainly, statements expressing resentment towards women, minorities, immigrants, and Muslims. And population variables (age, gender, education, marital status, and income) proved comparatively insignificant. Voters who wanted domineering leaders to crush evil and get rid of rotten apples supported Trump at every age and stage, at every level of education and income. These voters wanted to win the culture wars, and their “submissiveness,” we think, is better understood as fealty to a culture warlord.

Altemeyer foresaw this possibility. In 1994, he worried aloud that if the public was as avid about “crushing evil” as his students were, “tens of millions of North Americans” would want to give aggressive leaders free rein to crush evil, without worrying too much about minority rights. Now, nearly 25 years later, this fear seems amply justified. Yet many social scientists remain skeptical about the political relevance of aggressiveness.

By now this skepticism is very familiar. In 1958, so many psychologists were redefining authoritarianism as “acquiescence” that Richard Christie, who just two years earlier had co-authored a guide to the literature on authoritarianism, felt the need to object: “… most of us who have ventured outside the ivied halls,” Christie insisted, with his co-authors Joan Havel and Bernard Seidenberg, “have known individuals who emphatically” volunteer the very same ideas that appear in statements tapping authoritarian aggression. And rather than being placidly “acquiescent,” Christie adds, they angrily reject liberal pieties and denounce “anyone making such statements [as] a fool if not a traitor.”

In 2016, 17 candidates sought the Republican presidential nomination. The one who triumphed was the one who sounded most like Christie’s angry interlocutors and Altemeyer’s belligerent students—the candidate, that is, who most fervently promised to eliminate evil and evil-doers. In November 2016, 63 million people voted for that candidate.

If we hope to resist authoritarianism, we must understand it. And that remains a challenge. Even now, many people believe that aggressiveness is just a sign of ignorance or fear, which can be allayed by reasoned argument. They think that many Trump voters winced when they went to the polls—that they voted for a domineering leader not to crush out-groups, but simply to shake things up, hoping for the best.

Our data suggest otherwise. Although 26.9 percent of Trump voters did not call themselves his “strong” supporters, they closely resembled his strong partisans in nearly every attitude. Both groups voiced resentment toward what they see as overbearing women, undeserving minorities, and intrusive immigrants. And they also vented bitterness about what they saw as the excessive inclusiveness of authority figures like Obama who tolerated (or, they thought, favored) the very evils they wanted to see crushed.

Not every Trump voter held these opinions. But most did. And that suggests the need for deeper insight.

Before 2012, the ANES had studied authoritarianism in the full sense, with a focus on both aggression and submission, only twice—in 1952 and 1956. In the ensuing six decades, while many smaller surveys have yielded valuable insights, reliable and representative findings about authoritarianism in the wider public have been scarce. So the lessons we can draw from our 2016 items finally take us a step in the right direction, and offer a starting point for further inquiry.

In 2016, 17 candidates sought the Republican presidential nomination. The one who triumphed was the one who most fervently promised to eliminate evil and evil-doers.

20 years have passed, for example, since we learned that authoritarianism comes in several flavors, including two relatively rare but extreme forms. People with “Wild Card” tendencies are so antagonistic to tolerant authorities that they sound like anarchist rebels—except that they rebel in favor of harsher authority. And we learned from political psychologists Felicia Pratto and Jim Sidanius that some people with prejudiced and authoritarian attitudes regard themselves, not as defenders of conventional morality, but as cynical, self-aggrandizing winners in a world of also-rans.

The latter finding has often been replicated, not least in 2012, when the ANES, at our urging, included four statements testing the sentiments that Pratto-Sidanius discovered. But those statements were omitted from the 2016 survey, and Wild Card attitudes have not yet been tested in any major survey. So many questions remain unanswered, despite recent progress.

Richard Christie intuited long ago that the intolerant are often belligerent as well—and belligerence, as recent research has shown, spurs actions that differ fundamentally from actions driven by fear. We misunderstand that at our peril.