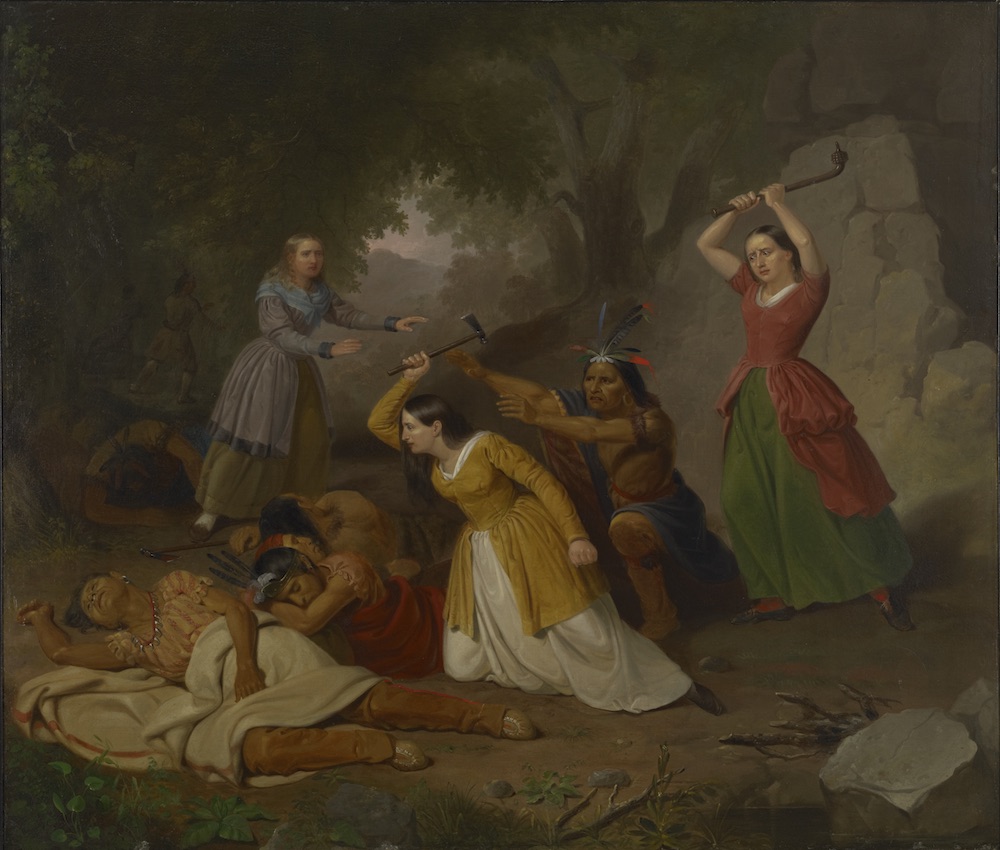 On a small island north of Concord, New Hampshire, stands a 25-foot-tall granite statue of Hannah Duston, an English colonist taken captive by Native Americans in 1697, during King William’s War. Erected in 1874, the statue bears close resemblance to contemporary depictions of Columbia, the popular “goddess of liberty” and female allegorical symbol of the nation, except for what she holds in her hands: in one, a tomahawk; in the other, a fistful of human scalps.

Though she’s all but forgotten today, Hannah Duston was probably the first American woman to be memorialized in a public monument, and this statue is one of three built in her honor between 1861 and 1879. The mystery of why Americans came to see patriotic “heroism” in Duston’s extreme—even gruesome—violence, and why she became popular more than 100 years after her death, helps explain how the United States sees itself in world conflicts today.

Born in 1657, Hannah Emerson Duston lived in Haverhill, Massachusetts, at a time when disputes among English colonists, the French in Canada, and various Native American nations resulted in a series of wars in the region. King Philip’s War (1675-1676), for example, decimated southern New England Indian nations, which lost between 60 and 80 percent of their population as well as their political independence. Many were sold into slavery. By the late 1680s and the start of King William’s War, fragments of those southern tribes had joined the Abenaki and other northern New England Indian nations allied with the French to fight the continuing expansion of the English colonists to the north and west. Native men conducted raids on frontier English settlements, burning property, killing or injuring some colonists, and taking others captive, either to ransom them back to their families, or to adopt them as replacements for their own lost family members.

Such was the context in which one group, most of whom were likely Abenaki, attacked the town of Haverhill on March 15, 1697—and encountered 40-year-old Hannah Duston at home with her neighbor Mary Neff. The Indians captured the women, along with some of their neighbors, and started on foot toward Canada. Duston had given birth about a week before. The captors are said to have killed her child early in the journey.

The group traveled for about two weeks, and then left Duston and Neff with a Native American family—two men, three women, and seven children—and another English captive, a boy who had been abducted a year and a half earlier from Worcester, Massachusetts. 14-year-old Samuel Leonardson may have been adopted by the family; he certainly had their trust. At Duston’s request, he asked one of the men the proper way to kill someone with a tomahawk, and was promptly shown how.

One night when the Indian family was sleeping, Duston, Neff, and Leonardson—who were not guarded or locked up—armed themselves with tomahawks and killed and scalped 10 of the Indians, including six children. They wounded an older woman, who escaped. A small boy managed to run away. Duston and her fellow captives then left in a canoe, taking themselves and the scalps down the Merrimack River to Massachusetts, where they presented them to the General Assembly of Massachusetts and received a reward of 50 pounds. 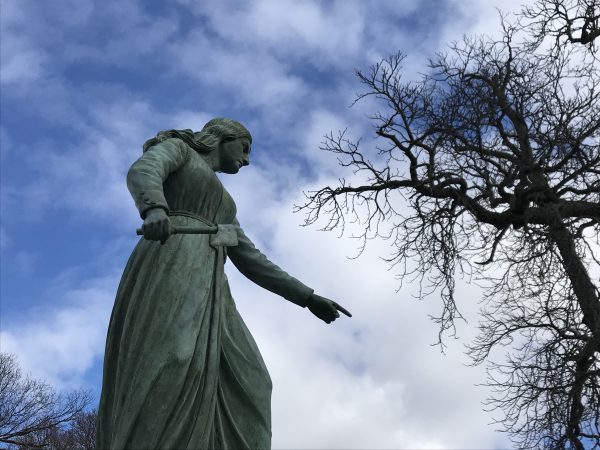 This statue of Hannah Duston was the second one erected in Haverhill, Massachusetts. In other statues she holds scalps, but here she points her finger accusingly. Photo courtesy of Gregory Rodriguez.

Hannah Duston never wrote down her story. Most of what we know about her comes from the influential Puritan minister Cotton Mather, who published three versions of her tale between 1697 and 1702, embedded in his larger works on New England history. Mather frequently portrayed Indian people as instruments used by the devil to thwart the Puritan mission. He described Duston as a righteous ringleader who had every reason to convince the other captives to act. He stressed the “savagery” of her Indian captors, providing a horrific description of the murder of her child (“they dash’d out the Brains of the Infant, against a Tree.”). We will never know the full truth of Duston’s ordeal—was her baby murdered or did it die?—but Mather’s version of the death highlighted Indian violence to justify Duston’s gruesome vengeance.

Mather asserted that Duston and Neff never meant to kill the small boy who escaped; he was “designedly spared” so they could bring him home with them, if he hadn’t run away. At the same time, Mather was apparently unconcerned that six of the “wretches” the captives scalped were children. He compared Duston to the biblical heroine Jael, who saved her people by driving a spike through Sisera’s head while he slept. Cotton Mather understood the wars between New England Puritans and Indians as battles between good and evil and this clearly shaped the way he told Duston’s story. She was a heroine saving her people from “savage” outsiders, fighting a justified war.

After 1702, Americans forgot about Hannah Duston until the 1820s, when there was a half-century-long revival of interest in her story, stoked by the nation’s expansion westward into Indian lands. The nation’s foremost literary figures, including Nathaniel Hawthorne, Henry David Thoreau, and John Greenleaf Whittier, all wrote about her. Virtually all histories of the United States from that time contained a version of the story, as did numerous magazines, children’s books, biographies of famous Americans, and guidebooks. A mountain in northern New Hampshire was named “Mt. Dustan” in her honor—and of course, communities erected the three monuments.

It is no coincidence that Americans renewed their interest in the Duston story during this time. From the 1820s, when Georgia began pressing for the forced removal of native people, through the Battle of Wounded Knee in 1890, the so-called “Indian problem” was almost always in the news. 19th-century white Americans were well aware of the moral issues that Indian removal raised, and engaged in heated national debates. As an 1829 “Circular: Addressed to Benevolent Ladies of the United States” put it, “The present crisis in the affairs of Indian Nations in the United States, demands the immediate and interested attention of all who make any claims to benevolence or humanity.” The circular described Indians as “free and noble” yet “helpless,” and “prey of the avaricious and the unprincipled” who wanted to steal their land, not caring that Indians would “perish” if removed.

Women, excluded from formal politics at this time, were active in the anti-removal campaign. They justified their involvement in a political issue by framing Indian removal as a moral question. In the 1820s, virtue was central to American national identity, and embodied in women. This is why Columbia became such a popular symbol of the nation—and why some turned to the story of Hannah Duston as ammunition in the debate over Indian removal.

How could a virtuous democratic nation evict Native Americans from their homelands, and wage war against them when they refused to give up those lands? It was possible only if those Indians were “bloodthirsty savages” who attacked innocent white Americans. Because female virtue was linked to the nation’s virtue, what violent act could be more innocent than that of a grief-stricken mother who had just witnessed the murder of her newborn child?

The idea of a feminized, always-innocent America has become the principle by which the United States has structured many interactions with enemy others.

Accordingly, like Cotton Mather’s accounts, 19th-century versions of the Duston story depicted Native Americans as excessively violent. In a popular 1823 history textbook by Charles Goodrich, the Indians who took Duston captive burned “with savage animosity” and “delighted” “in the infliction of torment.” Goodrich claimed that “[w]omen, soon expecting to become mothers, were generally ripped up” by Indian captors and that some captives were even “roasted alive.”

But one problem remained: How could an “innocent” wronged mother murder someone else’s children herself? Tellingly, the fact that the “innocent” Duston killed six children was increasingly erased from accounts of her actions from the 1830s on. She thus became an American heroine.

Efforts to commemorate Duston began in earnest with the acceleration of western expansion in the 1850s. The first monument, built in Haverhill in 1861, was a marble column. On its base was a shield, surrounded by a musket, bow, arrows, tomahawk, and scalping knife. Engravings on its sides told the story of the “barbarous” murder of Duston’s baby and her “remarkable exploit;” the column was topped by an eagle, symbol of the American nation. The monument’s builders, however, never fully paid for it, and in August 1865 it was stripped and resold to another town as a Civil War memorial.

The second monument was the 1874 New Hampshire scalp-wielding statue. Located on the island where it was thought Duston had killed the Native American family, it was unveiled on June 17th, the anniversary of the Battle of Bunker Hill, making the link between Duston, her violent acts, and American patriotism explicit. Haverhill built the last monument in 1879, as a replacement for the repossessed column. This time around, Duston, in long flowing hair and a gown, held a tomahawk in one hand and pointed the other outward in accusation, both highlighting her violence and suggesting that responsibility for it lay elsewhere. The scalps were gone. At its installation, the philanthropist who donated money for the statue emphasized its patriotism, stating that the purpose of the monument was to remember Duston’s “valor” and to “animate our hearts with noble ideas and patriotic feelings.”

As long as the so-called “Indian problem” continued, Duston remained an important historical figure, her story presented as moral justification for American expansionism onto Indian lands and into Mexico. But by 1890 officials had pronounced the “frontier” closed. The Indian population had reached a historic low, and the U.S. government confined virtually all Natives who remained in the West to reservations; the “Indian problem” was over. The nation reassessed its attitudes toward Native Americans, and public interest in Duston’s story plummeted correspondingly. The tale disappeared from textbooks and popular culture.

Still, the powerful dynamic the story helped to establish remains with us today. The idea of a feminized, always-innocent America has become the principle by which the United States has structured many interactions with enemy others. In international wars as on frontiers past, it has portrayed itself as the righteous, innocent, mother-goddess-of-liberty patriotically defending herself against its “savage” enemies.