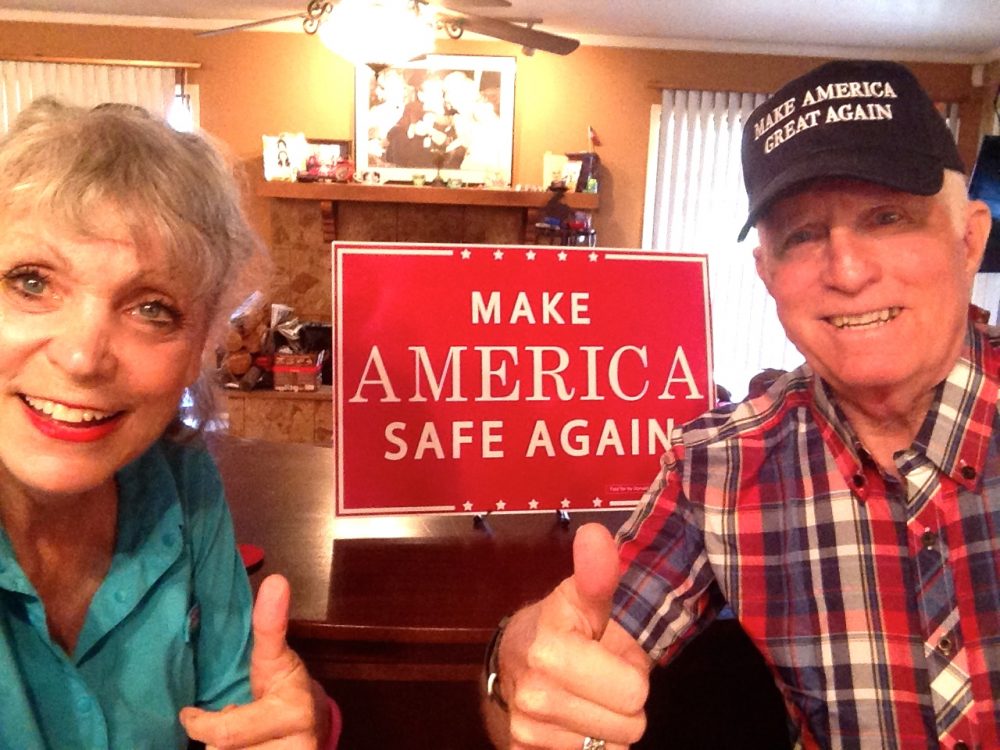 Fred Shinn and Terrie Frankel, give two thumbs up for Trump. Photo courtesy of Wikimedia Commons.

Just a few decades into the latest wave of globalization, the “nation-state” is striking back with a vengeance. From the United States and the Russian Federation, to Hungary, the Philippines, Poland, Turkey, the U.K., and elsewhere, an emerging class of politicians is setting out to make their countries “great” again. Their resentment of multilateral, globalist institutions is loud, and they make no accommodation for others whose patriotism is seen to be deficient.

Nation-centric programs have gained considerable support recently, particularly from older people. In the United States, in election after election, the Republican Party has enjoyed higher support from older voters (ages 65 and above). About 53 percent of this group voted for Republicans in 2016, but only 37 percent of young adults (ages 18 to 29) joined them.

The young and the old are not only spread differently across the political spectrum, but in certain cases, they also seem to be moving away from each other. In the United Kingdom, young voters traditionally leaned toward the Labour Party, and older voters toward Conservatives, but, until recently, these differences remained small. In 2010, for example, younger voters were almost evenly split, while older ones favored the Conservatives by 13 points. By last year, however, the political spectrum was much more polarized. In general elections, Conservatives had a three-point lead in the overall national average. Young voters favored Labour by 51 points above that average, while those over 65 favored Conservatives by 32 points more than the average.

A year earlier, the Brexit referendum exhibited a similarly stark contrast, when only a quarter of British youth (ages 18 to 24) voted for the “leave” camp. In comparison, six out of 10 seniors (ages 65 plus) wanted to leave. It appears that a rising nationalist sentiment in British society, which peaked during the Brexit referendum, has deepened the age-based polarization of the “progressive” and “conservative” continuum.

These observations raise fundamental questions. Why are older populations more prone to nationalism? And how can political strategists take this tendency into consideration?

In explaining nationalist tendencies among the old, it can be tempting to resort to cognitive factors. For instance, “making our country great again” could sound like a good idea to those whose health, energy, and sex drive peaked decades ago, when, coincidentally, nations were not as integrated or diversely populated. Thus, nostalgia for the good old days might result from voters confusing the public and personal aspects of the past.

Nevertheless, we can’t dismiss the possibility that people are making rational choices, even when those choices do not seem intuitive at first sight. In this case, the relationship between age and nationalism may have something to do with how people deal with risk. Older people are commonly known to be more risk-averse than the young. A recent study provides convincing evidence for this hypothesis. By using self-reported risk attitudes of a large sample of individuals over years, the study shows that willingness to take risks decreases over the course of life. This reduction is equivalent to a 2.5 percent diversion from stock-market investments, which are considered risky, to safe assets even in the absence of financial advice. Such an age-driven increase in risk aversion could be explained by biological changes or behavioral adaptation to a shorter lifespan ahead and a longer one behind.

Either way, when nationalism favors the familiar landscape of the past—an asset that is owned disproportionately by the old—and dismisses the uncharted waters of an ever more integrated and diverse world in the future, which comes with unfamiliar faces and change, the outcome is predictable. It could be that the old embrace a more nationalistic position than the young solely because they are risk-averse.

Because nationalist rhetoric often objects to free trade and migration, we should also consider the possibility that nationalist bias among senior citizens stems from economic preferences that change with age. For instance, the old consume more services like long-term care, while the young consume more goods like smartphones. Therefore, the higher the share of old people in the population, the higher the demand for services which cannot be imported, and the lower the demand for goods that can.

In a previous study, my colleagues and I tried to explain how this variation in taste could translate into a more protectionist trade policy in an aging society. When demographic aging boosts demand for services, which cannot be imported, some domestic firms could cease producing other goods and start providing services, while others might move overseas where demand for their goods remains strong. This shift could be particularly large if trade barriers are low, because those who move overseas could still freely ship back their products to their home market.

The short-termism of nationalist programs should be communicated clearly to all citizens: One may wish to cut in line while others wait, but when everybody does so, nobody gets to eat the cake.

Moving out of one’s country and closer to a larger overseas market becomes more appealing for a company if it doesn’t have to give up its domestic market. However, if the aging country imposed high tariffs on imports, smartphone producers might be more inclined to stay where they were. In addition, because an aging society would import fewer smartphones than young societies, high tariffs would not hurt consumers as much. Therefore, temptations to introduce “fair” trade policies, such as higher tariffs, may sound more appealing in an aging society, at least in the short-term.

The good news is that cognitive factors, risk aversion, and economic preferences are not always aligned with each other to drive a nationalist attitude in old people. Many services consumed by old people, such as healthcare and long-term care, rely heavily on immigrants in advanced economies, including the United States and U.K. The access to affordable health care, in this case, presents an economic rationale that could work against favoring a monoculture society.

Similarly, conservative risk aversion is not always pro-nation, strictly speaking. In the 2014 Scottish independence referendum, older voters were strongly against secession, including 67 percent of those aged over 70, and 59.5 percent of those between 60 and 69. Even without a rigorous study, it is not difficult to see risk aversion working against a nationalist sentiment in this case. Considering Scottish secession, the “uncharted waters” argument applies to independence after a prolonged period of unity.

Although some drivers of nationalism may eventually cancel each other out, a bumpy road lies ahead. The next few decades will bring an even higher proportion of older people in the most advanced economies, including all member states of the European Union and the United States. These countries constitute the engines of globalization and the core members of the democratic world. If not managed well, the demographic dynamics of their aging populations could introduce unilateral policies that will have harmful long-term effects.

Nationalism and opposition to free trade do not exist in a vacuum. When one country erects barriers, other countries will respond similarly. When a trade war is triggered, the aging country will be hurt more than its partner. While some firms may come back home, the losses from paying more for imports and earning less from exports are likely to be much greater than gains.

Similarly, the drive toward isolationism could be detrimental to political institutions. This recent wave of nationalism has already coincided with a decline in democracy around the globe. The Democracy Index of the Economist Intelligence Unit, which measures the state of democracy in 167 countries by using 60 indicators, has registered a worldwide deterioration in the past few years. The worst decline in global democracy in years was reported in 2017: Not a single region of the world observed an improvement. The regression in advanced economies has been particularly notable; the overlap between the rise of nationalistic agendas and democratic degradation is evident.

Given these grim trends, three lessons emerge from the discussion so far. First, more effort needs to be devoted to understanding the deep connections between demographic change and political inclination. Second, policymakers need to anticipate these trends. In many countries, an aging population can block any policy that does not have significant support from it. Thus, policymakers should carefully analyze the decision-making processes of various demographic groups to understand what it would take to gain their support.

Third, communication is important, but it needs to address reality on the ground. The short-termism of nationalist programs should be communicated clearly to all citizens: One may wish to cut in line while others wait, but when everybody does so, nobody gets to eat the cake.

As the emerging class of politicians and their nationalist agendas have shown, the use of a centrist approach across economic and political spectrums does not always work. A “free trade benefits everyone” message will hardly resonate with a person who lost her job a few years before retirement.

In fact, the mainstream message on free trade needs to be changed, emphasizing that it is beneficial overall but only works for everyone when those gains are redistributed, suggesting that the economy needs more redistribution, not less. Coming from the left side of the political spectrum, this message has been somewhat suppressed, but again, the centrist position—one tilted against this kind of redistribution—misses the chance to address reality on the ground and the effects of globalization on voters.

Blind commitment to a centrist approach can backfire with aging populations, who are already prone to finding a nationalist program appealing. Mapping out policy responses that take into account the multiple drivers of political attitude is a daunting challenge, but one that is essential for developing a sensible strategy. Politicians who ignore demographic trends do so at their peril.