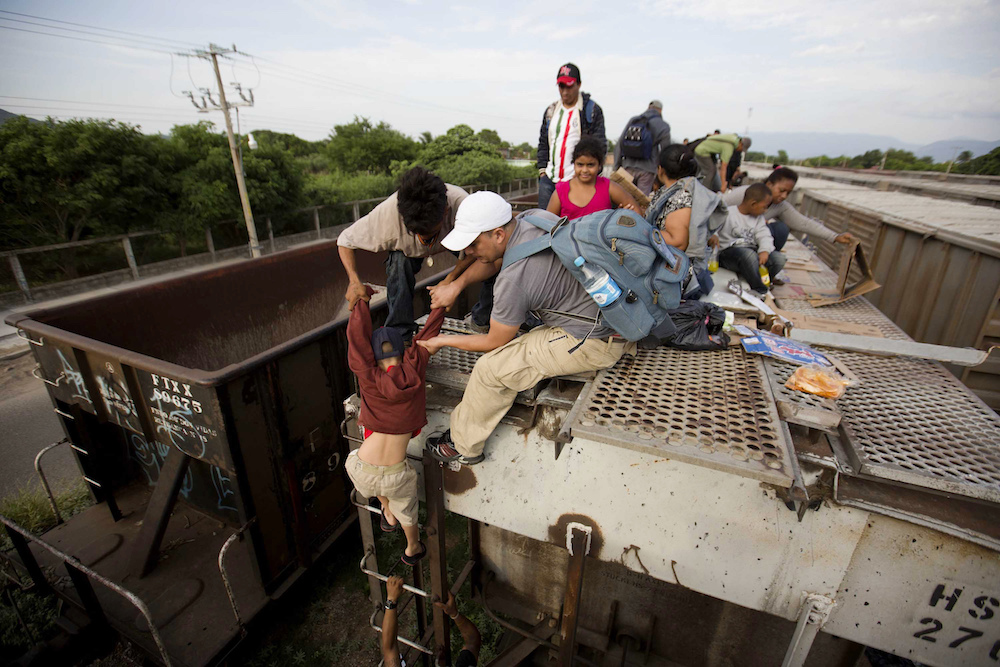 U.S. Attorney General Jeff Sessions’ announcement on April 6, 2018 that all unauthorized border crossers will be federally prosecuted might sound like a reversal of U.S. policy. So might his June 11, 2018 decision that being a victim of domestic violence or gang violence generally will no longer be considered grounds for receiving asylum.

But, as someone who has been analyzing asylum since the 1980s, I look at these announcements and see continuity. Sessions’ policies fit a pattern, going back decades, of excluding asylum seekers from Central America from the human rights protections afforded by U.S. and international law.

Central America should not be singled out in this way. After all, asylum law is supposed to be politically neutral. But the reality for decades has been anything but. Concerns about admitting asylees from Central American countries that are close to us, and who are fleeing from regimes that the United States supports, have led to disparate outcomes for citizens of these nations.

Such exclusions began during the civil wars of the 1980s when Central Americans immigrated to the United States in increased numbers, fleeing political violence in their homelands. Because the United States supported repressive right-wing governments in El Salvador and Guatemala, accepting refugees from those countries threatened to undermine U.S. foreign policy.

In this process, politics trumped reality. Central American civil wars were actually fought over such issues as access to land, a more equitable distribution of resources, and political repression, but the United States saw these wars as part of a Cold War fight against communism. So, for example, the United States provided more than $1 million a day in military and economic assistance to El Salvador, despite its government committing widespread human rights abuses, including massacres of peasants and death squad activity.

In 1984, less than 3 percent of the asylum claims filed by Salvadorans and Guatemalans were granted, in contrast to approval rates in the range of 32 to 60 percent for applicants from Poland, Afghanistan, and Iran. U.S. detention centers also used coercive practices to pressure Salvadorans and Guatemalans to agree to depart the country voluntarily instead of filing asylum claims. Detainees generally were not informed of their right to apply for asylum, were threatened with lengthy detention, and were prevented from meeting with attorneys.

This discriminatory treatment gave rise to a community of advocates who, throughout the 1980s, pursued redress in the courts while also trying to sway public opinion. A class action suit, Orantes Hernandez v. Meese, resulted in a permanent injunction in 1988 preventing coercive tactics against detainees.

The process for Central Americans was so unfair that, beginning in the 1980s, religious congregations declared themselves to be “sanctuaries” for Salvadoran and Guatemalan refugees in order to draw attention to the need for asylum while also challenging U.S. aid to the Salvadoran and Guatemalan governments. Following the conviction of two priests, a minister, a nun and four layworkers on alien-smuggling and conspiracy charges, religious groups and Central American community organizations sued the U.S. government, charging that asylum processes were discriminatory.

This case, known as American Baptist Churches v. Thornburgh or “ABC” was settled out of court, enabling these asylum seekers to file claims under rules designed to ensure fair consideration of their cases. At the same time, the 1990 Immigration Act created Temporary Protected Status (TPS) and designated Salvadorans as the first group to receive it.

By joining forces across political divides, Salvadorans, Guatemalans, and Nicaraguans were able to secure passage of the Nicaraguan Adjustment and Central American Relief Act (NACARA) in 1997. To do so, they, their allies, and Central American leaders argued successfully that the U.S. government had granted these immigrants temporary documentation, and that they should be exempted from immigration restrictions adopted in 1996. Importantly, NACARA provides a precedent for creating a pathway to lawful permanent residency and eventually citizenship for TPS recipients.

During the post-war years, violence in Central American countries continued, but shifted from civil war to gangs and crime. The gang violence is the product of multiple factors: impunity granted to human rights abusers; an abundance of weapons; corruption; income inequality; the trauma of the war years; and the rise of drug cartels and U.S. deportation policies, which have sent U.S.-based gang members to Central American countries.

Central American families—particularly in the Northern triangle of Guatemala, Honduras, and El Salvador—experienced extreme insecurity including forcible gang recruitment, extortion, sexual violence, assault, and murder in the late 1990s and the 2000s. Yet, just as during the war years, the U.S. government is now arguing that the violence experienced by Central Americans is generally not grounds for political asylum. For example, in a 2008 Board of Immigration Appeals decision, three Salvadoran youth who had been beaten, harassed, and threatened with death and rape for refusing to join the MS-13 gang were denied asylum, despite widespread evidence of such abuses, including the shooting and killing of another youth in their neighborhood who had also refused to join.

Sessions’ policies fit a pattern, going back decades, of excluding asylum seekers from Central America from the human rights protections afforded by U.S. and international law.

While obtaining asylum remained restricted, immigrants living in the United States were increasingly treated as suspects, a process of criminalization that increased their risk of being deported. Immigration reforms adopted in 1996 expanded the range of criminal convictions that incurred immigration penalties, restricted avenues for immigrants to legalize their status, and made detention mandatory for many. Secure Communities, a program launched under President George W. Bush and expanded under President Obama, increased collaboration between police, prisons, and immigration authorities, with the result that for noncitizens, coming into contact with the criminal justice system could result in being deported from the United States.

Prosecution of immigration violations escalated to the point that these now comprise a significant portion of the federal docket. Individuals who had spent most of their lives in the United States and who may even have acquired lawful permanent residency were being removed permanently, resulting in devastating family separations. Latinos—particularly Mexicans and Central Americans—are disproportionately targeted in these enforcement practices.

The current administration’s policies toward Central Americans extend this history of criminalization and of restricting access to asylum—by defining the violence that is part of everyday lives as outside the boundaries of U.S. protection. President Trump has repeatedly associated Central Americans with crime and gangs, referring to their homelands as “shithole countries,” and suggesting that all who enter the country without authorization might be MS-13. Such statements fly in the fact of criminologists’ findings that the foreign-born commit fewer crimes on average than do people born in the United States.

Other Trump actions revisit the past. The administration rescinded TPS, or temporary protections, that had been issued to Salvadorans and Hondurans following natural disasters, despite ongoing violence in Honduras and El Salvador. Sessions also reversed progress that had been made in making the legal case for domestic violence and gang violence as a basis for asylum. It’s true that even before Sessions overruled these rationales, asylum cases based on such violence were very difficult to win, with 75 to 80 percent of such claims being denied. But one impact of Sessions’ ruling is that many asylum seekers will not even pass the first hurdle for asylum seekers—interviews at which they must demonstrate credible fear—and therefore will be unable to submit their claims.

Likewise, even though family separations have garnered attention since the Trump administration adopted a zero tolerance policy on unauthorized border crossings, immigrant families have had to contend with separations of various sorts for decades, if not longer. When legalization opportunities were restricted by the 1996 reforms, immigrant parents were unable to acquire lawful permanent residency, which would have enabled them to petition for children who were left behind in their countries of origin to immigrate legally. Temporary statuses such as TPS do not confer the right to leave the United States and reenter without permission from the U.S. government, so TPS recipients have been unable to visit family members in their countries of origin for years. Deportees are often separated from family members in the United States, and are unable to return legally for visits. Such separations are not as dramatic as those that have currently captured public attention, but they are nonetheless devastating. When I have interviewed immigrants who are seeking legalization opportunities, interviewees have broken down in tears describing their inability to visit their parents on their deathbeds to say goodbye.

This history of exclusion has not prevented immigration. On the contrary, a study by the Pew Research Center found that between 2007 and 2015, the U.S. immigrant population from El Salvador, Guatemala, and Honduras rose by 25 percent, at a time when the immigrant population from Mexico declined by 6 percent. Perhaps this is because immigration is driven less by U.S. policies than by conditions in immigrants’ countries of origin. If so, what is being accomplished by exclusionary policies?

Ending the repeated exclusion of Central American asylum seekers would require bringing asylum policies into alignment with the forms of violence that actually occur in the communities these individuals are fleeing. Then, protections must be zealously enforced, for example, by creating meaningful opportunities for individuals to apply for asylum, providing those who pass credible “fear interviews” with temporary permission to remain in the country instead of placing them in detention, allowing parents and children to remain together; in short, caring for victims of persecution instead of punishing them. Doing so would promote family integrity, support human rights, and alter the dynamics of the historic relationship between the United States and Central American nations.