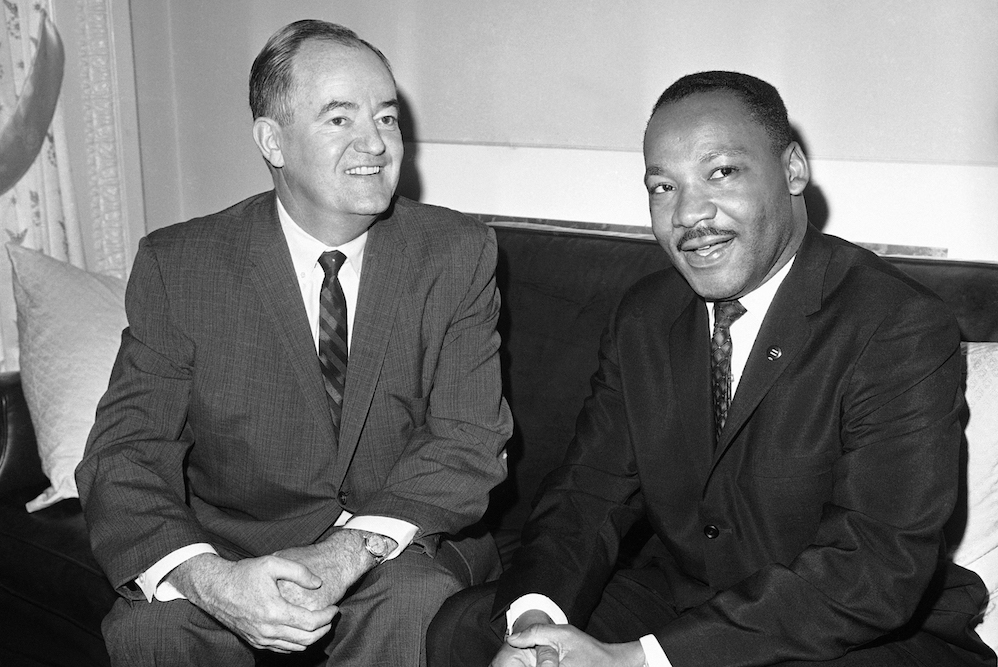 It is one of the great ironies of 20th-century American history: Hubert Humphrey, the foremost proponent of civil rights among American politicians, had little contact with African Americans until age 28.

Humphrey’s distance from people who would benefit from his legislative prowess was a result of biography and history. He was born in 1911 in the tiny prairie hamlet of Wallace, South Dakota, which had no African Americans. In 1919, he moved with his family 50 miles southwest to slightly larger Doland, where he encountered only a few African-American highway workers with whom he traded the newspapers he hawked for rides on their mule-pulled wagons, a practice his mother, Christine Sannes Humphrey, disapproved of.

But young Hubert’s pharmacist father, Hubert Sr., strongly encouraged his son toward a more liberal outlook by reading nightly to him and his three siblings from the works of Thomas Paine, Thomas Jefferson, and Woodrow Wilson. Demonstrating a strong commitment to democracy and social justice, Humphrey made his pharmacy into a meeting house for townspeople to debate local and national issues.

Still, even during young Hubert’s undergraduate years at the University of Minnesota—in a state where African Americans then made up less than .05 percent of the population—he recalled having only one serious conversation with an African-American student.

This changed when Humphrey, who graduated Phi Beta Kappa and won the University of Minnesota’s Forensic Medal for his debate skills, sought his Master’s degree in 1939 at Louisiana State University in Baton Rouge. He chose LSU because the chairman of its political science department was a friend of his Minnesota mentor, and offered him a paid fellowship.

Nearly half of Baton Rouge’s population was African-American, and strict segregation was the order of the day. Humphrey’s sensibilities were jarred when he saw “WHITE” and “COLORED” signs at every public facility. We don’t know if Humphrey made any African-American friends in Baton Rouge; he makes no mention of friends other than Russell Long, the son of Louisiana’s populist governor Huey Long, who was a campus politician and later a colleague of Humphrey in the U.S. Senate. And he spent much of his time on campus, engaged in his research.

He realized, as he recalled in his autobiography, The Education of a Public Man, that he was a “conventional northern liberal,” and that he had thought of blacks only as a group and had not been aware of institutionalized white paternalism. He also recognized that his classmates, living in a city with African Americans, weren’t any more connected; they avoided most blacks. The one exception was an LSU classmate who told Humphrey he loved his “mammy,” an African-American employee of his parents who had brought him up and done more for him than his own mother.

Humphrey’s Louisiana experience convinced him that no one could view black life in Louisiana—Southern segregation—without “shock and outrage.” But it also opened his eyes to prejudice in the North that he had not recognized. His “abstract commitment” to civil rights became one of “flesh and blood,” he recalled in his autobiography.

It was hardly a full awakening to racism. Humphrey wrote his Master’s thesis on “The Political Philosophy of the New Deal,” in which he heaped praise on President Franklin Roosevelt’s willingness to use the federal government to undertake bold experiments intended to stabilize society, preserve capitalism, and establish basic economic security for everyone, especially those most in need. But Humphrey said nothing about the New Deal’s failure to advance civil rights or race relations significantly.

Returning to the University of Minnesota to pursue a doctorate in 1940, the always cash-strapped Humphrey took a Works Progress Administration job directing its Twin Cities Worker Education Program. He traveled the state and soon began speaking out against the deplorable working conditions of lumberjacks, miners, and factory workers—as well as against racial and religious discrimination. He was in favor of establishing a federal committee to ensure fair employment practices, which FDR created in 1941. This work led several public and labor union officials to urge him to run for mayor of Minneapolis.

On his second try, in 1945, Humphrey won. His coalition included strong support from African-American and Jewish communities (though they comprised just 1 and 5 percent of the city’s population, respectively), as well as from organized labor, which provided campaign funds and volunteers. In addition, key members of the business community—including John Cowles, owner and publisher of three major Minneapolis newspapers, including the Star Journal, the Morning Tribune, and the Times—backed Humphrey in the belief he would work to rid the city of its organized crime units.

Nearly half of Baton Rouge’s population was African-American, and strict segregation was the order of the day. Humphrey’s sensibilities were jarred when he saw “WHITE” and “COLORED” signs at every public facility.

Above all Humphrey sought to root out discrimination in Minneapolis, which journalist Carey McWilliams had labeled the “capital of anti-Semitism in America.” He established a Mayor’s Council on Human Relations that organized a major self-survey drawn by Fisk University sociologists; the effort sent 600 volunteers to survey businesses, labor unions, and realtors about racial attitudes and discriminatory practices. This was a groundbreaking idea, advanced by an African American university that was a premier educator of teachers in 1947.

He ultimately convinced the city council to urge real estate developers needing its approval not to put restrictive covenants in deeds—which was one way neighborhoods were segregated by race and ethnicity.

Similarly, Humphrey sought to desegregate bowling alleys, one of America’s most popular after-work facilities at the time. He succeeded in Minneapolis. In 1948, he had the Minneapolis and St. Paul Committee on Fair Play in Bowling sponsor a nondiscriminatory “All American Bowling Tournament.” But, despite a lobbying campaign, he was unable to persuade the American Bowling Congress to induce the owners of the nation’s 75,000 bowling alleys to open their lanes to all players.

Later in 1948, Humphrey, then an aspiring candidate for the U.S. Senate and a speaker at the Democrats’ national convention, stepped dramatically onto the national political stage. His address, delivered despite threats from the White House that he would hurt the party and his own career, called on Democrats to “get out of the shadow of states’ rights and walk forthrightly into the bright sunshine of human rights.” This speech galvanized the convention to adopt the first civil rights platform in the Democrats’ history; it called for equal employment opportunity, equal treatment in the military, protection of voting rights, and safety from lynching.

These advances had political costs. Humphrey’s speech caused some Southern Democrats to bolt the convention and form the Dixiecrat Party. But it also energized President Harry Truman’s campaign—in part by drawing African-American voters in big cities in crucial states—and was greatly responsible for his stunning upset victory over the Republican nominee, New York Governor Thomas Dewey. Humphrey also won his election to the Senate over incumbent Republican Joseph Ball by campaigning on civil rights and “health care for all.”

Humphrey’s 1948 efforts had put civil rights on the nation’s agenda and it would stay there for decades. The senator would keep pushing, despite suffering many bitter verbal attacks from Southern Democrats. Through the middle of the 20th century, he would be the nation’s political leader in advancing the historic civil rights acts of 1957, 1964, 1965, and 1968. These laws were intended to assure every American the right to full and fair participation and equal treatment in every aspect of life, including voting, employment, home ownership, schooling, and military service.

He would lose the presidential election in 1968—the campaign for which he may be best remembered—but he then returned to the U.S. Senate in the 1970s to continue advancing legislation for rights. He became the leading voice of American liberalism and, as Vice President Walter Mondale said upon his death in 1978, “the country’s conscience.”