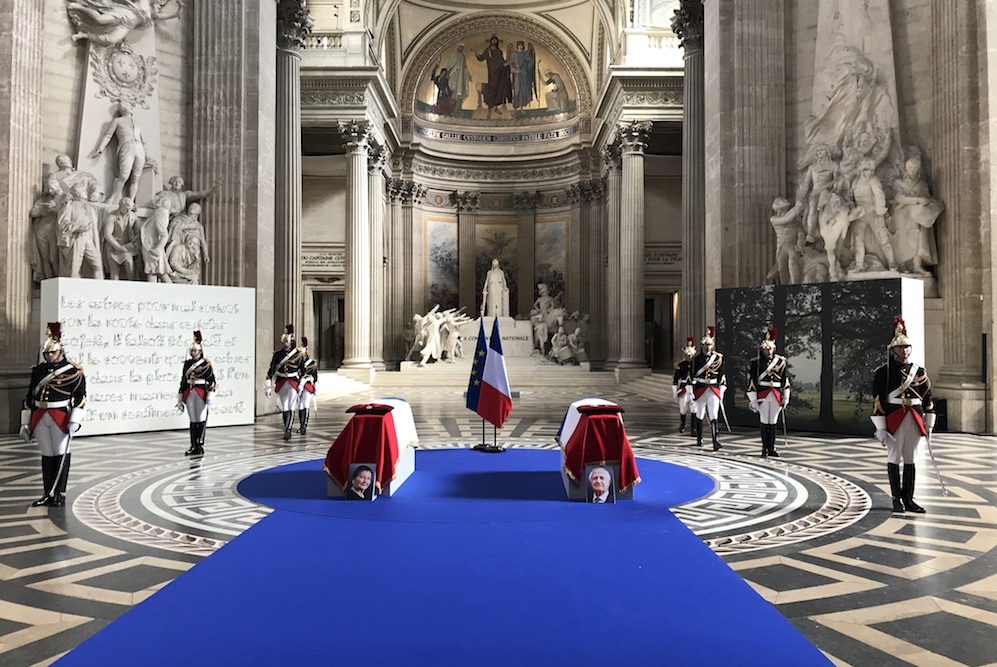 The coffins of Simone and Antoine Veil at the Panthéon mausoleum in Paris. Photo courtesy of Emmanuel J. Lévy/Wikimedia Commons.

When architectural critics gaze at the Panthéon in the Latin Quarter of Paris, one thought often comes to mind: Rarely have so many blocks of stone been heaped so high to so little effect.

This 18th-century pile of stone—despite being dedicated to the patron saint of the city, Saint Genevieve—is as banal as it is big, vacuous as it is vast. In his novel Notre-Dame de Paris (more commonly known as The Hunchback of Notre-Dame), Victor Hugo declared that the design, by the architect Jacques-Germain Soufflot, failed to provide the “sacred horror” expected of great churches. All it inspired, he huffed, was the image of a great sponge cake.

The last laugh was on Hugo: The Panthéon happens to be his final resting place. Hugo’s tomb now gathers dust in this colossal cake’s cold and cheerless crypt, alongside several dozen of France’s most notable figures, ranging from writers and philosophers to war heroes.

But while the Panthéon might be empty of sacred horror, it is filled with secular wonder, crypt and all. This becomes clear in the remarkable history behind the building’s latest chapter: the interment earlier this summer of the remains of French Resistance heroine and courageous politician Simone Veil.

The event, replete with renditions of “La Marseillaise” (sung by the American soprano Barbara Hendricks and the French Army chorus) and the “Ode to Joy” from Beethoven’s Ninth (sung by a children’s chorus), was attended by tens of thousands of spectators, standing under a blinding sun, with many wearing T-shirts emblazoned with the words “Merci, Simone.”

Soufflot had never meant for his creation to become, as one wag labeled it, the “Académie française of the dead.” Commissioned by King Louis XV, the church was completed in 1790, just months before Louis XVI lost his throne (and head) to the Revolution. With the violent shift from monarchy to democracy and from religion to reason, the church’s purpose changed as well. No sooner had it opened for business than it was de-Christianized. Nevertheless, it held on to its saints—though instead of giving their lives to God, the new honorees were those who had given their lives to the nation of France.

But the revolutionary and republican rebranding did not remain for long. France’s 19th century was marked by what historians call les guerres franco-françaises: the epic struggle between reactionaries and revolutionaries, peasants and Parisians, believers and unbelievers that fueled the revolutions of 1830, 1848 and 1870. Inevitably, Soufflot’s big cake was pulled into this series of mêlées, as the two sides repeatedly took turns claiming it. Confused Parisians had only to glance at the building’s front portal to determine the current political situation. If the celebrated phrase Aux grands hommes, la patrie reconnaissante—“To great men, a grateful country”—engraved by revolutionaries was there, you were living under one of the 19th century’s three republics. If it had been removed, it meant one of the three monarchies was back in the driver’s seat.

The Republic won the deciding match in 1885 when Hugo—who by then had become the semi-divine embodiment of the Republic—was laid to rest in the building’s crypt alongside the remains of Rousseau and Voltaire. Among the Panthéon’s many ironies is that these two thinkers, national heroes and neighbors for eternity, had vexed ties to France—Rousseau was a Genevan who was forced to flee France, and Voltaire was a Frenchman who was forced to flee Paris. What’s more, the two men utterly despised one another. Still, as the engraving over the Panthéon’s front portal said, “To great men, a grateful country.”

But while the Panthéon might be empty of sacred horror, it is filled with secular wonder, crypt and all. This becomes clear in the remarkable history behind the building’s latest chapter: the interment earlier this summer of the remains of French Resistance heroine and courageous politician Simone Veil.

Over time, the other meaning of that inscription became clear: the revolutionary trio of values—liberté, egalité, and (by definition) fraternité—applied to just one-half of the nation, the grands hommes. The Panthéon was reserved for men. The one exception was Sophie Berthelot, whose interred husband, the chemist and politician Marcellin Berthelot, had requested a tombeau à deux.

This was no surprise. Women in France would not get the vote until 1945, and would not be able to open a bank account without their husband’s signature until 1965.

Women were only officially welcomed at the Panthéon in 1995. That year, President François Mitterrand declared the Nobel Prize-winning scientist Marie Curie as worthy of “panthéonisation.” And yet, because her colleague and husband, Pierre Curie, accompanied her into the crypt, some observers wondered if an asterisk should be placed next to her name.

For the next two decades, Marie Curie was as good as it got for grandes femmes at the Panthéon. It was not until 2015 that President François Hollande, a socialist like Mitterrand, announced the panthéonisation of two more women, Germaine Tillion and Geneviève de Gaulle-Antonioz. Both women fought in the French Resistance during World War II, both were captured and imprisoned in the Ravensbrück concentration camp, and both continued to fight on behalf of deportees and the dispossessed in the years following their liberation. (No significant other, by the way, accompanied either woman into the crypt.)

After Simone Veil’s death last year, the ensuing campaign to induct the beloved political figure was not limited to women—it was catholic in the best sense of the word. Left and right, men and women, believers and atheists, young and old, clamored for her candidacy.

And though the feminist movement in her day left her ambivalent, Veil would have welcomed recent legal and cultural changes. France’s version of the #MeToo movement, known as #BalanceTonPorc, or #ThrowOutYourPig, has made progress. In March, the national government’s Minister of Gender Equality announced legal proposals, including on-the-spot fines for sexual harassment in public places. In 2022, the government will begin to fine French companies for unexplained wage differences between male and female employees.

Veil’s new tomb in the Panthéon is located in the same section as those of celebrated Resistance figures like Jean Moulin. This reflects Veil’s personal history: She was the lone survivor of a family deported to Auschwitz during the war.

Yet Veil’s most important act of resistance came in 1974 when, as Minister of Health in the centrist government of President Valéry Giscard d’Estaing, she spearheaded the effort to legalize abortion in France. Given the vitriol and violence of her critics, the task would have reduced most anyone else, man or woman, to tears. When Gaullist and religious opponents in the National Assembly were not denouncing Veil’s effort, to quote one infamous speech, “to toss the unborn into crematory ovens,” they played in the vast chamber of the National Assembly a recording of a fetus’s heartbeat. Yet Veil never wavered, and shepherded the proposed legislation into law. The courage and compassion she demonstrated made Veil one of France’s most admired public figures.

In his speech at the Panthéon, President Emmanuel Macron came close to capturing the nature of Veil’s life. “This woman presents us with a life marked by abysses from which she should never have returned and stunning victories only she knew how to achieve. To this mystery of existence and character, this mystery that defies reason and inspires our respect and fascination, the French have a word that is anchored in our national genius. The word is greatness.” 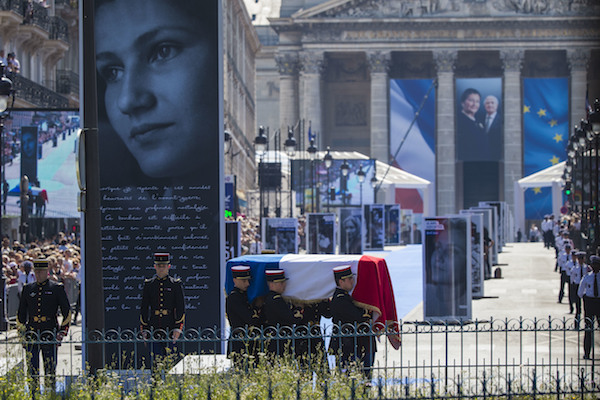 The flag-draped coffin of Auschwitz survivor and former French health minister Simone Veil is carried to the Panthéon mausoleum in Paris on July 1, 2018. Photo by Kamil Zihnioglu/Associated Press.

With the arrival of Veil—whose coffin was accompanied into the crypt by that of her husband Antoine, who had died a few years before—five women have been pantheonized. While the principle of parité, or gender parity, has already been introduced into political life—parties are now obliged to present an equal number of male and female candidates on their electoral lists—it will be slower going at the Panthéon.

Still, a number of French feminist organizations, led by Osez le feminisme (“Dare to Be Feminist”) continue to push for greater balance to be introduced into the recipe of Soufflot’s sponge cake. Needless to say, there is no shortage of candidates, ranging from two other Simones (the philosophers Simone de Beauvoir and Simone Weil) to the revolutionary actor Olympe de Gouges, who authored the Declaration of the Rights of Women and Citizenesses, which opens with the electrifying phrase: “Woman, awake: the tocsin of reason resounds through the whole universe: discover your rights!”

De Gouges ended her days by offering to defend Louis XVI at his trial—an offer, she explained, motivated by her desire to show that women were no less capable of “heroism and generosity” than men. For her opposition to the Terror, she exited from life on the same bloody stage, the guillotine, as did Louis. De Gouges’s life—as well as those of Tillion, de Gaulle-Anthonioz and Veil—reminds us that heroism and generosity have never been, and will never be, gendered. Nor should the Panthéon’s welcome mat. It is time to revise it once and for all: Aux grands hommes et femmes, la patrie reconnaissante.