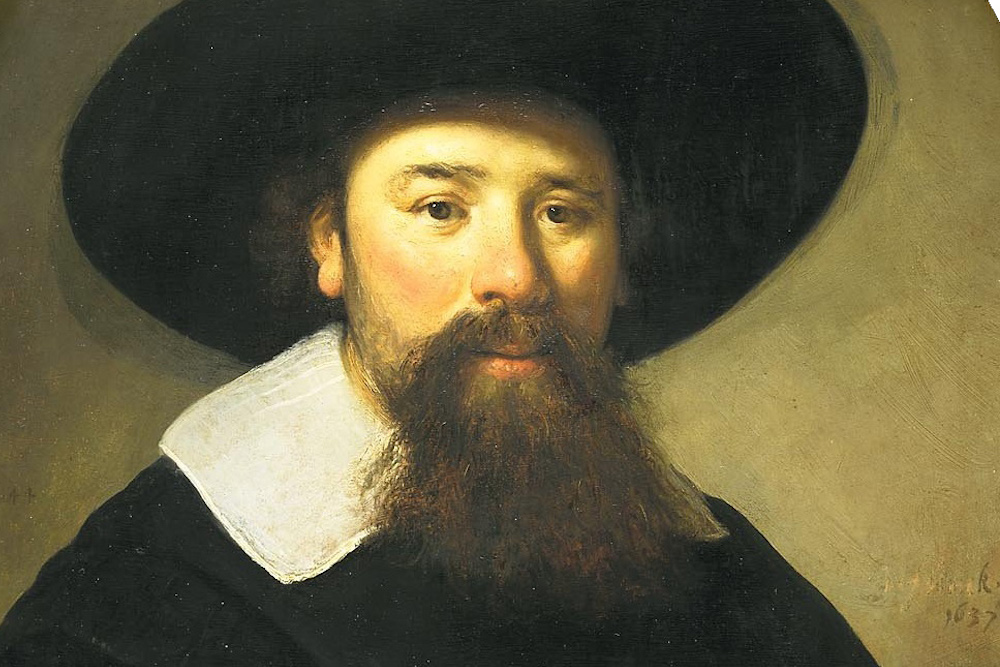 Portrait by Govert Flinck of a man believed to be Menasseh ben Israel. Courtesy of Wikimedia Commons.

Toleration across political and religious divides is increasingly giving way to suspicion and hostility. So it is no small comfort to study the lives of those who, in even more perilous times, were motivated by an ecumenical spirit to bring people of different faiths to mutual understanding.

Very few readers today will have heard of Menasseh ben Israel; but in the 17th century he was arguably the most famous Jew in the world, in no small part for trying to move Jews and Christians past centuries of mistrust and hatred.

Menasseh was one of the most accomplished and cosmopolitan rabbis of his time, and a pivotal intellectual figure in early modern Jewish history. He was among the three rabbis of the “Portuguese Nation” in Amsterdam, a community founded at the beginning of the 17th century that would quickly earn great renown (and envy) worldwide for its mercantile and scholarly vitality. Menasseh played an essential role in that community’s reputation because his books and other writings—in Hebrew, Latin, Portuguese, Spanish, and English—reached a broad and very appreciative audience, among both Jews and gentiles.

Menasseh, a true Renaissance man, did more than anybody in the 17th century to advance the Jewish cause, whether in learning or in politics, and to educate Christians about Jewish religion, literature, and history. He was a scholar, philosopher, diplomat, educator (he was the philosopher Spinoza’s elementary school teacher), editor, translator, printer, and bookseller; no activity seems to have been outside his considerable talents. His network of friends and admirers stretched across the continent. He was, for many, the go-to person for all things Judaic.

And yet, Menasseh felt that, somehow, he did not receive the respect he deserved from his own local community.

Menasseh was born Manoel Diaz Soeiro in Lisbon in 1604. His father had suffered horribly there under the Inquisition’s torturers, and there was reason to believe that he would be arrested again; even though his family was converso and ostensibly Catholic, the authorities suspected them of secret Judaizing. As soon as they could, the family fled Iberia, first to Madeira, then to La Rochelle, in southwestern France, and finally, around 1610, to Amsterdam. The Portuguese authorities’ suspicions of Judaizing were well grounded—when the family reached Holland, the men were all circumcised and took the name “ben Israel,” son of Israel.

Unlike almost everywhere else in 17th-century Europe, Jews in the Dutch Republic were allowed to live where they wanted and practice their religion openly. There was no ghetto, and while there were some restrictions on Jewish activities—they were excluded from most guilds—they could socialize and do business as they wished. It was a remarkable display of toleration in a generally intolerant era. Over the course of the century, Amsterdam and other Dutch towns became a haven for Jews fleeing persecution in Iberia, Eastern Europe, and elsewhere.

Menasseh’s family joined the Beth Jacob congregation, the oldest in Amsterdam’s Portuguese-Jewish community, founded just a few years before their arrival in the city. Manoel, now Menasseh, was a precocious student and had a particularly fine command of both Portuguese and Hebrew. By the age of 18, he was appointed rabbi (hakham) of the Neve Shalom congregation. Many non-Jews came to the synagogue to hear his sermons, which were reportedly both rhetorically splendid and intellectually stimulating. He was also praised for his knowledge of Scripture.

Other rabbis of the community, however, had doubts about his skills as a Talmudist. And he took it as a great insult when, in 1639, with the merger of the three congregations, he was appointed third in rank among the rabbis. His relations with the congregation’s lay leadership were rocky, and he chafed under what he believed were undignified limitations put upon him—such as not being allowed to preach as often as he would have liked, and being required to teach in the elementary school. The highlight of his career occurred in 1642, when he was chosen to deliver the welcoming address on the occasion of a visit to the synagogue on the Houtgracht by Stadholder Frederik Hendrik (the highest political and military officer in the Dutch provinces) and Queen Henrietta Maria of England (wife of Charles I). It was one of the few times that Menasseh was actually given a position of honor.

With the narrow scope of his rabbinical duties, as well as his meager compensation, Menasseh had no choice but to direct his energies into other projects. He ran one of the community’s yeshivot, sponsored by the brothers Abraham and Isaac Pereira (Spinoza, as a young adult but before his excommunication in 1656, may have been one of its attendees), and was a beloved teacher. But his work there demanded much of his time.

Menasseh, like the other rabbis, also engaged in business. With his brother and brother-in-law, he imported goods from the West Indies and Brazil. But he felt that having to supplement his salary as a rabbi in this and other ways was demeaning. “At present, in complete disregard of my personal dignity, I am engaged in trade … What else is there for me to do?”

Menasseh’s real love was his printing press. He was the first printer of Hebrew books in Amsterdam, and he quickly gained an international reputation for the quality of his work. He published Pentateuchs, Hebrew Bibles, prayer books, and editions of the Mishnah, as well as numerous treatises and literary works in Spanish, Portuguese, Hebrew, Yiddish, and Latin. He even collaborated on various projects with gentile scholars and artists, including, it seems, Rembrandt. Because of Menasseh ben Israel, Amsterdam was, for a time, the center of the Jewish publishing world in Europe.

For many of the Portuguese Jews in Holland, Menasseh’s international celebrity was a source of pride. These wealthy Sephardic merchants and professionals appreciated the renown he brought to the community.

Menasseh also acquired great fame for his own writings, especially among Christians, to whom some of them were directly addressed. He was seen among non-Jews as the foremost Jewish spokesman of his time. Gentiles sought him out as a teacher and consultant. “[He is] a learned and pious man”, wrote Gerard Joannes Vossius, the celebrated Dutch scholar and theologian whose son studied Hebrew and Jewish literature with Menasseh. “If only he were a Christian.”

Menasseh, more than anyone else, assumed responsibility for explaining the doctrines and beliefs of Judaism to the gentile world. He never shied away from controversy, and he was willing to be the Jewish representative in exactly the kinds of polemical debates that many Christians sought (to convince the Jews of the error of their ways and lead them toward salvation) and most Jews feared. For many of the Portuguese Jews in Holland, Menasseh’s international celebrity was a source of pride. These wealthy Sephardic merchants and professionals appreciated the renown he brought to the community.

His extracurricular activities, however, caused the rabbis and lay leaders of the Amsterdam Portuguese no small amount of concern. They were constantly warning congregants that, since they were still technically refugee-guests in the Netherlands, it would be best to keep a low profile. They were especially cautious about crossing the line that the Dutch had explicitly drawn regarding theological debates between Jews and Christians. Menasseh’s cosmopolitanism and many relationships outside the community may explain the troubles he had with the other rabbis and with the members of the ma’amad, or governing board. (He was even issued an excommunication (herem) on one occasion for a disturbance he had been making over the way one of his relatives had been treated by the board.)

Throughout his life, Menasseh was guided by the Messianic hope for divine redemption and the idea that this would not happen until the people of Israel were completely scattered across the globe. Only then could they be reunited and restored to their kingdom by God’s anointed one. This conviction was behind what Menasseh hoped would be the crowning achievement of his life: arranging for the readmission of the Jews to England, from which they had been banished since 1290.

Accompanied by his son Samuel, Menasseh crossed the English Channel to make his petition for readmission in 1655. In his presentation to the Lord Protector Oliver Cromwell, he appealed to both theological and (perhaps more importantly) economic considerations. He wanted to bring to Cromwell’s attention the financial benefits that usually accrue to a country with a thriving Jewish community. After noting that “merchandising is, as it were, the proper profession of the nation of the Jews,” Menasseh went on to remind Cromwell that “there riseth an infallible Profit, commodity, and gain to all those Princes in whose Lands they dwell above all other strange Nations whatsoever.”

Cromwell was quite taken with the Dutch rabbi and gave him a sympathetic hearing. Public opinion, however, was by no means so well-disposed toward readmission. Some argued that strong and humiliating restrictions should be imposed on the Jews; they would certainly not be granted many of the privileges or rights that they had been enjoying for decades in Holland.

After several sessions, the conference convened by Cromwell to consider the issue was deadlocked, and in the summer of 1657 it adjourned before anything was formally resolved.

Menasseh was greatly disappointed by this turn of events, particularly since he had devoted several years of his life (two of them in England) to this project. Cromwell’s tacit permission for Jewish settlement would not begin evolving into formal readmission for another decade or so, but Menasseh did not live to see it.

He was devastated by the sudden death of his son Samuel in London that September, and as Menasseh bore Samuel’s body back to across the Channel for burial two months later, he was a broken man. He died several weeks later.