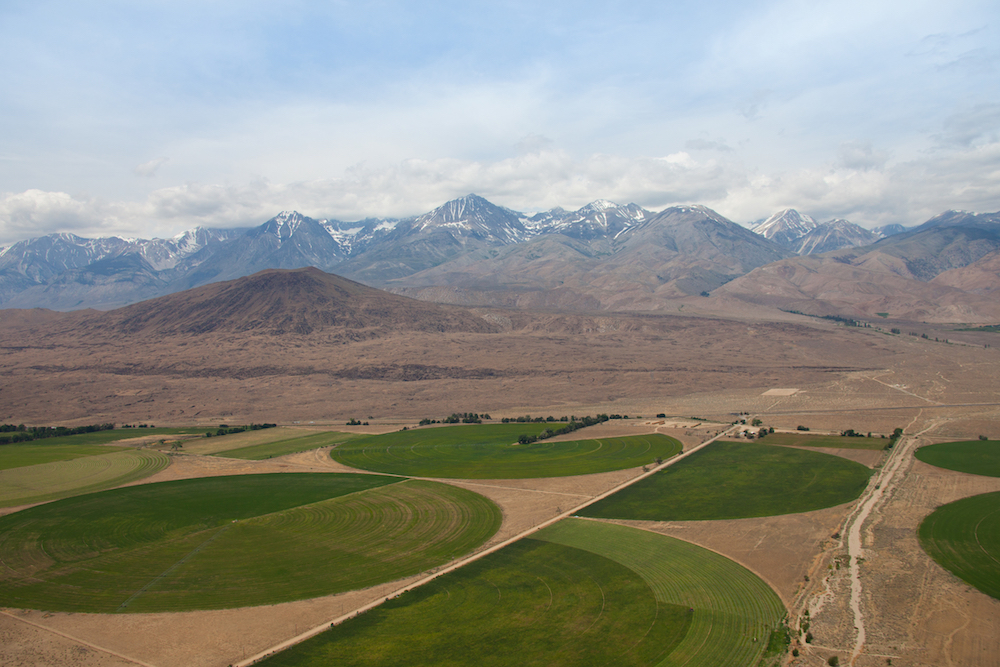 If you live in the Great Plains, sooner or later you’ll get a question about those “crop circles” that can be observed from airplane windows during flights over the region. The answer is contained in the question: Put simply, they are circles of cropland.

The circular pattern, however, is different from the regular patchwork many people imagine traditional farm fields to be. The shape is the result of the center pivot irrigation, a development of the post-World War II era that profoundly changed the course of American food production. In fact, the rise of center pivot irrigation turned the Plains—an area that had been dry land for more than 100 years—into a place that could sustain thirsty crops such as corn, creating an agricultural and economic powerhouse that carries the seeds of its own destruction.

In the early 19th century, the first Euro-American explorers labeled the region between the Rocky Mountains and the 100th meridian as the Great American Desert, a depiction that had remarkable staying power. For many years, American political leaders and other observers decried the prairies as waste, unable to support civilization, even though Native Americans had made homes there for thousands of years. The geological record tells us that many of those explorers who saw a desert arrived in drought years. Those who arrived in wetter years saw the region in greener hues, presuming that the land was a potential garden simply waiting for a gardener.

This promise of a garden-in-waiting was partially true. Very quickly, settlers and boosters discussed lending nature a hand through irrigation projects. Diverting water from rivers through canals provided water for thirsty crops such as alfalfa and corn. Such surface irrigation had limits, though. Users needed to be close to rivers and were dependent upon the variable, seasonal flow of those waters.

By the late 19th century, farmers had started pumping groundwater from wells, first using power from windmills—which became ubiquitous—and later from gasoline engines. But these techniques were expensive, far beyond the reach of most settlers. Even for those who could afford them, it was almost impossible to pump enough water to make a difference on a large scale. The groundwater was deep, sequestered between and among rock, gravel, and clay in a vast underground reservoir now known as the Ogallala Aquifer.

Groundwater irrigation from the aquifer received a boost in the 1930s and 1940s, when pumps powered by automobile engines accessed water from greater depths. (Before long, government investment in rural electrification helped farmers power a growing share of the irrigation pumps with electricity; later, low-cost natural gas became the fuel of choice.) Irrigators laid pipes across fields of crops, with sprinklers spaced at intervals. The practice was labor-intensive, requiring a lot of workers to move the pipes for seedbed preparation, for cultivation of row crops, and for harvest.

The 1930s also witnessed a protracted drought across much of the country, which brought into question the suitability of the region for agriculture. It was during the “Dirty Thirties” that a portion of the region in Colorado, Kansas, Texas, and the Oklahoma panhandle, suffering from extreme conditions, became known as the “Dust Bowl.” Government soil experts asserted that the solution was a retreat from agriculture across much of the country. They proposed classifying each acre according to its productive capacity and buying out land deemed as “submarginal.” The end of the drought and the onset of World War II, however, allowed the resumption of maximum production and scrapped the dreams of land use planners.

In 1948, an innovative Nebraska farmer named Frank Zybach developed a new type of sprinkler system, the center pivot, which he patented in 1952. Placing the pump at the center of the field next to a well, irrigation pipes supported by trusses were mounted on wheeled towers that could make a circuit of the field under their own power, leaving that distinctive circle pattern. Gun-style sprinklers sprayed water out from the pipes at set intervals, with smaller nozzles closest to the pivot and the largest nozzles at the end of the line. The system could cover 133 acres of a 160-acre field, and didn’t have to be disassembled by workers when it was time to plant, till, or harvest.

Center pivot irrigation supported local high schools, clubs, churches, and a whole way of life that would have literally dried up if the fields were less productive.

Ever more powerful motors allowed irrigators to increase the systems’ scale, with the largest set-ups covering all but the corners of a 640-acre section of land. Over time, farmers positioned sprinkler nozzles closer to the ground, resulting in less evaporation. During the return of drought conditions in the 1950s, those who had chosen to irrigate had an advantage over those who did not, which convinced many latecomers to get on board. In 1993, historian John Opie observed that industrial irrigation that emerged in the Great Plains was a three-legged stool supported by fertile land, plentiful and low-cost groundwater, and inexpensive fuel.

Center pivot irrigation was a technological triumph—and it also transformed the agricultural geography of the country. With feed crops becoming available in the Great Plains and easily portable via the new interstate highway system, feedlots and meatpacking plants moved to the region. An abundance of low cost, non-unionized labor and low-cost water for raising livestock and processing meat led the area, where 160 acres of land could previously support just one steer, to become a center for some of the world’s largest high-density livestock feedlots with hundreds of animals per acre. Large-scale swine production facilities have thousands of animals under one roof. Any one of these farms requires more water for drinking and waste removal than a typical city: A farm of 20,000 hogs uses far more water than a community of 20,000 people.

Water for irrigation and large-scale animal feeding didn’t only grow crops and livestock, it gave life to the Great Plains communities that depended on agriculture. Families and laborers shopped at local retailers and deposited wages in local banks, keeping small towns alive, and irrigators paid the property taxes that sustained local governments. Center pivot irrigation supported local high schools, clubs, churches, and a whole way of life that would have literally dried up if the fields were less productive.

The drought of the “Dirty Thirties” had exposed the limits of the Great Plains, raising the question of whether large parts of the region were suitable for agriculture, but the adoption of center pivot technology changed everything. For irrigators and their allies, the development of the center pivot “crop circle” was entirely beneficent. History, they could claim, was on their side. By the 1980s, irrigators from Texas to Nebraska sunk tens of thousands of wells, drawing on the massive Ogallala Aquifer. Irrigation, combined with new hybrid seeds, fertilizer, and pesticides continued to bring high productivity to an arid region. 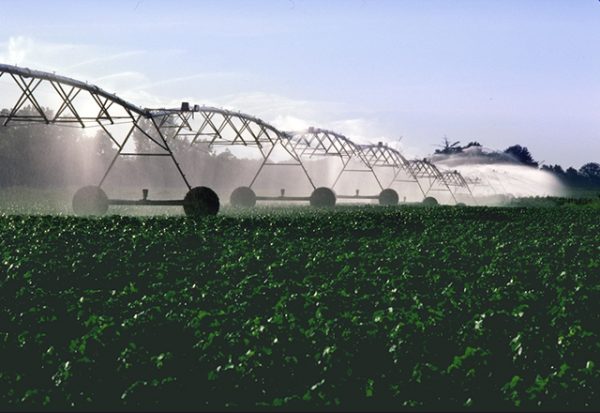 It is little wonder, then, that for many people on the Great Plains, water regulation is a dirty word. Attempts to manage groundwater through local authorities during the 1970s relied on voluntary compliance—and there was so much money to be made with cheap water that regulation, many irrigators reasoned, constituted a violation of the natural order of the Great Plains and wasn’t worth the effort. It is easy to see why: The center pivot irrigation regime had come to seem inevitable, like a phenomenon of nature. When I was young, growing up in the area, I thought it was as natural as the seasonal migration of geese, ducks, and Sandhill cranes, and as inevitable as tornado season.

Center pivot technology epitomizes much of what it is to be an American. It was a technological triumph that enabled a production revolution. The people who built it took pride in their achievement: They were American inventors who created something out of almost nothing. But the system also drew on less-productive American impulses—not just ingenuity and drive, but also unchecked resource use and ever-increasing scale.

In recent years, it has become apparent just how finite the Ogallala Aquifer is. While water levels have increased in some areas, in most parts of the aquifer they have declined at a rate faster than natural recharge—sometimes by a foot per year—because of production agriculture. As of a decade ago, geologists estimated that there were less than 100 feet of saturated thickness remaining, with a minimum of 30 feet of thickness needed for successful irrigation.

By the time irrigators sensed the limits of groundwater irrigation, the region was stuck in what historians call an infrastructure trap: The success of center pivot irrigation has thwarted alternative visions for developing these dry areas. Capital investment in wells, pumps, center pivots, other equipment, and buildings have made it difficult to transition to less water-intensive farming practices. Consequently, change has been modest.

In 2013, a group of farmers in Kansas created a 99-square mile conservation zone in which all participants reduced their water use. As one farmer stated, “We had to change the culture. We took water for granted.” As of 2018, many of those who reduced their water use claimed that agriculture can be profitable even with reduced pumping. But efforts like these are the exception to the rule. The unwillingness to compromise short-term gain for long-term sustainability, of course, is just as American as the ingenuity that created center-pivot irrigation the first place. What a strange bind that for residents of the Great Plains, unchecked depletion of a major groundwater source has foreclosed options for future growth in the region.