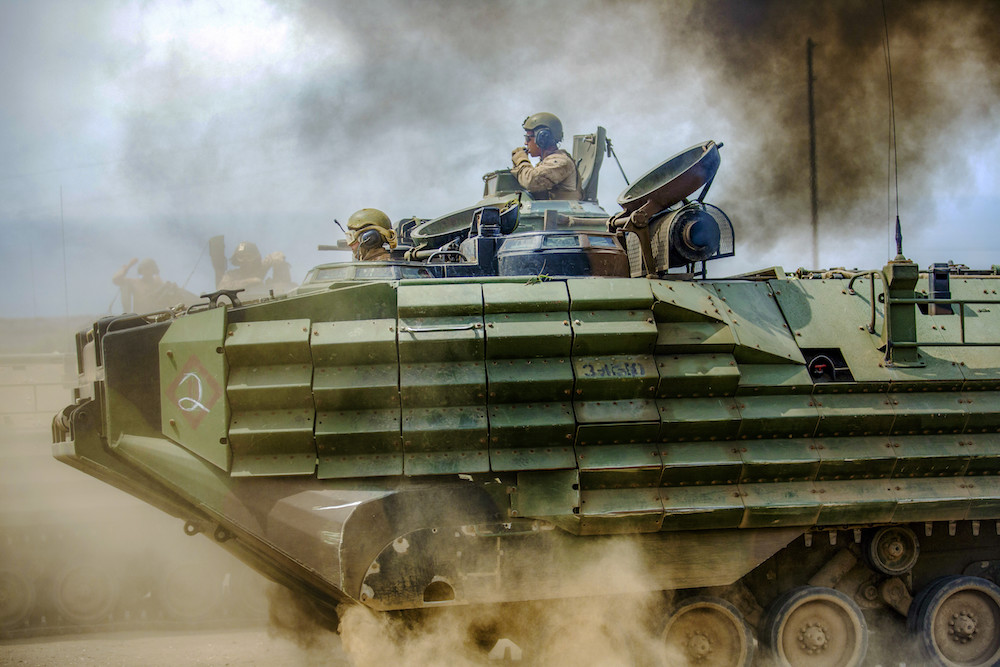 Marines operate an assault amphibious vehicle during a simulated mechanized raid at Marine Corps Base Camp Pendleton in Southern California. Photo by Pfc. Brendan Mullin. Courtesy of the U.S. Department of Defense.

The American military may be the finest fighting force in the history of the world. But how long can it defend Camp Pendleton?

Marine Base Camp Pendleton is best known as our state’s signature military facility, a center for training the men and women who fight for our country.

But Pendleton is also one of our state’s most desirable pieces of land, making it an increasingly inviting target in a coastal Southern California starved for housing, parks, infrastructure, and transportation. In the years to come, trends in economics, budgets, politics, demographics, environment, and warfare itself will create pressure for Californians to take at least some of it back from the federal government.

The military’s defenders will ridicule this suggestion, but here’s the reality on the ground, soldier: Camp Pendleton may be too wonderful for the Marines to hold it forever.

It’s the largest coastal open space between Santa Barbara and the Mexican border. At 200 square miles, it covers more ground than the sprawling city of San Jose and is four times larger than San Francisco. Its beauty is legendary: Major General Graves Erskine, the base commander after World War II, called it “the finest post in the world.”

But Pendleton’s future hasn’t received much public attention, even though it touches contested Congressional districts at the front lines of this fall’s political wars. This may be because Pendleton’s charms remain mostly hidden.

Many Californians think of Pendleton as merely the 17 miles of coast it occupies along Interstate 5 between L.A. and San Diego, but that’s only a fraction of a vast compound running 10 miles inland, nearly to Riverside County. The property offers scenery so diverse—mountains, canyons, bluffs, mesas, estuaries, coastal plains, beaches, lakes, a bison preserve, and a free-flowing river—that it can feel like a militarized microcosm of California itself.

This diverse geography explains the place’s military value. Camp Pendleton is the Marines’ largest West Coast expeditionary training facility, offering a wide variety of training not only for Marines but also other U.S. military branches and civilian agencies. The grounds have prepared marines who raised the flag at Iwo Jima, landed at Inchon, and fought in Vietnam’s jungles, Afghanistan’s mountains, and Iraq’s sands.

Today, tens of thousands of people live on the base, and the daytime population can swell to 100,000, though people occupy less than 20 percent of the camp’s land. Small-town settlements of housing and training facilities are scattered around the base (like in the San Mateo area toward Orange County, where signs display the 1st Battalion, 5th Marines’ memorable motto, “Make Peace or Die”). But most development is on the base’s southern and eastern sides, near the northern San Diego County communities of Oceanside, San Luis Rey, and Fallbrook (the last of which has been engaged in a decades-long legal battle with the base over water rights).

Those who live and work at Camp Pendleton lack for little in services. The base has a new half-billion-dollar naval hospital, car washes, grocery stores, a scuba center, theaters, a museum, a YMCA, the Leatherneck Lanes bowling alley, most established franchise eateries (from McDonald’s to a Coffee Bean & Tea Leaf), a championship golf course, a par-3 golf course, mini-golf, a lake with fishing and campgrounds, 11 fire stations, five public schools, four ranges for recreational shooting, three chapels, two hotels, two travel agencies, three recycling centers, 14 barbershops, eight dry cleaners, and two tailors. The official base guide estimates the total value of land and improvements at more than $1.7 billion, but that seems low.

Indeed, Pendleton has been quite an investment. The land—a rancho that once belonged to the brothers Andrés and Pio Pico—cost just $4.2 million in 1942 when the military, seeking a training base for the Pacific theater, seized it. It was named for Marine Major General Joseph Pendleton, a Coronado mayor who had lobbied for a West Coast training base for Marines.

For decades, the Marines have successfully defended the base against those most rapacious of California enemies—real estate developers—who sought to build retail, housing, and airports. The military has made some strategic concessions, permitting the popular San Onofre State Beach and the San Onofre nuclear power plant to operate on its property.

Indeed, Camp Pendleton’s record as an “ecological buffer,” as the base site puts it, has been a wise strategy for defending the base from incursions. Generations of commanders, backed by environmental staff and research and state partners, have protected 18 threatened and endangered species (notably a small songbird known as the least Bell’s vireo) and revived native habitats, particularly near the Santa Margarita River, which flows freely for 10 miles through the base to the Pacific.

“Camp Pendleton has proved that national security and natural security do not have to be mutually exclusive,” writes environmental journalist Marilyn Berlin Snell in her smart new book, Unlikely Ally: How the Military Fights Climate Change and Protects the Environment. She writes that Pendleton also advocates for environmental protection off-site, so the base does not become a “last refuge” for species, which would limit its flexibility in military training.

The property offers scenery so diverse—mountains, canyons, bluffs, mesas, estuaries, coastal plains, beaches, lakes, a bison preserve, and a free-flowing river—that it can feel like a militarized microcosm of California itself.

But having such a magnificent piece of land in the midst of urbanizing Southern California is provocative. The first frontal attack on Pendleton’s perimeter has come from San Diego business interests desperate to add an airport before Lindbergh Field reaches capacity in 2035. Cal State San Marcos researchers found that the best place for a large, international airport serving all three counties is Camp Pendleton. Such an airport would provide at least 100,000 jobs and billions in economic activity, while requiring less than 5 percent of the base’s acreage.

Pendleton has fought the airport and Orange County proposals for a toll road through the base. But Pendleton, which already is traversed by three different rail services, is a possible hub for future transportation networks. In a state that is not producing enough college graduates, Pendleton’s open space and location makes it a natural future home for universities seeking expansion. And as California’s housing crisis deepens, how long before developers look to Pendleton as part of the solution?

Pendleton also is likely to become part of the debate over Californians’ access to the coast. Today, in defiance of the state constitution’s guarantees, many wealthy landowners are restricting such access. But the public owns the Camp Pendleton property, through the U.S. government, which makes it a natural place for a massive new state park or nature preserve.

The military maintains that surrendering any Pendleton land undermines its training mission. But in an era in which wars are conducted by drones or online, how much does the military need Pendleton? Yes, the coast provides amphibious training, but there hasn’t been a major Marine amphibious assault since 1950. And North Carolina’s Camp Lejeune is another Pendleton-sized base that accommodates varied training.

If Americans ever consider larger questions of budget policy, Pendleton could become an easy target. Does the United States, with $1 trillion annual deficits and having spent trillions on Iraq and Afghanistan, require a secondary land force in the Marines? Is military training the highest-and-best use of valuable California land?

There’s also this unpleasant reality: Pendleton serves a Commander-in-Chief who treats California like an enemy nation. A Time report said Trump plans to detain 47,000 migrants at Camp Pendleton under border policies that include child detentions and systematic violation of refugees’ rights. If Pendleton were actually used for such outrageous purposes, California’s leaders would be justified in demanding that the feds leave.

The notion of a Camp Pendleton with a diminished military presence, or without the military at all, might seem unthinkable. But, at one time, so was the idea that the military would depart the Presidio in San Francisco or Fort Ord on Monterey Bay. Both have productively transitioned to civilian use. Like them, Camp Pendleton is a California place big and beautiful enough to serve us all.