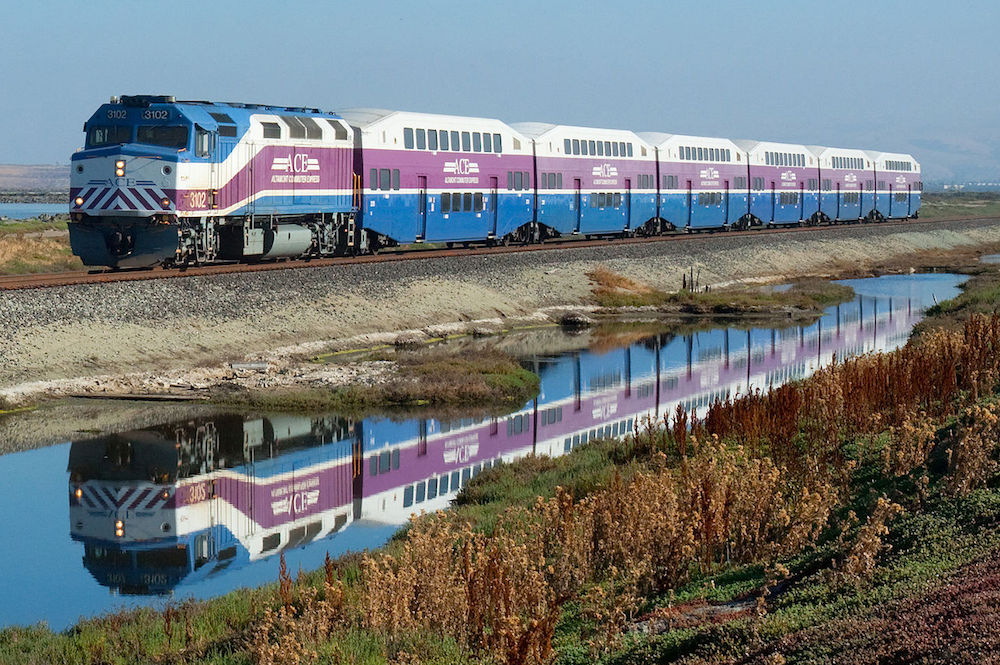 As the ACE Train pulls into the Santa Clara station, the conductor pops out—and begins apologizing for his train.

“I’m sorry, but this is not the Amtrak!” he bellows, loud enough to be heard by all boarding passengers on the long platform

“And this is not Caltrain! If you want the Caltrain to San Francisco, do not board this train!” he yells.

This warning is useful: The ACE Train uses some of the same tracks but doesn’t go the same places as Amtrak and Caltrain. It’s also fitting: The ACE Train is important to California because of what it is not.

It’s not a service that operates around the clock, like L.A.’s Metro. It’s not charming and tourist-friendly, like San Diego’s trolley, and it doesn’t connect our fanciest precincts and companies like BART. It’s not expensive to construct, like the high-speed rail project. And it’s not losing riders, like so much transit these days.

Here’s what the ACE Train is: a real, live, and unappreciated story of successful transportation in California. And while its story is modest and narrow for now, it is planning expansion in ways that—if Californians can move past the brain-dead populist politics of the gas tax—should point the way to a future in which Californians can move around more easily.

The ACE—for Altamont Corridor Express—is modest. Its service consists of just four round trips each weekday—limits that reflect the fact that it shares tracks with Union Pacific. ACE sends four trains from Stockton to San Jose, via the East Bay in the morning, and sends four trains back from San Jose to Stockton at the end of the day.

The ACE Train works because it is pure commuter rail, addressing the mismatch between where the jobs are in the Bay Area and where people can afford to buy homes. Every morning ACE takes residents of places like Livermore, Lathrop, Tracy, and Manteca to their jobs in the East Bay and Santa Clara County, and returns them home in time for prime time television. In the process, it keeps them off the madness-inducing parking lot that is the 580 freeway.

ACE started 20 years ago with just two daily round trips, backed by a joint powers authority and funded by a sales tax increase in San Joaquin County, whose residents suffer from some of America’s longest commutes.

The last six years have seen the ACE Train double its ridership to more than 5,000 people per day and more than 1.3 million people annually. At a time when transit use has been flat in major metros, ACE is one of the fastest growing train lines in the country.

ACE’s success suggests that California needs a conversation about inter-regional transit that is more thoughtful than our current one, which focuses almost exclusively on the costs of the high-speed rail project. What we should be talking about is whether high-speed rail will offer smart and seamless connections to other modes of transportation, making it easier for Californians to get where we need to go. The example of ACE suggests that by smartly expanding our lesser-known commuter rail lines—like the Metrolink in Southern California, the Coaster in San Diego, the SMART Train in the North Bay, and the aforementioned Caltrain on the Peninsula—we could build an integrated web of transit that would make our daily lives easier. 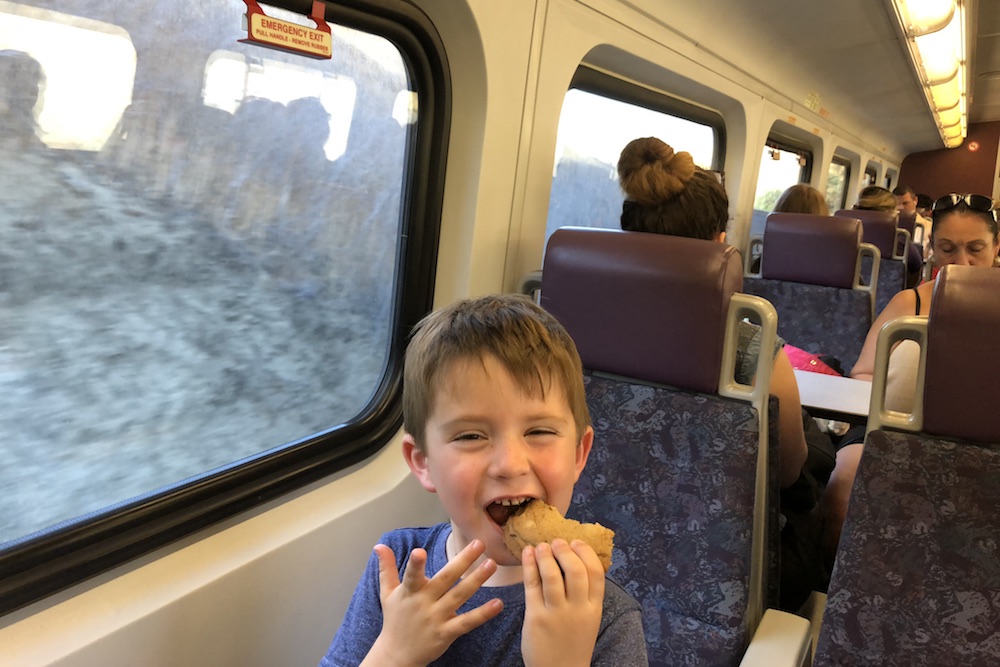 The ACE train is an example because it has improved thoughtfully and incrementally, keeping the needs of its riders in mind. Right now, ACE is expanding service on its existing route by buying cleaner-burning locomotives that allow it to expand from trains that are currently seven cars to 10-car ones. It could add Saturday service in 2019.

In the next few years, the service is scheduled to expand its geographic reach. Under the mantle of creating “Valley Rail,” ACE will push in two different directions at once. In the 2020s, one new branch of the service will head up to the state capital, with new stations in Lodi, Elk Grove, Sacramento, and Natomas, ending with a shuttle to Sacramento International Airport. The other branch will extend south to the cities of Modesto and Ceres before eventually connecting to Merced. In that way, ACE, in combination with expanded service on Amtrak’s San Joaquin line, would form a triangle between three regions—the Bay Area, the Capital Region, and the San Joaquin Valley.

This will also put ACE at two of the most important new transportation hubs of 21st-century California.

The first is San Jose’s Diridon Station, which already links together Caltrain, Amtrak, and Santa Clara’s VTA light-rail system. High-speed rail’s first phase would end there, and the station is also next door to the site where Google wants to build a massive new “village.”

The second hub is downtown Merced, which would be both an ACE terminus and a stop on high-speed rail. That old downtown is already transforming, as the University of California’s newest campus, which was built in the fields outside Merced, expands into its downtown.

Unfortunately, this second extension—to Merced and Modesto—is endangered because it is funded by the controversial gas tax increase that Proposition 6, on this November’s ballot, would repeal.

The gas tax is a statewide political battle, but the geographic center of the fight is the ACE corridor. Two lawmakers from there—State Senator Anthony Canella, a Republican from Ceres, and Assemblyman Adam Gray, a Democrat from Merced—provided their votes in favor of the gas tax in exchange for $400 million for the ACE expansion to serve their communities.

If Prop 6, which is popular among Republicans, passes, the ACE expansion will be threatened. Democratic congressional candidate Josh Harder has cynically come out in favor of Prop 6, even though it would hurt his hometown of Modesto, to create political problems for the area’s incumbent Republican congressman, Jeff Denham, who is heavily funded by transportation lobbies. Denham was previously such a champion of ACE that he held a town hall on the moving train. Now Denham is trying to play the issue both ways: He has quietly endorsed Prop 6 to appease his tax-hating GOP base, while also refusing to give the measure money or vocal public support.

Fortunately, riding the ACE is less complicated than voting on it. One recent afternoon, I boarded the train at its origin, Diridon in San Jose, and then marveled at the big crowds that embarked at the next two stations. The first, Santa Clara, has a shuttle bus to San Jose’s airport, while the second, Great America, is next to the 49ers’ new stadium. The platform there was mobbed with employees of Cisco and other tech firms that run company buses between their offices and ACE.

By the time the train had passed a beautiful stretch along the southeast edge of the bay and stopped in Fremont, there was no longer a seat to be had. A group of Cisco engineers held a business meeting around one table on the second floor of the rail car. At the Pleasanton stop, new riders, who use a shuttle bus connecting with the BART system there, squeezed on.

The train slowly emptied out over the next four stops—at Livermore, Vasco Road, Tracy, and Lathrop/Manteca—as people poured into jammed parking lots to retrieve their vehicles. Some had brought bicycles and rode off on them. ACE riders told me that the traffic jams getting into these station lots is the most difficult part of their whole trip. The crowding might get worse: New construction of housing and retail was visible near most stops. The other complaints I heard were about the strength of ACE’s Wi-Fi, and the cost of the train (monthly passes can run more than $300, and round-trip tickets can exceed $20). But the trip is still cheaper and easier than driving.

My train was mostly empty on the last leg to the lovely Cabral Station, on the edge of Stockton’s downtown. From there, I would walk to a dinner interview at Angelina’s Spaghetti House, a great and unfussy old Italian restaurant. And I didn’t have to hurry—the ACE had arrived five minutes early.