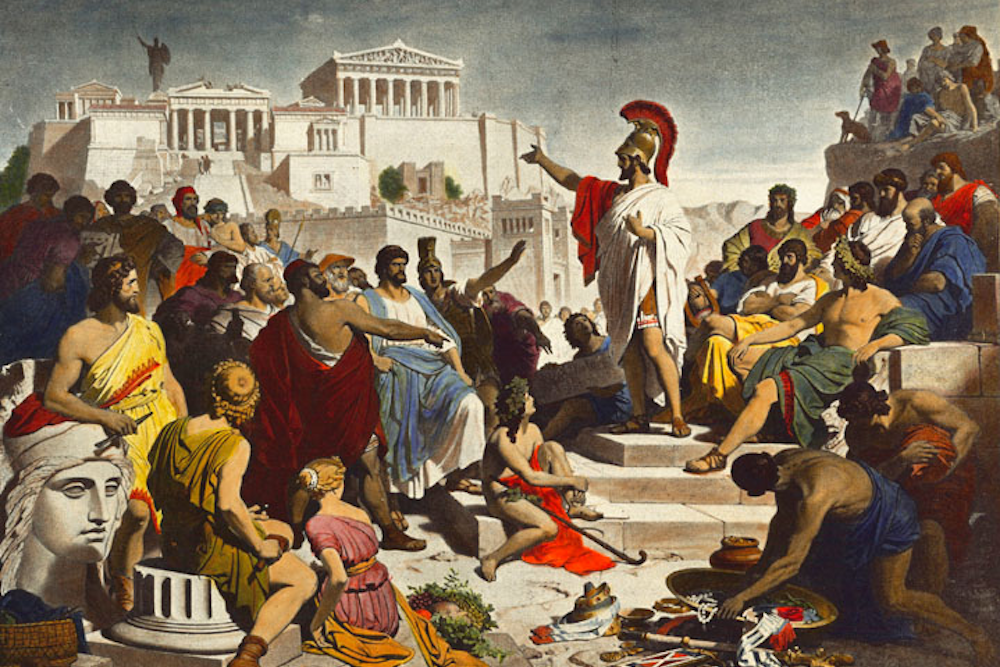 Of all the political words that trip off our tongues yet bedevil understanding, one of the most important is “democracy.”

Strictly translated, it signifies authoritative power (kratos) by the citizenry or people (demos)—particularly the lower and middle classes—in the public affairs of a political order. Of course, this does not describe our reality.

We Americans live in a republic, whose laws are made by public officials in whom citizens invest power and authority, legitimating their power over the citizens who are governed. Citizens vote for their representatives, but there is often little relation between what citizens vote for and what their representatives do. Thus, President Lyndon B. Johnson campaigned on a peace platform in 1964; George W. Bush voted to keep America out of foreign entanglements in 2000; Donald Trump campaigned as (inter alia) a champion of the working man who would restore America’s infrastructure. The First Amendment grants citizens freedom of speech and religion, but those rights are extended only as far as is accepted by agents of the three branches of government. White supremacists can demonstrate in Charlottesville and the University of Virginia, but protesters at the Republican National Convention are put in pens far from the convention hall.

When today’s public officials refer to the American state as a democracy, they often do so to make themselves look good, not to be truthful. For few actually advocate programs that politically empower the people, and they often disregard the preferences of citizens. Polls show that a majority of citizens favor stricter regulations of guns and polluters; higher taxes on the wealthy; a relatively tolerant immigration policy; liberal views on “social issues”; and health care for all. Yet the Congress does not adhere to these public opinions—and I don’t think it’s because they’re smarter or more virtuous.

But the trouble with democracy transcends contradictions between words and deeds or citizens and their representatives. A fog blurs the meaning of democracy, especially when it is invoked to describe our political order. But that fog reveals a real question—is democracy a beneficial political order or merely a linguistic honey?

In my scholarship, I have found that confusion about democracy stems from the misunderstood and opaque relationship between democracy and ideas of goodness, especially goodness as it relates to common and public affairs. This misunderstanding is particularly disturbing in the midst of democracy’s invocation today: Few citizens understand democracy’s ability, practically or ethically, to improve our social lives, and few politicians genuinely want to.

Practical roots of this misunderstanding recur to the American founding. The drafters of the American Constitution did not intend to create a democracy—thus, the Electoral College and the Senate (although having two houses of Congress can have democratic benefits). To the contrary, they secured a republic that would regulate American democracy and protect slavery not only because of racism but also because they didn’t trust ordinary citizens with political power.

As the nation extended suffrage and abolished slavery and segregation, the political question became how democratic should the republic become. Americans may wonder whether greater democracy is even desirable, since few in the echelons of society that dominate public communications and our capitalist economy are prone to entrust more power to the many who are often seen as uncouth—incapable of political judgment and likely to threaten their positions.

Besides this historical truth, political action in democracies and all other political orders occurs amid conditions of uncertainty. When citizens engage political dilemmas, they have reason to wonder exactly what the two conceptual pillars of democracy—freedom and equality— mean. What is political freedom for, if not anything should be allowed to “go”? How are we to put political equality into practice, if we do not seek sameness? This critique puts a moral and intellectual burden on the understanding and practice of democratic citizenship and governance: How can one be sure that becoming more democratic means that society and its citizenry will become better?

These questions of how and whether democracy produces goodness are serious and longstanding. Demokratia connoted the power of “the many” over “the few,” and noteworthy political theorists have argued that “the many” are more trustworthy political judges than “the few.” But neither is automatically good. Since its inception, democratic activity has needed ethical compasses to enable citizens who make decisions to do so beneficially, for the public as a whole. But there is no single intellectual or practical source for these compasses. Citizens may believe in God or think reasonably, but there is no God or Reason or website or algorithm that identifies the needs of democracy.

And that’s the point. We are not born with these virtues and practical skills. And yet everyone can learn the basic skills of political navigation, given the requisite general education and political experience.

This is why democracy can’t be only an ideal; it must be a practice of ongoing political activity wherever possible and practical to acquire this education and experience. When citizens’ political participation exclusively involves voting in official elections, it is reduced to being an adjunct to the agendas of the few individuals who both seek public office and have the wherewithal to be serious candidates. What I call the “political activity” of citizenship does not entail “activism” for all citizens, but it does require constant attention to the well-being of democracy. Every instance of democratic (not Democratic) opposition to republican (not Republican) rule needs to justify not only greater kratos for the demos but also political movement in a beneficial direction that reaches out persuasively to opponents. Every time women or subordinate races are mistreated as such, everyone should speak out on their behalf.

Citizens also need to explain to themselves and others why a political decision in a democratic society is good for the people. This calls for a kind of reconciliation between democracy and goodness that is hard to achieve. We must ask: How can democracy not only be an agent of power but also of goodness? And how can ethics, power, and knowledge operate practically in a way that benefit, rather than subvert, democracy? Without a democratic ethics, democracies will be run by factious majorities only interested in their own power. And with a democratic ethics that lose touch with actual citizens, a political elite may enact a morality that harms minorities or even the majority of those citizens.

When today’s public officials refer to the American state as a democracy, they often do so to make themselves look good, not to be truthful. For few actually advocate programs that politically empower the people, and they often disregard the preferences of citizens.

Over the course of history in “the West” there have been various watchwords of goodness in democratic contexts that can be instructive. I have found five such watchwords that express ethical standards that complement democracy, although their benefits are no more automatic than democracy itself.

The first is “virtue,” used as a standard of political excellence. Today, it is hard to understand virtue in general, but we can identify unusual efforts to excel in honoring and promoting the well-being of the public realm—profiles in political courage. Among individuals, Abraham Lincoln, Jane Addams, Margaret Sanger, Franklin Delano Roosevelt, Fannie Lou Hamer, and Martin Luther King Jr., strike me as good candidates. But note that each of these examples stand on the shoulders of hundreds of thousands of ordinary citizens that energized them.

A second notion that must complement contemporary democratic ethics is “representation.” This term became politically salient in the 17th and 18th centuries as secular states sought legitimation by reaching out to non-aristocratic and even (at times) non-property-holding men. We cannot do without representation today, as it is needed to link large numbers of citizens to modern political power. It can be done well by promoting dialogue between leaders and those they lead. But it also can be a tool for consolidating rule by a political elite over the majority of citizens.

Third, there is a sense of “civil rightness,” a neologism I have coined to refer to equal opportunity plus merit. “Civil rightness” is the achievement of goodness in civil society. It became the economic hallmark for equality amid the competition that marks job-seeking in modern societies. It can be used to open doors, when equality is extended to relatively powerless people and practices in civil society, or to close doors, when notions of merit are practically used to block access by the meritorious but unconventional. That said, it cannot be ignored in contemporary societies if they would be both democratic and good.

A fourth guidepost for complementing democracy and goodness today is “legitimacy.” Previously used to define rightful heirs in powerful families, including royalty, it has become more widely used in public discourse since the beginning of the 20th century, when and where no one ethical standard for a non-theocratic collectivity and government was accepted by citizens.

The final watchword for reconciling democracy and goodness today is “human rights.” In official international discourse, it is a kind of goodness that automatically complements the democratic character of modern states. It has risen in importance since the end of the Cold War, and human rights organizations do good work when they shine light on the horrible, politically caused suffering of human beings. But even attachment to human rights can become undemocratic when focus on their abuse distracts attention from a society’s common political needs.

The goodness of democracy also requires cooperation—so that winners and losers in political contests keep playing with and against each other in the same “game” of promoting the public interest (as each sees it) in society. Democratic citizens, therefore, need to reach beyond themselves when acting politically, lest power become the only name of the game. Only if citizens learn productive arts of cooperation amid the slings and arrows of fortune can democracy become good. That is not easy amid the obstacles generated by society’s dominant powers. But it is a task that everyone can accomplish. Undertaking it suits us to cast futures that are both democratic and beneficial for our mortal selves and endangered planet.