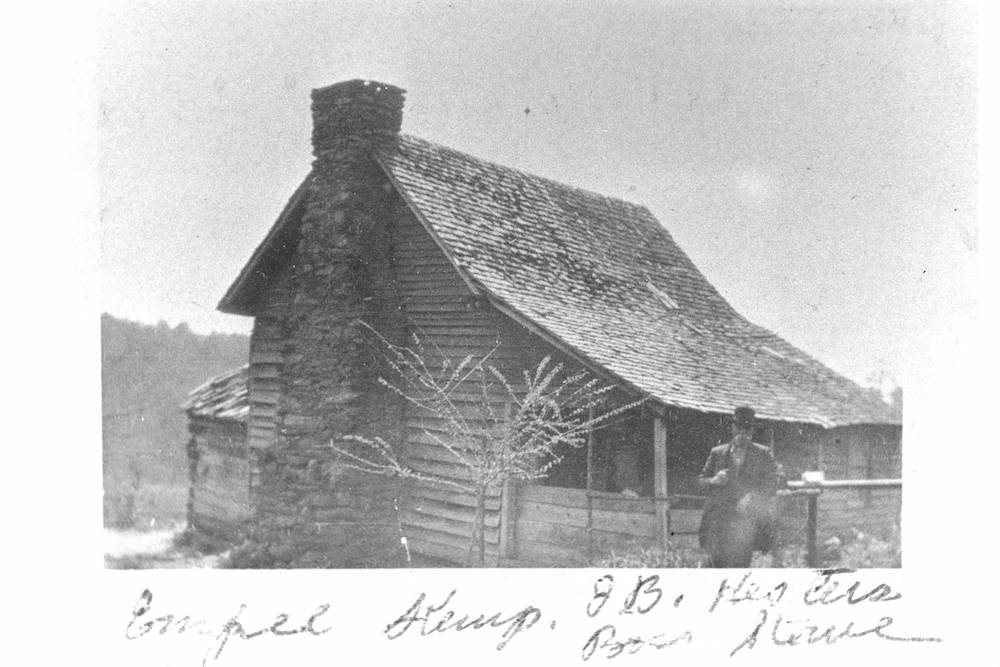 Beneath the brush on the sloping hillside facing the Blue Ridge Mountains in upper Pickens County, South Carolina, lay a hand-carved soapstone tombstone bearing a simple inscription: Chanie Kimp/Died/Aug. 6, 1884/Age 60 ye. Near that grave is another, marked by a white metal funeral home marker, with a barely legible card: James Kemp/Died July 19, 1938. These graves and dozens of others like them, just rediscovered in 2007, lie in the old cemetery of Soapstone Baptist Church, founded by newly freed blacks in the Appalachian region of upper South Carolina after the Civil War, in a region that became known as Liberia.

It may seem odd to talk about African Americans with Appalachian roots. Many Americans perceive the mountain regions as a “white space,” populated primarily by the Scots-Irish or German immigrants who exterminated or removed most of the Native Americans who had lived there originally. These whites are viewed as farmers with small landholdings who generally did not support slavery or own enslaved persons, in contrast to the British-descended plantation owners along the Atlantic coast enslaving hundreds per plantation. Scholarly research has shown, however, that thousands of African Americans were enslaved in the mountain counties of the Appalachians prior to 1865, working small farms, operating mills and smithies, and generally enhancing the capital of their white owners and those who profited from their labor. After emancipation, most of these newly freed blacks remained near their mountain homes and founded “freedom colonies” like Liberia. They stayed because they knew how to farm the land and they hoped that separated family members might return to the area to find them.

In these communities, African Americans were free from the controlling gaze and restrictive laws of their former masters; they could speak their minds, practice their traditions, educate their children, and worship God in their own way. But we don’t often hear their stories because black descendants lacked the resources to document their family stories and white historians often downplayed, ignored, or remained unaware of the existence of these places and their histories. Liberia’s story is a case in point.

Typically, freedom colonies were separate from white residential areas, situated on land given to formerly enslaved people, traded for their labor, or sold to them outright. By 1865, the area called Liberia, located in the Blue Ridge foothills of upper South Carolina, had a school and a church, Soapstone Baptist. Other than these structures, the “community” of Liberia (like many others in the mountains) consisted of an unincorporated area of family farms scattered across two counties, connected by social interactions between neighbors and friends. Expanding into several hundreds of people during Reconstruction, the community slowly began to fade under Jim Crow restrictions and due to better economic opportunities elsewhere. By the Depression, most black residents had abandoned their farms of cotton and corn for a better life. Today, only a few members of one black extended family live within walking distance of Soapstone Baptist Church; they either are retired or employed in the area’s surrounding cities, just like their rural white neighbors.

Through omission or misrepresentation, local white historians typically have portrayed black enclaves like Liberia either as relatively recent arrivals to traditional white spaces or as collaborators in their own oppression. For example, one local white-authored history described Liberia’s residents as living in “congenial cooperation” with their rural white neighbors. As Liberia’s oral history documents, frequently this has not been true.

For example, according to a family will, on September 4, 1844, Alfred Hester, the owner of an enslaved woman named Chanie, bequeathed her and her child Emerson to Hester’s son, James. Fighting for the Confederacy in the War Between the States, James Hester left his Pickens County farm in the care of his enslaved overseer, Emerson. After freedom, Emerson took the name “Camp” (later Kemp), registered to vote, married, and moved into the Liberia community, along with his mother and hundreds of other freed people.

The founder of Soapstone Baptist Church had been enslaved as well. Joseph McJunkin (his descendants told) was originally from Georgia but was carried to River Falls, a plantation deep in the Blue Ridge coves of present-day Greenville County. While Joseph’s half-brother John killed his enslavers and fled to Ohio, Joseph was sold to a white woman who also may have been his lover. After the Civil War, Joseph took the surname McJunkin, acquired land in upper Greenville County, raised a family and founded several churches. Despite legal challenges to their property boundaries by an expensive gated community, McJunkin’s descendants still own land in the area.

Joseph McJunkin’s granddaughter Lula married a Liberia resident named Chris Owens, and the couple became well-known Liberia residents. The couple were forced to defend their community multiple times. For example, when Liberia’s one-room schoolhouse closed in 1953 due to statewide consolidation of isolated country schools into better-equipped and more substantial (but still segregated) buildings, Lula McJunkin Owens was told by the county school superintendent, who was white, that he had no intention of sending a school bus up to Liberia to transport the few remaining black children to school in the nearby towns of Pickens and Easley. The granddaughter of former slaves was told that the black children needed no further education, and instead she should just put them to work on the farm. Outraged, Owens demanded a bus, threatening to contact state officials if necessary. She prevailed.

In April 1967, on the evening Lula Owens celebrated her 71st birthday, the wooden Soapstone Baptist Church and a neighboring black-owned home burned to the ground. According to local newspapers, the State Law Enforcement Division (SLED) suspected arson, and eyewitnesses reported that a message from the Ku Klux Klan had been written in the dust of the parking lot. Still, there is no record of any investigation by SLED; most white neighbors do not remember the incident at all. Almost immediately afterward, Lula Owens led a rebuilding campaign, supported by black and white residents, and the new Soapstone Baptist Church continues to meet.

Through omission or misrepresentation, local white historians typically have portrayed black enclaves like Liberia either as relatively recent arrivals to traditional white spaces, or as collaborators in their own oppression.

One of the best-known residents of the Liberia area was the first known matriarch of the Owens family, an enslaved woman named Katie, owned by several local white families before 1865. After her emancipation, “Aunt” Katie moved to the Liberia area and gained regional recognition among her black and white neighbors for being a midwife, cook, and seamstress; she also farmed her own land. Owens became so well-known that local newspapers twice wrote about her, in a profile from 1927 and in her obituary a year later.

But these stories, too, are filtered through a white lens of paternalism and obfuscation due to the Jim Crow era. Owens’s obituary noted that she “made her home with some of the best families before the ’60s,” but the truth was that she “made her home” with these families because she had no choice—she was their property. Soon after the war she married, her obituary continues, “and to her were born three children.” Although Katie Owens was married at the time, the writer obscured the parentage. According to Owens family history, the father/fathers of Katie’s children was/were white, and the relationship/s had not been consensual. “That’s why you see our color,” one lighter-complexioned Owens descendant joked.

Today, while descendants of Liberia’s founders live in widely scattered places, only a few members of the Owens family still live within walking distance of Soapstone Baptist Church. While residents recognize a significant decrease in racial tension between today’s South Carolina and decades past, a few lingering issues remain, as they do in the United States in general. For this reason and others, it is critical to document stories about places like Liberia and to demonstrate the resolve and resiliency of black residents through centuries of enslavement, inequality, segregation, and racism. Today, the matriarch of the Owens family works with white and black community members to preserve Liberia’s history. Her work brings a crucial black perspective to the local white narrative and an important contribution to the history of the state and nation.