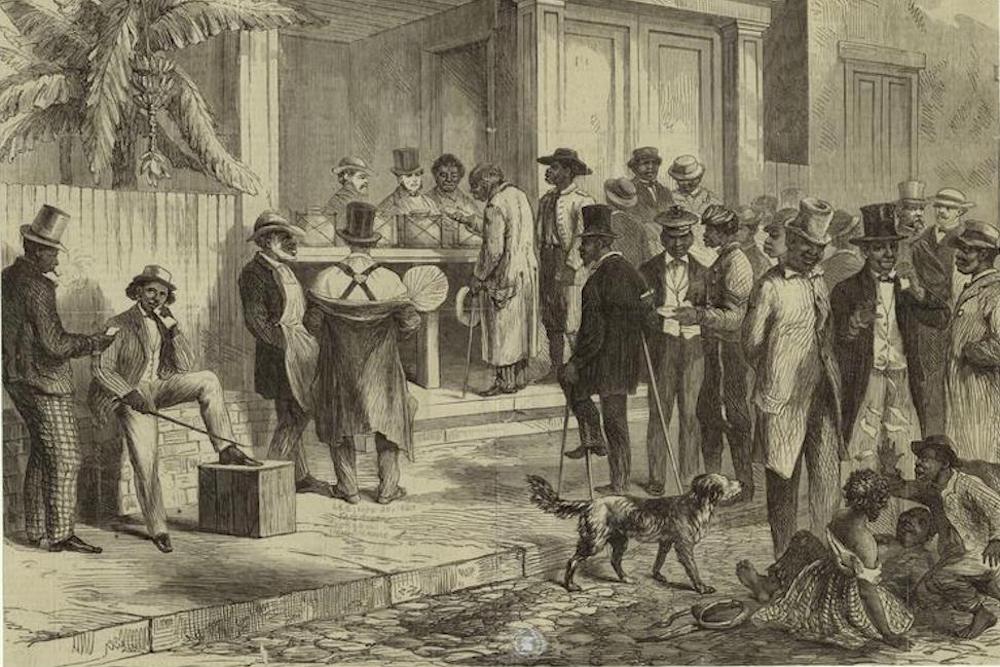 The more that efforts to suppress voting rights in America change, the more they remain the same.

From the earliest days of the republic to the present, politicians have sought to limit the ability of non-whites to vote. What has changed is the nature of suppression—either the addition of regulations, or the deregulation of parts of the process—as well as the degree to which would-be vote suppressors reveal their intentions.

The American problem with voter suppression started with a void in the original Constitution, which did not include a right to vote. This omission allowed states to suppress the votes of non-whites by various means.

In the antebellum period, the pattern of suppression was deregulatory and explicit, as Americans pursued the ideal of a “white man’s republic.” States expanded the franchise for white males by eliminating property and tax-paying qualifications for voting, while at the same time explicitly excluding women, Native Americans, and African Americans.

In 1800, only five of 16 states mandated white-only voting. By 1860, 28 of 33 states, comprising about 97 percent of the nation’s free black population, had adopted such racially restrictive suffrage. In 1860, no state imposed property qualifications for voting and only a half-dozen had tax-paying requirements. As the winners in this new political order, white men shaped the nation’s laws and policies without regard to women or minorities.

This shift in voting rights did not occur without challenge. In Pennsylvania, in 1835, William Fogg, an African American whom election officials had turned away from the polls, filed America’s first voting rights lawsuit.

In the suit, Fogg v. Hobbs, he charged that election officials had violated the state’s color-blind constitution—“all men are born equally free and independent”—by barring him from voting just because he looked black. Fogg contended that he qualified as a legal voter under Article III, Section I of the Pennsylvania Constitution of 1790, which granted voting rights irrespective of race to “every freeman of the age of twenty-one years, having resided in the State two years next before the election, and within that time paid a State or county tax.”

Fogg won his case in a lower court, but the Pennsylvania Supreme Court upheld the state’s appeal in 1837 by writing black people out of American democracy. The court ignored the state constitution and found that “no coloured race was party to our social compact,” and that there was no basis on which “to raise this depressed race to the level of the white one.”

The court did hold out hope for future generations, albeit in a perverse way, by noting that a black man’s “blood, however, may become so diluted in successive descents to lose its distinctive character; and, then, both policy and justice require that previous disabilities should cease.”

This idea of excluding blacks from the “social compact” reemerged when Pennsylvania adopted a new constitution in a convention that began on May 2, 1837, and lasted until February of the following year. This 10-month deliberation took three times longer than the convention that drafted the nation’s constitution in Philadelphia in 1789, and its delegates played on the common prejudice that African Americans lacked the moral and mental fitness needed for suffrage. They charged that unscrupulous men of wealth would buy the black vote and corrupt elections with voter fraud. They raised the specter of blacks flooding into states not just to vote, but also to hold public office. A whites-only suffrage, they argued, would preserve the integrity, independence, and virtue of the vote.

Delegate Benjamin Martin, a Democrat from Philadelphia County, spoke for the majority at the Pennsylvania convention when he said, “It is altogether futile and useless to pursue the experiment of making the African and Indian equal to the white citizen.” Perhaps thinking about the Fogg suit, Martin continued that voting rights would ill-serve blacks, because an aroused public would turn them away from the polls, thus “holding out expectations to them which could never be realized.” He warned of attracting African Americans to the state. Look to Philadelphia, he said, where blacks congregate “from all the southern States, and have so corrupted each other, that they are now in a situation far worse than the bondage from which they have escaped. It is impossible to walk through Cedar ward, in a clear warm evening, for the black population.”

In 1800, only five of 16 states mandated white-only voting. By 1860, 28 of 33 states, comprising about 97 percent of the nation’s free black population, had adopted such racially restrictive suffrage.

African Americans countered such claims and protested “white-only” suffrage by issuing “The Appeal of Forty Thousand Citizens Threatened with Disenfranchisement to the People of Pennsylvania.” The appeal asked why the new state constitution denied “that all men are born equally free by making political rights depend on the skin in which a man is born? Or to divide what our fathers bled to unite, to wit, TAXATION and REPRESENTATION.”

Such appeals proved unavailing in Pennsylvania and across America. Without a guarantee of the vote in the U.S. Constitution or any federal voting rights laws, the disenfranchised black people of Pennsylvania and other states had no recourse to any authority higher than their discriminatory state constitutions and hostile state courts.

This represented a serious retreat for the country. In the 18th century, African Americans who met other qualifications could vote in most states of the new republic. But by the mid-19th century, those suffrage rights had been lost.

The Civil War changed that. After the war, African American men regained the right to vote—only to lose those rights within decades, after Reconstruction. The Fifteenth Amendment did pass in 1870, but it did not explicitly grant voting rights to minorities, it only prohibited the states from denying the right to vote based on race, color, or condition of previous servitude. After Reconstruction, states evaded the Amendment with seemingly race-neutral laws such as literacy tests and poll taxes.

It would not be until 1965 that African Americans and other racial minorities regained the vote with the passage of the Voting Rights Act.

But in the 2010s, our current decade, the U.S. Supreme Court overturned a piece of the Voting Rights Act. And struggles for full access to the ballot continue, with states restricting voting opportunities through measures such as photo voter ID laws, voter purges, felon disenfranchisement, polling place closings, and gerrymandered legislative districts. Although the players and the issues in voting rights may change over time, today’s arguments would seem familiar to those involved in the antebellum fights over voting. And the stakes are very much the same: Who has the right to vote in America and who benefits from exclusion?