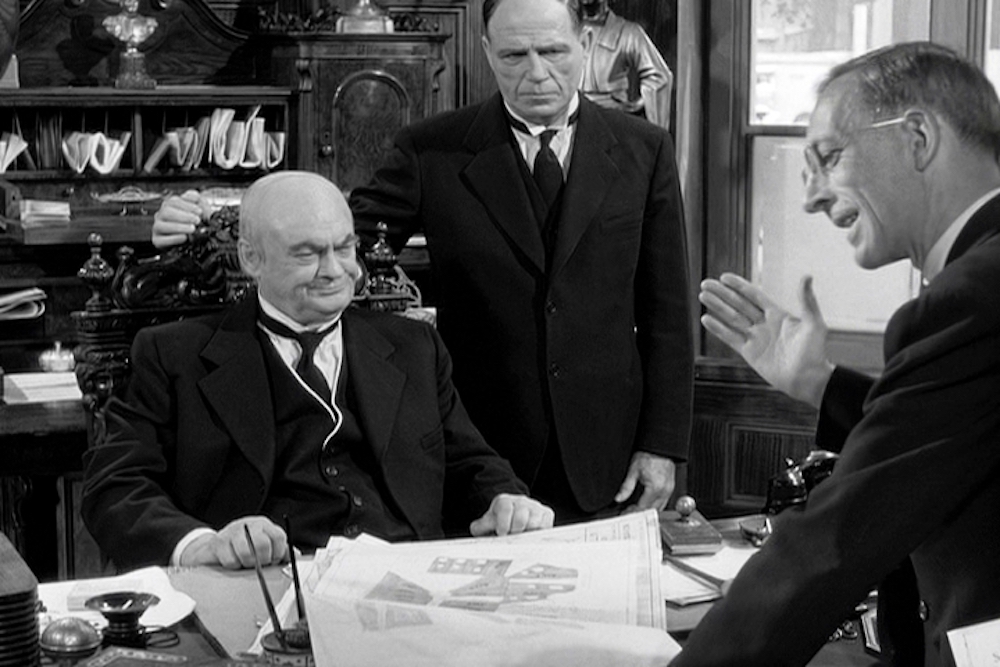 The bank run scene in It’s a Wonderful Life always makes me cry real tears. If you care about America, you should love the scene too—and not just because it is a brilliant piece of cinematic storytelling.

The scene unfolds as George Bailey, played by Jimmy Stewart, sets off on his honeymoon in a taxicab, only to realize that depositors have gathered outside a local bank, demanding their money. Instead of continuing on his honeymoon, George hustles to his beloved Bailey Building and Loan, where he finds it closed and hence in mortal peril.

The ensuing scene encapsulates the promise of the American financial system. And it explains why, in the first half of the 20th century, policymakers encouraged the development of institutions and markets powerful enough to make—or break—the lives of all Americans.

Of course, the scene also dramatizes the financial conflict between protagonist George Bailey and antagonist Henry F. Potter, played by Lionel Barrymore. After George lets his distraught depositor-investors in and the Building and Loan opens for business, he learns that Potter recently acquired the town’s other bank and then ordered the immediate repayment of funds it had loaned to his Building and Loan, thus denuding the mortgage lender of all its cash.

That premise would have been plausible and familiar to viewers of the movie because, in that era, financial intermediaries often made short-term loans to each other that stipulated repayment upon demand. The subtext, revealed in this and a previous scene, is that the Bailey Building and Loan needed to borrow from the bank because some of its own borrowers were in distress and not making payments.

And so, in this scene, you can see how community connections governed this era in the American economy. Rather than foreclose on his borrowers, evict them, and sell their properties, George Bailey, like other community bankers, allowed delinquent borrowers time to get back on their feet. Banks, in that time, saw themselves as vital to keeping their communities functioning.

But that complicated interdependence also made such small banks—and the communities they served—vulnerable. And it was during the bank run that Potter, Bailey’s rival, tries to take advantage—and take over Bailey’s Building and Loan. Then, Potter telephones to offer George his backhanded assistance. He says that if George doesn’t sell the Building and Loan to him on the cheap, like the other bank just did, he’ll have to dispatch the police to prevent the “mob” from doing bodily harm to George and his employees, who also are his relatives. Without his aid, Potter warns, the Building and Loan will go bankrupt before the official close of business at six that evening.

George hangs up and attempts to talk his way out of the jam and convince his depositors not to withdraw their funds. He asserts that this particular day’s economic crisis, one of the several waves of bank failures that swept the nation during the Great Depression, “isn’t as black as it appears.”

George doesn’t do well at first. When one customer, Tom, demands repayment of the $242 he invested in the institution, George correctly explains to him that building and loans are not commercial banks and that Tom owns time deposit-like shares in the institution payable in 60 days, not a checking deposit payable on demand. Despite George’s heartfelt, and accurate, reminder that the Building and Loan’s assets consist of long-term loans to his neighbors, Tom insists on getting his money, implying that something must be wrong if the institution cannot pay out a mere $242.

Another man, Randall, then enters the bank and tells the crowd that they can sell their shares in the Building and Loan to Potter for 50 cents on the dollar, cash. Tom immediately threatens to sell his shares to Potter because “it’s better to get half than nothing.” As the crowd starts to head for the door, George vaults the counter and blocks their path while plausibly explaining that if enough of the Building and Loan’s investors sell out, Potter will gain control of the institution and monopolize the town’s financial system and housing market, which will allow him to raise borrowing costs and rents to oppressive levels.

But Bailey keeps arguing. And he draws upon an intimate knowledge of his investors and borrowers of the sort that good community bankers had in small towns. Over the course of the day, George draws out the implications of Potter’s control in personal, detailed terms, which stops the crowd long enough for him to expose Potter’s intent: The old codger is buying shares, not selling them, because he is using the financial crisis to get rich at the expense of the poorer and presumably less astute and informed townsfolk.

The crowd ultimately agrees with George’s assessment. Americans in that era were bitterly opposed to monopoly. But inside the Building and Loan, the atmosphere remains thick with panic because Bailey’s depositors need cash to feed their kids, pay medical bills, and hold them over until a family member can find employment once again.

That’s when George’s new bride, Mary, played by Donna Reed, steps up with $2,000 in honeymoon money that her husband begins to lend out, starting with $242 for the recalcitrant Tom. The next two customers, however, request only $20 each. And it’s clear that George will survive the bank run when Mrs. Davis asks for only $17.50.

The scene ends with the Building and Loan still open—but with just $2 left at the close of the business day. That is enough not to be bankrupt, and to seek new financing. There is more work to recover, which viewers never see.

To remain prosperous, America needs a robust, innovative financial system. But our existing system relies too much on the good luck of having a good guy in a community (like George Bailey) or a bigger bank (like the Federal Reserve) to thwart the inevitable bad guys.

What the Capra film doesn’t say is that if the Federal Reserve System (“the Fed”) had been doing its job, it would have lent funds to the local commercial bank (or its correspondent bank in Manhattan) that in turn would have aided the Bailey Building and Loan. With Fed support, the Bedford Falls bank could have remained independent of Potter and had no reason to demand immediate payment of its callable loan to George’s institution.

The Federal Reserve was created in 1913 in part to act as a lender of last resort, making emergency loans to troubled but solvent banks during crises. It failed to do so during the Great Depression, greatly exacerbating the misery. (And for some viewers of the film when it first came out, the Fed’s failure to act may have been a bitter memory.)

At other points in American history, including during the Great Recession, the federal government and its central bank have gone too far in the other direction, bailing out bankrupt institutions that took on too much risk and should have been liquidated in an orderly fashion instead. Some Fed policies, most notoriously the “Too Big to Fail” doctrine, have actually increased the likelihood of financial crisis.

Still, the film scene is powerful in illustrating a point that I, as a political economist, have been trying to establish since my pitiable career began a quarter-century ago: To remain prosperous, America needs a robust, innovative financial system. But our existing system relies too much on the good luck of having a good guy in a community (like George Bailey) or a bigger bank (like the Federal Reserve) to thwart the inevitable bad guys who happily hurt others and cause a financial crisis in order to “make a bar” (Wall Street slang for a million dollars). Crises like the one in the film stem from the structure of incentives, institutional and individual, and hence that is where regulators should concentrate their efforts.

Only rarely have Americans, and their regulators, considered carefully the importance of incentive structures not only to financial institutions but also to the communities in which we live and work. But in It’s a Wonderful Life, we can see exactly how those incentive structures fail the people we love.

To be an American is to live with the cultural, economic, and political scars from numerous financial crises and the recessions, depressions, and often half-baked economic policies and regulations that they spawned. It’s also American to tremble with the certainty that more financial storms loom on the horizon.

Financial panics shape far more than our finances. Nobody much cares about the Panic of 1792 anymore because it seems so remote. But they should, because it helped to create America’s two-party political system.

Every major financial panic, in fact, led to titanic shifts in the American story, from the rise of Jacksonian democracy to the Civil War to the formation of the Fed itself. Although the events depicted in It’s a Wonderful Life took place during the Great Depression, which began almost 90 years ago, we live, and in some cases die, with the myriad policy decisions made in response to that epic economic downturn. So when you watch the bank run scene this holiday season, feel free to blubber away with me. It’s good to grieve.