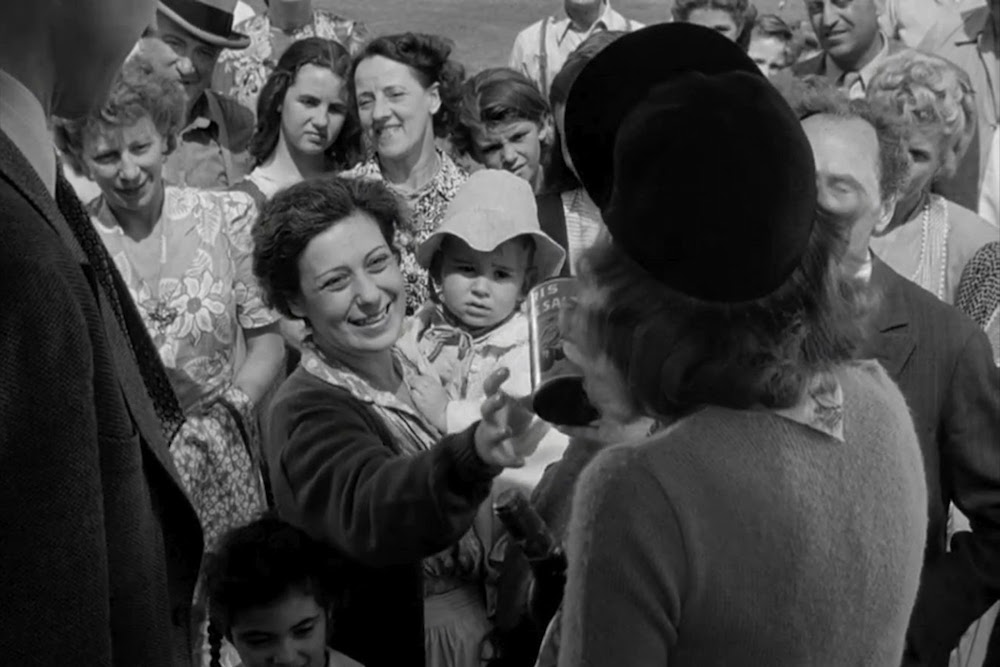 As the Italian-American Martini family moves into their new house in Bailey Park, with all of their children and a pet goat, Mary Bailey presents them with salt, and the wish that "life may always have flavor." Mr. Martini was played by the actor William Edmunds, who was born in Italy with the name Michele Frondino Pellegrino. Courtesy of the Bedford Falls Sentinel.

Frank Capra, the director of It’s a Wonderful Life, called the film his favorite, and even screened it for his own family every holiday season. The movie hit close to home in another way: Capra was attempting to represent the story of Italian-Americans like himself, who had a complicated path toward assimilation during the first half of the twentieth century.

Francesco Capra was born in 1897 in Bisaquino, near Palermo, Sicily, the youngest of seven children. (“Capra” means goat in Italian; the town’s name is derived from the Arabic “rich in waters.”) In 1903—at the height of Italian emigration—the family booked passage for America. Millions of Italians from the Mezzogiorno (the south) emigrated just one generation after the unification of Italy in 1861. The mass migration was seen as an indictment against the way that unification was carried out as well as the increasingly desperate plight of the laboring poor in Italy.

Conditions in steerage on the steamship Germania were miserable, an experience Capra never forgot. As he explained to film historian Joseph McBride:

You’re all together—you have no privacy. You have a cot. Very few people have trunks or anything that takes up space. They have just what they can carry in their hands or in a bag. Nobody takes their clothes off. There’s no ventilation, and it stinks like hell. They’re all miserable. It’s the most degrading place you could ever be.

But as the ship passed through New York Harbor, Capra’s father admonished his son, age 6, in what could have been a scene from one of his later movies: “Ciccio, look! Look at that! That’s the greatest light since the star of Bethlehem! That’s the light of freedom! Remember that!”

It seems Capra internalized that idealistic message during his life and advanced it in his films. Capra was never one to wax nostalgic about his Italian ethnicity. Indeed, he often insisted that he was American, without any hyphen and without deep ties to Italy. That ferocious desire to become American, and erase what may have been (for Capra) an embarrassing past, came to fruition in his film work. Even with relatively positive images of Italian-Americans, as in It’s a Wonderful Life, Capra absorbed ambivalent stereotypes about Italian migrants from his adopted country, and conveyed them in his films.

As the film opens, we catch a glimpse of Martini’s, the restaurant and bar belonging to Giuseppe Martini, played by the actor William Edmunds, whose stage name was an erasure of Michele Pellegrino, born in Basilicata, Italy in 1886 and arrived in New York City in 1897. As film scholar Giuliana Muscio notes in her new magisterial study Napoli/New York/Hollywood: Film Between Italy and the United States, many Italian actors in Hollywood anglicized their names in order to secure work. Ironically, they rarely played Italians on screen and were often cast as other ethnics. Conversely, Italian characters were often portrayed by non-Italian actors.

Immigration scholars have long debated whether immigrant Italians were denied the privileges of whiteness or were considered “white on arrival.” Beyond dispute is the fact that Italians were not welcomed by earlier immigrants such as the Irish.

The pressure to assimilate was ferocious. Social workers made the rounds of Italian communities urging parents to send their children to school (where their names were often changed) and to eat oatmeal rather than Italian food for breakfast. During World War II, government posters admonished Italians in America not to “speak the enemy’s language!” even as Capra was making the film series Why We Fight for U.S. Army chief of staff George Marshall. As late as the 1950s, Mario Cuomo was urged to change his name after graduating top of his class in law school, unable to land a position at a white-shoe law firm.

Even with relatively positive images of Italian-Americans, as in It’s a Wonderful Life, Capra absorbed ambivalent stereotypes about Italian migrants from his adopted country, and conveyed them in his films.

The saga of the Martini family in the film partially reflects this historical reality. Giuseppe Martini is the classical, striving immigrant, desperately yearning to advance the material prospects of his family. With a loan from the Bailey Savings & Loan Company, he secures a coveted home in Bailey Park, thus acquiring a part of the American Dream. As the family prepares for the move out of the Potter slum, Mr. Martini triumphantly announces to a neighbor that he will no longer rent but be the proud owner of his own home.

George and Mary Bailey are on hand to assist with the move. George packs the numerous Martini children into his car—with the requisite goat—and off they go, with Martini singing that universal marker of Italianess, “O Sole Mio.” Martini’s accent, gestures, and prodigious brood (human and animal), are all signifiers of Capra’s internalized image of how Italian-Americans were seen through the lens of American popular culture. On the steps of their new home, Mary Bailey presents Mrs. Martini with bread “that this house may never know hunger” and salt “that life may always have flavor.” Then George presents Mr. Martini with wine “that joy and prosperity may reign forever. Enter the Martini castle!” as Mr. Martini makes the sign of the cross.

Later in the film, George Bailey is drowning his sorrows at Martini’s bar as “Voglio cantare una canzone d’amore” plays on the jukebox. Martini asks, “Why you drinka so mucha my friend?” When Bailey is assaulted by a boorish patron, Mr. Martini is swift in throwing out the offending man for breaking the code of friendship, insisting “He no come ina my place no more!” (Martini, like many immigrants, is marked by—among other things, such as the goat—his broken English.)

All this was part of a larger history. An earlier migration of Italians from northern Italy, including Filippo Mazzei (friend of Thomas Jefferson) and Lorenzo Da Ponte (Mozart’s librettist and first professor of Italian at Columbia University), had convinced political and immigration authorities that the later-arriving southern Italians were of lesser status.

Northern Italians were descendants of Dante, Galileo, Leonardo Da Vinci, and Michelangelo. But Neapolitans and Sicilians, who comprised a majority of migrants between 1880 and 1924, were considered barbarians, racially and intellectually inferior. Around 1900, as Italians were disembarking at Ellis Island and New Orleans by the millions, they were required to check off “Southern Italian” rather than “White” on entry forms and were portrayed in popular culture as rats carrying disease, licentiousness, and radical political ideas. Italian anarchists loomed in the imagination of Americans much as Islamic terrorists do today. If, during the trials of Sacco and Vanzetti (1920-27), one would postulate that there would eventually be not one but two Italian-Americans on the Supreme Court, it would be as if today someone suggested a Muslim for the same position.

That bigotry is present in the film. When George Bailey, in desperation after his business partner Uncle Billy loses an $8,000 deposit, begs Mr. Potter for a loan, the evil banker sneers at the idealist Bailey for being a “nursemaid to a bunch of garlic-eaters,” a not-so-subtle dig at Martini and all Italian-Americans. They had been called worse: dagoes, guineas, wops. Italian-Americans had been despised as gangsters and mobsters, and found hanging at the ends of ropes, lynched by the Ku Klux Klan for having the audacity to befriend African Americans, and posing a libidinal threat to the purity of virginal white American women, the dark side of the Latin lover stereotype.

As the townspeople arrive at the Bailey home with baskets of cash to bail out the Savings and Loan, Mr. Martini enters shouting, “I even busted the juke-a-box!” That jukebox, as Mark Rotella notes, would have included songs by Frank Sinatra, Dean Martin, Perry Como and—later—many other Italian-American singers such as Connie Francis and Bobby Darin. Mary Bailey calls out to Mr. Martini, “How about some wine?” again, another marker of Italianess.

Capra’s depiction of the Martini family was simplistic and already out of date by the time of the film’s release in 1946. An extraordinary shift in America’s image of Italian-Americans took place during the middle third of the twentieth century. Public figures such as New York City Mayor Fiorello LaGuardia, Joe DiMaggio of the New York Yankees, and crooner Frank Sinatra (whose short film The House I Live In, espousing racial, religious and ethnic tolerance, won an Academy Award), were at the forefront in shaping new perceptions. In 1950, all three candidates for New York mayor were Italian-American. (Two were actually Italian-born). It also helped that Italian-Americans had been the largest ethnic minority serving in the armed forces during World War II.

Italian-Americans began leaving their ethnic conclaves across the country and moving to the suburbs. (See the ending of Mario Puzo’s The Fortunate Pilgrim, published in 1965). By 1946, the move to the suburbs was accompanied by a move rightward on the political spectrum among Italian-Americans. Why the political evolution? Perhaps it was anger at the Roosevelt Administration’s decision after Italy declared war on the U.S. to label 600,000 Italians who had never become American citizens as “enemy aliens” and intern several thousand in camps (before they were released on Columbus Day 1942 in anticipation of the presidential election). Perhaps it was an awareness that to fully be admitted to American society and enjoy its privileges, Italian-Americans had to embrace some of the darker aspects of American prejudice.

Italian-Americans felt they had proved their loyalty to America by renouncing Fascism (which many had supported in the 1920s and 1930s), and raising their children as “good Americans” only speaking English. Capra was emblematic of this evolution in real life, but the change isn’t reflected in this film—or any of his other films.

It seems both Capra and American popular culture preferred their Italians caught in amber, genial and warm-hearted but not too cerebral, or complicated.