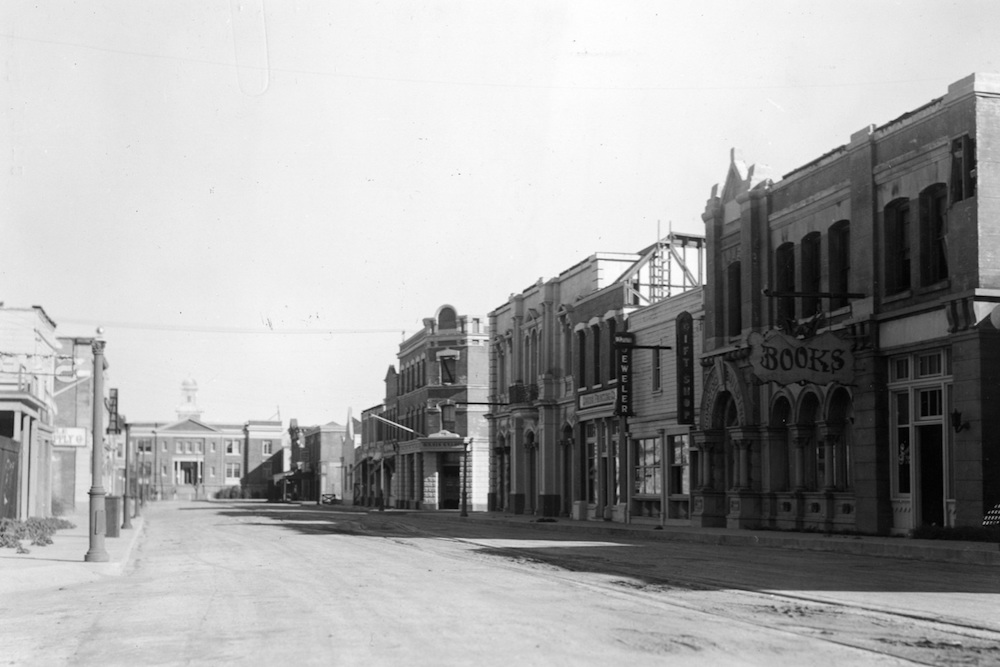 Though the set for Bedford Falls was built on a lot in California’s San Fernando Valley, it symbolized a mythical small-town America at a time when many lived in cities. Courtesy of Wikimedia Commons.

It’s a Wonderful Life can be read through multiple prisms—as a Christmas movie, a family movie, a love story, an existential journey, and a celebration of the everyman. But Frank Capra’s movie invites audiences to consider it, first and foremost, as a small-town film.

The first image seen is a sign welcoming audiences: “YOU ARE NOW IN BEDFORD FALLS.” Even if initial audiences don’t know anything about this specific town, they “know” the community they about to enter: the American small town.

While we think of the small town as a place, it is also very much a journey to a former time. And by 1946, the year of It’s a Wonderful Life’s release, the small town had become associated with a fading past more than the urbanizing present. To enter the small town was to enter through the gates of nostalgia.

A quarter of a century earlier, the 1920 Census Bureau had declared the ostensible death of the small town. For the first time in U.S. history, more people lived in urban than in rural spaces. In The Urban Nation: 1920-1960 (1968), historian George E. Mowry declared that the small town in 1920 was analogous to the U.S. frontier in 1890. One era had ended and a new era had begun: a small-town nation gave way to an “urban nation.”

But this transition came with a paradox. Although a growing majority of Americans were leaving historical small towns for urban areas, the small town was never really left behind. In 1923, a mere three years after the Census Bureau revealed the precipitous decline of material small towns, sociologist Thorstein Veblen—today famous for his critique of the leisure class and for coining the term “conspicuous consumption”—recognized the small town as one of the United States’ most important “institutions” in “shaping public sentiment” and in defining the nation’s “character.”

In the early twentieth century, the small town ceased to be primarily a geographic form, and instead, became more of an ideological form. More specifically, the small became a trope—as the nation’s sacred home, a trope exemplified by It’s a Wonderful Life.

After an extended close-up of the Bedford Falls’ welcome sign, “You Are Now In Bedford Falls,” the camera enters the small town at night as snow descends. Although the town’s public spaces are empty, we hear various small-town subjects in voiceover praying for the well-being of the movie’s protagonist, George Bailey (James Stewart). Even though the public square is closed for the night, the small town’s communal identity of care and goodwill never sleeps.

In the next scene, we learn that the small town’s prayers ascend to heaven, reinforcing the ideology that Bedford Falls—and the small town more generally—is a sacred community. In heaven, two angels fret over George Bailey’s growing despair. Rather than a space forgotten by modernity, the small town proves a space directly connected to heaven and a space for which heaven cares. The angels decide to send the wingless angel Clarence to Bedford Falls to assist the movie’s protagonist. After the angels tell Clarence of his mission, one angel asks what book Clarence is reading, to the which the latter responds, Mark Twain’s The Adventures of Tom Sawyer.

Through such textual references, the movie suggests that Bedford Falls is analogous to Tom Sawyer’s small town of St. Petersburg (modeled on Hannibal, Missouri), despite the 70 years (1876 to 1946) separating the two texts. This epitomizes how, in the 20th century, myriad, diverse, material small towns gave way to “the small town.”

It was possible to see the ideological power of the small town in the 1920 presidential campaign. Republican Warren Harding ran his campaign exclusively from his hometown of Marion, Ohio, which was staged and advertised as a “small town.” In the wake of World War I, the small-town setting was central to Harding’s message of the United States becoming an isolated and independent nation-state, delinked from international affairs. Harding’s small-town vision explicitly contrasted with the internationalism of Woodrow Wilson, who sought a “League of Nations,” an international community that would work collaboratively to prevent another world war. Although the small town may have been materially declining, the small town proved its political mettle. Harding won in a landslide.

It’s a Wonderful Life, in many ways, repeats Harding’s aesthetic, but 26 years later. Just as the candidate used a small-town setting to establish a more isolated, autonomous United States in the wake of a world war, so too did Frank Capra. The film’s director enlisted in World War II to make propaganda movies designed to win the hearts and minds of the American public; It’s a Wonderful Life was Capra’s first film after the war.

In the early 20th century, the small town ceased to be primarily a geographic form, and instead, became more of an ideological form. More specifically, the small became a trope—as the nation’s sacred home, as exemplified by It’s a Wonderful Life.

The invitation to enter Bedford Falls may seem like an invitation to leave the horrors of the present; to enter a space outside of modernity, like an American version of Brigadoon, the mysterious Scottish village of the famous 1947 Broadway musical. However, this small town is not a nostalgic place outside of time. Instead, it is a stage on which an alternative and accessible modernity unfolds, what can be called a “main-street modernity.” In this sense, the small town anchors a powerful form of U.S. exceptionalism.

Consider the nightmare sequence in which Bedford Falls loses its identity and becomes a city. The transformation of Bedford Falls into Pottersville is not just because of a growing population. Rather this geographic transformation is shown as a fall from grace. In Pottersville, the camera pans over signs in a hurried, frantic pace, representing the tempo of urban life: “Blue Moon,” a bowling alley that features “fights,” a hotel, a “Midnight Club Dancing,” “Bamboo Room Cocktails,” a pawn shop, a sign advertising “20 Gorgeous Girls,” “The Indian Club,” “Dime a Dance,” and more. Just as the sign “You Are Now In Bedford Falls” evokes community and togetherness, these urban signs show a fallen community, saturated in sin.

This is evident by the strip clubs that have proliferated and, moreover, by signs indicating that Bedford Falls is now home to African Americans. Many of these signs are racially coded, advertising a culture of fighting, late-night dancing, and invitations to “jitterbug,” activities that were then racially coded as black. In 1944, the federal government imposed a 30 percent tax against “dancing” night clubs (cabarets) and soon, “No Dancing Allowed” signs emerged throughout the nation. This was a sin tax that targeted what was perceived to be African American culture. High taxation on dance halls was an indirect way to keep spaces white and to prevent different races from mixing.

As the film suggests, geography is destiny—even if that geography is a U.S. fantasy. If Bedford Falls remained a small town, women such as Mary would be “safe” in marriages. However, the small town becoming a city results in the collapse of all traditional institutions and the unleashing of racial diversity and gender freedom, themes troped as threatening by the film.

The world of “Bedford Falls,” with its whiteness and its home-bound women, was very much a fantasy at the time the movie was made. It’s a Wonderful Life presents Bedford Falls as an island outside the dominant modernity of the country. Specifically, it ignores the Great Migration of six million African Americans from south to north—the largest internal migration in U.S. history. And it ignores the feminist revolution that had begun to unfold during World War II, when more than 350,000 women served in the U.S. Armed Forces and nearly one in four women worked outside the home. Yet It’s a Wonderful Life presents Bedford Falls as a place that erases all this history, and all its contemporary turmoil. The film’s female characters, for the most part, all work in the home, and the only African American in the movie is a housekeeper (Lillian Randolph).

Here it’s worth considering the real town upon which Bedford Falls is ostensibly based: Seneca Falls. That town was home to what is largely recognized as the first U.S. Women’s Rights Convention in 1848. During the convention, 100 of the roughly 300 participants signed The Declaration of Sentiments (including the only African American present, Frederick Douglass), which Elizabeth Cady Stanton modeled after the Declaration of Independence.

Today, if you visit Seneca Falls, you can visit the Women’s Rights National Historical Park and learn the history of the Women’s Rights Convention and how, according to the official website, the “story of struggles for civil rights, human rights, and equality, global struggles … continue today.”

Yet down the street is a different museum that stages a much different history: the Seneca Falls It’s a Wonderful Life Museum, opened in 2010.

It’s a Wonderful Life was filmed at the RKO Ranch in Encino, in Southern California’s San Fernando Valley. But today, Seneca Falls markets itself as “The Real Bedford Falls.” Visitors are encouraged to take an extensive walking tour of the “real” Bedford Falls (a two-page map is available for download); there’s an annual It’s a Wonderful Life Festival during the first week of every December; and in 2009, The Hotel Clarence opened, named after George Bailey’s guardian angel.

Seneca Falls has chosen to portray itself as Bedford Falls—a small town outside of the dominant modernity—in large part, because like many small towns across the United States, it’s in economic decline. Today, Seneca Falls’ population is a mere 6,340 people and the poverty rate is 15.4 percent, higher than the national average of 14 percent. Seneca Falls was once an industrial town in the nineteenth and into the twentieth century with multiple mills. Today, tourism drives the town’s economy.

To survive in global capitalism, real small towns must trope themselves as the small town. It is one final perverse triumph of It’s a Wonderful Life: A cultural fiction has become a geographic reality.