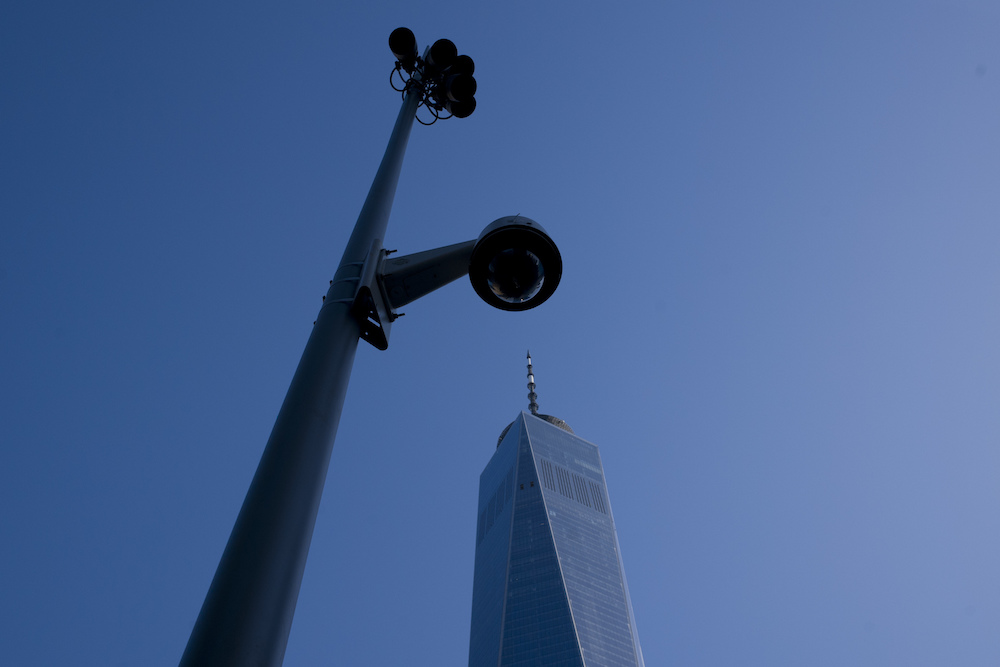 A surveillance camera on a light pole is part of the security curtain at the World Trade Center. Photo by Mark Lennihan/Associated Press.

In the anxious years since 9/11, surveillance has become one of the essential infrastructures for 21st-century social life, commerce, and government. With an endless number of drones, sensors, scanners, archives, and algorithms constantly at work for governments and corporations alike, these technologies of monitoring, securing, and sorting are not always visible to the naked eye, but are always humming in the background in ways that we have barely begun to understand. As these systems inch towards a creepy kind of omniscience, we need to consider where they will stop, and how our lives will change if we don’t set limits on their expansion into every nook and cranny of our lives.

It is no surprise that 90 percent of the world’s data has been generated in the last two years: Things that used to be anonymous, private, and unnoticed are now in plain sight. Alexa eavesdrops in our homes, Google remembers our most revealing searches, and even churches are using facial recognition to find out who is sitting in the pews. We are starting to see a bigger picture of limitless monitoring: a world where the watchers never reach the point of “enough” information and instead require an ever-expanding data set about our movements, buying patterns, online activity, and workplace productivity.

But even as surveillance becomes a dominant force organizing our world, most Americans haven’t had an informed conversation about how it is changing the way we live, work, play, and even wage war. We do not yet know who benefits from all this monitoring, classifying, and archiving of our behavior. Nor have we figured out whether surveillance will really make us safer, happier, or healthier. Such questions are sometimes difficult to answer because the technology is moving so much faster than our ability to make sense of it.

In fact, Americans have complex, ambivalent feelings about surveillance. We might be excited to hear that a digital pill can tell our doctor via Bluetooth that our meds have been ingested on time, but worry what will happen once the insurance companies know the contents of our stomach. We might want a smart refrigerator to order milk when we run out, but might not want the Internet of Things to listen to everything in our “smart home,” especially when we have a family crisis unfolding, such as a teenager dealing with drug addiction or a pregnancy scare. We might like taking nature photos with our own small drone, but wince when laws don’t prevent a creepy neighbor from flying his drone over our teenager’s backyard pool party. We happily share our lives on Facebook, but are outraged when we read about their scheme to manipulate our emotions. “Now that the experiment is public,” Forbes reported, “people’s mood about the study itself would best be described as ‘disturbed.’”

Yet we often live in a kind of surveillance denial, assuming it’s not a problem if we’re not doing anything wrong, or that it’s only a concern in other countries. For instance, most Americans probably shudder when they hear about the rise of social credit scoring in China. An authoritarian government watching everything through sophisticated CCTV and online monitoring systems, then coming up with a score that could prevent someone from getting a job—it sounds like something out of a dystopian movie. But if Americans assume it can’t happen here, they’re not paying attention. Consider the potential abuses of workplace surveillance. For an increasing number of American workers, the boss can see almost everything, even if you are a freelancer working in sweatpants at the kitchen table. Productivity software can take a snapshot every 10 minutes and combine them with keystroke analysis to create a “focus score” or “intensity score” for each worker.

Yet surveillance is rarely a cost-free endeavor. We may not realize it, but surveillance changes us, sometimes subtly, more often profoundly as we try to manage the impression we make on social media or on security cameras. The ubiquitous eyes of these devices can shift the way we’re supposed to feel about a particular place (is it safe to use the retina scanner ATM?) or particular action (will they think I’m stealing?). Surveillance often adds another angle, another perspective that not everyone experiences as benign or even tolerable. Social psychologists looking at workplace surveillance have found ample evidence that even the threat of surveillance is enough to change behavior, making workers “follow rules more carefully and act more subservient,” as well as experiencing greater stress, a loss of personal control, and “a decreased sense of procedural justice.” It’s harder to work when you know a camera is perched over your shoulder and productivity software is analyzing your keystrokes for maximum efficiency. Employers might like such productivity metrics, but rarely consider the cost to workers who feel like they have no place to hide.

Even as surveillance becomes a dominant force organizing our world, most Americans haven’t had an informed conversation about how it is changing the way we live, work, play, and even wage war.

For many of us, surveillance forces an adjustment of our interior life, a stiffening of our feelings: Someone is watching. Better look productive. Better not arouse suspicion. In this sense, surveillance can add an emotional charge to an existing atmosphere: It may even channel our chaotic energies into officially approved channels with names like vigilance, dread, fear, relief, certainty, permanence, compliance, consumption, adding a layer of meaning to the social scene that we can feel in our gut or on the back of our neck. Especially when surveillance is focused on security, it can add the gnawing sense that “something bad happened here,” “something bad could happen here,” “someone is watching,” or even the fantasy that “someone will save me.” Privacy, on the other hand, grants us a reprieve from such anxieties and uncertainties; it gives us the gift of what one scholar calls “emotional liberty.”

If we value liberty and autonomy, we need to have a more critical conversation about surveillance technology, one that leads to smarter legal protections of our privacy and dignity both online and off. People need to be able to educate themselves and choose not only how these technologies exist in the world at large, but also how much access they have to our personal data and even our bodies.

Right now, the spread of surveillance systems has a lot of momentum, though, ironically, they have rarely faced real scrutiny. Coming on the heels of his involvement in the Edward Snowden affair, Alan Rusbridger, The Guardian’s former editor, wrote that “securicrats” in the United States and United Kingdom are working to “collect and store ‘all the signals all the time’—that means all digital life, including internet searches and all phone calls, texts, and emails we make and send each other.” This is the cultural logic of the present moment: making human life endlessly visible, recordable, sortable, accountable, with little regard for how this might feel to millions of people. Everything goes into the archive. No one can opt out. Nothing goes away.

Is this really what we want? As someone who has spent the last 10 years exploring this issue, I fear a fundamental human right is missing here: the right to be left alone. Too often we think of freedom in a narrow sense, that it is simply what the law allows us to do or say. But we also need freedom from the quietly oppressive forces in our world. In the case of surveillance, we need freedom from insidious kinds of supervision, coercion, expectation, and obligation, all of which are rife in a world of ubiquitous surveillance. Psychologically, emotionally, and maybe even spiritually, we need freedom from the conformist pressures of CCTV cameras, the psychological burdens of workplace monitoring, the anxiety of being scrutinized by credit card companies looking at our purchases, or simply strangers gawking at us on social media.

And I hope we don’t shrug and simply grow accustomed to ever-increasing levels of invasiveness. Even if some aspects of surveillance culture are entertaining and even humane, from the benign side of social media to the well-intentioned camera connecting us to an elderly relative, too often we are faced with something much more controlling, if not outright manipulative. In its harsher forms, surveillance is nothing more than cold prodding to suss out our commercial prospects, to determine if we’re a potential asset or liability to some corporation, alternating with the even colder scrutiny of the state to see if we’re doing what we’re told. It’s not pleasant if you stop to consider what surveillance does to our bodies and souls, not to mention the healthy functioning of a democracy. All I’m suggesting is that we stop and think about it.