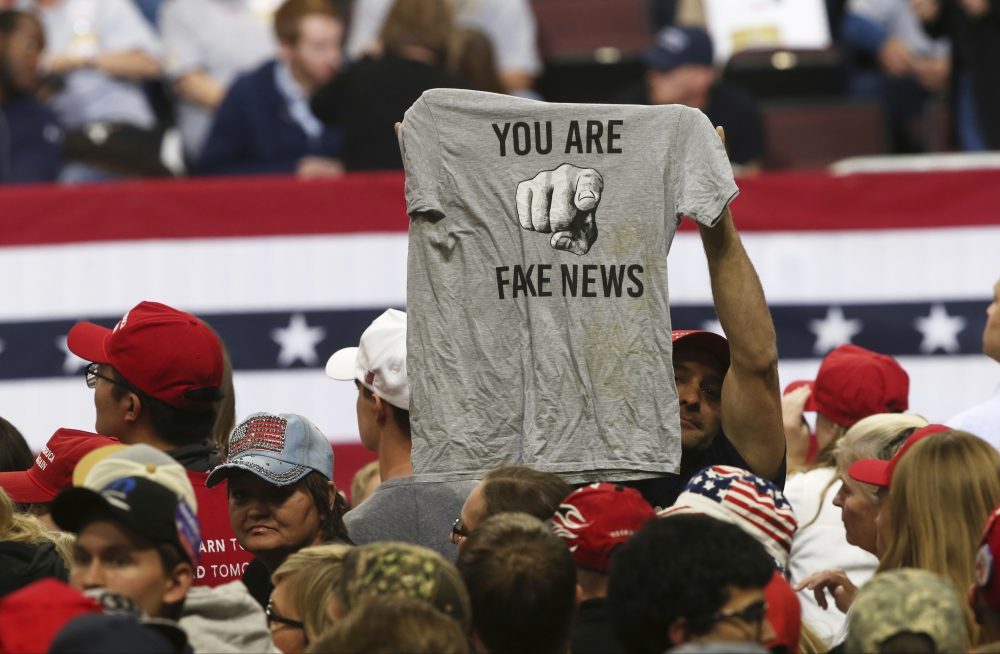 A Trump supporter holds up a T-shirt at a rally in Rochester, Minnesota in October 2018. Photo by Jim Mone/Associated Press.

It’s obvious that our political discourse is broken. People don’t just yell at one another on cable television, they also do it in restaurants, and on social media. Our communities are divided into red and blue. Our political opinions are further divided by gender, race, education, and income levels. Our sources of information are at war with one another, which makes it impossible to find common ground.

The one thing that Americans do agree on is that it’s getting worse: nearly 8 in 10 Americans polled in a 2018 election day survey said that, “Americans are becoming more politically divided.”

America’s public sphere is broken because we communicate as propagandists and we don’t know the rules of productive discussion and debate. Focusing on free speech or civility to solve these problems is, in fact, a red herring, a distraction from the real issues that need to be addressed.

It’s plain that our current way of speaking to each other doesn’t work. A recent Pew survey found that 53 percent of Americans thought that talking about politics with people on the other side of the political divide is “stressful and frustrating.” And, it seems, having those stressful and frustrating conversations makes things worse, not better. Sixty-three percent in the Pew poll said that talking to those across the political divide left them feeling like they have even less in common than they had previously believed. That could be because only 4 percent of Americans describe their political opposition as “fair.”

Partisanship and distrust have infected all aspects of our civic life. We only have confidence and trust in the government when our side controls it and we fear the worst when our side does not. There is currently no credible, neutral “umpire” of American politics—there is no media organization that we all trust to tell us what we need to know to make good decisions, and there is no government institution that we all trust to uphold the rule of law.

We treat one another as partisans first and as citizens second. And, what’s worse, our media, government institutions, and elected officials seem to prefer us to be partisans.

Without hyperbole, we might describe our moment as another “age of catastrophe,” similar to the one that saw the collapse of many economies and democracies between the two world wars.

Our current age of catastrophe is characterized by a fundamental breakdown of the nation’s public sphere—as evidenced by widespread distrust, political polarization, and frustration.

On October 25, 1931—during the previous age of catastrophe—philosopher John Dewey gave a radio lecture on the relationship between education and democracy. “Democracy will be a farce,” explained Dewey, “unless individuals are trained to think for themselves, to judge independently, to be critical, to be able to detect subtle propaganda and the motives which inspire it.”

America’s public sphere is broken because we communicate as propagandists and we don’t know the rules of productive discussion and debate.

Does Dewey’s edict still apply? Can we educate ourselves out of this disaster? Maybe. There are two important differences between then and now. First, in the 1930s, government propaganda contributed to the age of catastrophe. Today, we citizens are the propagandists behind the catastrophe.

Everything about our current media ecosystem is designed for us to communicate as propagandists. Ubiquitous notifications are designed to addict us so we continually engage with messages. Likes, favorites, and retweets reward us by pinging the dopamine receptors in our brains. Apps withhold notifications to keep us cycling back for positive feedback, and algorithms reward and amplify only the most polarizing messages—so that we are constantly urged to voice our most outrageous takes on political events.

Every single one of us has more propaganda power in our pockets than any government had at its disposal between the world wars. Instead of being independent thinkers who are overwhelmed by and succumb to government “newspeak,” we willingly create, consume, and spread propaganda ourselves. We create memes to attack our political opponents. We watch and share conspiracy theories and other “news” riddled with half-truths. We communicate cynically and gullibly—we believe nothing the other side says and everything our side says.

Communicating cynically and gullibly has broken our public sphere. Our addiction to propaganda has left us vulnerable. Look again at the 2016 Russian propaganda efforts and you’ll see that their strategy was to take advantage of our already hyper-polarized public sphere to get us all to spread their messages of distrust and resentment. And we did.

Like Dewey said in 1931, we need to be educated to think, judge, and be critical about the news that we post and consume. Unfortunately, most of us don’t know how to do this. We might consider encouraging social media users to take a training course in journalism skills so that when they produce media content they know how to do so responsibly.

Another difference between Dewey’s era and our own is that in 1931 we had more trust in government, media, and institutions than we do now, in large part because we participated in collective decision-making more back then than we do now. Robert Putnam explained in Bowling Alone that generations of Americans have stopped joining clubs, PTAs, and other civic organizations that once served as laboratories for democracy. Our failure to participate in these organizations meant that we failed to learn democratic practices. Our failure to participate also made us less trusting of the decisions that are being made on our behalf. Eventually, we began to distrust the democratic process itself.

We can still join civic organizations and learn the rules of productive conversations. We can also participate in structured conversations in our local communities. We have institutions that know how to teach such skills. Organizations like the Kettering Foundation conduct training in how to facilitate difficult conversations and create issue guides for communities to use for problem solving. Communication centers like the Center for Public Deliberation at Colorado State University are labs for teaching these democratic skills. Students there learn how to design fair deliberative processes, facilitate conversations with Colorado communities, and act as neutral guides for real-world community problem solving.

And it works. According to Martín Carcasson, director of the Colorado State center, “with a good process, we can significantly lower the bar on the difficulty of the conversation, and often get much better results.” He said that, in his 12 years of facilitating those conversations he has found that the situation ended up worse than it started in only a handful of cases. “I truly believe,” said Carcasson, that “we aren’t nearly as divided as we think we are, and a quality conversation can reveal that.”

A recent report from More in Common backs up such optimism: “77% of Americans believe our differences are not so great that we cannot come together.” In other words, those 63 percent of Americans who reported having even less in common after talking about politics with someone from the other side of the political divide probably weren’t doing it right.

Perhaps Dewey was overly optimistic, and democracy has always been something of a farce. Even so, learning to communicate as citizens rather than as propagandists and learning how to have productive conversations about difficult topics could prevent our democratic farce from turning into tragedy. We must avert the catastrophe of our broken public sphere.