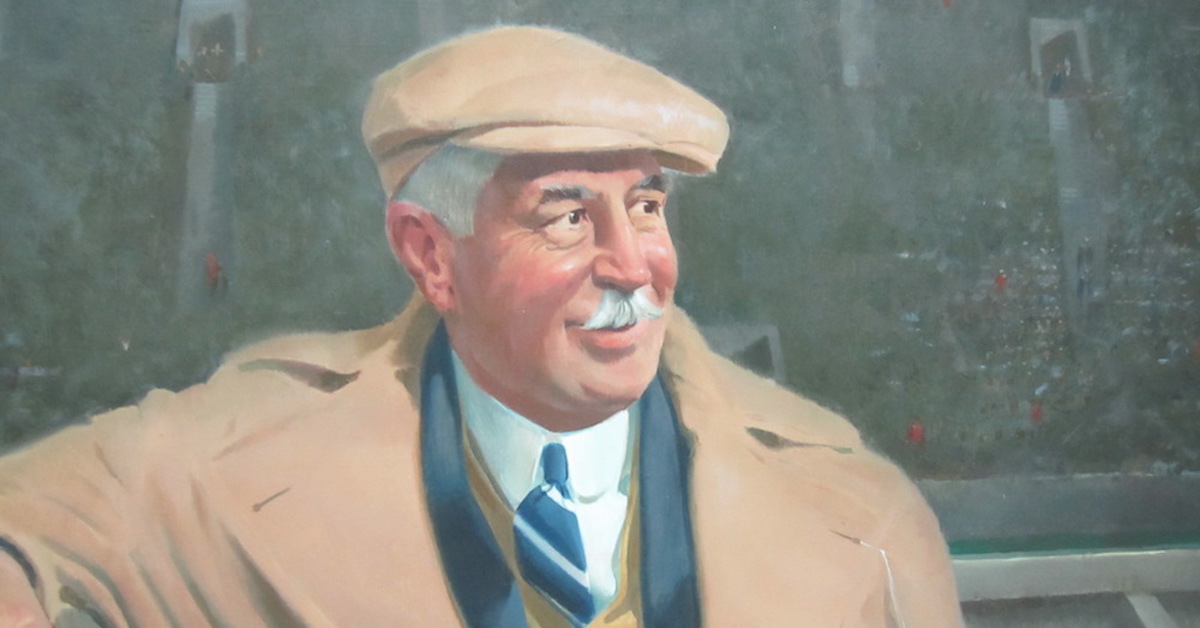 A portrait of Walter Camp hangs at the National Portrait Gallery in Washington, D.C. Courtesy of Wikimedia Commons.

Camp worked on the game his entire adult life, a devotion that began in the second decade after the Civil War. On November 13, 1875, standing on the sidelines as a high school senior in New Haven, Connecticut, Camp watched the first-ever Harvard-Yale football game, which was based on rugby that had been taught to Harvard a couple of years earlier by a Canadian team. By the following year, when Camp was a student at Yale and was chosen to play in the second Harvard-Yale game, he had already studied rugby’s rules sufficiently that Yale’s captain took him along to help negotiate game rules with Harvard’s captain.

Later in 1876, student representatives from Columbia, Harvard, Princeton, and Yale met to organize the Intercollegiate Football Association (IFA), a rugby league comprised of and managed by college students, within which Camp initially would work and the American game would begin and grow.

America’s college players quickly broke away from rugby. Rather than trying to blast forward in the swarming scramble of a rugby scrum, often causing the ball to bang out of the scrum at unpredictable locations, the American college students spontaneously started kicking the ball backward—an invention Camp credited to Americans’ “idea of order and preparation.” The backward kick involved calculation and a plan, to get the ball to selected players who could run around the scrum-bunched players.

Camp was a leader as the American game continued to distance itself from rugby. He was Yale football captain as a junior and senior and was dispatched as a delegate to the IFA’s annual rule-making conferences. Camp also kept studying football, making his “knowledge of the game and his resourcefulness so great,” one Yale player said, that “we were easily ahead of any other college.” As American players refined the game around the backward kick, Yale was generally first to adopt new practices that became widely used.

For example, during Camp’s playing days and captaincy, more organization was added to the game, including a more distinct separation of opposing teams during a scrimmage, alignment of players along a scrimmage line, and an accompanying separation of teams into distinct offensive and defensive roles. (This was in contrast to rugby scrums, where teams were on both offense and defense.) Player positions were developed, with names and functions, including a “middle rusher” on the offensive team, who initiated a new down by a backward kick at which he had become proficient (foot on the ball, sharp downward pressure propelling the ball backward in a quick “snap”). Another player, drawn in to gather this rolling and bouncing snap, was named “quarterback” for his close location.

Camp attended IFA rules-making meetings even after graduation, providing continuity in rulemaking as other students moved on. And he worked outside the meetings to build up the game with the zeal of an inspired entrepreneur. Camp initiated the All-America team of the best college players. He developed an annual rulebook supplemented with game-promoting information, wrote and published playing instructions in pamphlet and book form, gathered and kept records of rule interpretations and decisions made in actual games, and developed a book of rule interpretations for referees. He taught playing techniques both at Yale and at other schools, and coached Yale’s team, making him the first “head” coach in American football, and later the first “athletics director.”

Most important of all, in 1882 Camp made a major breakthrough, the “downs-and-distance rule,” which allowed a team to retain ball possession for a set of three downs, but only if they had previously completed an advance of five yards in three downs. Years of usage has obscured the novelty and creativity of this rule, but it was a truly out-of-the-blue invention without precedent. Camp’s fellow rule makers considered it unworkable. The rule was enacted by aid of the IFA president, who had known and worked with Camp, but only on the condition it would be removed early in the fall if it proved not useful; fortunately, the rule was immediately successful.

The new playing goals of the downs-and-distance rule—to achieve (on offense) or prevent (on defense) a five-yard advance in three downs—remade the developing game. Constant and imperative, operating on almost every down throughout the game, these goals establish the basic structure, procedure, and driving force of the game. At the same time, the game is infused with tension and interest. Each play becomes important, a limited opportunity to advance toward the needed yardage gain—five yards then, ten yards now. Viewers watch with greater awareness and suspense, knowing the yardage goal and waiting eagerly for the outcome. Each play tells a story, with winners, losers, and sometimes heroics.

The downs and distance rule also expanded the need and opportunity for preparation of distinct tactics and strategies, designed for each down’s goals and parameters. The potential for innovation was open-ended, providing what Camp considered a primary appeal of the game: “the fact that it is constantly developing and admits of new combinations, strategies, and surprises.”

Camp had a life beyond football. Two years after inventing the downs-and-distance rule, Camp began work at a worldwide clock company headquartered in New Haven, a full-time job that he somehow carried out—eventually serving as the company’s chief executive for 20 years—along with his full load of football activities. In 1888, he married Alice Sumner, the half-sister of William Graham Sumner, a famed Yale University professor. In addition to having two children, Walter, Jr., and Janet, Alice was an active helpmate who even spent time at Yale football practices in Walter’s business-related absences. There she became appreciated as “Mrs. Walter,” reporting to Walter in the evening. When the Yale players came over in the evenings for discussion, instruction, and planning, she entertained as a “generalissimo of high spirits” paired with the quiet-mannered Walter.

Rather than trying to blast forward in the swarming scramble of a rugby scrum, often causing the ball to bang out of the scrum at unpredictable locations, the American college students spontaneously started kicking the ball backward—an invention Camp credited to Americans’ “idea of order and preparation.”

Two other fundamental features of American football would come after the downs-and-distance rule—first, interference, or blocking in front of a ball carrier (installed in 1888); and second, forward passing, added in a halting, stepwise process from 1906 to 1912.

The forward pass was proposed as a way to counter increased massing of blockers and open up the game, but at first it produced an impasse on the rules committee. Camp wanted simply to double the needed advance in three downs to ten yards, forcing innovation in running plays. But others insisted on forward passes, which Camp opposed as potentially too disruptive of the existing game.

The committee impasse, coupled with a jump in injuries and deaths from football, got the football-loving President Theodore Roosevelt involved. A friend of Camp, Roosevelt gradually sided against him and with those who wanted further change. In 1905, large multi-college conferences were held, at which West Point representatives, including a friend of Roosevelt’s who had just served as a military aide at the White House, led an enlargement of the rules committee that reduced Camp’s role. But even this new, larger committee moved gradually to approve forward passing, and it was 1912 before a full-scale passing program generally similar to today’s was enacted. By that time, Camp also was a supporter.

In 1917, Camp wrote in his annual guide that the football rules committee was satisfied with the game and ready to let it “crystallize” in its then-present form. By that time the United States had entered World War I and college football was minimized, with young men leaving college for military service. However, football was played under recreational programs for armed-services personnel, some of whom were new to the game. Camp, then serving as athletic director for the U.S. Navy, reported that at one Naval base 15 football teams had been organized.

The war’s end in November 1918 unleashed a huge and surprising surge of interest in American football. Various reasons for the surge have been offered—pent-up demand from limited war-time civilian play; increased exposure to football through military programs; new publicity from movie newsreels and radio broadcasts; and what Camp-had characterized as the “crystallization” of the rules, which allowed players and fans to build familiarity with the game. But underlying the growth was the inherent appeal of the basic game-defining features built in by Camp and other early rule makers.

The 1918 surge began a new era of increased play and spectator interest. Camp was astonished upon learning that on a single Saturday during the 1921 season, nearly 10,000 players were in action for colleges across the country. University administrations faced the new challenge of accommodating a greatly increased demand for tickets. The response was a stadium boom—over 50 permanent concrete stadiums were constructed during the 1920s, some with giant capacities like the University of Washington’s 46,000-seat facility in 1920; Stanford’s 60,000-seat stadium in 1921; and Ohio State’s 63,000-seat stadium in 1922. Most are still standing, often prominent in the midst of the campus, a striking witness to the unique American coupling of football and academic life.

Camp witnessed only seven years of American football’s post-1918 growth before he died during the night between sessions of a March 1925 rules-committee meeting. His death was reported on newspaper front pages across the country, with headlines such as, “Busy to the End with Game He Loved.”

Now he has been gone for nearly 100 years, but the game he set on its way lives on, still defined by his contributions. It has grown far beyond what he might have contemplated but continues to change and adapt to new concerns—as he predicted it would.