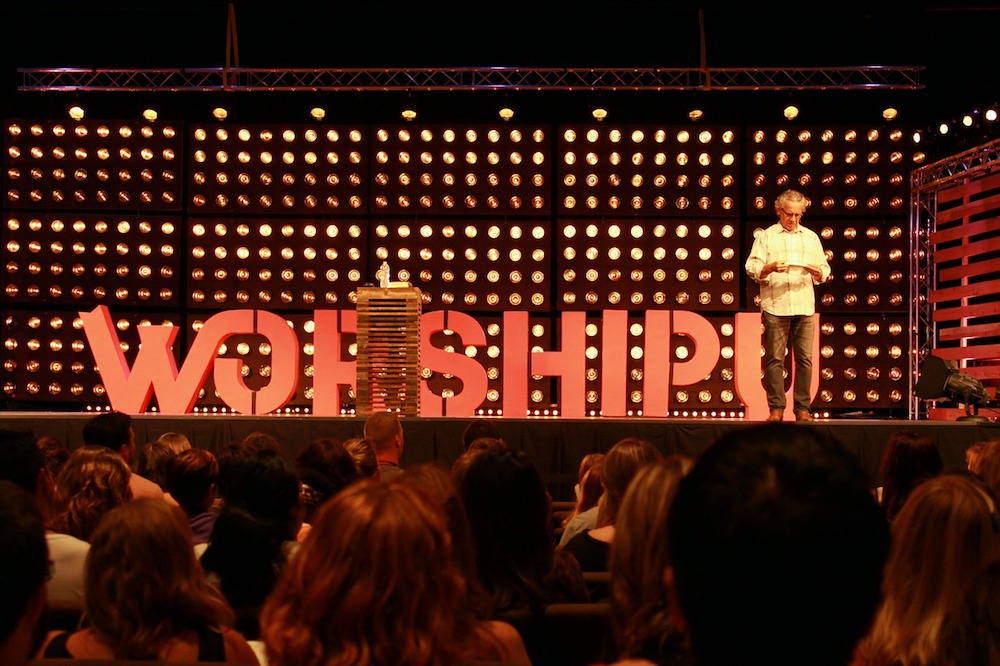 Is this heaven, or Redding?

These days, the city of 91,000 at the north end of the Sacramento Valley, seems to sit halfway between the godly and the earthly—and not just because of the divine spectacles of nearby Mounts Shasta and Lassen. At the heart of Redding stands a quintessentially California church with a focus on community impact so intense you could almost call it supernatural.

Bethel Church may not be a household name in California, but it should be. Because there is no other institution in our state better at engaging with its hometown than Bethel and its 11,000-plus members.

Ask anyone about the “Bethel Effect,” as it’s known in Redding, and they’ll start by saying that church members have changed the community in so many different ways that it is impossible to list them. That’s because the engagement of Bethel members does not follow the modern rules of civic engagement, which is supposed to be strategic, carefully planned, and targeted at a particular issue or problem.

Instead, Bethel’s engagement with Redding is big and broad, touching almost every aspect of civic life. And it is grounded not in the language of activism but in celebration and love—of God and of the place where you live, and the people in that place.

This lack of structure in Bethel’s assistance to its hometown is intentional. (“You can’t be trained for the freedom of heaven in a structure of law,” one church official told me.) And it suggests a broader lesson that applies also to secular people and institutions: The way to start improving your community is to throw yourself, heart and soul, into addressing people’s needs.

When Redding’s civic auditorium was failing, Bethel and its members didn’t do a years-long study. They quickly put together a nonprofit, Advance Redding, that now manages the auditorium and donates to other local charities, including the Cascade Theatre and the Riverfront Playhouse. When the Redding Police Department was about to lay off four officers, Bethel and its members launched a fundraising drive to pay the cops’ salary. After the Carr Fire destroyed more than a thousand residences last summer, Bethel gave $1,000 in cash, no strings attached, to every family, church member or not, who lost a home.

Church members are enthusiastic volunteers for virtually every civic enterprise in town, from homeless services to the weekly city cleanups of the parks and trails that define Redding’s outdoor lifestyle. Bethel helped raise money to assist the completion of Redding’s free water park, Fantasy Fountain, and design-savvy Bethel members voluntarily created a style guide for signage in city parks.

As it grows, Bethel has better connected Redding to the world. The church, whose pastors and musicians fly around the globe to preach and perform, helped convince United Airlines to start daily, nonstop service between Los Angeles International and Redding. Flights began this month. The church has developed a Global Response team to respond to disasters around the world (and as close as Paradise, California).

And the Bethel School of Supernatural Ministry, a national leader in attracting foreign students, has made the geographically isolated city more international.

Bethel—through the ministry school, a dizzying array of programs, a bookstore, a coffee shop, a Grammy-nominated Christian music collective, a top-notch digital media operation, and the nine Sunday services it needs to accommodate all its members—offers two messages that inspire service in Redding. First, its theological underpinnings emphasize that through God, individuals can triumph over challenges and experience miracles. Second, the church celebrates Redding and constantly highlights opportunities to join community projects. Pastors preach that there is nothing so magical and so demonstrative of Christian belief, as to connect with neighbors.

“Bethel really encourages everybody to take ownership of the area, to live your faith in a way that’s felt,” says Redding Mayor Julie Winter, a nurse practitioner and member of the church board. “Bethel says that God loves me all the time, that God is for you—so who can be against you? So why not start that new business? Why not volunteer to make this city an amazing place? Why not, in my case, run for city council?”

Bethel was founded as a small Assemblies of God congregation in the 1950s, and it remained small and traditional until the arrival of Bill Johnson as its senior leader in 1996.

Johnson, who grew up partially in the Redding area, encouraged experimentation and transformed Bethel into a nondenominational “ecstatic” church that values healings, prophecies, rock-style music (pick up ear plugs from the bowl on your way into services), accessible preaching, and community action. This mix has attracted a young, diverse membership in an older, whiter part of the state.

It also attracts controversy. Evangelical churches and mainline denominations alike complain that Bethel deviates too far from Christianity. Many question Bethel’s healings and showy practices (like the “fire tunnel”). And the church’s offers of counseling for “unwanted same-sex attraction” and its vocal opposition to state legislation banning gay conversion therapies, has also been divisive, including within the church itself; several church members told me they want a more inclusive approach on homosexuality and gender identity.

This lack of structure in Bethel’s assistance to its hometown is intentional. (“You can’t be trained for the freedom of heaven in a structure of law,” one church official told me.) And it suggests a broader lesson that applies also to secular people and institutions: the way to start improving your community is to throw yourself, heart and soul, into addressing people’s needs.

Within Redding, Bethel’s growth and its community impact have raised some public concerns about whether the church is taking over the town. But the notion of a Bethel takeover of Redding misunderstands the church and its ambitions.

In an interview, Bill Johnson emphasized that he didn’t want to take over anything, and he expressed some discomfort with the church’s size. He praised other churches across the city for their work and noted that Redding had built its own momentum over the last generation with a new City Hall, the Turtle Bay Exploration Park, and the Santiago Calatrava-designed Sundial Bridge across the Sacramento River.

Johnson may be a revivalist—he cites the early 20th century Los Angeles Pentecostal preacher Aimee Semple McPherson as an inspiration for how she brought people to Jesus and fed the poor—but he is a decidedly 21st century one. Instead of creating a new denomination or satellite churches around the country or world, Bethel has built the sort of global and informal networks that are popular in Silicon Valley.

Through the internet, books, music, conferences, and an alumni network, Bethel spreads its visions without the high costs and management headaches of building churches. Revenues from materials and events help fund its service to Redding.

Christianity Today, which has covered Bethel closely, reports that Bethel’s independence and its networking approach have made it “the heart of a charismatic boom in North America and around the world.” To take just one California example, the youth-oriented ministry and music label Jesus Culture Music started as Bethel’s youth group before moving to Folsom, California and establishing a church.

Redding, which has recovered slowly from the Great Recession, is still not “heaven on earth,” the church’s stated goal. But there is more to come. A $148.8 million expansion of Bethel’s campus was recently approved after what city officials say was an extraordinarily detailed review—in part because of concerns about the church’s influence.

But at City Hall, most seem to view Bethel as a heaven-sent asset that brings in people, energy, and money, but without the pollution of a major manufacturer. Local wisdom runs along similar lines: Bethel can be a little strange, but where would the city be without it?

“Usually, when my phone rings somebody wants something,” says Redding Police Chief Roger Moore, who credits ministry school students with helping revitalize the troubled Buckeye Terrace area of the city. “But when they call, it’s always to ask if we need anything. They have never asked me for anything.”

At the Bethel services I attended, Redding was always a focus. The main church headquarters stands on top of a hill with a Red Sea-sized parking lot and Shasta and Lassen views. While members sang, “I have found my home,” screens flashed information about various community gatherings.

At a service at the Cascade Theatre, pastor Candace Johnson encouraged members to participate in the Redding City Identity Project, a civic effort to give the town a clearer, positive narrative to boost investment, tourism, and local businesses. Bethel itself may provide one solution to the identity question.

Around the city, new businesses are thriving, many tied to Bethel members. Diego and Deborah Tantardini, who relocated to Redding from Milan, Italy, because of the ministry school, have opened Tantardini’s European Bakery-Deli, with cannoli to die for; they also teach cooking classes for kids and adults at Shasta College.

The filmmakers Joy and Matthew Thayer, Bethel members with a blended family of eight children, have opened Speropictures, an entertainment studio that, drawing on talent attracted to Redding in part by Bethel, is making commercials, documentaries, TV shows, and even feature films.

Sam LaRobardiere, a Washington, D.C., construction worker who moved to Redding through Bethel, roasts coffee at his business, Theory Collaborative. The large and comfortable café, which was designed by locals and just won a North American prize for its espresso, is as sophisticated as any you might find in San Francisco.

“I always had great ideas, but it wasn’t until I got in this environment that people asked me what I was going to do about it,” says LaRobardiere. “This community is a place where you can realize lifelong dreams.”

In Redding, as it is in heaven.