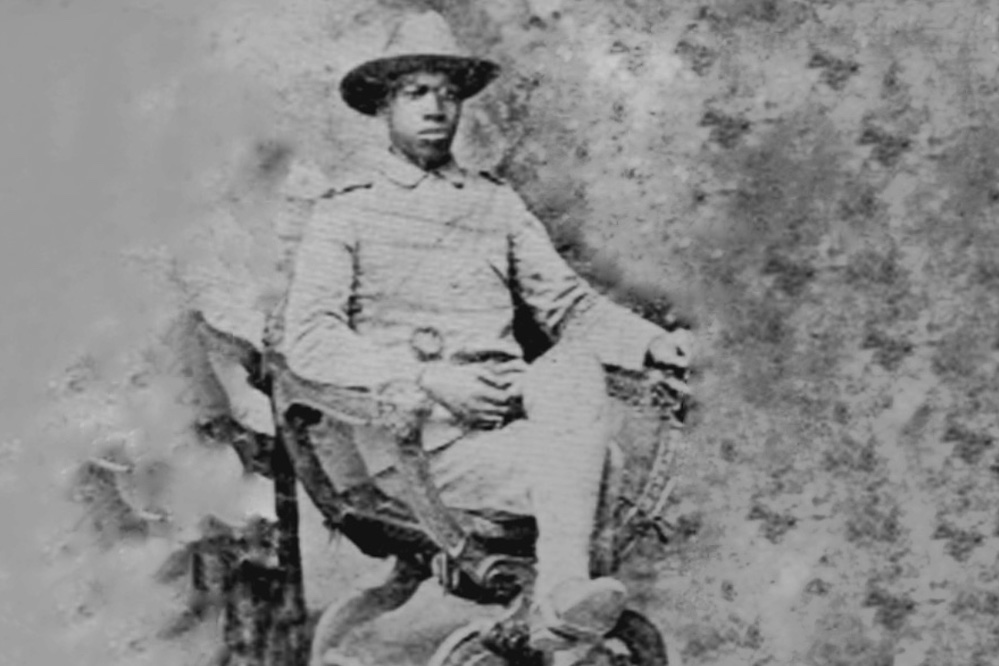 In 1899, during a campaign on the island of Luzon to entrap the Filipino revolutionary president Emilio Aguinaldo, a 21-year-old buffalo soldier named David Fagen deserted from the American army.

He wasn’t homesick. Young Fagen decided to join the Filipino revolutionaries and quickly took up arms against his former countrymen. In time, he became a guerrilla leader of such renown that his Filipino fighters called him “General Fagen.”

For more than a century, little was known about Fagen, “the notorious renegade,” beyond the basic outlines of his story. The army had gone out of its way to suppress reports of his exploits; if they couldn’t expunge his name from the record altogether, they could disparage him as a criminal—a “badman.” Fagen himself left nothing in writing and those who knew him best either died young or neglected to leave much byway of reminiscences, journals, or correspondence. With the dearth of evidence, trying to distinguish the real Fagen from the mythic Fagen presented a challenge. By digging in long-buried files in the National Archives; combing through newly digitized newspaper collections; accessing forgotten, out-of-print books; as well as conducting research in the Philippines, I have been able to reconstruct much of Fagen’s story.

David Fagen was born in Tampa, Florida, in 1878, the youngest of six children of former slaves. With little schooling and still in his teens, he labored in a Florida phosphate camp, seemingly destined for the life of the typical, black Southern man of the period—impoverished, illiterate, and subservient to whites. With the specter of lynching and the chain gang looming over Tampa’s blacks, they were said to “live in dread at all times.” 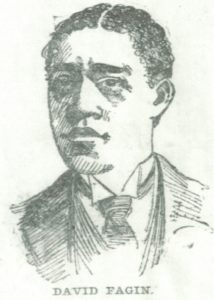 Sketch of David Fagen, or Fagin, as he was sometimes called. Courtesy of Salt Lake City Herald, October 30, 1900.

With the advent of the war against Spain in Cuba, Tampa became the army’s staging ground. Soon the buffalo soldiers—four regiments of black regulars under white officers—arrived from the West where they had been stationed since the end of the Civil War. The sight of these rugged soldiers who refused to be intimidated by white hostility sent 19-year-old David Fagen rushing to join up. After just three weeks in the 24th Infantry, he sailed off to war in Cuba. There, as a nurse in the yellow fever camp at Siboney, he contracted the illness. Unlike many others, he survived. A year later, in June 1899, he sailed for the Philippines with his regiment.

The Philippine-American War can be better understood as part of a larger conflict more aptly, if clumsily, called the Spanish-American-Cuban-Filipino War. The end result of the fighting on both sides of the globe was that America, intent upon developing a global commercial empire, assumed control of the last major colonies of a doddering Spanish Empire. Puerto Rico has been held in limbo ever since, and the Platt Amendment of 1901 effectively gave the U.S. de facto control of Cuba, a betrayal that has soured the two countries’ relations to this day.

In the Philippines, Commodore George Dewey’s cruisers destroyed Admiral Patricio Montojo y Pasarón Montojo’s decrepit fleet in Manila Bay and shiploads of American volunteers sailed from San Francisco. Emilio Aguinaldo’s revolutionary Army of Liberation had taken over all of Luzon save for the old, walled city of Manila where they had corralled 13,000 Spanish soldiers. With the Spanish defeated, the Filipinos declared independence, wrote a constitution, and formed a government. But it soon became clear that America had come, not as liberator as first hoped, but as conqueror intent upon supplanting Spain as colonial master of the islands. Following months of rising tension, war broke out between the U.S. Army’s Eighth Corps and the Philippine Army of Liberation on February 4, 1899.

President William McKinley’s administration cited the racial inferiority of the Filipinos as a primary justification for denying them sovereignty and engaging in a bloody war of conquest. Six thousand African-American soldiers, beginning with 2,100 of the famed buffalo soldiers, were sent to the islands at a time when the fortunes of blacks in America had hit rock bottom. This was the dawn of the Jim Crow era as the North capitulated to the doctrines of the extreme racists of the South. That many of the black soldiers sent to the Philippines felt conflicted in their loyalties should hardly be surprising. It was a time marked by lynchings and race riots, disenfranchisement, and the implementation of the degrading “separate but equal” regime in the South.

He taunted his American pursuers and sent officers whimsical and threatening letters—“Wanted—a private in my company to command like you commanded me. Moss please apply.” And even in the midst of combat, he challenged General Frederick Funston to a duel.

The four regiments of the buffalo soldiers consisted of black regulars under white officers, a point of bitter contention among the black troops. Fagen detested his white commanding officer, Lt. James Alfred Moss, a West Point graduate from Louisiana. As Moss and Fagen clashed repeatedly, the forfeitures of pay and the time in the guardhouse mounted. After two months in the Philippines, Moss fined Fagen more than a month’s pay and sentenced him to 30 days of hard labor. On November 17, 1899, during the campaign to capture the fleeing Emilio Aguinaldo, Fagen deserted and joined the Filipino guerrillas. In that same month, having tried to stand up to the Americans in set piece battles for a disastrous nine months, Aguinaldo ordered a shift to guerrilla warfare. David Fagen, with his army training, would prove invaluable to the guerrillas under Filipino General Urbano Lacuna.

The army’s great concern, and the reason for suppressing word of Fagen’s activities in the field, was that he might inspire a revolt among his former black comrades in arms. And in fact, he was not alone in his decision to take up arms against his former countrymen. As many as fifteen of the buffalo soldiers decided that their place, rather than helping suppress the Filipinos’ struggle for independence, was in joining them in revolution. David Fagen would be by far the most successful and famous of the black deserters. For the next year and a half, he led ambushes and assaults, large and small. After eight months of censorship, the Manila newspapers finally began to report on his exploits and the news soon traveled to America. By the end of 1900, Fagen was virtually a household name, particularly among the African-American community.

In many respects, the war in the Philippines bore eerie similarities to the 20th century war in Vietnam: search and destroy missions in jungles and rice paddies; a peasant foe who blends into the populace; spear-traps and deadly ambushes; torture and atrocities; torched villages; reconcentration camps; a vocal anti-war movement at home and an administration that cast anyone in opposition to the war as a traitor. And a racist undercurrent permeated every aspect of both wars.

That racism was used to slur Fagen. He was portrayed as a man who “shot first and asked questions later,” burning with a desire for vengeance and accused of personally executing white American prisoners. Of Fagen’s rage, there is no doubt, but more often he expressed his fury through a caustic humor. He taunted his American pursuers and sent officers whimsical and threatening letters—“Wanted—a private in my company to command like you commanded me. Moss please apply.” And even in the midst of combat, he challenged General Frederick Funston to a duel. Funston, obsessed with seeing Fagen hang from a picket rope, pursued him relentlessly but without success.

Fagen enjoyed a good time. He was a master of stud poker, having regularly relieved his fellow soldiers of several hundred dollars on payday. He was fond of carousals, played a guitar, and lived in camp with his Filipino wife. He was “often amusing” and voluble, supremely confident, and a natural leader.

Fagen even inspired mystery, and controversy, in matters of death. With a reward on his head, he retreated to the desolate Pacific coast. On December 1901, a Filipino hunting party brought in a moldering head and Fagen’s effects, claiming they had killed the renegade. The army announced Fagen’s death and hundreds of newspapers covered the story. Only the English-language Manila American made a mockery of the Army’s account of Fagen’s killing, but that story went unreported in America and was entirely overlooked until I recently discovered it.

Over the past forty years, some commentators have speculated that Fagen had faked his death and lived on for an undetermined period in the mountain fastnesses of northern Luzon. The brevity of the military’s inquiry into Fagen’s supposed killing and the quickness with which the case was closed has long made the investigation suspect. Based upon evidence both direct and circumstantial, my research indicates that Fagen lived on for at least five more years, perhaps much longer. Again, the American authorities’ desire to suppress any mention of Fagen—or any of the other black deserters—made following his trail extremely difficult.

President Theodore Roosevelt declared the islands pacified in July 1902; but, in fact, armed Filipino resistance continued through the first decade of the 20th century. While 4,200 American soldiers died in the conflict and as many as 24,000 Filipino combatants, the far greater toll was on the civilian population: Several hundred thousand Filipinos, perhaps as many as half a million, perished before they were ultimately subdued.

In the end, Fagen was not a central military player in the war; the region where he fought was of secondary importance in terms of the larger struggle. But he is important as an African-American who took up arms against a country racist to the core and bent on empire at the expense of a dark-skinned people. As a revolutionary officer and later as a bandit leader, Fagen confounded the American whites. He not only challenged their supremacist assumptions; he also mocked them, defiant in the face of the noose and the burning stake.