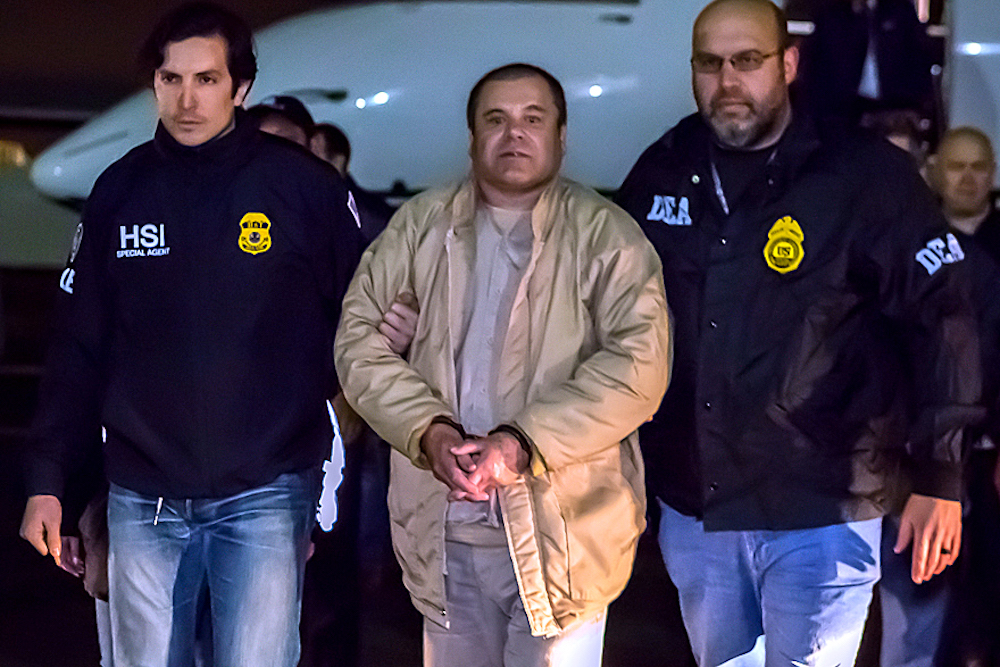 Joaquín “El Chapo” Guzmán is taken into U.S. custody after his extradition from Mexico. U.S. Immigration and Customs Enforcement/Wikimedia Commons.

Myths naturally swirl around colorful international fugitives like Sinaloa cartel boss Joaquín “El Chapo” Guzmán, global arms trafficker Viktor Bout, and WikiLeaks founder Julian Assange. But myths are also common with regard to the process by which such wanted individuals are most commonly transferred from one jurisdiction to another to face justice, namely, extradition. Because of these myths, extradition—although well-known—is often misunderstood.

The media sometimes covers extradition as a criminal trial or as a judicial decision about a fugitive’s guilt or innocence, but neither is correct. Extradition is best understood as a formal, cooperative process of transferring the custody of an individual to the jurisdiction of the state seeking their recovery with the purpose of prosecuting that individual (or re-incarcerating them if they had escaped from detention).

After all, the chief reason for extradition is to prevent impunity—so that people can’t avoid responsibility for their crimes just because they are physically located in a state other than one that has a criminal interest in them.

Extradition focuses on individuals who have been charged with or convicted of a crime, and so mere criminal suspects or material witnesses to a crime are not the subjects of extradition. At the same time, one of the most important things to know about extradition is that it is not a form of punishment—but merely a process that can lead to punishment. Neither the arrest that typically precedes extradition, nor the prosecution and/or incarceration that may follow, is formally part of the extradition process.

A decision to extradite also does not signify that a fugitive is guilty of the underlying crime. Rather, extradition is an exercise that simply assesses whether a person can be transferred from one state to another to face justice. Such an assessment, which often takes the form of a hearing, fundamentally asks whether the state’s request meets the standards of any applicable treaty (which, for example, tend to include “dual criminality” in which the offense at issue is punishable by both the requesting and requested states). It’s important to recognize that an extradition hearing is not like a criminal trial (for one thing the subject typically may not introduce evidence or cross-examine witnesses) and, indeed, an extradited individual may ultimately be exonerated at trial.

Extradition may seem to be a relatively modern phenomenon, but in fact, the first recorded extradition treaty can be traced back to the mid-13th century B.C. (about the time of the Biblical Moses) when Egyptian and Hittite leaders entered into a peace treaty that contained a provision for the reciprocal return of criminals.

Under international law, states have no inherent obligation to extradite an individual at the request of another state, even in cases of war crimes or crimes against humanity; thus, some form of affirmative commitment, like a treaty, must exist. That said, a state is generally free to extradite a fugitive if it likes, even simply as a courtesy, although some restrictions apply, such as if substantial grounds exist for believing that a fugitive would be in danger of being subjected to torture by the requesting state.

Another myth is that only a national’s home country can seek their extradition. While that is frequently true (as the vast majority of crimes are committed by nationals in their homelands), consider the case of U.K. national and resident Gary McKinnon. The U.S. sought his extradition for cyber hacking U.S. government agencies, despite the fact that he had never set foot on U.S. soil. In the end, the U.K. blocked McKinnon’s extradition on account of his Asperger’s syndrome and concerns that he posed a suicide risk if convicted and incarcerated—potentially for decades—in a U.S. prison.

Even when there are extradition treaties in force, as between the U.S. and U.K., individual extraditions are not guaranteed. A requested state may deny extradition for any number of reasons, from improperly filed paperwork, to “statute of limitations” bars regarding the underlying offense, to concerns about the health of the fugitive and the anticipated physical or judicial mistreatment of the individual upon recovery, to questions about double jeopardy and competing jurisdictional claims. Some countries, like Namibia, are notorious as “safe havens” for international fugitives because those countries have few, if any, extradition treaties and have demonstrated an unwillingness to extradite individuals residing within their borders.

Notably, extradition is not based entirely on international law; it involves a mix of domestic law (including even subnational law where the requesting entity is, say, a U.S. state or Canadian province) and political objectives. As the Constitutional Court of the Republic of South Africa put it: “Each State is free to prescribe when and how an extradition request will be acted upon and the procedures for the arrest and [transfer] of the requested individual. Accordingly, many States have extradition laws that provide domestic procedures to be followed before there is approval to extradite.”

To understand how a state’s political interests can figure into extradition, one need look no further than the ongoing case of Meng Wanzhou, the chief financial officer of Chinese tech giant Huawei and the daughter of the company’s founder.

The ultimate call on whether an individual should be extradited lies with the executive (for example, the U.S. secretary of state) who is not bound by the judicial record, and whose decision is not reviewable by a court.

The U.S. requested Canada arrest her on its soil (she and her husband own two homes in Vancouver) and to extradite her to the U.S. to face charges relating to stealing trade secrets about a smartphone-testing robot, obstructing a criminal investigation, and committing bank fraud by evading U.S. trade sanctions against Iran. The Chinese government claims the U.S. charges are politically motivated and is placing heavy pressure on Canada to deny the pending U.S. request for extradition. This pressure includes detaining several Canadians in China and delivering a death sentence on a Canadian drug smuggler.

Extradition also is not necessarily controlled by the courts, even though media coverage of high-profile extradition fights—like the decades-long attempts by Los Angeles County prosecutors to have the film director Roman Polanski extradited from various European locales—makes it appear that the process takes place in front of judges .

In fact, courts don’t necessarily make the final call in extradition cases. In some states, the executive branch exercises exclusive control; and in other states, courts play a mere advisory role. Most states actually have a mixed system in which both the judiciary and the executive play a material role in decision-making on extradition requests. In such cases, including in the U.S., the court’s opinion typically is binding if a person is declared non-extraditable. But if the person is declared extraditable, the executive can override the decision. That’s right—the ultimate call on whether an individual should be extradited lies with the executive (for example, the U.S. secretary of state) who is not bound by the judicial record, and whose decision is not reviewable by a court.

These decisions can be and often are made based on humanitarian or foreign policy grounds. In 2000, the British home secretary decided not to extradite former Chilean President Gen. Augusto Pinochet to Spain (due to crimes committed against Spanish citizens in Chile during his rule), as he assessed his poor physical health rendered him unfit to stand trial.

Finally, and contrary to the impression you may have gained from the movies or the press, there are many alternatives to extradition. These include asking a third state to arrest a traveling fugitive upon entering its territory; requesting the host state to consider prosecuting the fugitive for crimes against its own laws; arranging for informal law enforcement cooperation; having a host state deport a subject specifically to a country that has expressed a criminal interest in the subject; or even unilateral measures like a “lure and capture operation” on the high seas.

Some alternatives are more controversial than others, and many may be legally questionable. But the next time you read of a high-profile extradition case, remind yourself that, for most fugitives, extradition is not the only way home.