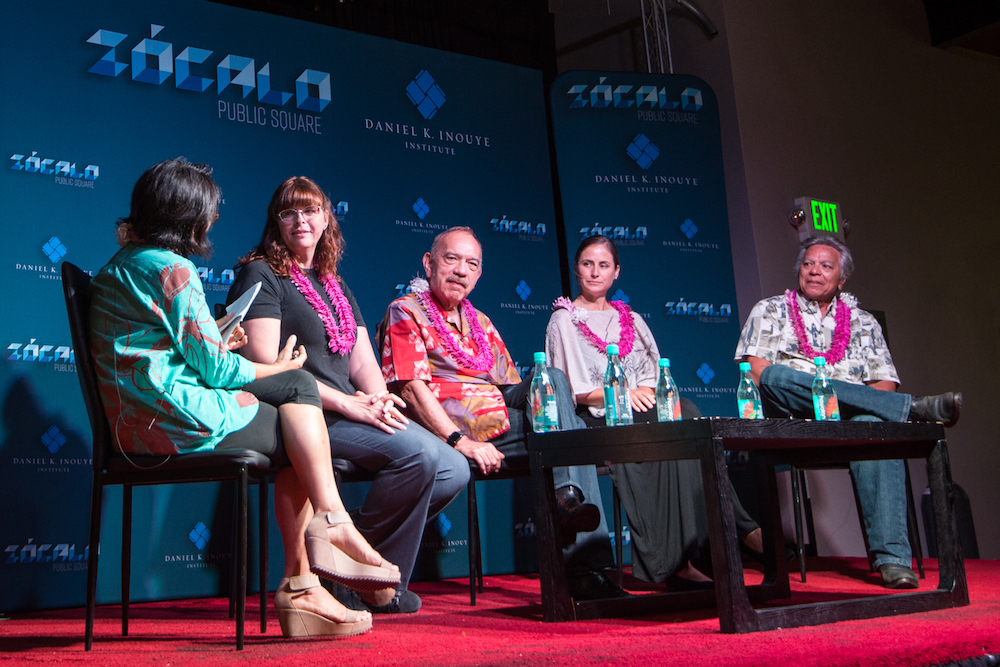 The origins of the Hawaiian pidgin language reflect the history and diversity of the islands. First used in the mid-19th century by the sugarcane laborers who spoke Japanese, Chinese, Portuguese, and English and needed a way to communicate with one another, today, the language is common across the islands of Hawai‘i. Recently, some vocabulary—hammajang, for example—has been entered into the Oxford English Dictionary.

The history, modern-day usage, and future of Hawaiian pidgin was the topic of discussion for a Zócalo/Daniel K. Inouye Institute “Talk Story” event titled “Will Pidgin Survive the 21st Century?” which took place before an overflow crowd at Artistry Honolulu in Honolulu, Hawai‘i. The panel’s moderator, Noe Tanigawa, arts and culture reporter for Hawai‘i Public Radio, began the evening by asking the four panelists about the language’s history.

California-based sociolinguist and scholar of American pidgins Sarah Roberts explained that while the language really took off at the same time as the sugar plantations—around 1877—the first written evidence of the language that she has come across was a text from 1791. Later, in the 19th century, two forms of pidgin coexisted—one based on the Hawaiian language, which is what was first used on the sugarcane plantations, and one based on English, which began to thrive after the Hawaiian monarchy was overthrown in 1893 and English became the dominant language of the islands.

But pidgin is much more than its vocabulary, said former Hawai‘i Governor John D. Waiheʻe III, the first state governor of Hawaiian ancestry. Waiheʻe grew up on the Big Island, and after he jokingly expressed his anxiety over whether the two scholars of Hawaiian pidgin sitting to his right and left would correct his pidgin the way teachers used to correct his English in school, he explained that pidgin “was everyday language,” and “expressed a kind of culture.”

While some graduates of the exclusive Punahou School might “go before a local crowd and try to speak pidgin” and pronounce the words perfectly, Waihe‘e said, it’s the intonation in how pidgin is spoken and the way the sentences are structured that really help to convey a speaker’s meaning. Pidgin, he stressed, also expresses a value system. And here, the governor pointed to a few phrases: “more better,” “some more better,” “or a little bit less more better.” These phrases, he believes, reflect the Japanese influence on Hawai‘i’s culture. “It’s our way of saying something modestly that’s enormous.”

Tanigawa asked the panelists about how speakers alternate between languages—a phenomenon sometimes called “code-switching”—in pidgin. Co-director of the University of Hawai’i Sato Center for Pidgin, Creole, and Dialect Studies Katie Drager explained that many pidgin speakers are able to turn their pidgin “on and off.” And even within pidgin conversations, they can make the pidgin “heavier,” based on whether or not they are talking to someone who is local or a close friend. One of the problems she faces in her research, she said, is that “one of the ways to get people to turn off pidgin is to take them to a university.” This makes it difficult for researchers like herself to get the data she needs to study the language as it’s really used.

But pidgin is much more than its vocabulary, said former Hawai‘i Governor John D. Waiheʻe III, the first state governor of Hawaiian ancestry; it is “everyday language,” and expresses “a kind of culture.”

Comedian Andy Bumatai’s first introduction to pidgin came when he was a small boy and overheard his father, who was in the military, speaking pidgin with his friends. At the time, he dismissed it as “weird baby talk.” But when he was in third grade his family relocated to Hawai‘i, and he realized that “the whole state talks like that!” He began to see pidgin as a way to identify people like himself. In his comedy acts, he said he often includes a bit where he describes a scene where he goes to a Starbucks on the mainland and sees a “braddah” behind the counter and doesn’t know “if he’s local or Mexican,” so he “throws out small-town pidgin to see if he bites.”

What does it say about Hawai‘i culture that pidgin is a combination of so many different languages? Roberts explained that what we refer to as pidgin is linguistically categorized as a creole, “which means it’s a native language.” “People speak it in the home,” Roberts said.

And through the process of pidgin becoming a native language, grammatical structures from Hawaiian, Chinese, Japanese, and Portugal enriched it, giving the language a conceptual richness. Tanigawa pointed out that one structure that’s borrowed from Portuguese is the use of “stay” before a verb to imply a continuous action. The meaning holds steady even when the word “stay” comes before “go,” as in the pidgin phrase “stay go.”

Complicated ideas can be communicated in pidgin, Bumatai said, relaying a story about sitting behind Governor Waiheʻe on a flight some years ago, and hearing Waiheʻe speak with a colleague about important matters of state entirely in pidgin. In addition, state officials frequently make speeches in English while using intonation and sentence structures to provide nuances that pidgin speakers will hear.

Even using single words of pidgin in an English context can create cultural common ground, said Waiheʻe. He recalled a speech he heard late U.S. Senator Daniel K. Inouye give about his experience in World War II in which he said “when the [the war] was all pau, I think I made my father proud.” Here, Waiheʻe said, Inouye was doing two things: using the pidgin word “pau” which means finished, to indicate to those in the audience in the 442nd Infantry Regiment that he was one of them, and using the phrase “I think” rather than “I know” to show that he is part of the Hawaiian value system that privileges humility.

One of the strengths of pidgin is its ability to hint at what is unsaid, said Drager. She explained that sometimes English speakers who move to Hawai‘i might say “more than they need to say” and “name people they don’t need to name,” which puts them at odds with a culture that deeply values humility.

“A language that doesn’t change is a dead language,” Roberts said, and the fact that old words have fallen out of favor and new ones have entered the lexicon indicate that pidgin is not only alive but evolving in the 21st century.

Later during the question-and-answer session, an audience member who works in the hotel industry described pidgin as the “lingua franca” of Hawai‘i, and asked the panelists if they thought of pidgin as more of a blue-collar language. Waiheʻe thought that he had actually seen somewhat of a renaissance for pidgin across social classes, as people who now work in white-collar jobs will often use pidgin phrases as a way to show their pride in their own blue-collar background.

It’s not only the upper class in Hawai‘i who are trying to incorporate more pidgin into their daily vocabulary. Drager said “Califriscans” also have tried to add in some pidgin phrases though they often get the pronunciation wrong.

Bumatai, who runs a YouTube series called “Daily Pidgin,” said that when he started the series, people would ask him “What’s the best way to practice my pidgin?” And he would say “At home, by yourself,” which got a lot of laughs from the audience. He jokingly suggested to those trying to learn pidgin to start with one syllable words like “pau.”

There’s also another good reason to learn pidgin. Roberts said that at the University of Hawai‘i at Hilo, textbooks incorporate pidgin in order to teach the Hawaiian language to students. She explained that the mistakes that students make while learning Hawaiian are often due to the fact they are thinking in standard English, but when they gain some knowledge of pidgin, they find it easier to learn Hawaiian.

So what is the future of pidgin? Bumatai said that now that pidgin is recognized as a language, Hawai‘i’s pidgin speakers should proudly claim their bilingualism. Drager explained that pidgin is actively taught and studied at universities, and that students can submit papers in pidgin in Hawai‘i. And while some pidgin words have faded out of daily conversations, this fact is actually an indication that pidgin is alive and well. “A language that doesn’t change is a dead language,” Roberts said, and the fact that old words have fallen out of favor and new ones have entered the lexicon indicate that pidgin is not only alive but evolving in the 21st century. 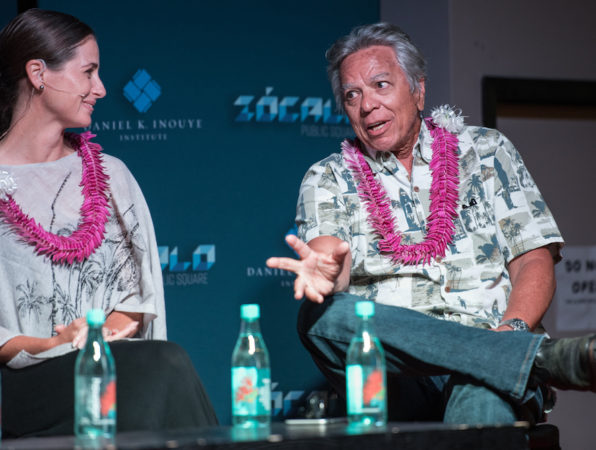 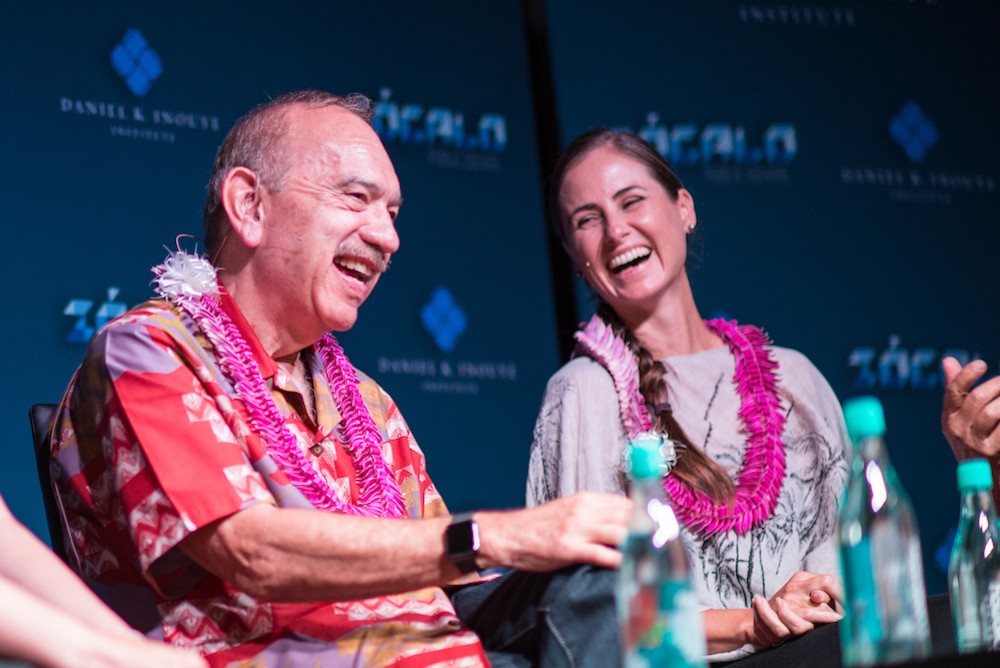 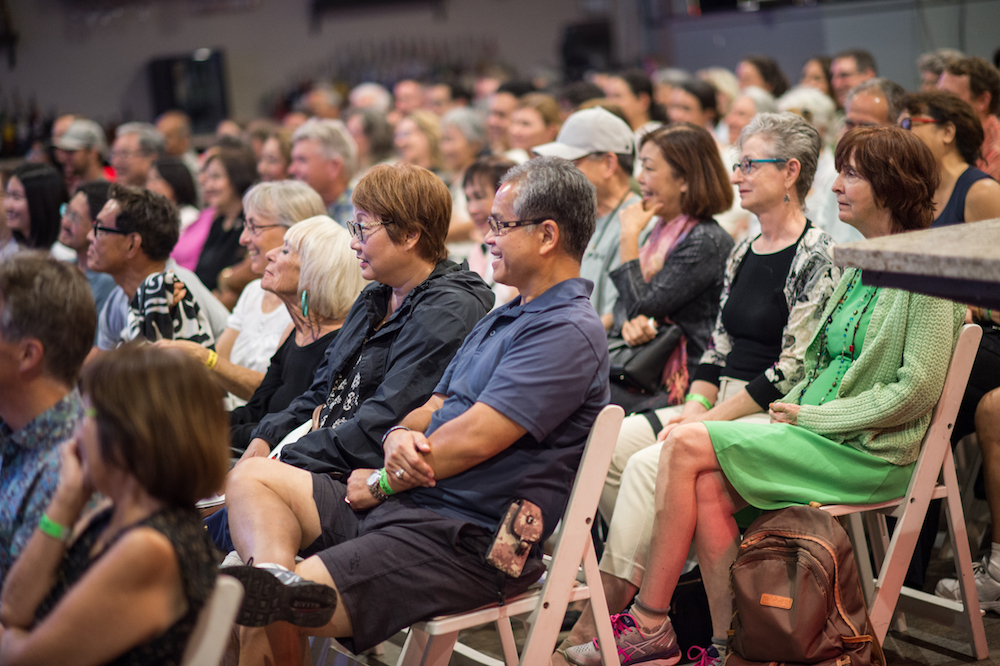 A full house at the Artistry Honolulu in Kaka'ako. 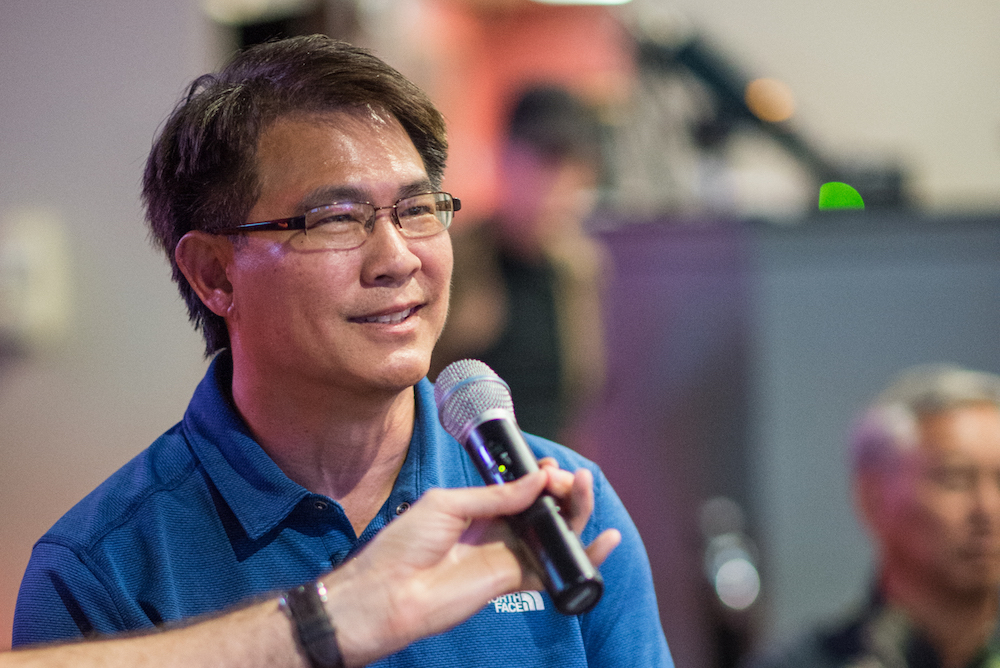 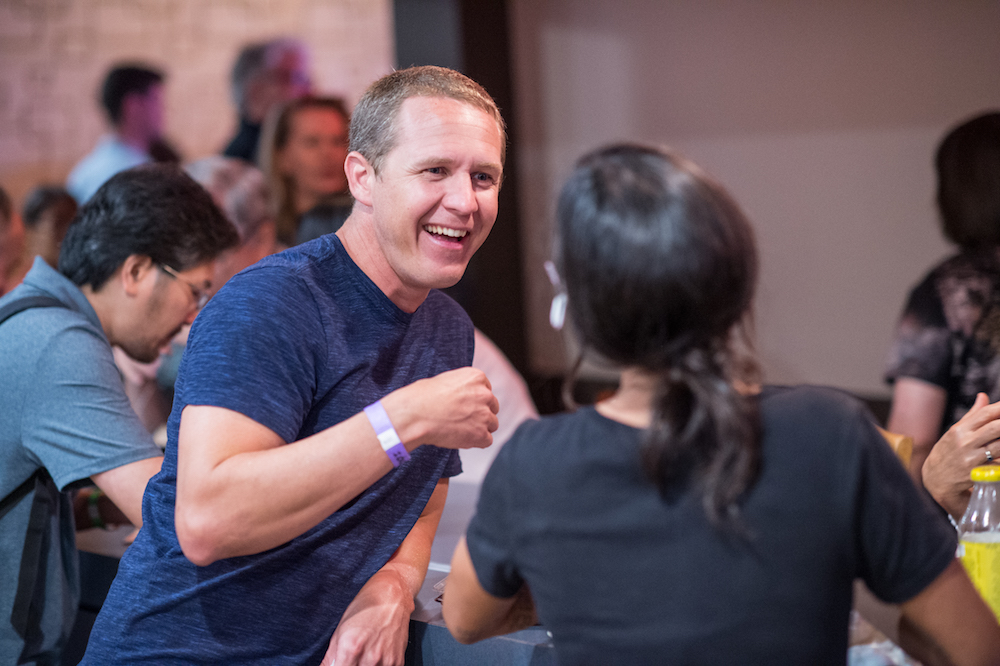 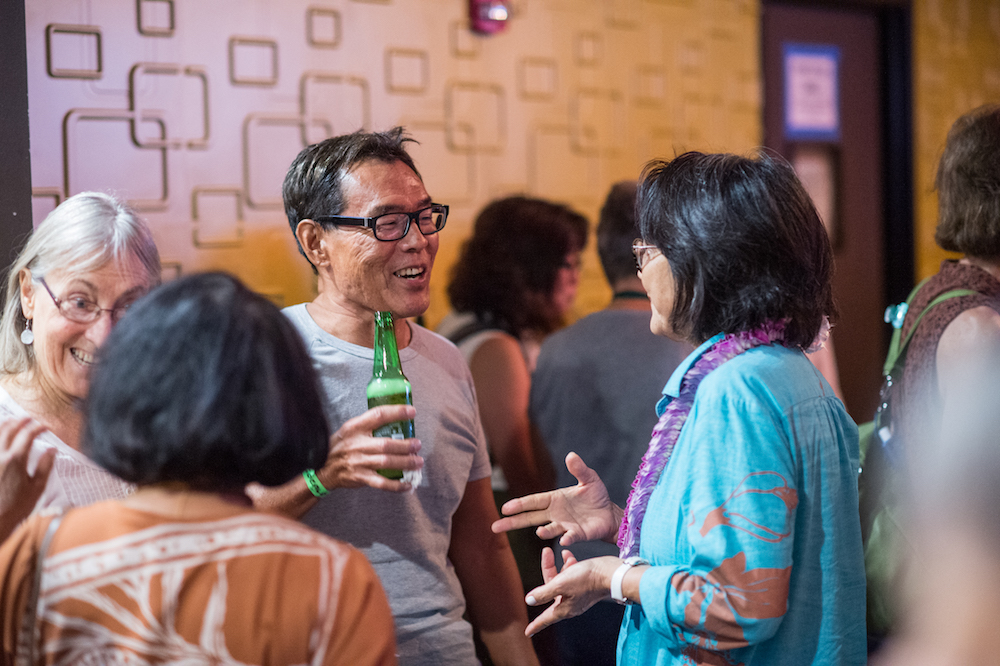