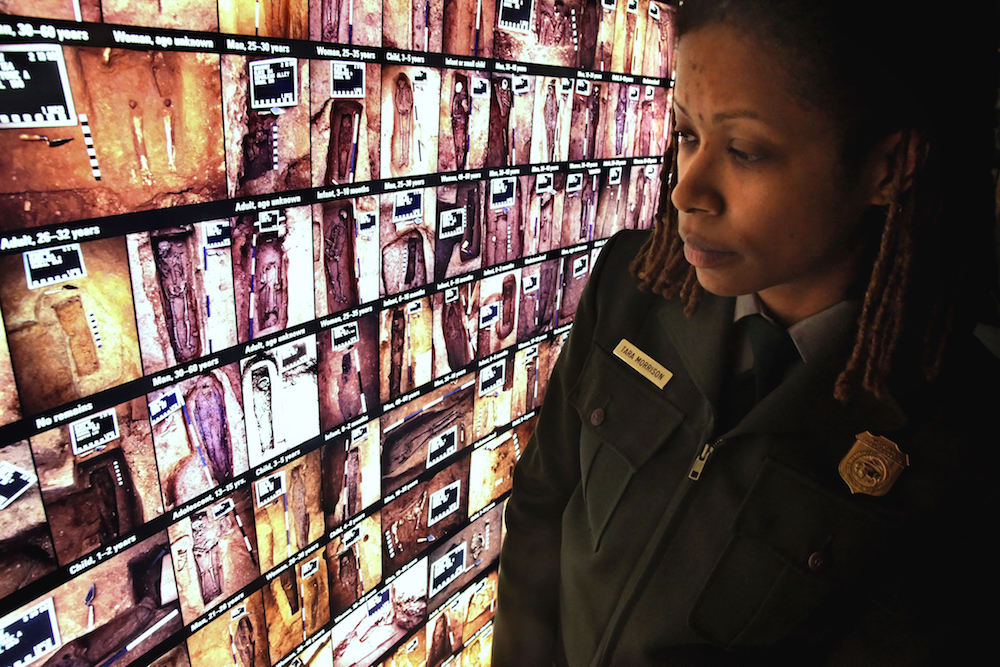 Tara Morrison, superintendent for the African Burial Ground National Monument, reviews the "burial wall" of 419 individual excavations at the visitors center for the monument, which opened in New York in February 2010. Courtesy of Bebeto Matthews/Associated Press.

Soon after the American Revolution, Philadelphia was the temporary capital of the United States. From 1790-97, President George Washington lived in a large house a block from Independence Hall, in what is now Independence National Historical Park. The house was torn down in 1832. Most modern-day Philadelphians knew nothing about it until recently.

That changed in 2002, when Independence National Historical Park was undergoing renovations, and a freelance historian named Edward Lawler Jr. published an article about the house and its residents—including nine enslaved people Washington had brought with him from Virginia. An intense dispute broke out about how to tell the story of the people who lived and worked in the house. National Park leadership said it would confuse visitors to tell the story of slavery a stone’s throw from the new Liberty Bell Center, with its emphasis on freedom. Local citizens groups, including one called the Avenging The Ancestors Coalition, historians, and city officials disagreed, and fought back.

Many people in the Philadelphia area were surprised by the discovery. They mistakenly believed that slavery had always been illegal in Pennsylvania, and that the state’s large Quaker population had always been abolitionists. In fact, slavery was commonplace in Pennsylvania during the colonial period, and until the 1770s Quakers, who were among its wealthiest citizens, were also among its largest slave owners.

I, too, was taken aback. How was it possible that I had no awareness that slavery had been widespread throughout the American North? I had attended public schools in New York, a state in which 12 percent of the population—about 20,000 people—were enslaved on the eve of the American Revolution. I was a professor, and had read widely on race in the U.S., teaching courses such as “Race and Ethnicity” and “Ethnic and Racial Conflict.” I had recently written a book examining cultural conflicts in which material interests take a back seat to symbolic gestures of identity formation, including the Confederate flag controversies in three Southern states, the headscarf battle in France, and language conflicts in Quebec and Spain.

This new conflict, only a short distance from my home, looked similar to me. It was also part of a larger puzzle about why slavery in the North almost completely disappeared from collective memory, virtually invisible in its museums, monuments, memorials, school curricula, public discourse, or historical sites until recently. Most of the people who spoke of slavery here were some historians and Southern white heritage groups who viewed it as evidence of Northern hypocrisy. The dispute over how to tell the story of the first president’s house became the full focus of my research. I wanted to understand why we had forgotten this part of our history—and I discovered I wasn’t alone. In recent decades, many Americans in the North, black and white, have begun to rediscover the history of the slavery that once was common in the region.

Despite the widespread belief that slavery in the United States was almost exclusively a Southern phenomenon, the institution existed in all the early colonies and first states. Slavery first arrived in New York in 1626, in Massachusetts in the late 1630s, and in Portsmouth, New Hampshire, in 1645. Before 1700 there was no colony where it was absent. Tens of thousands of enslaved people in the North lived and worked on small farms or in towns and cities, where they were skilled craftsmen, laborers and domestic workers. On large farms in the Hudson River Valley, the Narragansett region in Rhode Island, and eastern Long Island, enslaved people grew food crops and raised animals that were traded to islands in the Caribbean to feed the enslaved people there who grew and processed sugarcane on large plantations. Between the late 17th and early 19th centuries, Northerners from Rhode Island, New York, and Boston were the largest North American slave traders, and the wealth they earned produced the country’s early elite and funded the region’s first industries and universities.

Slavery ended very gradually in the American North, tapering off after the Revolution and only fully disappearing in 1865 with the passage of the 13th Amendment. Northern gradual abolition laws typically freed the children of enslaved women born after the laws’ passage but only after those children had worked for their owners for between 21 and 28 years. Once out of bondage, free blacks in the North were hardly equal citizens. Few could vote. Whites often refused to work with them in factories, and many of the formerly enslaved lacked the skills for jobs in the emerging industrial economy. They suffered from discrimination and racist violence, and frequently had little choice but to accept long-term indentures from their former owners. In many cases, their lives often hardly changed from when they were enslaved.

In my earlier academic work, I had studied collective memories, arguing that they are built and transmitted through three elements: narratives people tell about the past; ritual expressions and enactments of these stories through public holidays, monuments, and culture including movies, literature, and music; and public and commemorative landscapes that range from simple historical markers to elaborate memorials and historical sites. When it came to the history of slavery in the North, all three of these were almost completely invisible until recently.

Despite the widespread belief that slavery in the U.S. was almost exclusively a Southern phenomenon, the institution existed in all the early colonies and first states. Slavery first arrived in New York in 1626, in Massachusetts in the late 1630s, and in Portsmouth, New Hampshire, in 1645. Before 1700 there was no colony where it was absent.

There is no single reason why the collective forgetting took place. Likely explanations include attrition of memory, where people with direct memories of Northern slavery died without passing the stories along; the modification or destruction of sites once associated with slavery, like President’s House; and the reframing of narratives about the past in ways that omit elements that made people and communities embarrassed or uncomfortable.

It is hard, too, to pinpoint the moments when the collective forgetting took place in different communities. In many places in New England, there was an explicit effort to downplay slavery’s significance. Political leaders and authors often argued that the enslaved in the North were always few in number, and that they were not treated harshly. Sometimes their existence was erased. In Little Compton, Rhode Island, for example, mid-19th century town officials who recopied town records sanitized and omitted evidence of slavery. After the Civil War, Northern politicians continued to emphasize slavery as a Southern institution—rarely, if ever, acknowledging its earlier existence in the North as well.

Similarly, there’s no single best explanation for why and how Northerners like me “rediscovered” slavery in their past. In a kind of snowball process, discoveries about the past in one place have motivated people in other places to examine their own local histories, turning up evidence of once forgotten people and communities.

Until very recently, for example, no one knew about the 18th-century African Burial Ground in lower Manhattan, located outside the city walls at the time, which is estimated to contain the remains of 15,000-20,000 enslaved and free people. It was discovered in the early 1990s, during the mandatory archaeological excavation prior to construction of a new federal General Services Administration building. The area had been actively developed and redeveloped since the early 1800s, so archaeologists assumed they would turn up little of historical significance. But soon after they began, the dig found intact human remains; archaeologists removed those of 419 people for further study.

The black community in New York, alarmed by the way the remains were handled, demanded that further excavation end so that “the ancestors could rest in peace,” and asked that a team of African-American archaeologists take over the project. After a battle that included threats from the Congress to end funding for the GSA building, they got their wish, and forensic archaeologists from Howard University spent more than a decade analyzing the remains. They discovered that the enslaved New Yorkers probably came from West Africa, and noted the large number of infants and small children buried at the site. They documented damage to the bones and muscles of adults who had clearly eaten poorly, and worked very hard, during their short lives.

In 2003 a cortege bearing the remains of the 419 people returned to New York from Howard, stopping for ceremonies at African-American churches in Baltimore, Philadelphia, Newark, and New York. The remains of the deceased were carefully reinterred on the memorial site, and in 2006 President George W. Bush declared the site a national monument. Today it is filled with art, and incorporates a magnificent memorial and a National Park Service Visitor Center that recounts the story of slavery in New York. It took the GSA, the National Park Service, community activists, and the city almost 15 years to decide how to memorialize the site.

The process of rebuilding a collective memory of slavery in Northern states through commemorative landscapes has continued throughout the Northeast. Old homes where enslaved people lived and worked, such as the century Royall House in Medford, Massachusetts, and Cliveden in Philadelphia have been transformed into public historical sites that now recount the story of past enslavement. Abandoned and overgrown burying grounds where enslaved people—and later free blacks—were buried were also restored. The slave market that operated on Wall Street in New York is now commemorated with a historical marker, as is one in Philadelphia

When it came to the site of the President’s House in Philadelphia, the House of Representatives directed the Park Service to find a suitable way to commemorate the enslaved members of Washington’s household in 2003. However, the process produced raucous public meetings, prolonged fundraising efforts, a competition for site designs, an archaeological excavation, and intense disputes about the content of the information panels to be placed on the site, which finally opened to the public in 2010. The conflict showed how unresolved Americans remain about the darker elements of our past—especially when past heroes, such as Washington, peer out of the shadows.